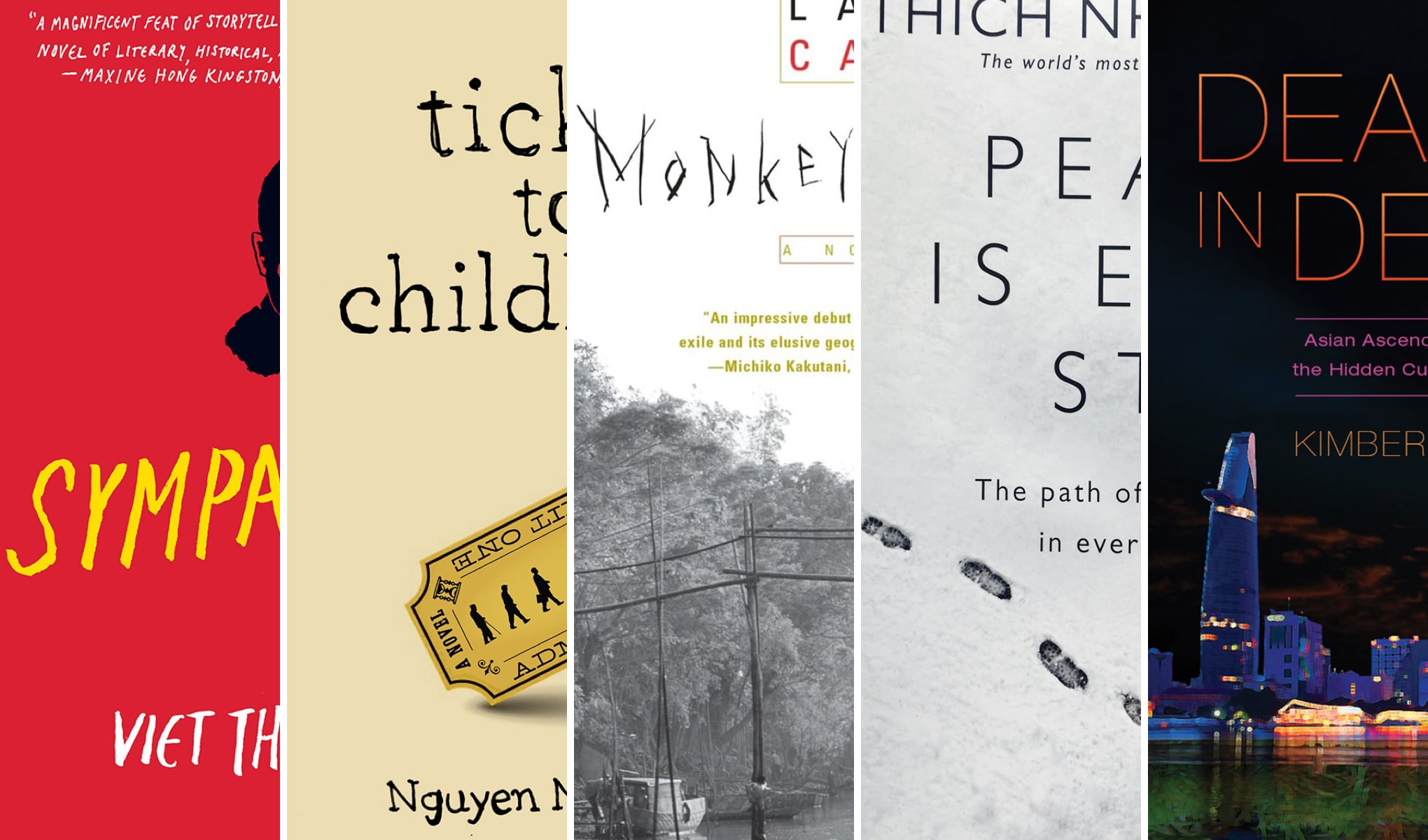 From colonization to civil war to reunification, Vietnam has undergone a great deal of cultural fracturing and coming together to build its local and overseas community in a number of novel ways. Modern Vietnamese identities emerge as complex as the history that precedes it.

The stories of the following authors show that while each individual’s experience is unique, it also joins many in creating narratives of pain, migration, love, internal unrest, and generational gaps.

Many books written on the Vietnamese experience while fictional, are autobiographical from author’s lived experiences of war, foreignism and the attempts to reconcile the damages of emotional and physical conflict.

The Symphatizer by Viet Thanh Nguyen

“So it was that we soaped ourselves in sadness and we rinsed ourselves with hope, and for all that we believed almost every rumor we heard, almost all of us refused to believe that our nation was dead.”

Viet Thanh Nguyen is the first Vietnamese-American to win a Pulitzer Prize for The Sympathizer. Focused on the irreconcilable dualities that everyone struggles to come to terms with, Nguyen creates a protagonist that is a spy for South Vietnam and simultaneously, a war refugee in America. Nguyen does not withhold descriptions of the travesties of the Vietnam War, detailing the horrors of wartime with complexity and a nuanced perspective. With a profundity that only accompanies tragedy, The Sympathizer deals with romance and alliances in dark and powerful ways.

The author directly challenges the predominant narratives of the Vietnam war, to “de-Americanize the portrayal of the war” and “compels us to look at the events of 40 years ago in a new light” as the New York Time Book Review states.

Nguyen is currently a professor of American studies at University of Southern California, with other notable books like The Refugees and Nothing Ever Dies: Vietnam and the Memory of War. 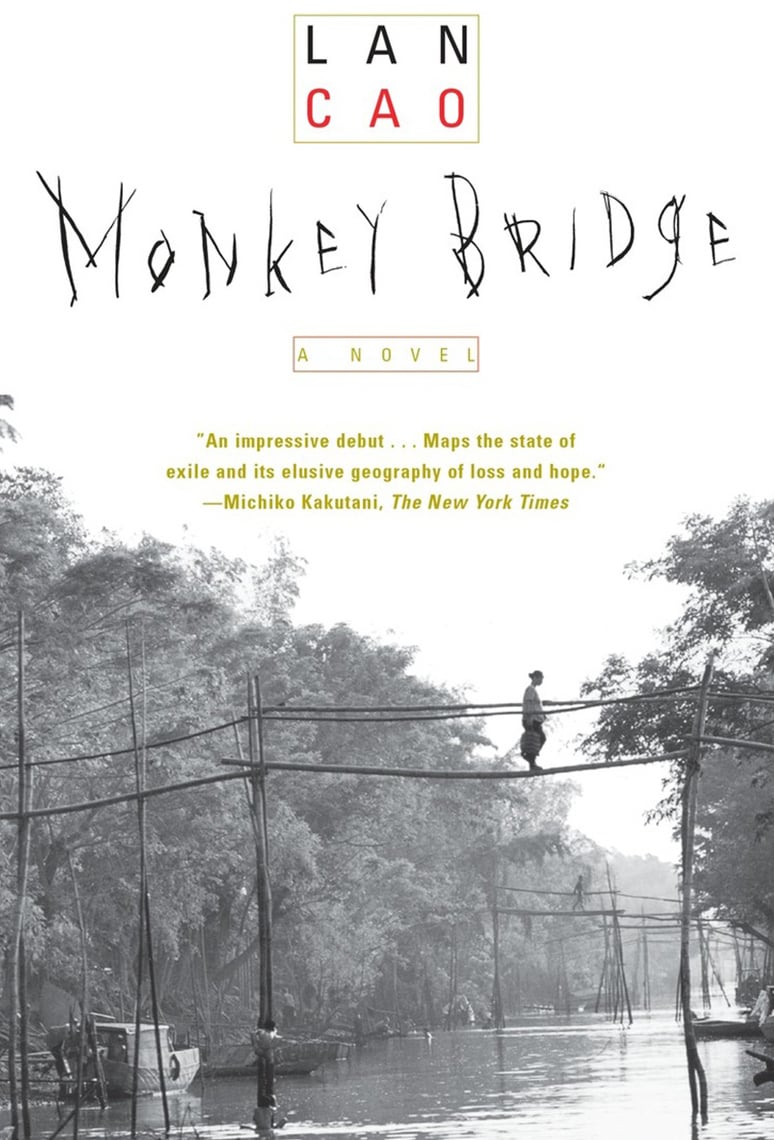 “Love that takes over, a love that is exquisite and terrifying at the same time, a love that inhabits a mother’s heart completely and sets it in a tangled and frantic motion the moment her child is born. You became the most tender part of me, the part I didn’t think could possibly exist, and my primary concern became your well-being and your safety”

Monkey Bridge is a fictional story told from dual narrators’ perspectives, a mother and her daughter, who had fled Vietnam after the Fall of Saigon. The family undergoes a series of tragic events that lead Mai, the teenage daughter to uncover unexpected truths about her mother’s past and the identity of her father. Lan Cao weaves a gripping story around the great sacrifices mothers make for their children.

Lan Cao’s message that the tragedies of Vietnam still follow individuals even after they have resettled in other countries is one that is relevant to the three million Vietnamese people living overseas. The book offers a glance into the nature of gender and family roles in Vietnam, while also skillfully contrasting experiences of the two women finding a new life in America.

Peace Is Every Step by Thích Nhất Hạnh

“When you begin to see that your enemy is suffering, that is the beginning of insight.”

Peace is Every Step is a compilation of commentaries and meditations, personal anecdotes, and teachings from world-renowned Zen master Thích Nhất Hạnh , with the intention of encouraging individuals to develop a sense of peace from within.

He provides insightful guides on how to be aware of their body and mind through conscious breathing and integrating this mentality into everyday life activities, such as cleaning or driving a car. Thầy (teacher) Thích Nhất Hạnh has put forth the goal of renewing Buddhism and helping people find peace in every walk of life. During the Vietnam War, he encouraged Buddhists to go out and help those affected in war-torn regions, on both sides of Vietnam.

After become a political exile, he built a monastic community, Plum Village in France where he now resides, holding talks and retreats. His teachings have reached tens of thousands of people around the world and he has published over 100 books including Living Buddha, Living Christ and The Miracle of Mindfulness. Thích Nhất Hạnh is one of the post influential political and spiritual leaders of our time, and his teachings on mindfulness have a timeless relevance.

“Sometimes, for our own reasons we make up a story about our past, and keep repeating it until we can’t remember that we made it up, and if we continue to tell the same story over and over,we end up believing it.

Nguyễn Nhật Ánh’s novel has sold more copies than any other book in modern Vietnam. Ticket to Childhood is lauded for relatable and touching depictions of childhood that remain timeless through generations. Though he recounts uniquely Vietnamese aspects of growing up, he captures child-like sensibilities with a preciseness that any individual who has crossed from being a child to an adult can resonate with.

The narrator of Nguyễn’s novel is a young man who offers vignettes of the creativity and depth his 8-year-old self-experienced, showing accessing childhood as an adult is not always straightforward, offering philosophical tidbits on the illogical nature of adulthood. Nguyễn resides in Hồ Chí Minh City and has had several of his works translated in to English and adapted for film.

“These economic transformations, I discovered, were tightly woven in the social and cultural fabric that structured many of the relationships inside the bars I studied…It was through these grounded interactions that I came to understand how the intimate relationships formed within different segments of the sex industry were embedded in the dramatic political and economic transformations occurring not only in Vietnam but also around the world.”

Kimberly Kay Hoàng’s book gives a comprehensive macro-level analysis on Vietnam’s economic changes combined with detailed insight on an aspect of Southeast Asian culture that is too often stigmatized and overlooked in reporting, the underground sex economy.

Hoàng describes how the rapid economic expansion of Vietnam from foreign investment in Vietnam, nicknamed the new “international goldmine” has led to changes in Ho Chi Minh City’s social landscape, with a focus on the pervasive, yet behind-the-scenes interactions with sex workers and businessmen.

What’s more, Hoàng gives accounts of her own ethnographic experience working at 4 different hostess bars over five years, capturing the lives of individual women involved in the industry.

In her book, she highlights connections to Asia’s rise in the global realm, negotiations of failed masculinities, and the brokering ability of women as sexual capital— a provocative and surprising read.