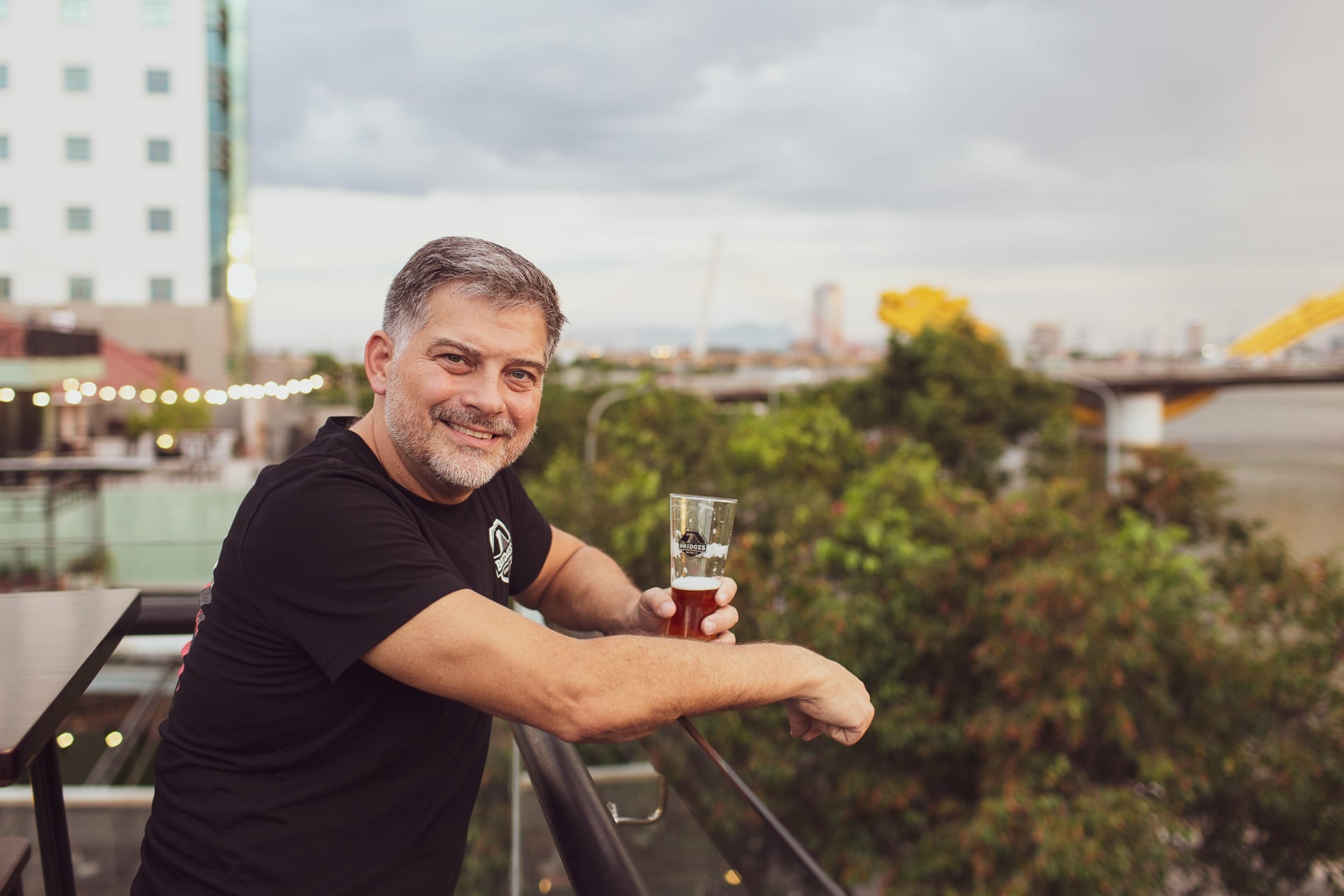 7 Bridges Brewery is the first of its kind in Danang. Although the city is late on the craft craze, 7 Bridges plan to convert new fans to craft beer in the city through cooly decorated Art Deco labels and a conscious approach to the consumption and sale of beer. The company plan to bridge business and social causes with a range of “good brews” made in collaboration with environmental and social groups.

“We are an impact brewing company, we focus on sustainable social and environmental change, and by the way—we make great beer,” founder and CEO Stanley Boots begins.

Vietnam is one of the top beer consuming countries in the world per capita, with growth above 7% per year. Premium beer consumption in Vietnam more than doubled between 2011 and 2016. With the craft scene centered around Hanoi and Saigon, besides 7 Bridges Brewery’s CEO Stanley Boots, we spoke to brewer Darren Provenzano, and production manager Michael Hardy about their passion for craft and ambition to do good after founding the first craft brewery in Danang.

How did your passion for craft beer begin?

Stanley: I went to law school in Oregon which exposed me to a world of craft beer—the town had 39 breweries with around 70 varieties of beer. Nearly every night after school I was at the pub “studying.” That’s when I fell in love with craft.

Darren: Living in southern California, it was all about wine. Then I got into Belgian beer before starting to delve into craft beer. I think that for a brewer, transitioning from wine to craft works well. If you taste my brews you will see that many lean towards the hoppier side but without a heavy bitter bite, while the aromatics are pulled from the hops.

How would you describe the 7 Bridges brewing philosophy.

Stanley: We made a clear decision to create flavors that matched this environment and to strike a balance between both European and American Craft styles. A good example is our Vietnam Red Ale—it’s a distinct blend that uses European malts and strong American hops. So instead of calling it an IPA we’re calling it a VRA.

A year ago our beers were more European-focused because we thought that’s what the Vietnamese market would prefer. We tip our hat to Heart Of Darkness for really pushing hop-forward beers. We saw the market respond really well to their style and that helped encourage us to approach our brewing with a more liberal mindset. Once Darren came on board, we began to play with hybrids. We went from using only six varieties of hops to twenty-four!

What’s the concept behind the 7 Bridges Brewery brand?

Stanley: There are two different “bridges” we are building. We want Vietnamese drinkers to fall in love with craft. And we also want the industry to grow in a way that is both socially and environmentally sustainable.

Social and environmental outreach are a core value in your business. Tell us more about that.

Stanley: It’s easy for a company to give a percentage of its profits back to a good cause. I was raised to believe that your main purpose in life is to give back, but simply dishing out money to charities isn’t enough. It needs to be streamlined into your business model from the ground up—it’s a powerful, fast, and action-oriented way to help. From the beginning I had the desire to build charitable projects into the core of our business. For us, it’s not just what we brew, it’s what we do.

What are some community projects you’re currently involved with?

Stanley: 7 Bridges Brewery has pulled together two coalitions to release a new environmental beer series called “The Good Brews.” The soon-to-be-announced coalition involves a key food and beverage player in Vietnam, an international wildlife conservation group, a Vietnamese plant conservation group, and a Danang City research institute. The first of “The Good Brews” will be an ocean plastics focused beer, inspired by the beach conditions in Phu Quoc. The series is slated to be released by the end of summer when the coalition will officially announce the initiative strategy together.

Another project is Beer United, a beer festival in Hoi An happening on July 1st. It’s in aid of the charites Vietnam Zero Waste Alliance, Giving It Back To Kids, and the Da Nang Association of Victims of Agent Orange. These groups already raise funds by making and selling handicrafts, but we are helping to improve the quality and design of what they are offering. The idea is to have crafts that people will want to buy, not through guilt, but because they are actually beautiful. The beer is what gets people there and starts those conversations.

Michael: I don’t think that Stanley realizes how much his passion and vision drives us all. I didn’t realise what I was getting into, but the more involved I become, the more of a difference I want to make. “It’s not only what we brew—it’s what we do” is Stanley’s saying but it encompasses us all. It’s a pretty cool thing to be a part of…

Tell us about some other inspirations behind your beer?

Stanley: Our brew philosophy is to create something that is uniquely Vietnamese and that doesn’t just mean using local ingredients. Vietnam is quickly positioning itself as Southeast Asia’s number one craft beer hub. They are setting trends, and we want to be an active contributor to the scene. We have spoken a lot about our ethos but not much about product. For me, good product is a given. If you’re not making a good, interesting product then why are you doing it at all?

I’m inspired by people like Brewdog, for their ability to stand up for social issues. And Dogfish Head brewery, who make what they call “off-centered beers for off-centered people.” They are people who turn their passion into something beautiful and aren’t afraid to shake things up.

If you put your beer next to a Tiger or Heineken, how would you convince a customer that yours is better?

Michael: I don’t try to bash big beer, it definitely has a place. An easy to drink, refreshing beer on a hot night in Vietnam is great. If I want to convince someone to get into craft, I will be explaining that these beers are richer and deeper in flavor. They are also made in much smaller batches with better quality ingredients and a carefully thought out balance of flavors.

Stanley: Rather than think of it as “better beer,” the key is to explain the love and attention that goes into our brewing. It is a completely different mindset and experience than something that is mass produced. Pre-prohibition beer in the States, for example, was a completely different beast too—cask brewed with naturally occurring infections that contributed to flavors. It’s interesting that there is a movement back to older brewing philosophies now.

As a newcomer to the market, how do you compete with the established brands?

Stanley: I don’t believe that there is any such thing as competition in this market yet. Last year the US beer market grew at 0.6%. Vietnam’s overall beer market is growing by at least 7% per year with craft growing much faster. Couple that with Vietnam’s 7% GDP growth and position as the 10th largest per capita beer market in the world and you can see that craft has huge potential. For us, that growth has meant a 400% increase in brewing capacity over the last four months.

Michael: We have over 30 craft breweries in Vietnam today, and we have had the pleasure of drinking nearly everyone’s beer. It’s not about competition but being inspired by other people with the same passion as you. Even though we are alone here in Danang, we still collaborate with people in Hanoi and Saigon. We carry East West and Fuzzy Logic beers in the 7 Bridges Brewery taproom, and are happy to carry others. It makes the experience more interesting for us and our customers.

Who else should our readers be looking out for?

Stanley: Thomas Bilgram and Trong Ngoc at Furbrew—Thomas is a real MacGyver when it comes to brewing and I’ve got a lot of respect for that. It’s also worth looking at some of the cider producers like Bazan Brewing and other small batch brewers.