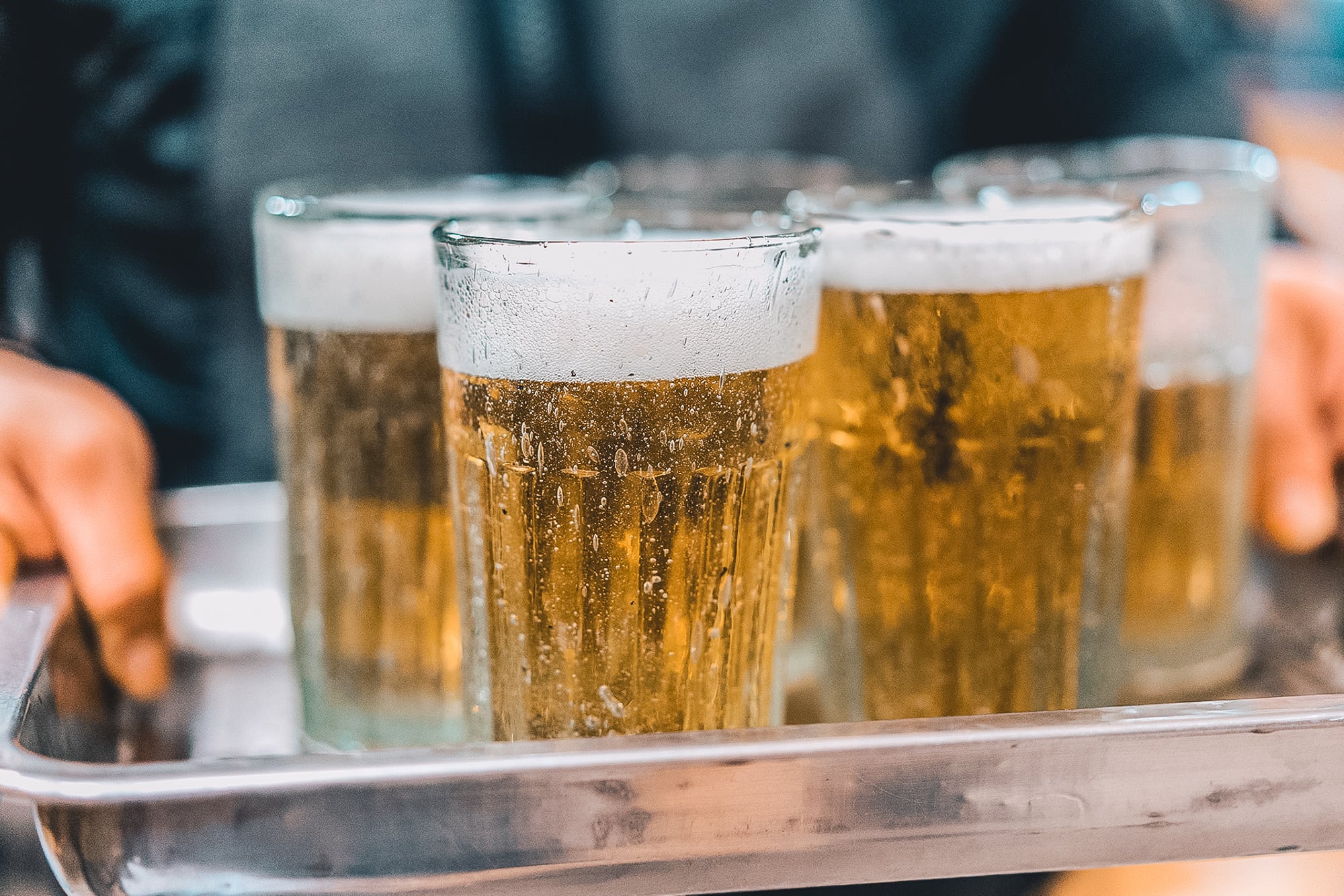 Alcohol, like many other recreational drugs, is bad for us. Although there are frequent claims that, for example, a glass of red wine a day is good for the heart, there’s usually little supporting evidence. Recent research suggests even moderate consumption of alcohol can have catastrophic health consequences.

As with the tobacco industry, “which marketed and sold their lethal product with zeal [and] with deception,” conflicting reports emerge about alcohol. Lots of the positive studies appear to have been backed by the industry itself. Impartial experts are increasingly coming to accept that “there is no safe level of alcohol consumption.” Healthcare professionals Jio Health believe this sends a stark warning about the rising rates of alcohol consumption in Vietnam. Drinkers here, on average, imbibe 42 liters of beer a year. That’s the highest level of any Southeast Asian country and second in Asia behind South Korea.

South Korea is the only country in Asia that drinks more than Vietnam. Since 2010 alcohol consumption in Vietnam has risen a staggering 40%.

Jio Health suggest that alcohol consumption in Vietnam is beginning to reach extremely dangerous levels. Globally, alcoholic drinks are a US $1 trillion industry. Here, we explore the problem of excessive alcohol intake. Then we look at the scale of alcohol consumption in Vietnam. We also look at the impact alcohol is having on the country, and identify ways to better manage drinking. Finally, we share some resources for those looking to kick the habit entirely.

The truth about alcohol and your body

Alcohol is the most ingrained recreational substance in the world. However, alcohol is also a toxic substance. In high doses, alcohol, which is also a depressant, suppresses the respiratory system which can lead to coma and death—which directly leads to 2,200 deaths in the States per year. And indirectly to more than 30,000 deaths. And alcohol is addictive. Because drinkers are unlikely to become addicted immediately, this gradual danger is often disregarded. In fact, “any exposure to alcohol runs the risk of producing addiction in some users.”

Alcohol also affects the brain, heart, liver, and pancreas. And it increases the risk of cancer. Positive information about alcohol consumption is often biased or misinformed. Take the story around red wine again—which grew from the “French paradox.” The paradox was that French people eat a rich diet with high levels of saturated fat but have confoundingly low levels of heart disease. Wine consumption appeared to be a factor…until more extensive research revealed the French diet also includes fruits, greens, grains, and lots of olive oil—like many Mediterranean countries—which are foods that promote cardiovascular health.

As the economy and middle class continue to swell, so does the rate of alcohol consumption in Vietnam—especially for beer. But the country’s affinity for beer is not a new trend. Vietnam’s domestic brewery, Hommel, was opened in the 1890s. One hundred years later, to serve a growing thirst for the drink, the company—which became the Habeco Corporation—expanded operations at its Hanoi Beer Company to 50 million liters per year in 1993…and to 400 million liters by 2010.

It’s false to say all Asians like to drink. Citizens of Singapore, Malaysia, Indonesia, and Myanmar over the age of 15 all consume below three liters per year on average. Stringent government policies and taxation, and religious beliefs are factors.

But some Asians do drink. And they’re drinking way too much. At the top are South Korea, Vietnam, and then Thailand who each drink three times more than their neighbors at the bottom of the list. As of 2016, alcohol consumption in Vietnam hit 340 million liters of spirits and 3.92 billion liters of beer. That’s an estimated 40% increase from 2010—a figure that doesn’t even factor in unrecorded alcohol sales.

The negative health effects of alcohol consumption in Vietnam

There are 7.3 million motorbikes in Ho Chi Minh City. It remains the primary mode of transport. Globally, drunk driving is regulated by strict measures on blood alcohol levels. Vietnam, officially, allows 50 mg / 100 ml for motorbikes and zero for those behind the wheel. In 2016, stricter penalties were introduced when “Drunk driving or refusal to comply with a police ordered alcohol or drug test will be subject to a fine of up to VND 18 million.” But drunk driving still kills over 4,000 people in Vietnam every year. And it’s been reported that around 40% of traffic accidents are alcohol related.

Soaring levels of alcohol consumption in Vietnam also contribute to the country’s problem with liver cancer. **Nearly 10 percent of Vietnamese men aged from 50 to 69 died of alcohol-related liver cancer in 2016. **It’s a figure that is three times higher than the global average. A 2015 World Health Organization survey revealed 77% of men questioned had drunk at least six units in the preceding 30 days. Only 11% of women had consumed the same.

Another concern is the age of drinkers. Young people in Vietnam say “drinking beer and wine is an indispensable pleasure in their life, or a way to kill time or to relieve their boredom.” Others have identified the negative impact that not drinking has on personal and business relationships. In fact, Vietnam’s binge-drinking culture is so rampant it’s even gained the attention of the international media.

Clearly, the best evidence suggests it’s best not to drink at all. However, reducing alcohol consumption can be the first step. Immediately adoptable measures are alcohol-free nights out, and alcohol-free days. As are restricting drinking to dinner, choosing low-alcohol drinks, or even better, opting for a mocktail—increasingly available in bars in Vietnam—or Vietnamese staples like some coconut juice, a smoothie, or a sugarcane juice.

Also, consider quitting completely. Simply being aware that there is a problem is viewed as a move towards successfully stopping drinking. Experts advise against viewing the reliance on alcohol consumption in black and white terms: “everybody who is drinking on a regular basis, reasonably heavily will have a degree of alcohol dependence.” And so quitting will come with varying degrees of difficulty.

When you’ve decided to take steps to quit consider telling the people around you to enlist their support. Telling friends and colleagues in advance will be much easier than announcing you’re not drinking if you’re already at an event. Also, try to avoid occasions when alcoholic drinks will be served—at least at first—and people who engage in heavy drinking or encourage you to drink. Professionals have stated the first 72 hours will be hardest. And the detoxification process can take two weeks or more.

Compared to neighboring Thailand, a haven for rehabilitation with rehab centers like the luxurious Cabin Chiang Mai, DARA Thailand, and Hope Rehab—a treatment center that takes a holistic approach to recovery—finding professional treatment for alcoholism is extremely problematic in Vietnam. The simplest way to get started is to contact Alcoholics Anonymous In Vietnam for information about joining a 12-step recovery program.

Regular sessions are held in Ho Chi Minh City, Hanoi, Danang, and Nha Trang, while meetings can be arranged in Dalat and Hai Phong. However, all sessions are conducted in English only. Literature for the 12-step program can be acquired in Vietnamese language when requested.

Jio Health advises those interested to regularly check each city’s rotating schedules and speak with a listed representative to confirm weekly dates and locations. Note that all Alcoholics Anonymous meetings are free of charge and additional contact information can be found online at aavietnam.org.