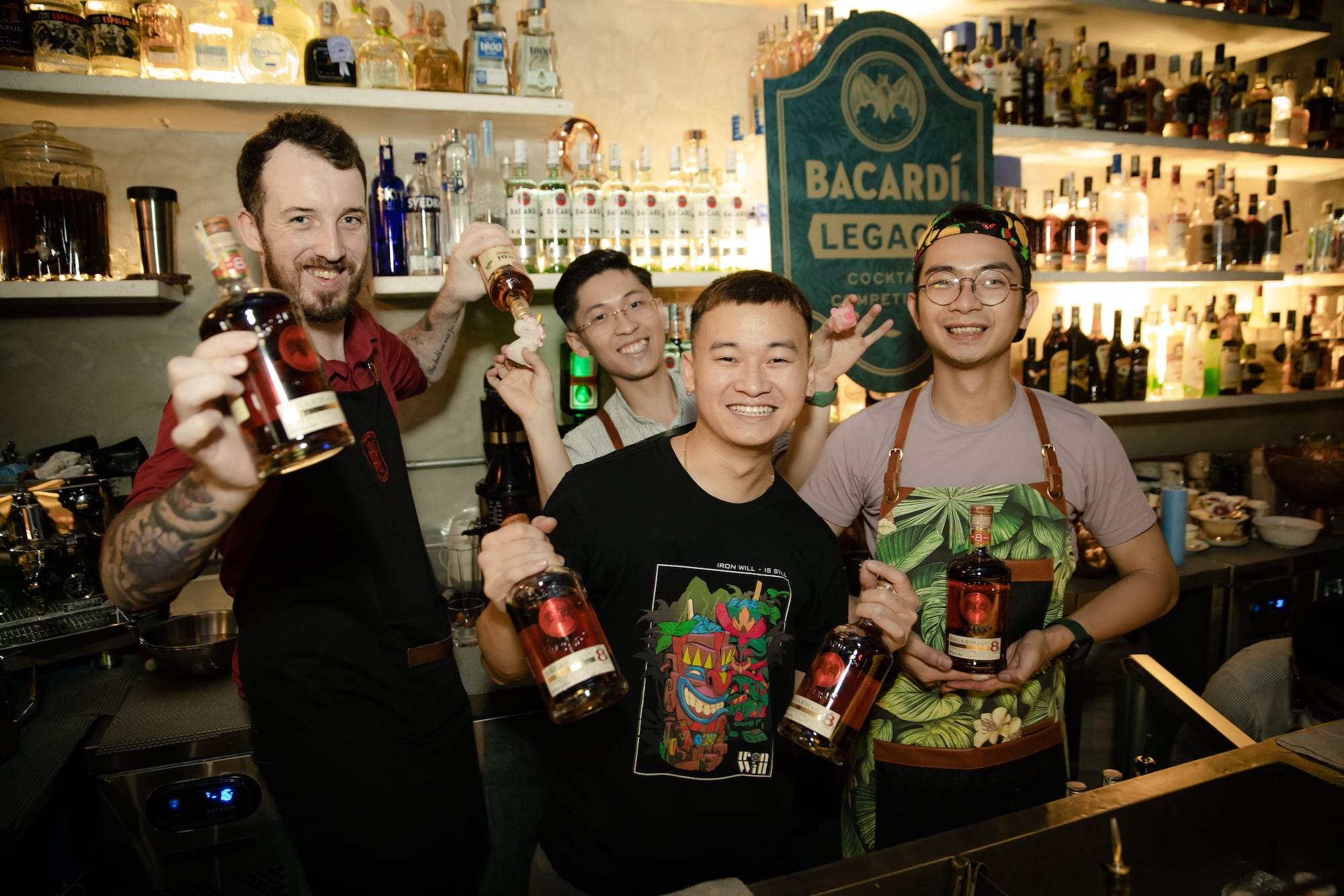 When Don Facundo Bacardi Masso distilled the first batch of Bacardi rum in 1826, he was setting the foundations for the legacy of the Bacardi family. Over 150 years, Bacardi rum remains one of the best-selling rums in the world. The best thing about this legacy is its identity and adaptability. It has allowed the Bacardi rum brand to remain popular and pass on to the next generations.

Today, Bacardi is not only a rum company, but also a foundation for the Bacardi Legacy Cocktail competition that encourages bartenders around the world to use Bacardi rum to create new legendary cocktails like the Mojito, Daiquiri, and Old Cuban. Throughout the competition, the bartenders have to answer the question: “What makes their cocktails a worldwide legend?”

In Vietnam, this is the second Bacardi Legacy Cocktail Competition to be held. So far, the competition has selected three final faces, including bartender Nguyen Tuan Anh from Ne.Cocktailbar, Vu Ngoc from ROS – Dining & River Lounge, and Sean Halse from Kumquat Tree. The three of them will represent Vietnam to participate in a competition among other Southeast Asian bartenders that will take place in the Philippines.

On January 12th, the competition organized a guest shift night at Summer Experiment so the trio could introduce their drinks to the community. On this special occasion, Vietcetera arrived early and had three talented bartenders tell the story behind their cocktails.

Nguyen Tuan Anh is currently a bartender at Ne.Cocktailbar in Hanoi. According to Tuan Anh’s description, Ne is not a luxurious place, but instead, a close and intimate community. He and his colleagues spend most of their time preparing and promoting their cocktails that are made with Vietnamese ingredients and spices.

The cocktail created by Tuan Anh was named Iron Will. “Bacardi Legacy means a legacy that one generation passes down to the next one. Iron Will is inspired by my father, who encouraged me whenever I was frustrated or did not receive support to pursue a bartender career. My dad once said, “If you want to follow this path, prove to everyone that you are going on the right way.”

Iron Will is made with simple ingredients. The key is the coffee bean. “Few cocktails in the world beam directly into coffee beans like Iron Will. Before beaming, I heat the coffee beans to extract seeds and oils, making a stronger taste for my cocktails. I also filter out big coffee grounds but leave tiny parts, which later absorb into the liquor. This technique makes the taste last longer.”

“I use Bacardi Ocho aged 8 years in oak barrels, the one with strong vanilla flavor to give creamy taste when mixed with coffee. I then blend the mixture with spicy and refreshing basil leaves. Finally, I add rum, and an indispensable ingredient, coconut. That’s why coconut syrup also appears in this drink.”

His name is Vu Ngoc, also known as Will. Although he just turned 25, Will has seven years of bartending under his belt. “ROS focuses on both food and drinks. As it specializes in fusion cuisine, there are many special and unique ingredients in the kitchen, such as pickled cucumbers, beetroot, orange jam. I have a lot of fun playing around with the ingredients to try out new cocktail recipes,” shares Will.

Like Tuan Anh, this is the second time Will joins Bacardi Legacy. Will shares with us, “simply because legendary cocktail recipes are easy. They can be made anywhere, in any country, and at any bar. That’s what Bacardi Legacy’s spirit is.”

Coming back the second time to the competition, this time Will introduces to everyone a cocktail named Veinticinco 25. About the meaning of the name, Will proudly shared: “Veinticinco in Spanish means 25. The number 25 is my biggest pride. At the age of 25, I have built my own business, become the leader of Takeover & Co, which is an organizer of the first Vietnam Cocktail Festival. Hence, Veinticinco 25 is a message of youthfulness that I want to share.”

To prepare Veinticinco 25, Will uses only a handful of ingredients: beetroot juice combined with Bacardi Ocho 8 Rum and coconut syrup, which is balanced with lemon juice and orange blossom juice. “The mixture has a soothing taste. Rum with coconut is a well-known combination, but adding beetroot juice adds a unique taste.”

Before arriving in Hanoi more than a year ago, Sean Halse had been a world-class bartender with more than 12 years in the profession. Sean, a Brit, had worked in three different continents, including the world’s top hotels such as Rosewood Abu Dhabi, Marginal Social – Intercontinental Hotel, Gold on 27 – Burj Al Arab in Dubai, and Lebua Hotels & Resorts both in Frankfurt, Germany and Bangkok, Thailand.

Sean shares with us the reason he chose Hanoi and Kumquat Tree: “I can see a great potential in Hanoi. Unlike Saigon, Hanoi is still a new market, and I want to contribute to developing the bartender community here.” Participating in Bacardi Legacy has been a new experience for Sean and its set a foundation for him to connect with more people. “I like giving away and training new talents.”

Sean brought to the competition a cocktail named Bringing Pickle Back, which was originally inspired by his girlfriend’s favorite dish. “When eating pickled cucumber, people usually eat the veggie first and then they drink pickle water. Therefore, I want to mix pickle water into my cocktail.”

With a classic mixing style, Sean believes that “a tasteful cocktail is based on its true flavor. Garnish is just a secondary element. Once the taste is good, I won’t care much about how it looks.”

Sean’s Bringing Pickle Back looks simple and modest, but has an impressive taste. Sean uses Bacardi Carta Oro Gold to build a complex taste profile for his cocktail: a little spicy, a little sweet and sour, which all combine to deliver a very strong taste. “This cocktail is zero waste, which is exactly what I value at Kumquat Tree,” shares Sean.