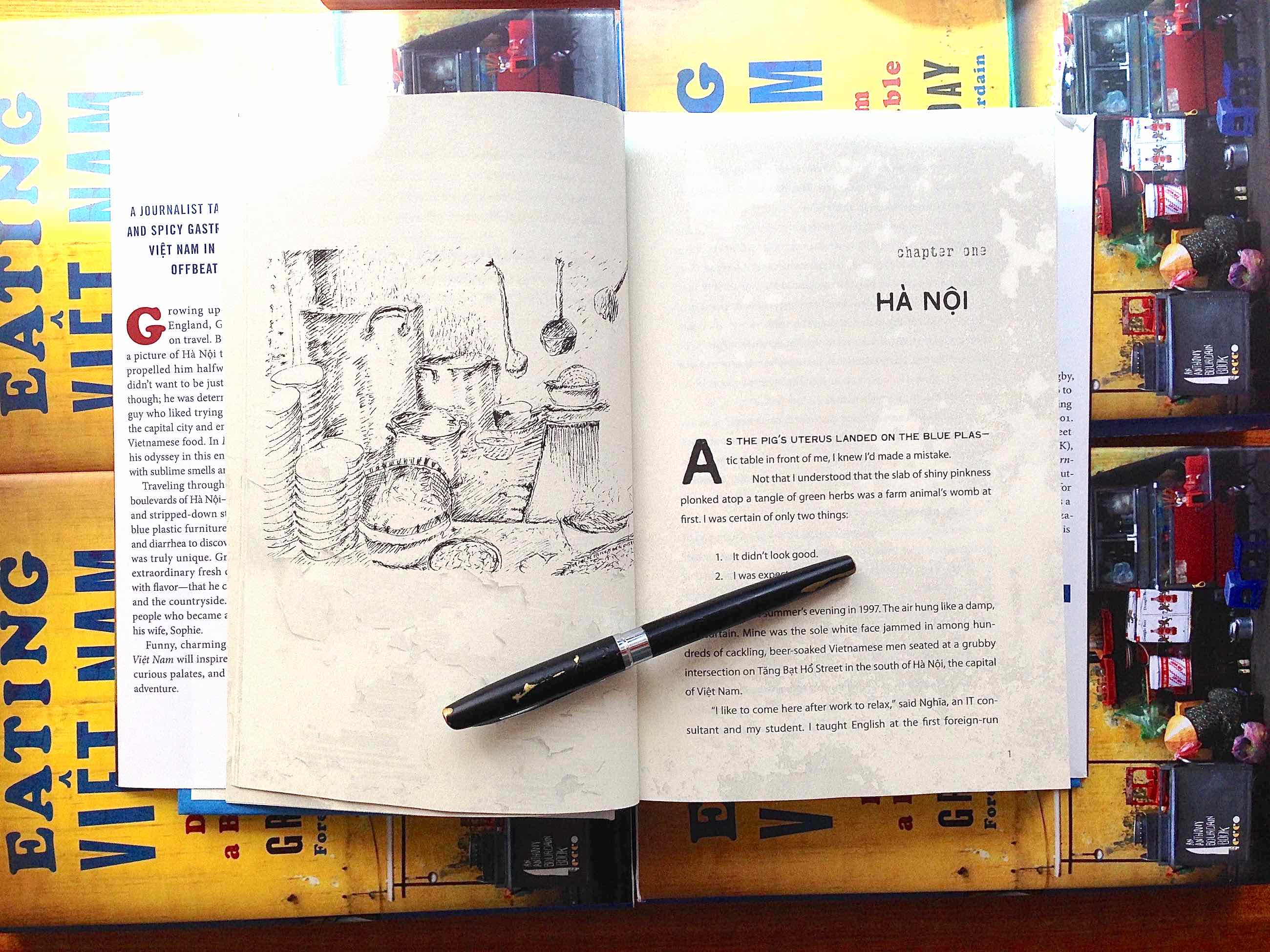 A Book Review By Izzy Pulido

“Vietnamese street food starts with noise and ends with taste, with plenty of other things going on all around you at the same time.”

Blogger-turned-journalist Graham Holliday’s first effort in the literary world, Eating Viet Nam: Dispatches from a Blue Plastic Table, takes readers on a culinary journey around Viet Nam through the lens of an autobiography.

Published in March of 2015, the book is still relatively new. Yet the book quickly became ranked as #1 in Travel Writing, Vietnamese Cooking, and Food & Wine Essays on Amazon’s Bestsellers list.

Holliday’s literary debut is not only a refreshing twist on the usual memoirs, it also tackles Vietnamese cuisine. Specifically Vietnamese street food, a highly dense and greatly misunderstood subject.

Holliday comes upon his label as a Vietnamese food connoisseur purely by chance. Armed with a pocket notebook, Holliday sets off to educate himself about Vietnam by way of its dietary habits. The results of his informal audits on the local grub are pages of assessments on a number of dishes ranging from Bun Cha (grilled pork served on a bed of vermicelli with herbs) to Bun Mam (the Vietnamese answer to gumbo).

“How could you teach something as innate as taste? I remember reading that when Gordon Ramsay decided to become a chef, the first thing he had to learn was how to taste. It was something he had never done. At least not properly. Whereas every Vietnamese person grows up learning to taste. Not just the chefs.”

Holliday is an amateur with a fine palette. He acknowledges the superior knowledge of the Vietnamese in the domain of food. Food becomes a marker for milestones in Vietnam. He opens the 350 page text with his first “fear factor” food memory: an alien encounter with a plate of wobbly pig uterus.

In the following chapters, we meet Sophie, who Holliday discerns as a kindred spirit (and eventual life companion) the moment she sips on a cocktail and immediately blurts out, who put ginger in this drink? The bartender had used the same knife that had previously butchered ginger in the kitchen before being handed down to the bar staff. 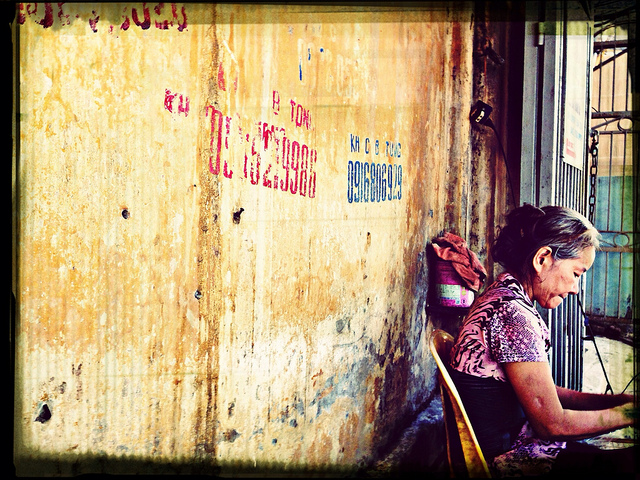 “Saigon was drowning in life. The best subjects were the ones right in front of me, and in Sai Gon, my subject, any subject, was not under my snout, but in my face, CinemaScope.”

Holliday’s relocation from Hanoi to Saigon allows for comparison on the matter that rarely exists. (Note: As a Saigonese adoptee, I am all for Southern cookery.) 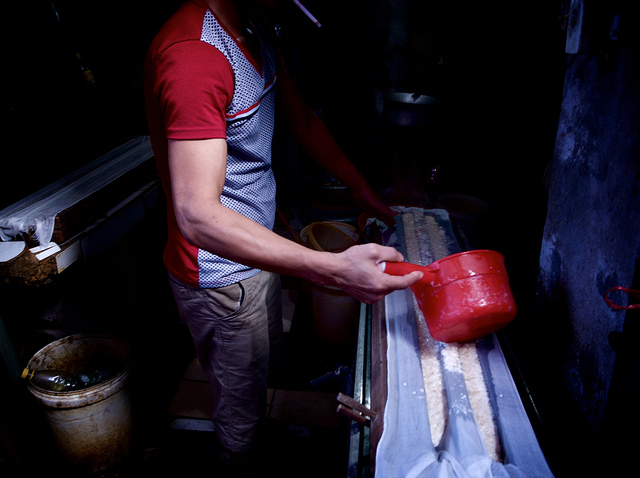 “This isn’t just about the food. It’s about history, culture, people. It’s about a way of living. Street stalls are the pulsing corpuscles of the city, and what makes it breathe. And the authorities seemed dead set on ripping out the city’s respiratory system.”

Chronicling almost a decade in Vietnam, he recounts interviews with the stall vendors that he gets to know so well. He presents the future of street food culture, writing on how stalls and public markets that feed the common folk are slowly being removed by the city to help open up the roads and sidewalks.

In every alleyway there is a family with a business operating from a living room. There are underemployed bikers sitting on neighborhood corners offering rides. There are breakfast and lunch pop ups that come and go in even the most modern streets. New spaces that dominate the Ho Chi Minh City skyline have no vision to include these improvised businesspeople. They are being slowly removed from the city’s center.

My hardcopy of Holliday’s book is fully highlighted, with the words ‘Pho Hoa on Pasteur Street’ and ‘Banh Xeo 46A’ scrawled into the margins. This book has been somewhat of a bible journeying around Saigon.

It helps that ‘Noodle Pie,’ the blogging project Graham Holliday started during his tenure in Vietnam, is like an annex of the book with photos to accompany his writing. There’s a foreword accompanying it by Anthony Bourdain. Holliday also produced a 1,500 word draft of “liner notes.” With the book clocking in at an impressive 88,785 words (FYI: 22,567 words didn’t make it into the final cut,).

This is not going to be the last we hear of Holliday. Be on the lookout for Holliday’s follow-up, “Eating Korea: Reports on a Culinary Renaissance

” which sounds just as appetizing as the first helping of his Asian dispatches. 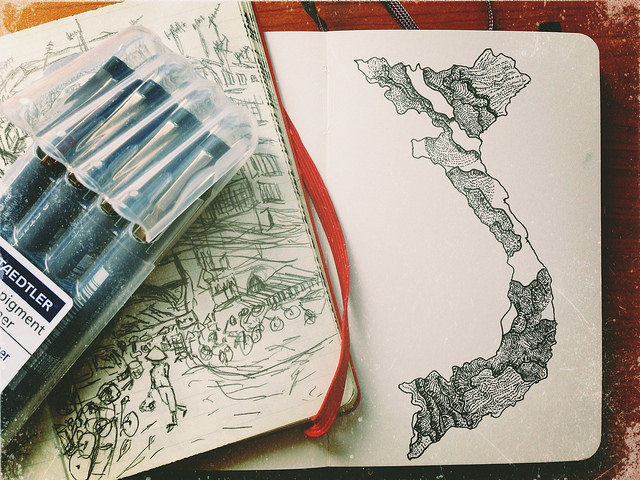 All Photos Courtesy of Graham Holliday

You can purchase the book on Amazon using this link: Eating Viet Nam: Dispatches from a Blue Plastic Table

You can also check out his new book on Korea here: Eating Korea: Reports on a Culinary Renaissance