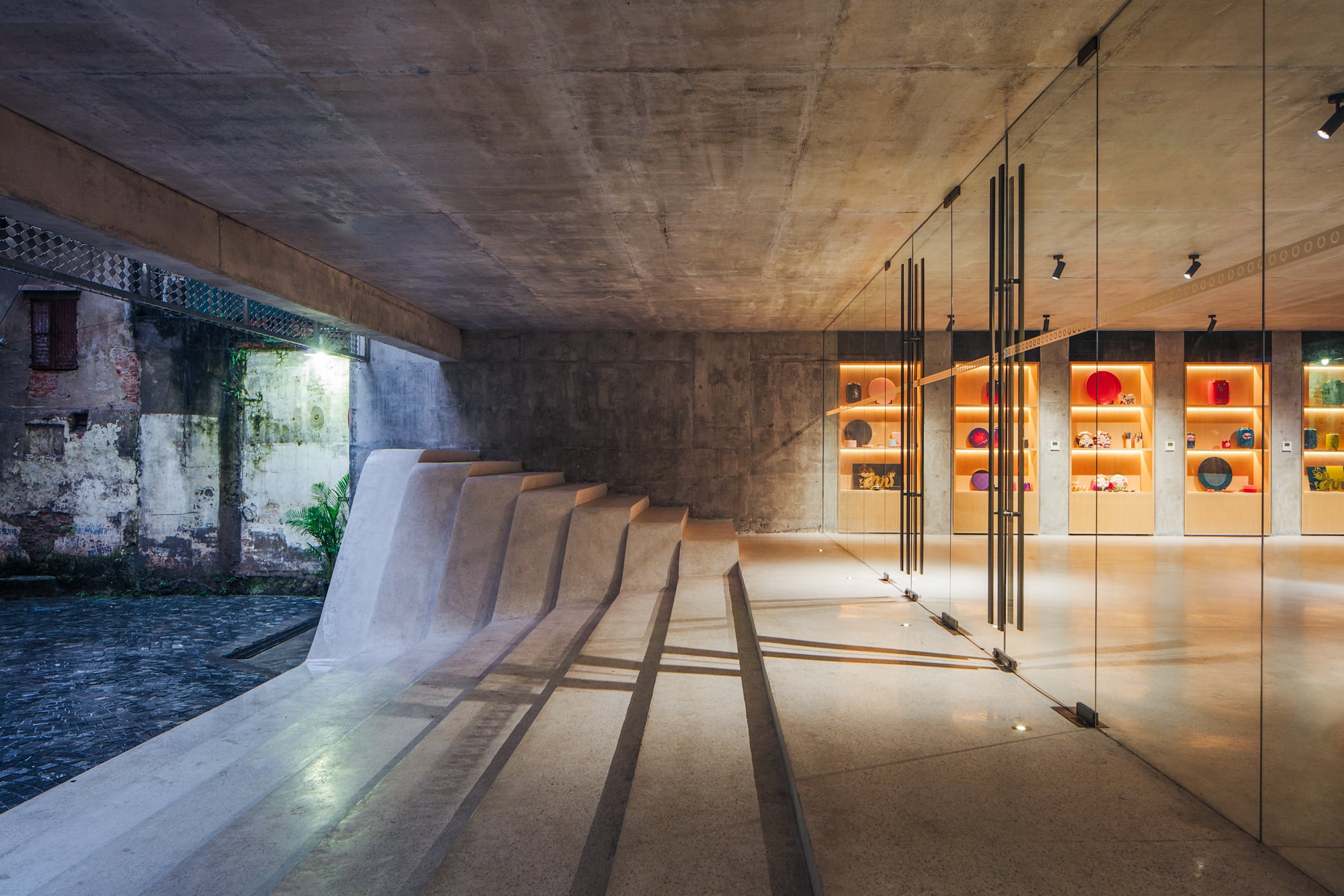 The Bridge By G8A: Grégoire Du Pasquier Gives A Tour Of A New Hanoi Project

The latest addition to the urban fabric of downtown Hanoi is a brutalist marvel designed by G8A Architecture & Urban Planning for OpenAsia Group.

G8A’s co-founder and partner Grégoire Du Pasquier gives Vietcetera a grand tour of the striking office building, while explaining the idea behind the concept of transforming “rough to precious” and “brut to polished”.

As G8A’s head of operations in Ho Chi Minh City and Geneva who also co-manages the firm’s Hanoi and Singapore offices, Grégoire is well placed to talk about the firm’s pipeline as well.

Here he lets us in on some of the exciting projects currently on his drafting board.

What leapt out at you in the client’s brief for The Bridge project?

With The Bridge the OpenAsia Group was for the first time to regroup all of their brands’ offices under one roof. With this exciting perspective in mind they wished for an architectural project that would represent the core values and practices of the company.

OpenAsia is an investment group specializing in luxury retail, hospitality and IT, serving the growing portion of the Vietnamese population looking for premium products and services.

They wanted a highly flexible working environment that allowed for their predicted expansion. We also took into account all of the unpredicted possibilities that the rapidly evolving economic conditions of Vietnam could offer.

The interior levels are column-free offering abundance of possibilities as well as natural light and ventilation. The façades were placed voluntarily in recess in order to absorb the potential construction of surrounding buildings.

Other than spatial flexibility, we focused on creating a space that would embody the company’s focus on transforming “a raw material into a refined product”. To reflect this philosophy, we gave cues of materiality that embody this concept.

A lot of brut textures of concrete were put in relation to light hues and fine polished details of bronze. With this we wanted to communicate the idea of transforming rough to precious and brut to polished.

Given the project’s location down an alley in the heart of Old Hanoi, were you under any constraints in terms of architectural styles you could work with?

Not really. The project’s location was not really a constraint, but rather an interesting point of the plot. Here we were working with the center of Old Hanoi, in the middle of the chaos.

This density is known as the “horizontal carpet”, as topographical structures developed horizontally before developing vertically, with height limits in the area forcing structures to densify laterally.

So the constraints, or the challenges, were to be able to propose a rare (for downtown Hanoi) sensation of an open space, not only in contrast to the currently dense context but taking into account any future neighborhood developments.

This was achieved by keeping some distance from the site limits for the main glass façade and by integrating a larger filter façade.

For many years now G8A has been developing the design philosophy of a “sustainable ruin”, a concept we particularly explored when designing the High-Tech Park of Hoa Lac.

We imagine the buildings in 100 years from now, or when, after the chaos (a period of a very rapid growth) has calmed, and there only remains the main constitutive elements of the building: the heavy concrete piles and the light horizontal line of the slabs. Then the essence of the project appears.

This ideology proposes creations of highly adaptable systems underscoring the robust infrastructural nature of the building.

These models come as a reaction to the social and climatic situation of rapid economic growth of Southeast Asia, a context that demands constant and hasty change in its organizations and therefore the spaces they inhabit.

The mesh façade is quite striking. Does it serve a purpose, other than aesthetically?

We wanted to create a porous façade, different to the typical opaque glass curtain we see so often. It creates a nice filter from the sun and provides privacy, yet lets through a lot of light.

Aesthetically, the mesh ironically mimics an approach often seen in the fashion industry, with the pattern less and less dense as you go up in the levels. In the end it becomes both a feature of sustainability and an identity.

We used Jakob Rope Systems’ products for the façade, they have a factory in South Vietnam and we’re familiar with their products.

What drove you to choose the brut texture of concrete for this project specifically?

The conceptual idea was to use some of OpenAsia’s products as a base. Their concept of transforming a rough material into a luxurious product. In architecture, it is translated into the interaction between rough concrete surface and neat finishings. Echoing the brutalist period when the material has been expressed without any makeup or beautification.

What are some of the challenges architects face when designing office space?

Like any spatial design we need to address the best possible solution for natural ventilation, natural light, offering a comfortable user experience in an environmentally sound structure.

With The Bridge there were also very specific client requests. Flexibility, reversibility and the need to address a specific context of the dense and unpredictable environment of the Old Hanoi.

The project was handed over in 2019. Now that the OpenAsia team has moved in, what is the client’s feedback? Are all the spaces being used as intended?

We are happy to see that yes, fully. The users, who are also the owners, are now using the space as planned, respecting all recommendations we suggested. But already the layout has changed from the initial one, which means we were successful in providing an evolving and flexible project.

We have a few projects in construction at the moment in Switzerland, Vietnam and Singapore.

In Switzerland we are developing semi-detached housing with integrated solar facades. In Vietnam we continue our work for FPT Software, working on a new prototype of office buildings. And this year Singapore will see the latest G8A proposition for social housing composed of branch-block typology completed.

Then we have some exciting projects in the pipeline: an ambitious new office building we are working on for Trung Hau Group, who we’ve collaborated with before, in Ho Chi Minh City; two resort projects in Pu Luong integrating the wild nature of Vietnam; and a mixed-use project in the south of Hanoi integrating hotel and offices.