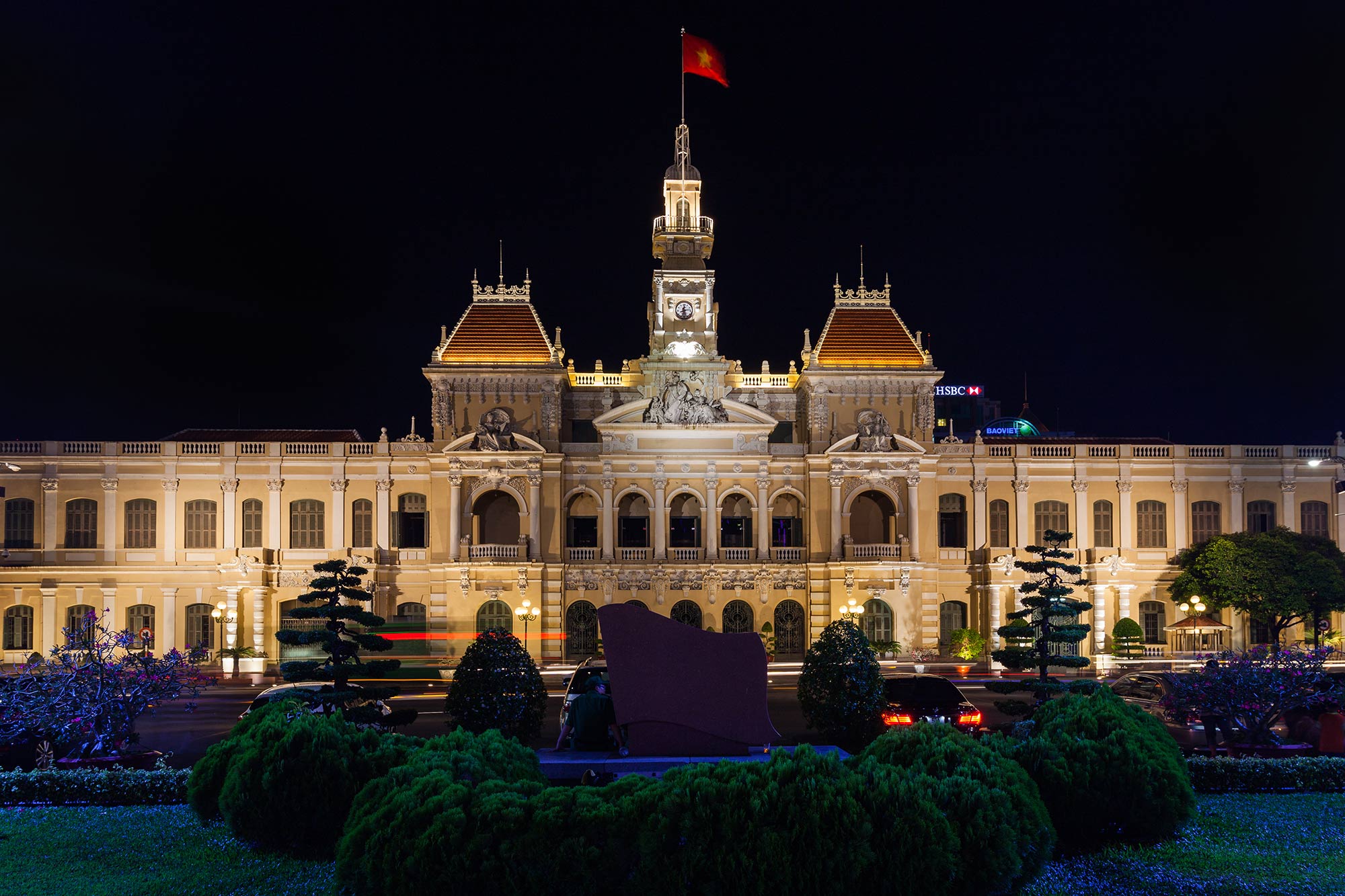 With its rich history and rapid development, Vietnam has a plethora of wonderful colonial and modern architecture. From French-colonial buildings to oriental structures to modern day skyscrapers, Vietnam certainly possesses a unique and diverse collection of architecture. Here are our top ten picks of the best buildings in Ho Chi Minh City:

Saigon Opera House, also known as The Municipal Theatre of Ho Chi Minh City, was built in 1897 by French architect Eugene Ferret. It was built with the influence of the Petit Palais, which was constructed during the same year in France. The house has three levels that are directed towards the center stage.

The inscriptions, decorations, and furnishings of the Saigon Opera House were all modeled off illustrations drawn by an artist who sent his work in from France. In 1943, some of the decorations in the house were removed as it was criticized for being overly adorned. The Saigon Opera House is a nostalgic, romantic, and iconic building that can only be fully appreciated once you’re inside. 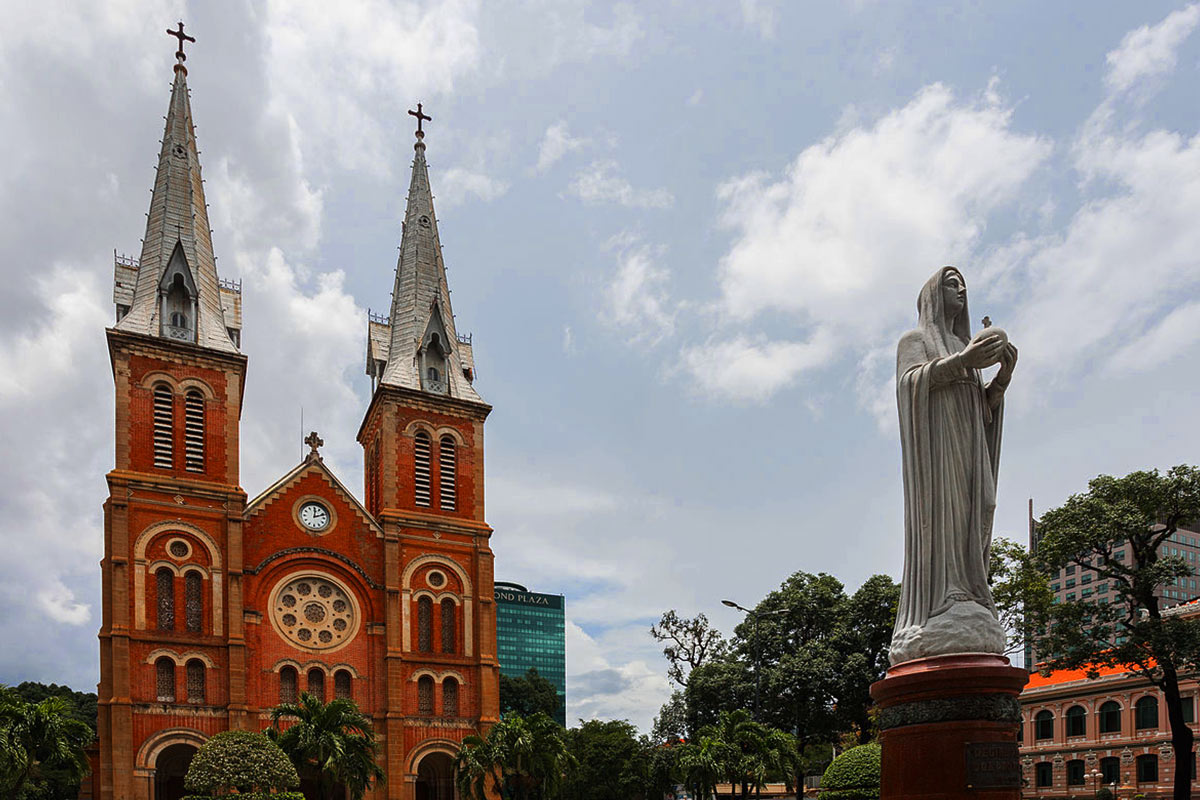 Saigon Notre-Dame Basilica is a cathedral established by French colonists. It started construction in 1863 and finished in 1880. The cathedral was designed with a neo-Romanesque style of architecture: the building’s red bricks, colored windows, and glass squares were originally imported from France. Some features have been replaced following destruction caused by war. Saigon Notre-Dame has two bell towers, one on each side, and a grand Virgin Mary statue in front of the cathedral. Therefore, visitors are not only drawn towards this landmark for its architecture but also for its religious and cultural significance.

Saigon City Hall, renamed Ho Chi Minh City People’s Committee after 1975, started building in 1902 and was completed by 1908. It first functioned as a hotel before becoming headquarters for civil servants of the city. Saigon City Hall was designed by French architect Gardes and was modeled after the City Hall in Paris.

There’s a bell tower inspired by those in European town halls, that marks the highest point of the structure. As of right now, Saigon City Hall is not open to the public, yet, it still remains a must-visit landmark for tourists as the building and its grounds are illuminated at night.

Reunification Palace, also known as Independence Palace was designed by Vietnamese architect Ngo Viet Thu. The current palace was built on the site of Norodom Palace after it was demolished. Construction of Reunification Palace began in 1962 and took about four years to complete. Reunification Palace has a rich history following the Vietnam War but that’s not the only factor that attracts so many eyes.

The building has a multitude of meeting rooms downstairs and reception rooms upstairs to host dignitaries who visit. Reunification Palace combines the architectural styles of the East and the West giving the structure both a traditional and modern perspective.

Saigon Central Post Office was built between 1886-1891 and designed by French architect Gustave Eiffel. With Gothic, Renaissance, and French influences that inspired the creation of this building, visitors who go inside will momentarily forget that they’re in Vietnam. The post office has arched structuring, patterned flooring, and high ceilings.

There are two noticeably large antiquated maps inside: Saigonet ses environs (Ho Chi Minh City in the past) and Lignes telegraphiques du Sus Vietnamet du Cambodge (postal route of Vietnam to Cambodia). Saigon Central Post Office is perhaps the busiest post office in the city, as people regularly venture in to see the grand architecture, come in to mail their letters, and buy postcards and stamps.

Nha Rong Wharf, once Saigon’s trading port, was built by French colonialists in the span of a year and a half; construction was completed in 1963. The building is a mixture of Eastern and Western architectural features. “Nha Rong” translates to “House of Dragon”, justifying the two dragon figures situated on top of the building’s roof.

Ben Thanh Market was constructed in 1912 by the Brossard et Maupin Construction Company, but it wasn’t until 1957 that it garnered it’s current name. There are four main entrances to the market, each facing one of the main streets in the District 1: Quach Thi Trang, Phan Boi Chau, Le Thanh Ton, and Phan Chu Trinh. In 1985, Ben Thanh Market underwent a major renovation yet its iconic clock tower still remained, designed to withstand Saigon’s tropical climate with its concrete awnings.The market is over 13,000 square meters large, has around 1,500 stalls selling a variety of items ranging from food to cosmetic products.

Between 1996-1997, Saigon Center was the tallest building in Saigon. The first part of the building, Phase 1, was completed in 1996 and Phase 2 was opened in 2016. Phase 1 is 106 meters tall, and has 25 stories accommodating professional offices including diplomatic corporations and banking institutions. The building is over 32,500 square meters large, of which one third of the space is used for offices. Phase 2 was created for housing and recreational purposes; a large retail mall and service apartments were established in Saigon Center. There are seven floors with over 47,000 square meters of space, and 200 apartment units. Phase 2 was designed by NBBJ, an architect from New York. Saigon Center symbolizes the start of high-rise structural development in Saigon.

Bitexco Financial Tower is currently the tallest building in Saigon, with 68 floors and a height of 262.5 meters. When it was first revealed in 2010, Bitexco was the tallest skyscraper in Vietnam until it was surpassed by Keangnam Hanoi Landmark Tower. It was designed by New York based architect Carlos Zapata. He was inspired by the shape of a lotus, Vietnam’s national flower, to form the leaf-like curve of the tower. On the 52nd floor, there’s a helipad that was designed to resemble a blossoming lotus bud. Bitexco was considered one of the 25 Great Skyscraper Icons of Construction by CNN.

Saigon Times Square took three years to complete construction after the project was started in 2008. The building is 165 meters tall and 40 stories high, making it the third tallest structure in Saigon as of right now. Total construction costs of Times Square add up to about $125 million USD as it’s also situated amongst the most costly streets in Saigon. Times Square is a multi-purpose building; it’s composed of a five-star hotel, apartments, offices, restaurants, bars, a shopping complex, and a convention center. The building was designed with attention on practicality, aesthetic qualities, and sustainable use of energy. At night, the building is vibrantly lit up, illuminating all of its surroundings.