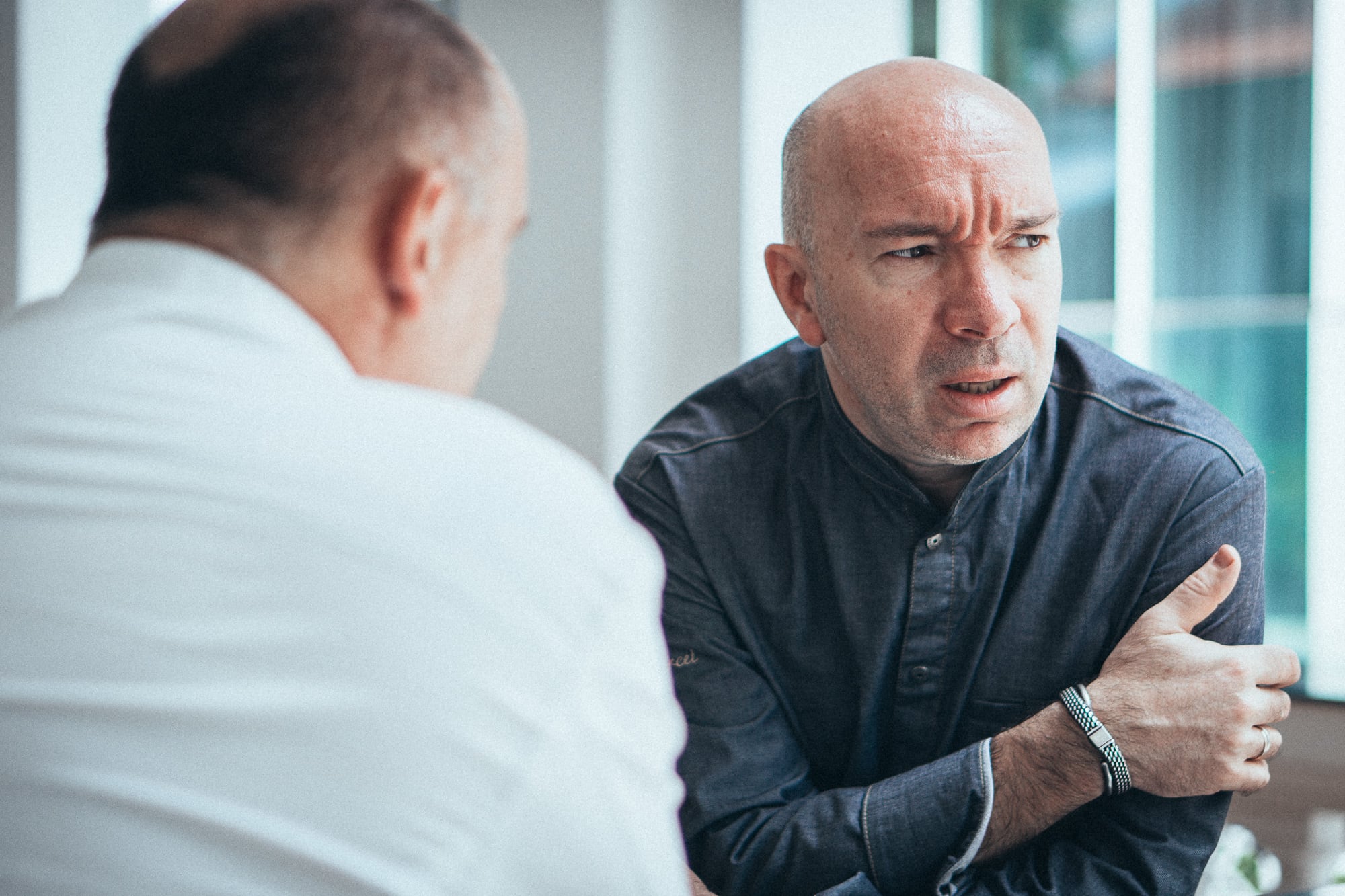 Twin brothers Laurent and Jacques Pourcel took their first restaurant to the coveted three Michelin star accolade in just ten years. In 1998, when it happened, the Pourcel brothers’ Le Jardin Des Sens in Montpellier “shook the food world,” and Laurent and Jacques became an industry. To put that in perspective, just 26 restaurants held the maximum three-star accolade in France last year and only eight in Italy, and Spain.

Since that award, Laurent and Jacques Pourcel have written cookbooks like “Our Recipes from La Compagnie des Comptoirs,” which describes the incorporation of ingredients from the Middle and Far East into their cuisine. And they have their own tableware line—the tableware in their new Jardin Des Sens in Ho Chi Minh City is specially made for this restaurant—besides running four other establishments in Montpellier, including Terminal #1.

They also have restaurants like Chouet in Marrakech, Sens & Saveurs in Tokyo, and Cafe Francais by Pourcel in Colombo. Now they’ve added Jardin Des Sens to the list. It’s Vietnam’s only fine-dining restaurant run by three-starred Michelin chefs. “We believe in the development of the food industry in Vietnam,” Jacques—who does most of the traveling while Laurent takes care of their Montpellier branches—announced at the launch of their partnership with Son Kim Land who they’ll open three more venues with this year.

As staff started to trickle in before the Jardin Des Sens’ lunch service, Vietcetera sat down with Jacques in the lounge of the brothers’ District 3 restaurant to discover what it takes to reach the heights of the Michelin rankings, and what evolutions have occurred in their cooking and their careers.

Which one dish from you career best defines “les freres Pourcel” gastronomy?

I would choose the seabass with candied lemon—in French “filet de bar au citron confit.” It’s a dish we created over twenty years ago, and I’m choosing it because it’s representative of cuisine from the South of France. We call it the “cuisine of the sun,” which is typified by sharp flavors, colors, and emotions.

There are two techniques to make this dish. The Moroccan way includes salt and better suits meat dishes, as it has a stronger flavor. Our way requires sugar which connects bitterness with smoothness and sits better with foie gras, or fish and pasta dishes. It’s a fashionable dish now and lots of chefs have their version.

How do you share the work in the kitchen with your twin brother Laurent Pourcel?

It’s significant that there’s no hierarchy between us when we’re cooking. It’s a “fusional” relationship. We have the same taste. It’s like we’re two-in-one…I mean, we are twins after all. But these days, Laurent’s focus is on our culinary activities in Montpellier, while I work to develop our overseas restaurants and projects. During my travels, I discover new ideas, which Laurent helps to actualize back in Montpellier.

Being born into a family in the wine industry, how inevitable was it you’d enter the restaurant business? Were there defining moments when you realized you would both become chefs?

I remember when we were growing up, there was a famous restaurant in our village of Florensac, in southern France. Its chef was Michele Leonce, who trained under Jacques Maximin—mentor to elBulli’s Ferran Adria. The restaurant served Nicoise cuisine which typically uses ingredients like zucchini flowers, vegetable confits, and artichokes. It had a Michelin star and it was our first real exposure to French fine dining of that level…and it made a deep impression on us both.

As our home is close to Catalunya, Spain we also visited Adria’s restaurant, elBulli, and his deconstructed dishes and the way he explored less trodden paths were another inspiration. We learned so much and eventually incorporated those ideas into our restaurants, even though myself and Laurent chose to work separately at first, training under different chefs—Laurent under people like Alain Chapel and Michel Bras, and me with Pierre Gagnaire, Michel Trama, and Marc Meneau.”

We were following our own paths. But we reunited with the decision to open Montpellier’s Le Jardin Des Sens together. At that time we were both 24 years old.

It took Montpellier’s Le Jardin Des Sens ten years to earn three stars. How did that achievement change you?

For some chefs, it can take 30 years to earn the accolade of three Michelin stars. We were lucky to earn ours in ten. Once you reach that level, the media scrutiny, but also the scrutiny paid to you by the Michelin reviewers is intense. I describe it like this: one star gets you regional media coverage, two stars get you national attention, and with three stars you receive international attention.

You’ve said your relationship with Asia began with Japan. Can you explain your connection to the country?

It started in 1995. At that time we had two Michelin stars, and we visited Japan and found that Japanese love French gastronomy—they simply love food that is done well. And personally, I’m deeply influenced by Japanese cuisine. French cuisine can be technical and rule-bound, but Japanese cuisine is different. They focus on ingredients, and embrace the immediacy of freshness and flavor. It revolutionized our French cuisine…helping it evolve into something lighter and less complex.

Can you describe Ho Chi Minh City’s Jardin Des Sens to someone who hasn’t visited yet?

Jardin Des Sens is set in a French colonial-era house. Compared to the original Le Jardin Des Sens, in Montpellier, this restaurant is smaller: we’ve gone from 80 seats down to 38 seats which provides more intimacy. However, the cuisine retains the same philosophy. We love to break codes—juxtaposing hot with cold, bitter with sweet—and we like to be creative with our dishes. Here, the concept with the cuisine is also to marry the best Vietnamese and Mediterranean products.

And for the interior design, although we couldn’t make significant structural changes as this is a heritage building that meant we paid greater attention to details instead, especially to the interior design and the atmosphere of the restaurant. When you arrive, through the secret garden, into this lounge, and up the staircase to the dining room, you should feel like you’re entering into the house of Pourcel.

Which would you choose as menu highlights at Jardin Des Sens Ho Chi Minh City?

All our menus focus on storytelling, elements like suspense, surprise, and delight are also part of our gastronomic philosophy. Nowadays people are looking for an experience, and not simply to eat.

The cuisine for this location is evolving. We’re learning, step-by-step, about suppliers, and products. So the influence of Montpellier is still strong. I would choose the “King crab with champagne jelly, coco snow, avocado, coriander, and lemon,” and the “Pigeon fillet served on the bone with candied leg, syrup of cacao juice, and glazed pink radish,” because of the way they play with flavors.

With restaurants in cities like Tokyo and Bangkok, and three new venues coming here soon—Terminal #2, Mama Sens, and Cafe Francais—how can you maintain Pourcel brothers’ standards?

We select only trusted chefs that have worked with us in France. Jardin Des Sens’ chef in Ho Chi Minh City, for example, is Thierry Alix, who spent over 10 years at Le Jardin Des Sens, Montpellier. He’s from Normandy, gained a culinary degree from the Hotel du Cheval Blanc, in Vire, France, and rose to executive chef level with posts in the Seychelles, and Mexico. That experience and the level of understanding of our philosophy is important—they are representing Pourcel cuisine, and our sense of “savoir-faire.”

How has the life of a chef changed since you first opened in 1988? How do you feel about this era of celebrity chefs and the caricature of the angry chef?

In the last ten years, chefs have been elevated to the status of actors. Now they’re expected to be in the dining room, shaking hands, and to be more image conscious—they’ll have tattoos and pay more attention to their style. Do I plan to get a tattoo? No, I don’t think so.

In terms of character, my twin brother, Laurent, sometimes gets angry—I’m the calmer one. This profession requires precision and consistency—we can’t be great one day, average the next—and this can create tension in the kitchen. It’s important not to take things personally, to go out at the end of the night and enjoy a drink together.

What’s the best way to identify talented young chefs? How much freedom do you allow them in your kitchens?

One challenge is educating the younger generation on how to taste. Some instinctively get it, others don’t. When identifying talent, assessing whether someone is passionate or not takes a short amount of time. For me, this job is like a drug—we need this feeling every day. We want to see the same passion in the people we work with.

For new chefs, they should be allowed to express themselves, but under the orientation of our philosophy. And communication should be two-way. I like to hear from them and understand their ideas and perspectives.

How do you feel about themed restaurants like dining in the dark, or even dining naked?

These kinds of restaurants make for a good anecdote. Personally, I prefer to see what I eat, and to be well-dressed…