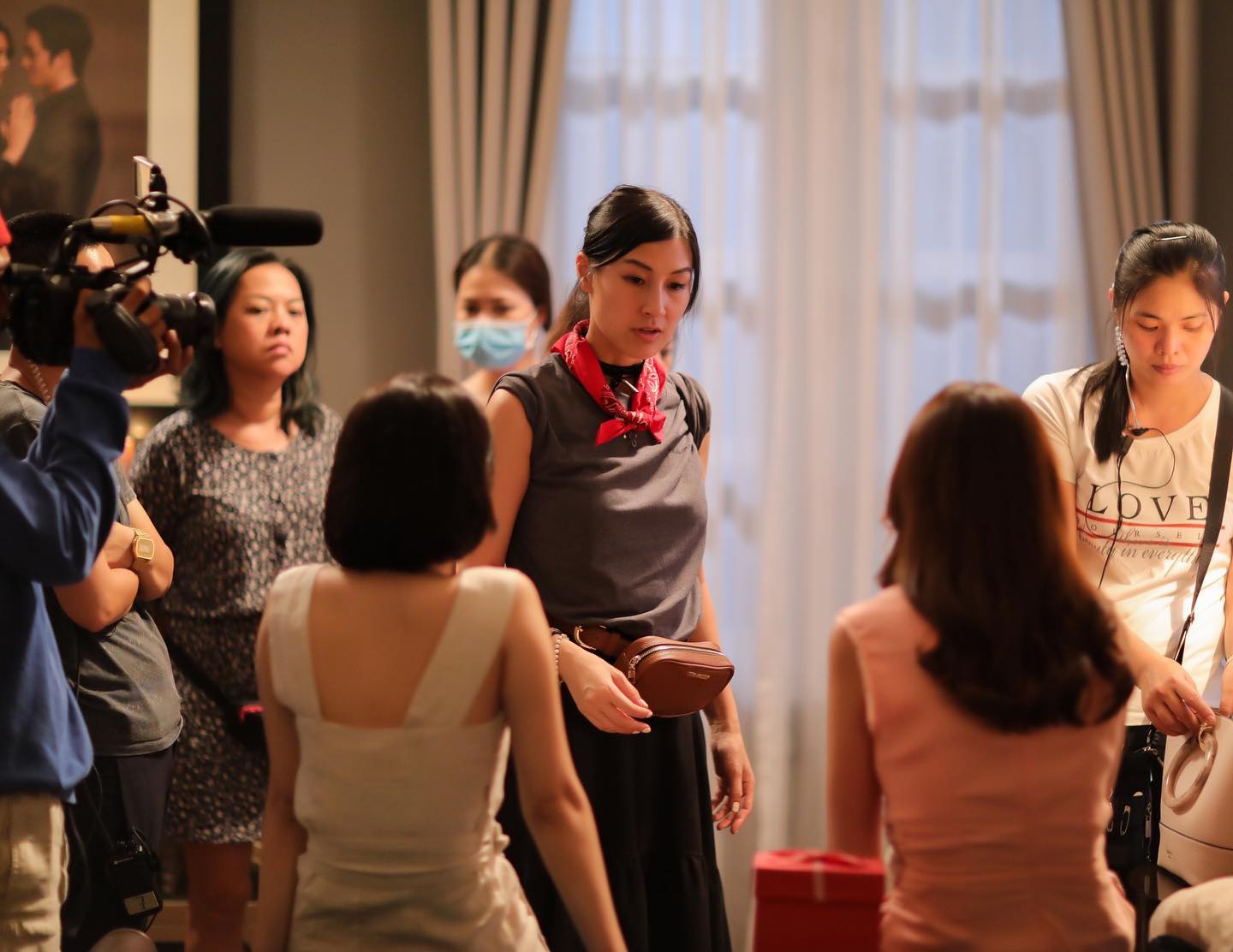 Kathy Uyen’s Take On Camera, On Set And In Life

After an 18 year journey in the film industry which saw her winning two Golden Kite Awards, Kathy Uyen continues to expand her skills behind the camera. First writing and producing alongside acting six years ago with “How to Fight in Six Inch Heels,” she makes her directorial debut this winter with her newest film, “Chi Chi Em Em.” Her relationship to acting is evolving into mentorship as well, as she has become an acting coach to new eager talent. While it was Kathy’s childhood love of acting that fueled her obsession with the craft in all aspects, what compels her now is the storytelling potential of film.

These days, it’s harder to get an appointment with Kathy more than anyone. She is constantly occupied with running her acting class as well as post-production for “Chi Chi Em Em.” But after nearly two months of effort, we are finally able to bring you to our interview and insights on Kathy’s passion for acting and its lessons for life.

You are an actress, film acting coach, producer, writer and director. Is there a role that you identify with the most?

I never thought I would be all of those things. All my life, I have been obsessed with acting and the craft of acting. The love for acting has always fueled everything I have done: from writing scripts so I can act, producing so I can act, to now coaching actors so I can share techniques of acting and recently directing a film so I can guide the actors in the entire film. I started acting with a desire to be confident in front of people.

However, now I’m focused on the importance of what I have to say when I stand in front of people. The roles of a film director and acting coach have given me the opportunity to create and share key messages in hopes to inspire and have lasting impact on others. Three years ago, I would have identified myself as an actress, but today I feel I’m more of a creative motivator. I enjoy creating stories, characters, scripts, films and curriculum, and I love motivating and empowering others to do the same.

How do you typically begin your day? Are there any morning rituals that you follow?

I am conscious of trying to start the day with an invincible mindset. I have been quite addicted to motivational podcasts while I’m showering and getting ready to start my day. It wakes me up with energy and positive thoughts. I also enjoy a really good double espresso.

What is the most rewarding part of your job?

In my acting workshops, I love hearing how actors are applying what they learned in class to their experiences not only on camera but in life. I believe how we perform in everyday life and in our everyday moments prepares us for how we can “perform” on camera, on stage and on set. The involvement in such transformations gives me the greatest high as I feel purposeful that I can add value to others.

With my films, the development of the script, research, preparation of the moodboards and setting up the mood and tone of the film is so fun. The challenges of production and being on set, working intensely with the actors and crew and making sure each frame is perfect also gives me the biggest thrills. When we establish a good energy every day on set, keeping everyone motivated and enduring sleepless nights with the cast & crew, it creates a close knit family dynamic.

What attributes of your professional life have you been able to apply to your personal life?

Were there are any hardships during your career so far that you have learned lessons from?

So many, I can’t even remember. I feel foolish for still being in the industry, when I reflect back on it. I think the financial instability as a creative freelancer has been the hardest obstacle for me. To avoid medicrocity, I needed to focus on creation and hope the financial aspect comes after. It’s a big risk, but great rewards come with great risks. I think that when we are that bold in our creations, it’s quite hard for no one to notice, and when people notice, they will all want to support your journey.

I have been willing to take those risks, whether it be preparing and going on countless auditions before booking a single role, developing curriculum for months before opening a class workshop, or writing and developing a script for years before making a film. I have been grateful to have met people who noticed and supported me along the way.

As a film acting coach, what are some qualities that you teach to your students?

Please speak on any events or projects you’ve organized that you are most proud of.

“How to Fight in Six Inch Heels” was the first movie I co-wrote, produced and acted in. It proved that anything I haven’t done yet is surely possible.

Developing my own method, approach and curriculum for acting techniques has given me confidence in my ability to articulate an intangible art form into a useful everyday approach for dynamic living on screen, on stage and in life. I am excited to continue to launch additional classes and workshop to share with others.

What are you currently working on? Can tell us more about “Chi Chi Em Em”?

“Chi Chi Em Em” is a psychological thriller feature film, and has been a passion project of mine together with producers Timothy Linh Bui and Will Vu, and writers for two years during script phase until this final year of production. Our film stars actors Thanh Hang, Chi Pu and Lanh Thanh, and it centers around a story of an architect husband and radio host wife of a show called “Midnight Confessions”, both living in a beautiful mansion. When the radio host befriends a homeless young female caller on air, she decides to take her into the mansion and help as a big sister. The longer the girl stays with the couple, secrets and lies begin to unravel and a web of manipulation unfolds.

How do you keep your insights fresh in the changing industry?

I read, I write, I watch films, I travel. I continually want to absorb new ideas and keep myself actively learning and creating.

I fight everyday to focus my mental mindset to be positive, respectful and efficient. This helps me to be grateful and creative. And from this foundation of thinking, I feel anything is possible and I get a lot of great ideas and insights when I feel amazing.

Where do you see the future of film in Vietnam in the next five years? Ten years?

In ten years, I see an international film festival in Vietnam, and Vietnam being a leader of the Southeast Asian Cinema movement.

Do you have any advice for those who want to become freelancers or pursue a similar career path as yours?

We have to be willing to work overtime on our own freelance business, and be the best staff possible for ourselves. We have to accept and overcome the insecurity in our head that accompanies us along this unstable journey. We have to will ourselves and want it a hundred times more than everyone else.