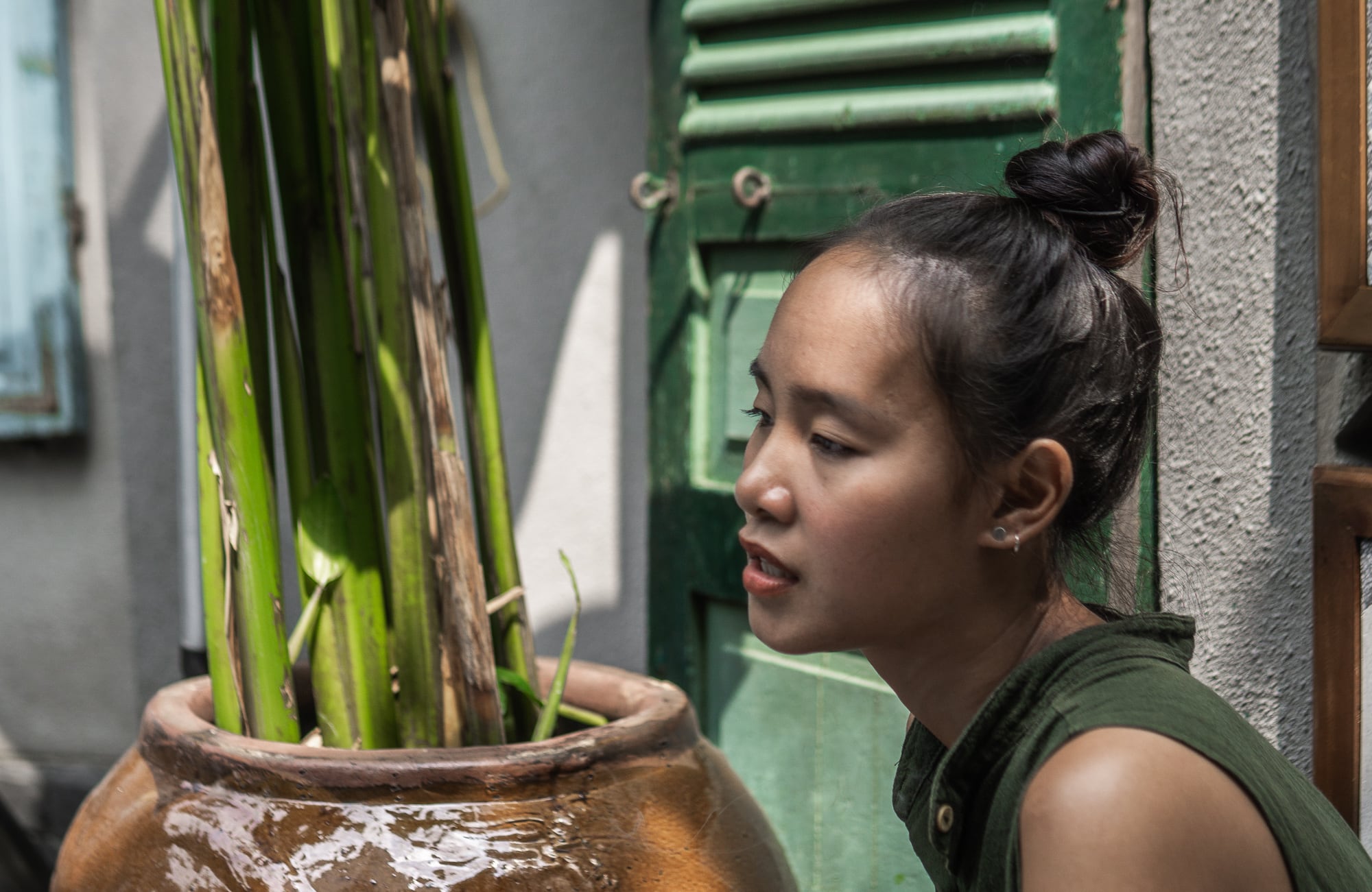 Tricia Nguyen is using art to raise awareness of mental health in Vietnam with her Wintercearig exhibitions and workshops. It’s an issue the ballet dancer and curator is all too familiar with.

The daughter of acclaimed artist Nguyen Thanh Binh and architectural engineer Le Bich Hanh, Tricia Nguyen is living proof that no matter what walk of life you come from, anyone can be affected by issues with mental health in Vietnam or anywhere. 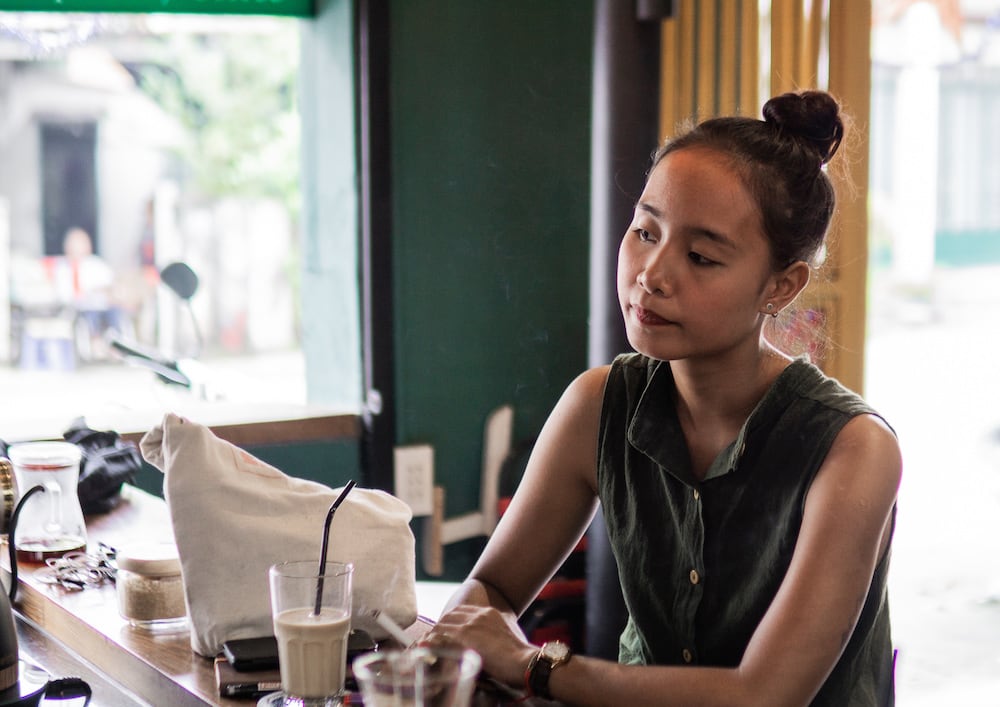 “Anxiety and depression are often viewed as weaknesses,” Tricia explains.

Tricia was sent to boarding school in England at the age of nine. It was there that she began to feel that something was amiss. And the feeling grew when she returned to Vietnam in 2011. “I came back home to be close to my ill mother—I wanted to get to know her before it was too late.”

She found that after eleven years apart, the relationship had changed, “I think depression started for me when I was in England. I had been alone from the age of nine in a country I didn’t know anything about.”

Her mother eventually succumbed to cancer in 2011, and Tricia found that she couldn’t talk about her grief openly. “It was taboo to talk about it,” she shrugs. 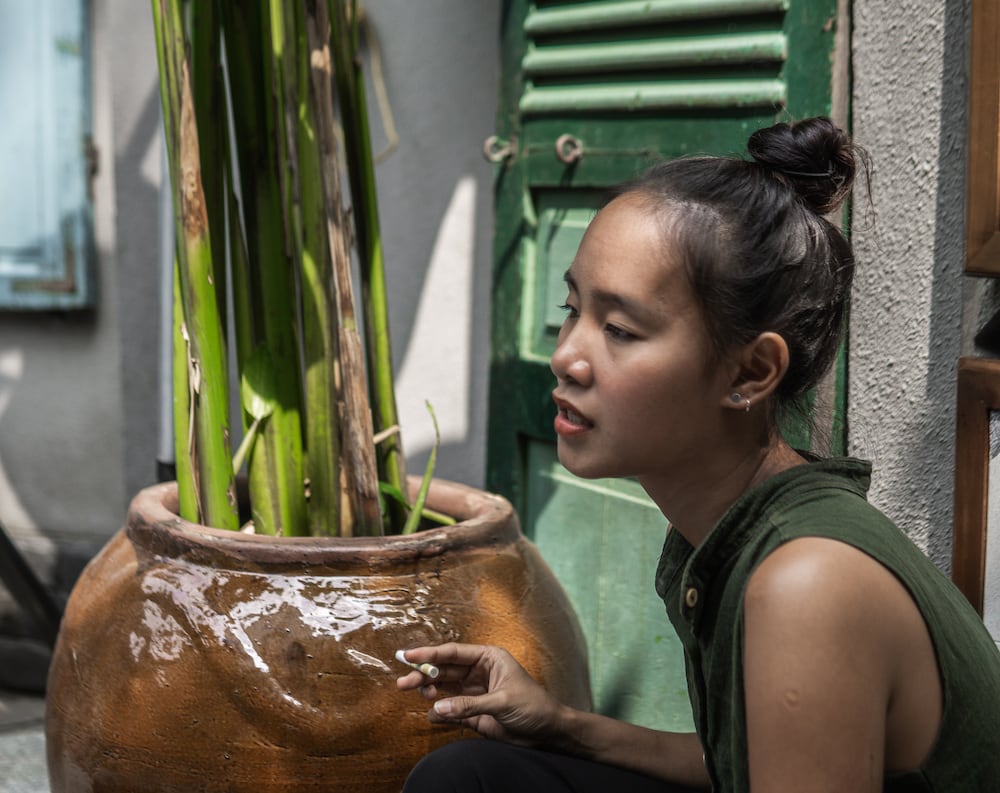 “Professional psychiatric help is limited mostly to foreign doctors in Vietnam. With rates hovering around US $100, access to mental health treatment is not affordable for most of the Vietnamese population.”

Then in 2016, while she was getting ready to graduate from the Ho Chi Minh City School of Dance and recovering from a dislocated knee, she was sexually assaulted at the hands of another student.

She hid the assault away for months before she finally took action. “Eventually I confronted my classmate about her husband. She said it wasn’t the first time that it had happened…but she offered no help. She wanted to hide it. Her reaction was rather confusing to me. I don’t know whether she was angry at me, him, or at both of us. It was strange because she was obviously distraught. I think she was disappointed in him.”

Limited support for issues with mental health in Vietnam

There are provisions for conditions like epilepsy and schizophrenia in Vietnam, with 45 mental healthcare facilities nationwide, but patients are “crowded into one place for treatment and kept isolated from the community.” Most often, treatment is limited to medication, without much emphasis on psychiatric counseling.

When it comes to less visible illnesses like depression, trauma, and anxiety, treatment for mental health in Vietnam could use a boost. Aside from the shortage of qualified therapists, the biggest obstacle is cost, according to Tricia. “Institutes that are up to standard are not made available for locals. Professional help is limited mostly to foreign doctors and is far too expensive at about US $100 an hour. Most locals can’t afford this.”

“Psychiatry and mental health professionals are hard to find here. There are mental institutions like ‘Bệnh Viện Tâm Thần’ in Ho Chi Minh City, although I feel many of them aren’t as effective as they could be when treating depression, trauma or anxiety. I’ve heard that some families confine those affected to psychiatric centers because they don’t know how to handle them. It’s saddening to hear about people ostracizing a family member.” 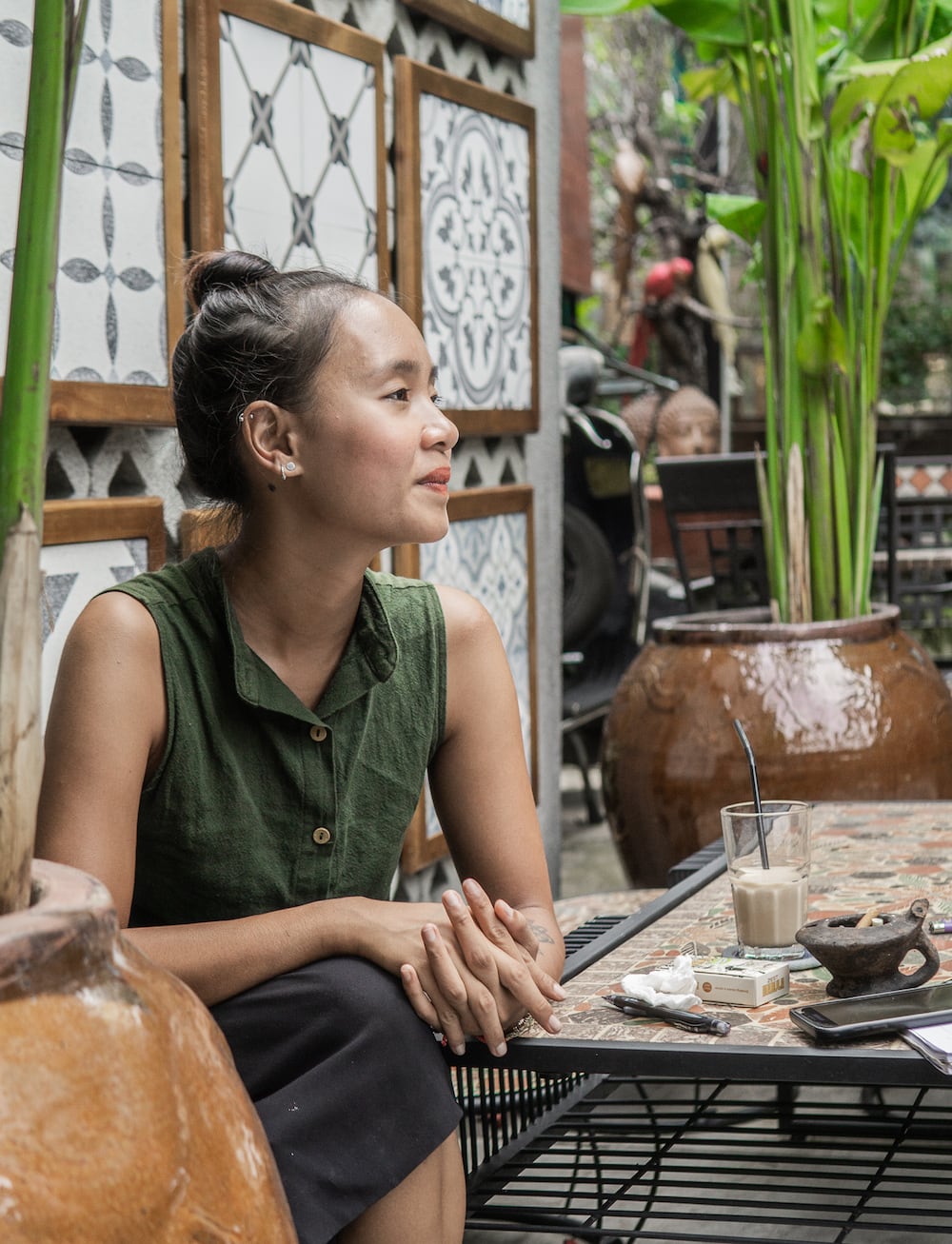 Wintercearig, Tricia Nguyen’s exhibition and workshop series, took months to conceive. “The only way I felt I could let it out was by dancing. So I started thinking that perhaps other people felt the same way,” she remembers.

A local and global issue

The challenges are not confined to Vietnam. Very few countries are paragons of virtue for mental health care. In the western world, psychiatry and counseling are also out of reach for many due to high costs, while the UK’s National Health Service is coming under severe strain to provide for its patients. However, the conversation is underway, and recognition and support for mental health issues is becoming greater across the globe.

Here in Vietnam, language seems to reflect perceptions of mental health. According to culture magazine Chopstick Alley, “In Vietnam, mental illness, or ‘bệnh tâm thần,’ refers to those with severe psychiatric disorders and carries with it a negative connotation that essentially means ‘madness.’”

And, they add, “Psychiatrists are referred to as ‘Bác sĩ tâm thần’ which is commonly understood as ‘doctors who treat madness.’ ‘Điên’ and ‘khùng’ are colloquial terms that are equivalent to ‘crazy’ or ‘nuts,’ and evoke fear and apprehensiveness when used.”

Despite her obstacles, sheer perseverance pulled Tricia through the last few months of university after the assault. She graduated with excellence and soon decided to use art as a way to start conversations about trauma and mental health in Vietnam and abroad.

But it took Tricia Nguyen months to conceive the idea of Wintercearig, the name given to her exhibition and mental health workshop series. “It took me a while because I didn’t know if people were interested in talking about what they have been through,” Tricia says. 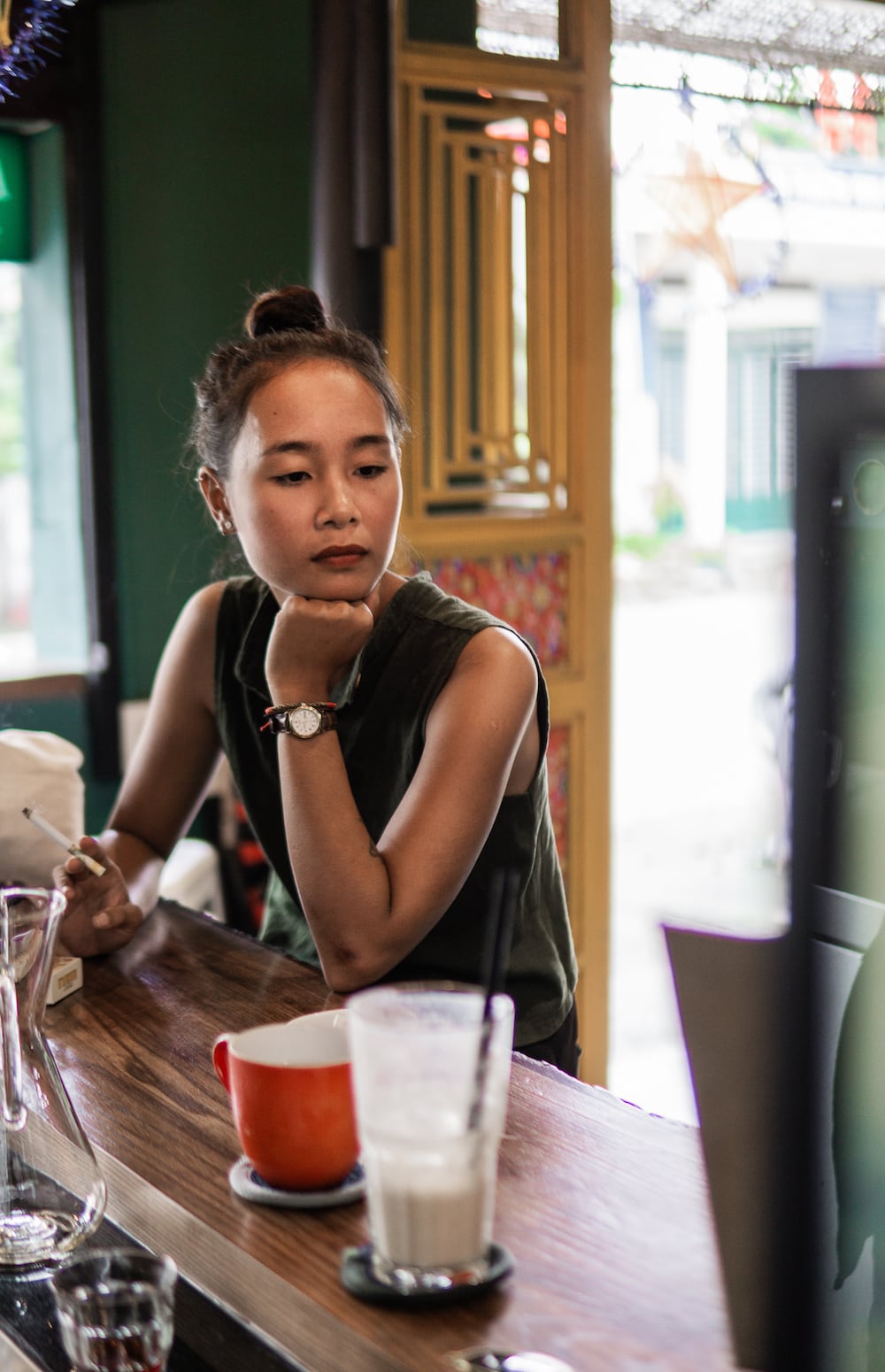 “You don’t even have to say your problems out loud if you don’t want to, you can just express it in a different way,” Tricia explains about working through trauma.

While the cost of therapy and medication was within her means, Tricia felt constricted by it, “I didn’t like being in a confined room with a stranger—and then I was prescribed an antidepressant, but that just made me feel like a zombie. The only way I felt I could let it out was by dancing. So I started thinking that perhaps other people felt the same way. This inspired me to start putting the project together.”

In Tricia’s mind, creative pursuits are one of the best ways to work through mental strife, “You don’t even have to say your problems out loud if you don’t want to, you can just express them in a different way. My advice is to get out there and do something, whatever you feel comfortable with. Just do something healthy that makes you happy, although that can be difficult to find.” 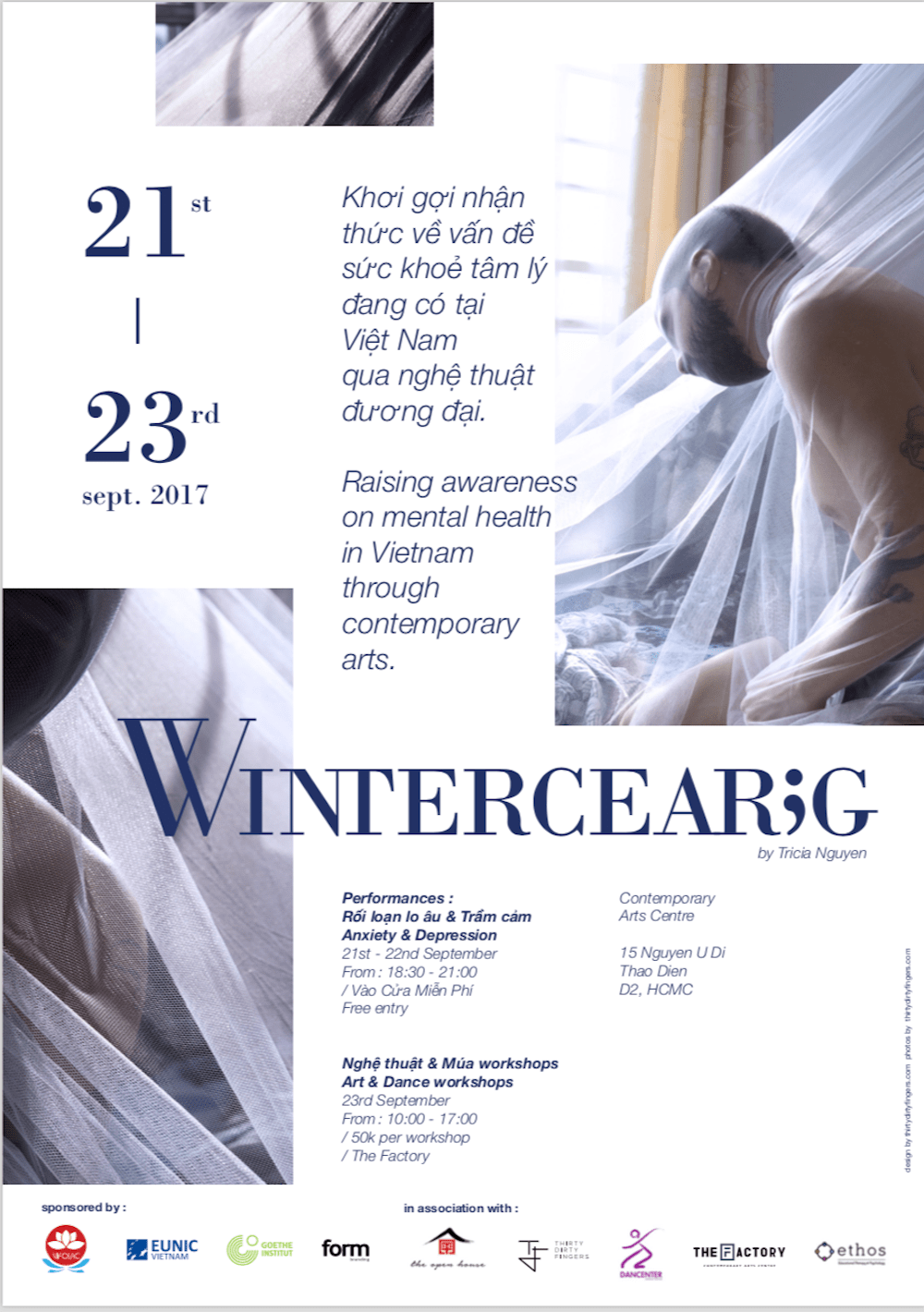 The first iteration of Winercearig, held at The Factory Contemporary Arts Center in September 2017. “The feedback was…mixed. Some attendees were very understanding and welcoming, while others weren’t.”

In 2017, Wintercearig debuted at the Factory Contemporary Arts Centre in District 2. To her surprise, 150 people showed up. “People of all ages too, but almost all women. I was very happy that a lot of people came and shared their stories. The older generation, those who had lived through the war, actually talked a lot more than the others. The women mainly talked about what happened within their families during wartime. After, they talked about how they were also brought up suppressed into obedience, and couldn’t go against the words of men. If they did, they faced potential physical abuse and other forms of mistreatment.”

“The younger generation still has a wall around themselves. They came but didn’t open up yet. They were still holding back about their problems even though it was a safe space. There was only one young man that came forward to talk.”

Tricia’s openness and encouragement did meet some pushback, “The feedback was…mixed. Some attendees were very understanding and welcoming, while others weren’t. If they’d suppressed something for so long, why were we making them revisit what happened?”

But Tricia insists that opening up dialogues about mental health in Vietnam is the way forward. “Talking about the experience helps you get your emotions out, but you need a good support system in order to do that.”

For “The Forest” Tricia has even choreographed a dance performance to accompany artworks and installations by artists Florian Nguyen, Hoang Nam Viet, and Thu Tran.

And, she adds, “Anxiety and depression are viewed as a weakness. But I want to let everyone know it’s ok to not be ok. If you’re a victim don’t be afraid to be open and talk about it. There is no shame in seeking help and support from friends or family.”

The second installment of “Wintercearig” runs from 5th to the 12th of October 2018 at the Ho Chi Minh City Museum of Fine Arts, and this time there is an overarching theme of “The Forest.” As Tricia explains, “The name Wintercearig is an Old English word which describes the unbearable nature of a long, cold, dark winter. It’s an expression of the sadness you feel during that time.”

And, she adds, “’The Forest’ represents fear of the unknown. It’s the road to self-discovery and recovery, and that moment when you emerge from the other side. The first show was just an introduction to what ‘Wintercearig’ is. There wasn’t a special theme to it. This year I wanted something with a little more depth—to explore what people of every gender are going through. It’s a step into one’s mind so people can see what it’s like to endure that struggle.” 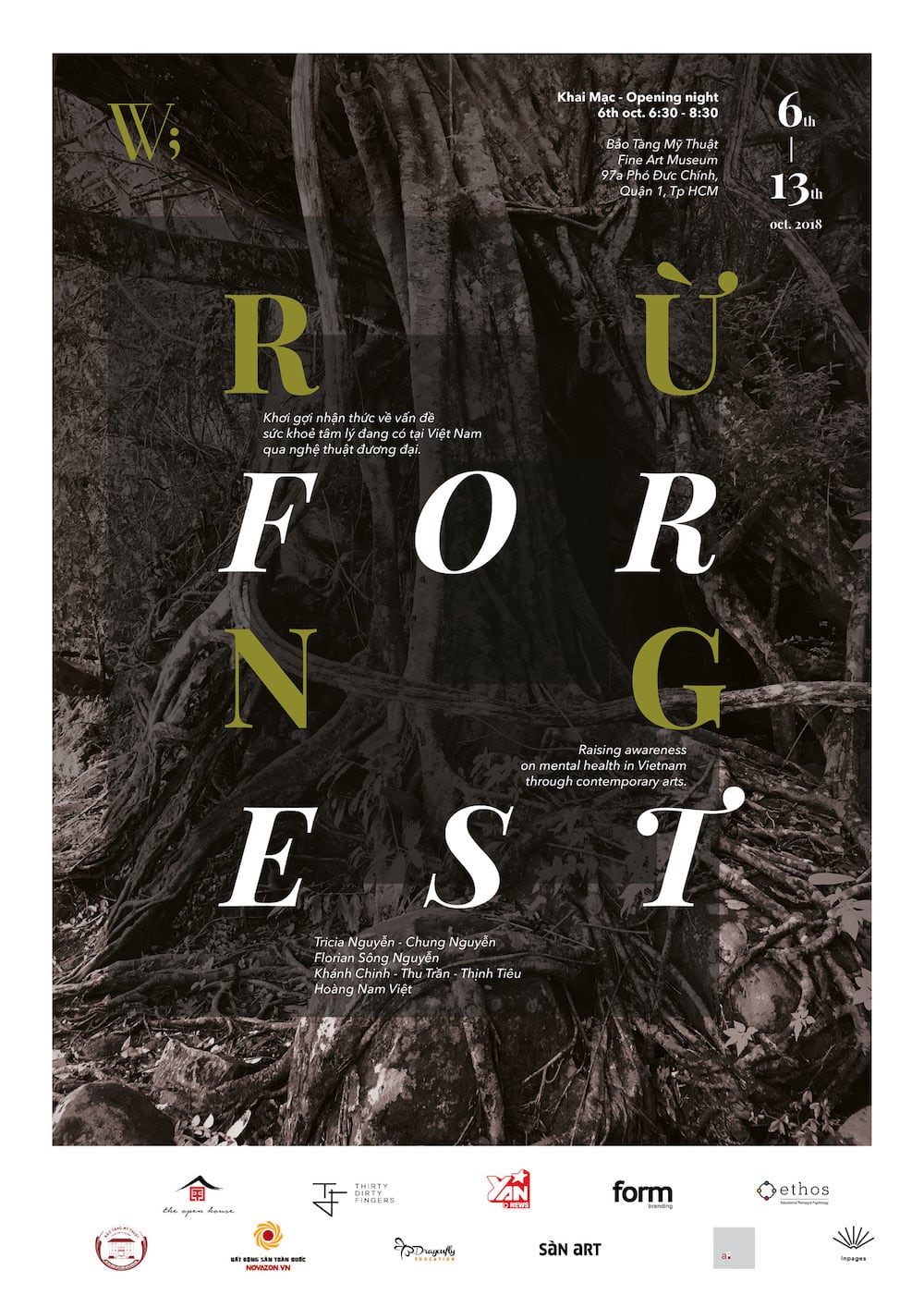 After the first show, which introduced Wintercearig, the second show, “’The Forest’ represents fear of the unknown. It’s the road to self-discovery and recovery, and that moment when you emerge from the other side.”

Tricia has even directed a collective dance performance to accompany artworks and installations by artists Florian Nguyen, Hoang Nam Viet, and Thu Tran. The art show is not a sedative for mental illness, but an exploration into it.

As Tricia Nguyen describes it, “Florian’s work is more to do with what he feels inside, so his work is abstract. Hoang Nam Viet has a dark tunnel from which you finally escape. You have to go through the darkness knowing there is light at the end, but to feel that relief you have to push through.” There’s much more to this group of artists than simply showcasing their work. “They want to be more involved in projects which give something back to the community,” Tricia explains.

From darkness into light

Tricia Nguyen’s ambition doesn’t end with an exhibition. She intends to help build a long-lasting environment which fosters a tolerance for a discourse on mental health in Vietnam. “After this year, I’m hoping to do workshops and form a support group where people can come to a safe space every week and talk about their feelings. It’s a space that allows guests to express their burden through art, which helps get their recovery underway.” 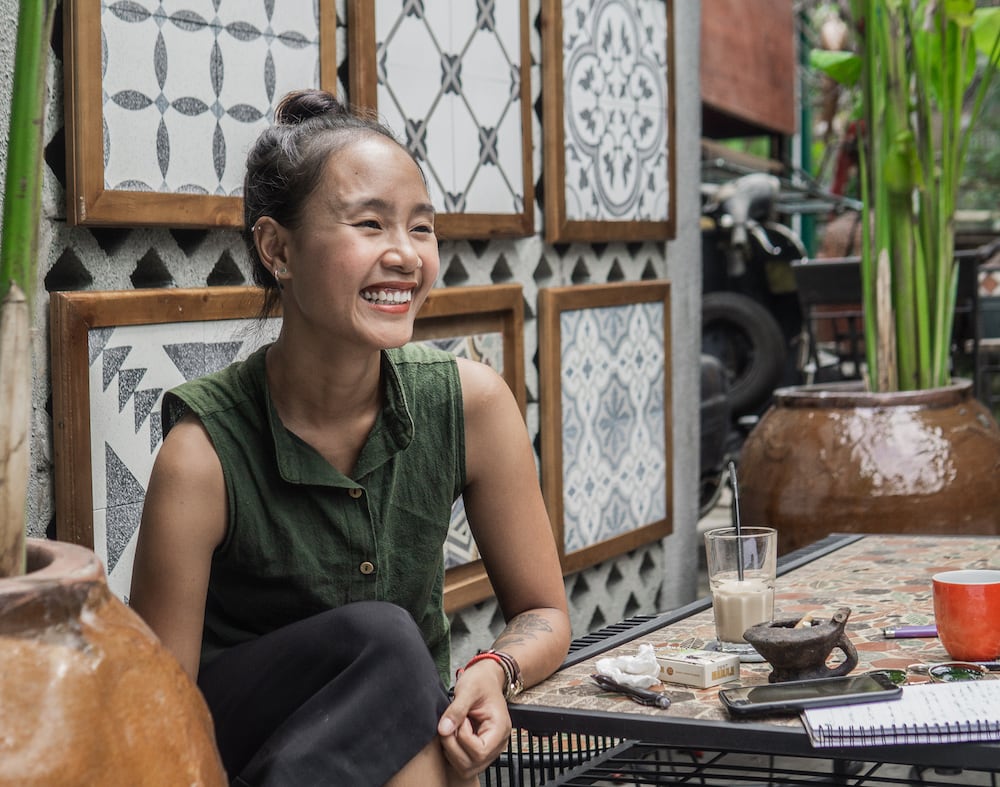 Tricia Nguyen: “I want to let people know that there is support out there for mental health in Vietnam.”

Tricia Nguyen’s parting message, despite battling the darkness of trauma and depression, is one of prevailing hope. “I want to let people know that there is support out there. Those who want to help their friends and family can do their best to learn how to provide support. Once the ice has been broken, we can only hope that it makes for the beginning of a conversation that will continue for a long time.”

Before she returns to her preparations for Wintercearig we ask a final question: “What comes after winter?”

She reclines in her chair and smiles, “Spring, and then summer.”

[Video] Air Pollution In Vietnam: How To Stay Protected