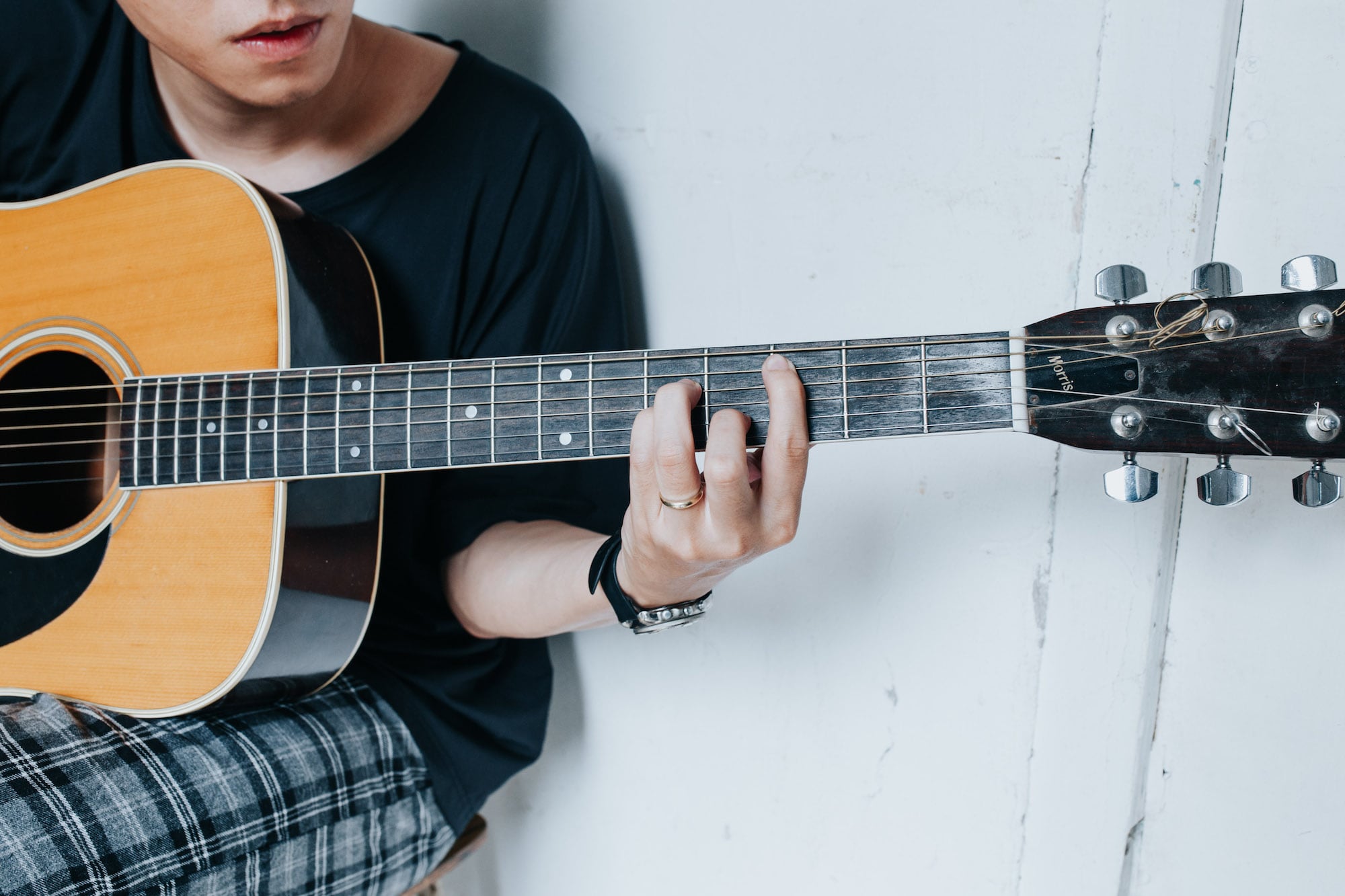 It’s a gloomy Saturday afternoon in Saigon. We’ve arranged to meet Vu Dinh Trong Thang, the lead singer and guitarist of Vietnamese indie-pop band Ngot, at Bang Khuang café because it’s the kind of nostalgic apartment-coffeeshop conversion that’s perfect for watching the rain fall while having meandering conversations about music, creativity, and success—all of which Ngot know a bit about.

Vu Dinh Trong Thang originally formed Ngot with friends Nguyen Hung Nam Anh and Tran Binh Tuan after they graduated from high school together in 2013. Fan donations funded their first album and it featured tracks like “Không làm gì.” Tran Binh Tuan has since left the group, but Ngot continue to evolve adding diverse influences like French waltz music and gypsy jazz into their indie-pop songs.

Ngot released their eponymous début album in 2015, and their second album, “Ng bthg” (Normal People), two years after that. The track “Em dạo này” from “Ng bthg” helped them win “Song of the Year” and “New Artist of the Year” prizes at the Dedication Music Awards—the Vietnamese Grammys—earlier this year.

Vu Dinh Trong Thang who is “kind of turning twenty-four” has already arrived and is sitting with a group of friends at the café when we get there. He breaks away from his conversation with them about his show tonight to speak to us about the birth and evolution of his group—and how he stays creative in this digitally-distracting era. Then we met up with Vu Dinh Trong Thang again, in his home city of Hanoi, to take some photos in Bang Khuang cafe’s kindred spirit in the capital, Quan Cam Cafe in Sixty Square.

Which three groups or musicians have had the biggest influence on you?

The Beatles, Nirvana, and…let’s get into jazz…Django Reinhardt. However, recently I have felt less and less connection to the Beatles. But the attraction was always their straight-from-the-heart compositions. They had a rule—at least in the beginning—that their music needed to be catchy, it had to have a melody, and it needed to be about something that’s relevant.

Nirvana, however, were so effortless in being themselves. Trying to be unique is a waste of energy because uniqueness shouldn’t be effortful. If it is, then it becomes contrived. For our band, we didn’t try and build a style that was alien to us—all that effort would have stopped the music from coming out.

And then there’s Django Reinhardt…because he’s just so good. There’s little else to say about him. You pick up a guitar hoping to be half as good—to sound as somewhere close to as free and romantic and pure as his music sounds.

How did the music you listened to growing up make you the artist you became today?

Besides those three I mentioned, I grew up listening to anything that my brother, Hung, put on. He was the first to tell me “rock is the shit, you have to listen to it.” He played me music by some great first-generation Vietnamese rock artists and groups like Buc Tuong, Da Vang, Gat Tan Day, and Thuy Trieu Do.

I guess for a while I was trying to be my brother. He played in the first grunge band in Vietnam called Cuoc Songs. He’s eight years older than me and my father wasn’t around much—he worked really far away and I needed someone to look up to. Hung was the first to play guitar in our family…which my father really hated. He kept pushing us towards more “serious” professions like architecture, while my mother wanted me to be a teacher.

But there came a time when I just started to be myself. It was during high school—right after secondary school—after a period of mistrust and disappointment in just about everybody.

The Doors Cafe and Hanoi Rock City. The people at Hanoi Rock City in particular were among the two percent of people who understood who we were. They’re the guys that actually listened to us and said “we have to get these guys on stage.” And from being on stage we worked our way towards making our first album. Then we had more money, and we could make the second one. We knew the quality had to go up…and it went up.

In your songs, you treat language in a playful way—“chơi tiếng Việt.” How do you feel about the lyrics you write and the words you sing?

Thinking only about what a word means without thinking about the sound it makes is kind of boring, isn’t it? What a word sounds like is half the fun. They say music is a metaphorical language—arranging notes is a metaphor to show a feeling. The same with the arrangement of words. They have an effect beyond their literal meaning. I love when artists don’t care what the word means, they just like the sound.

Which song would you play to someone new to your band?

“Be Cool” I guess because it’s a song about being in the group. It also asks whether being in a band might be a waste of time. I do often ask myself the same. Should I be cultivating another skill that would be more useful in life?

You’re often cited as spokespeople for your generation. How is your 9x generation different to ones that came before?

Sometimes I feel really connected to my generation…and sometimes I feel really disconnected. I also don’t like to talk about our generation—as if everyone is the same age and can be grouped together so simply. However, if you look at the overall pattern of the generation it’s about the liberty of information and the accessibility of art and cultures locally and globally. But we are also a reflection of what earlier generations have passed down and injected into our minds.

Personally, sometimes I feel like I’m the exact representation of the world today—if everybody was summed up into a single person then it’s me. Most of us are Asian, with a bit of Africa and whatever. I’m a guy, who’s a little feminine—there’s more men in the world. And if everyone divided their wealth, they’d have just a little…like me. It gives me a sense of responsibility to represent humanity to aliens if they land or something.

Why did you call your album “Ng bthg” (Normal people)?

The album features songs like track “Em dạo này.” And I chose that as the album title because I just like the abbreviated way it’s written, and I like the sound of it. Seeing that name for the first time was the first time I saw people not using vowels—just writing with consonants—but you can still understand the words.

It’s a kind of shorthand which reflects how everyone is afraid of losing time. Time is the real currency of our modern lives, which is a theme of the album.

What does it even mean to be normal these days?

Right. What is normal anyway? Look at all these people in here who are on their mobile phones constantly. It’s a kind of ADHD everyone is having. It’s good for me—because I don’t feel compelled to always check my phone. It’s a tool that I value but that’s all. Concentration will be a currency in the future. Maybe I’ll be the one person who can focus for fifteen minutes…

Besides not checking your phone too much, how do you get the most out of the time that you have?

It’s a leap of faith for me that instead of trying to write music or thinking about writing music or planning the next album I just meditate. I do that for twenty minutes twice a day. By leap of faith, I mean that when you’re in a concentrated enough state your intuition rises beyond words, and it positively affects what you do when you write. Meditation is cultivating the mind, so when you don’t focus on cultivating the mind you practice the concentrated mind. Every day I’m fighting the fear of wasting time.

I write everyday…something little like a melody or a lyric idea. If the idea is in words, I’ll put some music to it, and visa versa—if it’s a melody I’ll add words. It helps me keep up my creativity.

I know I’m a creative guy, but I’m not creative all the time. It fades a little, like something is getting in the way. Is creativity a skill that you can hone? If you practice it, will you be better at creating something like a knife that can be sharpened? I’m sure I can learn more about that, but for now, meditation is the main way I cultivate my creativity.

Did you ever fall into the rock ‘n’ roll lifestyle?

I do have a tiny problem with drinking—we got in a drunk fight last night. For now, it’s not an everyday thing. And the band usuallt doesn’t drink. They do worry too much though, so their health suffers from stress….

Do you feel life experiences translate into great songs? For example, do you need to have had a broken heart to sing about love?

I used to think that way. But my responsibility is to sing about what I know. It’s a simple rule—write about what you know and stay quiet about what you don’t. I’m not worried about having more experiences, I’m concerned with having a deeper understanding about the experiences I’ve had…

All photos for Vietcetera by Nancy Zhou.