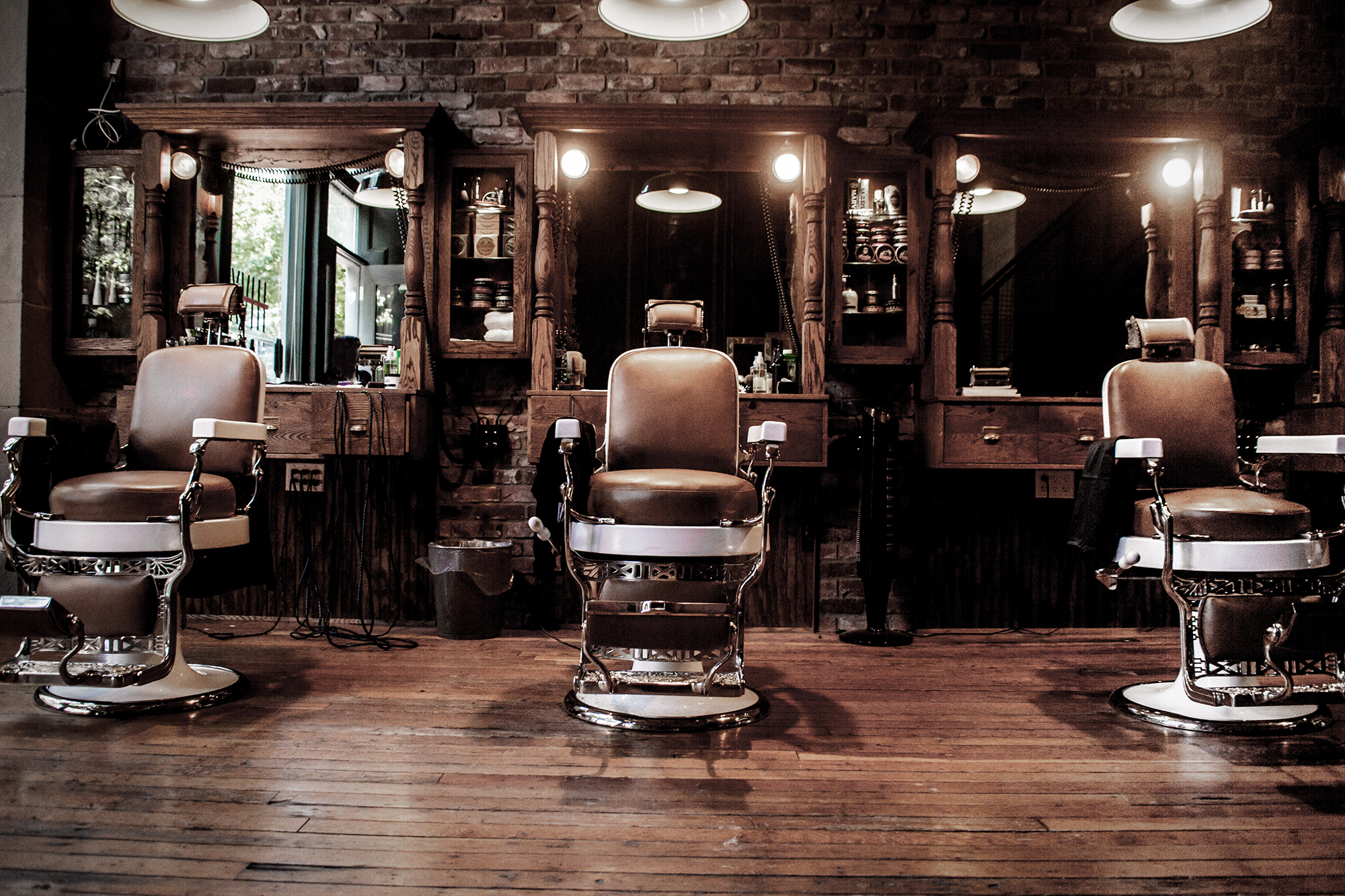 Saigon Barbershops: Seven Of The Sharpest

With an average local temperature of 30 degrees, good grooming is essential to beat the tropical Saigon heat. Luckily, a growing number of barbers have got our backs (and sides). Even in the past year, two classically old-school men-only Saigon barbershops have opened—Brothers and House of Barbaard—with the sort of standards you’d expect from a barber in a European capital; part gentleman’s club, part barbershop. They have joined a long list of eccentric local shops, like Liem’s chain of Cholo-inspired hairdressers, that provide a unique experience along with their precision approach to hair styling.

So we’ve compiled a list of seven of the sharpest Saigon barbershops. If you’re not sure where to go for a fresh fade, give one of these a try.

7 of the best Saigon barbershops

Tattoos, Dickies jumpsuits, piercings…entering Liem’s can feel intimidating. But grab a ticket on your way in, nod your head to the Vietnamese hip hop on loop, and discover some of the friendliest, most well-trained hairdressers you’ll find in any of our Saigon Barbershops.

It’s a disconcerting discovery walking down an alley like District 3’s Nguyen Son Ha and emerging into a 1960s Mexican-American neighborhood. But Liem Barber Shop, established in 2015, has customers coming back again and again drawn by a team as passionate about hair as the Chicano lifestyle. No matter what time of day, you’ll see a long line of patient customers waiting in the fast-moving queue for an affordable classic comb-over or a supremely clean fade. Right after, you can head to their affiliated Viet Gangz Brotherhood for piercings and tattoos (2/45 Cao Thang, District 3, HCMC or 21/3B Dang Thai Thanh, Hoan Kiem District, Hanoi).

Liem’s is also inclusive enough to offer both men’s and women’s styling. And their uniqueness has helped them to open 12 stores in Ho Chi Minh City, another five in Hanoi and one in Bien Hoa.

Located in District 10, Saigon Clippers is one of the classic Saigon barbershops. Instead of the gangster edge of Liem’s, Saigon Clippers brings a vintage vibe with exposed brickwork and dark wood fixtures.

With a mission to bring you sharp old-school styling, Saigon Clippers’ barbers disregard long lines, taking their time to deliver slick designs. The customers who come to Saigon Clippers are from all races and demographics—you might run into a college student, a kid wtih his dad, or an expat looking for a fresh cut at one of the best Saigon barbershops. 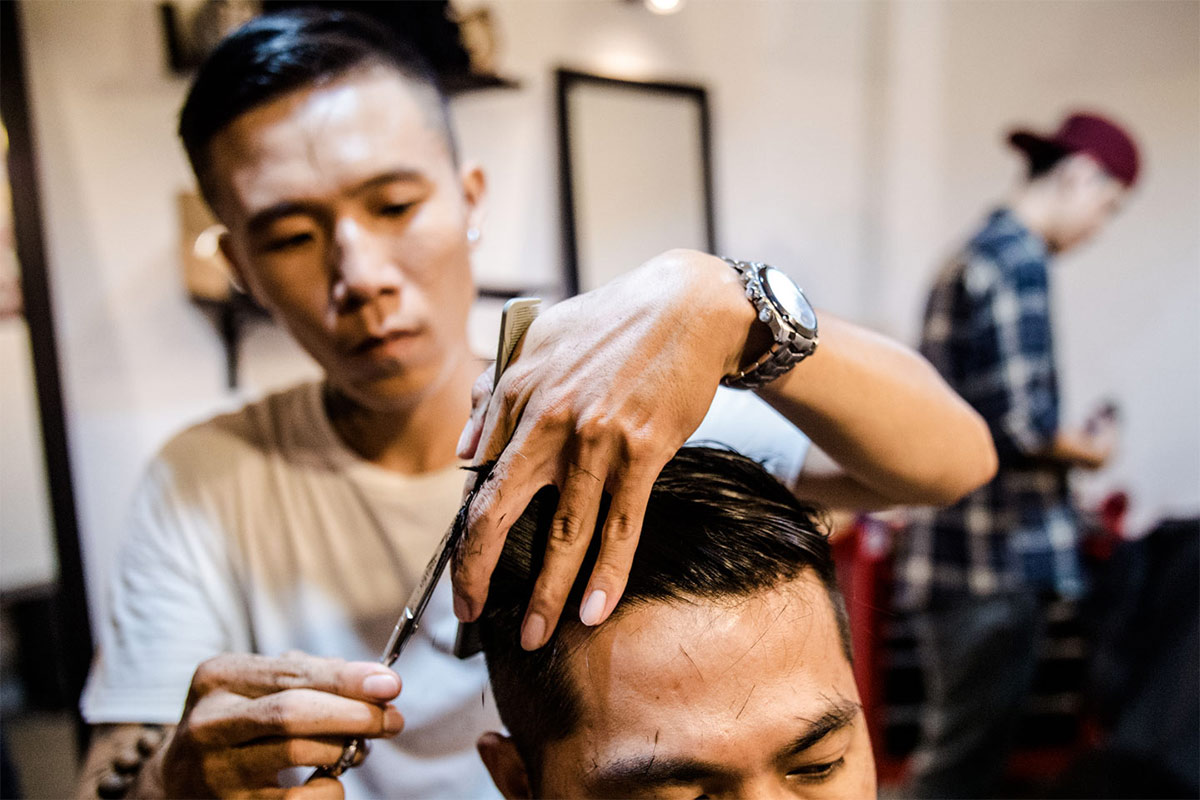 We’ve introduced Hurricane Barber before when we told you: “The interior is understated and practical: classic barber chairs; a mirror for each barber; and shelves crowded with electric clippers, scissors, razors, combs, neck duster brushes and other hair-cutting paraphernalia.”

It’s still one of our favorites, due to an approach which aims for an air of laid-back personability in more intimate surrounds than most other Saigon Barbershops we’re talking about here. In fact, there are just two stylists at Hurricane Barber offering their bespoke services.

It feels like an old-fashioned street barber brought indoors. And Bi, the owner, has a deep passion for the craft. The idea of opening a barbershop came to him a few years ago when he was struggling to find a perfect place for an undercut. And so Bi and his partner decided to create that place with a dream of “doing it right” by combining Vietnamese traditions with Western styling. Today, Hurricane Barber attracts an enthusiastic youthful crowd.

Le Barbier de Saigon takes the term barbershop by its literal meaning—operating as a barber and a shop. To make sure their customers stay fresh from head to toe, they also run a small retail section with a selection of the trendiest men’s clothes and accessories from European boutiques.

Recently opened on Dong Khoi Street in District 1, Brothers is the definition of a gentrified gentlemen’s club. Hidden behind Réhahn’s Couleurs D’Asie Gallery, this place is a high-ceiling oasis of calm beside the bustling chaos of iconic coffeeshop L’Usine’s original store, and the mayhem of District 1’s main street outside.

Réhahn, the renowned French photographer and cigar-enthusiast, has even provided a selection of cigars that can be paired with Brother’s artisanal spirits and craft beers. And you can enjoy them on one of the city’s coolest balconies, either before or after your international-standard undercut.

Proudly men-only, although your partner is welcome to wait in one of their comfy arm chairs, Brothers is on a mission to help men feel and look their best by combining signature haircuts, personalized consultations, traditional shaves and spa services. They also sell a broad range of beard oils and hair waxes.

Aside from Liem Barbershop and Saigon Clippers, 4Rau Barber Shop is one of the most popular Saigon barbershops (so remember to make an appointment). The owner, Ha Hien, is a former actor known for roles in films like the Charlie Nguyen directed Bui Doi Cho Lon. After that and several other film projects, Ha Hien decided to step back from acting to follow another of his passions—cutting hair. He spent months refining his craft. Then Ha Hien opened his own place, 4Rau Barber Shop. And it quickly became a hangout for fellow actors and other local celebrities.

4Rau Barber Shop carries a vintage vibe, featuring classic barber chairs, moody lighting, and a wooden floor. And, because of Ha Hien’s struggles growing up, the actor has placed helping disadvantaged youth at the core of this shop’s mission.

The House of Barbaard has taken inspiration from one of the world’s best barbershops, Schorem in the heart of the working class Dutch city of Rotterdam. Founders Tom and Guido, who are also from Holland, opened in Hanoi first (at 36 Pho Hang Chao) and have now arrived in one of Ho Chi Minh City’s most interesting alleyways, with an expanded concept.

The downstairs has a lounge with welcoming armchairs, and an eclectic mixture of prints and pictures—many of them sourced by the founders on their trips home. Soon, they plan to offer a ready-to-wear line alongside the other services already on offer like a shoeshine, which they will take care of while you enjoy a drink from the well-stocked bar and one of their signature cigars. “You could spend the whole day here if you’d like,” Tom explains.

Alternatively, take the steps straight up the barbershop’s reception. Once there, choose from the “Gentleman’s Haircut,” a “Classic Hot Towel Shave/Beard Trim,” or a combination of the two—the “Full Gent’s Combo.” Then head upstairs again into an impossibly opulent shampoo room, and an equally refined five-seat barbershop next door.

The founders are also dedicated to development, identifying talent and providing six-month training programs, before new recruits have a chance to deliver one of the best haircuts you’re likely to get in Vietnam. Naturally, they sell grooming supplies like Schorem’s famous line of Reuzel pomades, hair tonics, beard balms, and other men’s grooming products.