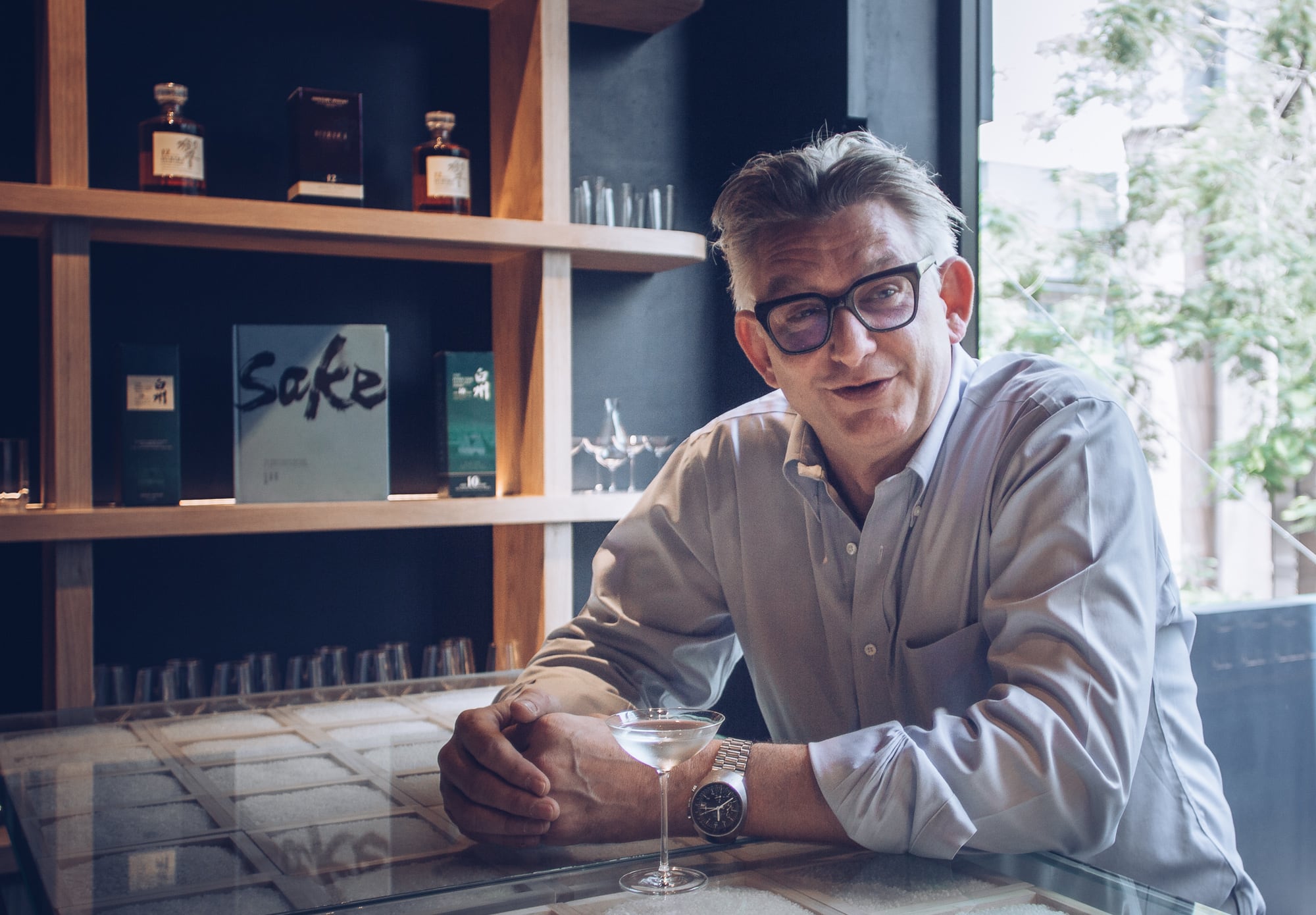 Sake Central Saigon’s older sibling opened in Hong Kong’s PMQ cultural hub in 2017. Sake Central Hong Kong was “what sake lovers have all been waiting for.” The showcase for Japanese culture features rooms that are “Japanese indigo blue, with woven tatami mat sliding doors, and dramatic custom lighting.” And, like Sake Central Saigon, it was designed by Sean Dix.

The American interior designer and architect has also created some of Hong Kong’s most popular eateries like Yardbird—his first restaurant project in Hong Kong. In the process, he became “the go-to guy for chefs-turned restaurateurs” designing other restaurants there like the Japanese izakaya Ronin, the neo-Parisian bistro Belon, and Jowett Yu’s Ho Lee Fook.

“I designed one restaurant a long time ago called Officina 12 on Milan’s Naviglio Grande canal. It’s still there, still successful. But Yardbird, which I designed in 2011, is the real reason I do so many restaurants now,” Sean Dix begins across the table from Vietcetera in Sake Central Saigon on District 1’s Dong Du Street.

Tell us more about life before Hong Kong. And how did the connection to the Hong Kong yakitori restaurant, Yardbird, happen once you moved your base there?

My background is in product design and interior architecture. I did a lot of retail spaces—right up to when I moved to Hong Kong ten years ago from Milan where I still spend around 10 days a month. I ended up there because lots of my furniture was being made in Guangzhou and I was working on some retail projects, such as the one I completed with the Hong Kong multi-brand fashion house, I.T.

Then one day, out of the blue, I got a call from a guy. He paid me the ultimate compliment. He told me he’d put a deposit down on some vintage Friso Kramer chairs—a little-known designer from the ’50s and ’60s who is one of my favorites known for his designs of drafting tables and institutional furniture for schools—but he’d seen my chairs and preferred my work. It was Yardbird’s Matt Abergel.

And how did your relationship with Yardbird’s Matt Abergel evolve?

What began as me providing an existing chair became a design for a custom chair…which grew into me designing the restaurant. At the time, my office was around the corner from Bridges Street where Yardbird was originally located. And so it became a really close collaboration.

I went on to design Yardbird 2.0, and Ronin, which was the sophomore project for Matt. Yardbird is a fun, loud, energetic place. Matt wanted Ronin to be small and a place, culinarily, where he could expand his repertoire particularly around seafood after focusing almost exclusively on yakitori at Yardbird. He and I went to Japan and bought a tree from a wood master in the middle of nowhere that became Ronin’s two counters and its floor…

Sake Central Saigon is the sibling of the original Sake Central in Hong Kong. How do these two projects relate to each other from an architecture and interior design perspective?

Sake Central in Hong Kong’s PMQ [the former Police Married Quarters built in the 1950s that’s become home to the city’s creative scene] is three units joined together. But because the PMQ is a government building there were strict limits. We couldn’t touch the floor or ceiling, or open the passages between the units—in terms of architectural interventions practically all we were allowed to do was paint the walls. Here, for Sake Central Saigon, I was stunned at how much we could do.

Can you highlight some design features of Sake Central Saigon?

The space is quite unusual. When it was the bar, Last Call, there was a long corridor, then you dog-legged up the stairs with the bathroom beneath it. I asked myself: ”How can we better draw people in?” I came up with the idea to do this dark strategically-lit staircase. We created the panels using a Japanese charred-wood technique called “shou sugi ban.”

I’ve been wanting to use the technique for a long time—great ideas from one project are often applicable to another project. And so, we had wanted to use the charred-wood technique to create the flooring at Renkon—our next project here—but after testing, we discovered it’s not resistant enough for that purpose…it worked much better as the entrance to Sake Central Saigon.

The tables feel like the real centerpieces here. Was that deliberate?

This project is all about the tables. Beneath the glass are traditional “masu” sake boxes we had custom made in Japan. The Japanese rice in the boxes is at different stages of polishing—which references how sake is made. In the boxes at this end, it is unpolished, and at the other end, it’s down to 30% polished.

We also have two custom floor-to-ceiling refrigerators which I also designed. We made them here in Vietnam. They’re lit from inside which looks quite dramatic.

Sean Dix Design+Architecture has a distinctive approach to lighting. Could you describe your philosophy around how spaces should be lit and what influenced you?

What’s special is you don’t see the light source. You can see it at Sake Central Saigon, for example, in the way the glasses are lit at the bar—which I borrowed from Ronin. It’s probably some neurotic sensitivity of mine that’s evolved over time…I love light, but I don’t want to see its source. It ties in with a lot of my thinking about design—the more that it’s in the background the better.

It’s not something I learned from my mentors. I worked under Ettore Sottsass, the Italian postmodern designer, and British designer James Irvine, another Sottsass protegee. Neither were known for their subtlety.

In the past, you’ve also said “design should be anonymous.” Have you always created understated interiors?

In Kansas City, where I come from, we don’t do a lot of shouting—it’s culturally understated. But I have done some wacky things. I designed irreverent Italian fashion label Moschino’s shops around the world. Franco Moschino had just died, it was the early 90s, and they knew they had to change. Their stores felt very dated. The brief—for something like 80 of their stores—was to develop a new retail concept that respected the history of the brand. I created a dramatic chandelier with hand-blown glass high-heeled shoes.

How do you find the time to research new ideas and materials? Where do you get your design inspirations?

A big part of my research is constant travel. I’m back and forth between Hong Kong and Milan all the time. This month I was also in China, and Kansas City. Richest of all is Japan. It’s the Galapagos of design where things evolve differently from everywhere else. Every time I go I’m inspired. There’s a thoughtfulness to design that’s in their blood. Take Levis jeans. It was Levis Japan that was the first to release archival designs. And Japanese whisky is regarded as among the best in the world.

Once you’ve finished overseeing the finishing touches to Sake Central Saigon what’s next?

I’m going back to Hong Kong, then Milan, and then to a region of Italy that nobody knows—even some Italians—called Le Marche. It’s in the east, on the Adriatic Sea, and it has a remarkable food culture. They have been making sashimi for hundreds of years. And it’s next to a rural agricultural region of the country, so you find traditional countryside dishes there like rabbit. And then I’ll be back here to work on two more projects with this team, Renkon, a modern izakaya, and Irusu, a Japanese-inspired lounge.

And who should we speak to next?

The guys behind Sake Central Saigon and the Eight Four Collective. One of the team, and the person behind Sake Central Hong Kong, is Elliot Faber. He’s a Sake Samurai and the beverage director at Yardbird, Ronin, and Sunday’s Grocery. He’s another great guy to talk to. He’s constantly traveling and super curious…