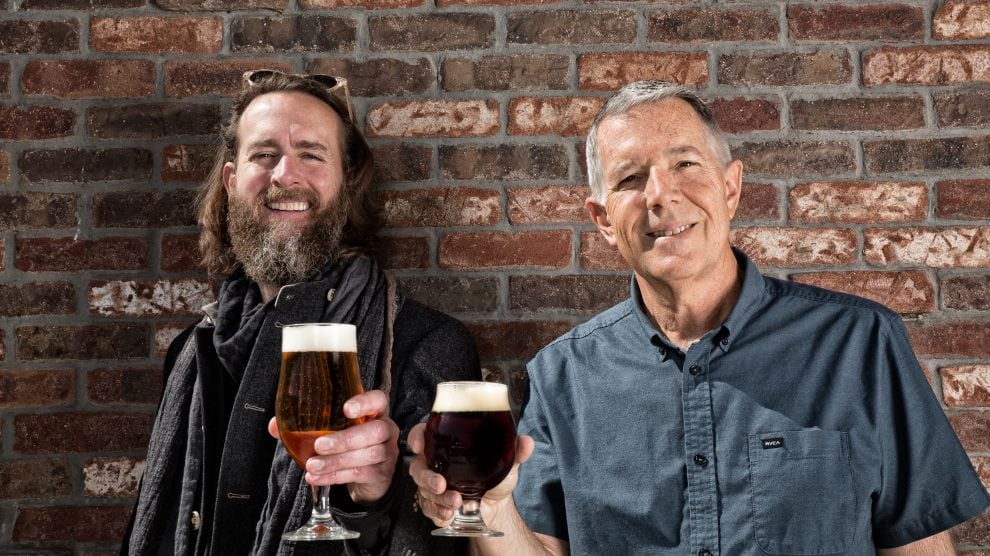 Stone Brewing Company And The History Of Craft Beer

There can be no more righteous quest than the one for better beer. It’s a mission that united beer lover and sometime brewer Steve Wagner, and music business entrepreneur Greg Koch—who also happened to love beer too…but not the bland and bubbly yellow beers that were dominating the market.

Although over time immigrants had taken a rich and diverse array of brewing techniques with them to the States by the 1970s and ‘80s characterless lagers had taken over. Savvy big beer marketing campaigns and small brewers shutting down or being consolidated into big corporations meant that there was a market for beer drinkers looking for more. And that’s when the craft beer revolution started to take shape.

A grassroots homebrewing culture first began to emerge in reaction to the dominance of big brands around the same time that they were taking over. It was a campaign to give beer back its flavor. And when Greg Koch and Steve Wagner “moved into a nondescript warehouse in a nondescript warehouse park” in San Marcos, California at the start of February 1996 they had officially joined the movement too and Stone Brewing was born in defiance of fizzy corporate lagers. Joining them in the fight were breweries like Lagunitas, Sierra Nevada, Sam Adams, Rogue, and Anderson Valley—all of whom have been cited as influences by Vietnam’s craft brewers.

In truth, when Stone set up the movement was already maturing. Another California company, The New Albion Brewery, were one of the first starting up in ‘76. And although the company’s lifespan was short-lived—within six years they had gone out of business—by the time of their demise they had already inspired a generation of homebrewers who became the microbrewing pioneers of the 1980s. And in fact, The New Albion Brewery were resurrected in 2012—when the beer was brewed again for the first time in 30 years.

The market wasn’t easy to break into for start-up craft brewers. But gradually, armed with craft beers with a fuller flavor made with old-world approaches, the movement returned impressive growth figures—including a colossal 58% growth by 1995. A year later, Steve Wagner and Greg Koch were sat in their empty warehouse but with minds filled “with a whole lot of ambition.”

If you’ve been to any of Ho Chi Minh City’s craft beer houses, you’ll have felt the warm welcome and kindred spirit shared by the craft beer aficionados there. The California brewing community gave Stone the same warm welcome. Two month after opening Steve and Greg had secured financing, and had set up a brewing system capable of outputting 930 gallons from 30 barrels. Impressive…until you compare that to Miller who sold almost 44 million barrels or another big-hitter, Anheuser-Busch, who sold 91.1 million barrels in the same year.

At least with the warehouse opened Stone could get down to business. Between then and 2002, when triple-digit growth put Stone Brewing on the Inc. 500 list, the craft brewery produced a flurry of bespoke beers. First came their Stone Pale Ale that added “American flair to a more English-style recipe,” and then a smoked stone porter—their Winter Stone. By 2005, they’d outgrown their San Marcos warehouse entirely and upped sticks to a bigger premises in Escondido.

The craft brewery’s growing confidence was reflected in their series of more elaborate beer names…and more adventurously flavored craft beers. Next, for example, came the Heat Seeking Wheat—a craft beer that balanced hoppy bitterness with the tartness of wheat—and their Stone Arrogant Bastard, a provocatively bold beer that they finally decided to “release upon the public.” It would be so successful that Stone released its big brother in ‘98, their Double Bastard Ale.

True to the craft spirit the “all-time top brewery on planet earth,” as BeerAdvocate magazine named them in 2009, embarked on a series of collaborations and charitable escapades. The outreach began with Stone’s Symposium Ale created in collaboration with the AleSmith Brewing Company and Port Brewing which put the idea of future collaborations firmly at the forefront of Steve and Greg’s minds—so much so that they jumped at the chance to make a Belgian-style triple ale with Mikkel Borg Bjergsø of the Mikkeller microbrewery in 2008. And the charitable crafts included the Sawyer Triple, a craft beer brewed to help the fight against ALD.

Breaking Into Berlin And The Coming Of The Beer Jesus

Naturally, by the mid-2000s Stone Brewing Company were far from alone. Between 1994 and 2018 the number of independent small-batch brewers has skyrocketed from eight in 1980 to an estimated 6,000 in 2018. But Stone were building up to their boldest move of all; opening a brewery in Berlin—the first American craft brewer to achieve the feat. It was especially ballsy considering Germany is third in Europe for per-capita beer consumption. And added to that it was a middle-finger to the “Reinheitsgebot,” German’s beer purity law that only has only permitted water, barley, and hops—and later yeast—to be used in the brewing of beer. The building they used, in Marienpark, has become an “international hub; a central location promoting goodwill and quality craft beer spanning the globe.” And in typically conspicuous rock-star style, Steve and Greg celebrated by destroying a pile of German beers.

Today, internationally Stone Brewing Company even has a taproom in Shanghai, and locally they have a presence in the heart of American wine country too—in the Napa Valley. In fact, you can find Stone Brewing Company in each of America’s 50 states. It’s compelling proof of the power of craft beer; a brew that has come to reflect an obsession with quality and consistency, with lots of innovation thrown into the mix. No wonder they call Greg Koch the beer Jesus.