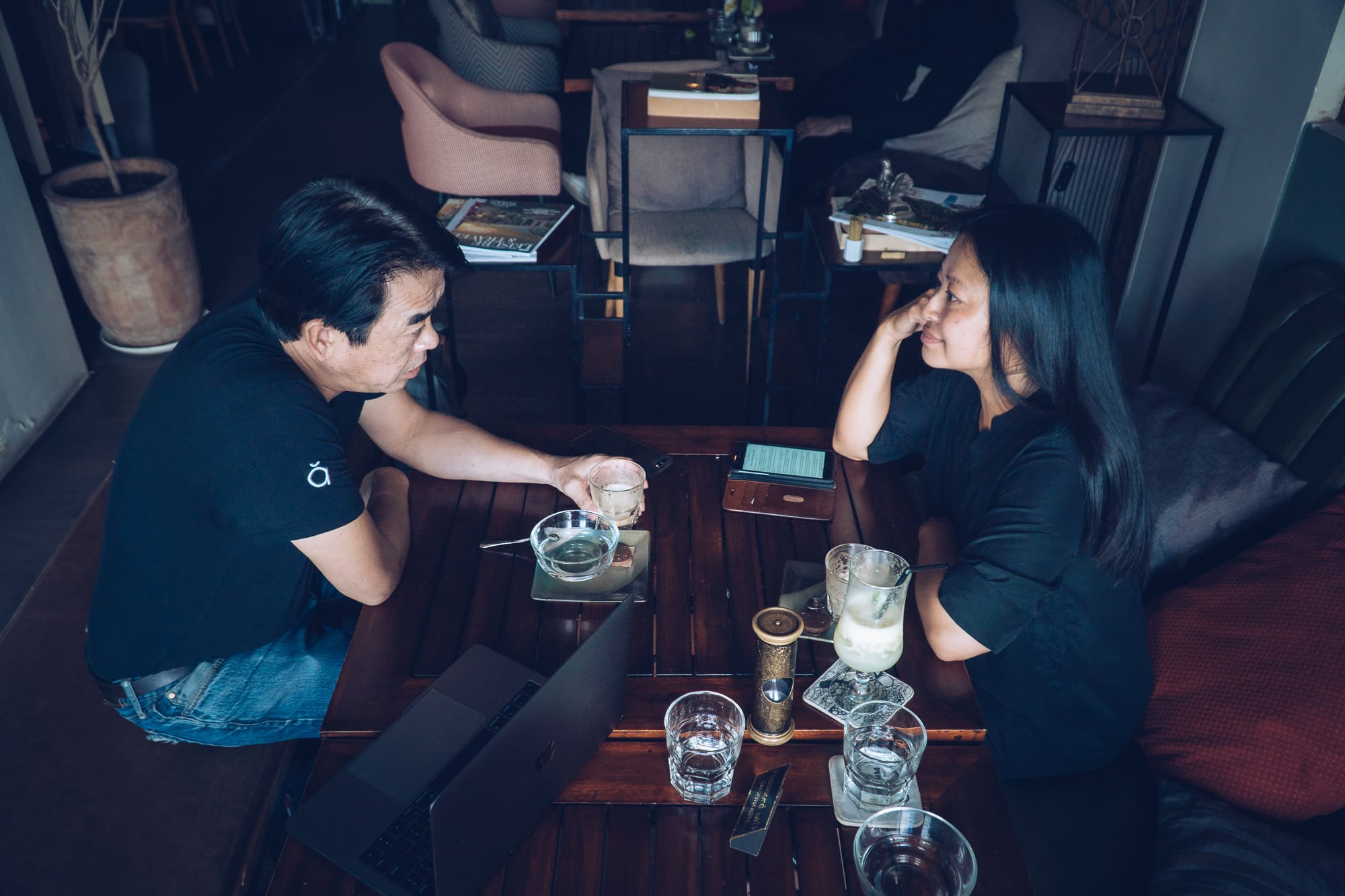 Anh Le is a household name in Denmark. She’s been called the Queen of Nordic Vietnamese Cuisine. It’s a reputation that’s grown since the opening of her family’s first Copenhagen Street Kitchen in 2003. This Vietnamese food ambassador and cookbook author is also credited with teaching the Danes to love fish sauce…as the restaurant chain now includes seven Street Kitchens, a fine dining restaurant, and even a ready-meal line. She’s also a fixture on Danish and Scandinavian TV, and she was judge of Top Chef Vietnam in 2015.

Vietnamese-American chef Peter Cuong Franklin opened Anan restaurant in Saigon’s last District 1 wet market in early 2017. Then he invented the one hundred dollar banh mi—and later the one hundred dollar pho—at the prompting of YouTube food-blogger Sonny Side. Beyond sensational stories in the international media Anan is a restaurant “respectful of its history and traditions yet progressive and international in its outlook.” One year since the restaurant’s opening, Peter has been credited with reinventing Vietnamese cuisine…into something he calls cuisine “moi.”

Together they’re the Queen of Nordic Vietnamese Cuisine and the King of New Vietnamese Cuisine. So, while Anh Le was spending a week in Ho Chi Minh City to record a Danish national radio show, “Croque Monsieur,” with host DJ Master Fatman, and while Peter was preparing for an Anan pop-up event featuring the Hanoi-based Mood Therapist mixologist, Richard McDonough, Vietcetera asked Peter to interview Anh. Here’s what happened.

Let’s start by introducing ourselves.

Anh Le: Actually, I’ve been following you for a while on Facebook. I feel like I already know you! So, I’m 45 years old. I was a refugee boat person that came to Denmark in 1979 when I was five. I grew up in my mother’s grill bar in the north of the country…and I promised myself for many years that I never wanted to work in a restaurant.

Peter Cuong Franklin: We become hyphenated—I’m Vietnamese-American. I grew up with my mom in a village called Cau Dat outside of Dalat. She ran a small restaurant out of our home which was the beginning of my interest in food. You can say running a restaurant is in my blood.

I left Vietnam in 1975…on April 29th. I was 12 years old and I didn’t know any English at all. Unlike a lot of Vietnamese who went to the States and Europe, I was adopted, and I grew up in Chicago. I was the only Vietnamese person in school. Among many firsts, I’d never seen snow until I went to America. The thing I missed most about Vietnam was the food; small things like the chili peppers we used to have on the table to add to our dishes.

So how did you get into the restaurant industry after promising to never let it happen?

Anh Le: As I grew up, I was like a Dane. I rebelled against Vietnamese traditions—because I didn’t want to grow up as a Vietnamese girl the way my mother wanted to raise me. At 22, I came back to Saigon and I stayed for two years to understand who I am. That was in 1995. Vietnam was still very poor and I was emotionally touched by that. But I started to explore the food and got closer to the people. I traveled by motorbike to Dalat and Buon Ma Thuot, and down to the Mekong Delta. And I fell in love completely. Then I felt like I was Vietnamese again.

After some time in France, I decided I wanted to return to Copenhagen where I opened a small restaurant with my brothers in 2003…with no idea how to cook. I only knew what I’d been eating during those two years in Saigon. And what my mother had cooked. The restaurant had 30 seats. A few years later we expanded to a restaurant with 200 seats.

Peter Cuong Franklin: My path into the restaurant industry was a long one. I’ve worked in banking, and I’ve even been a teacher. I really started seven or eight years ago. I’m trained in French cooking but I cook Vietnamese cuisine, which is where I think I can make a difference. I had a couple of restaurants in Hong Kong—Viet Kitchen and Chom Chom—but I came back over a year ago to open Anan at 89 Ton That Dam in District 1.

How is your Vietnamese now?

Anh Le: I guess your Vietnamese is better than mine. I think body language is the most important thing to get over a language barrier. It helped me. The Danish language was very, very difficult for me at first.

Peter Cuong Franklin: Mine is bad so I try not to compare with people. I feel more comfortable expressing myself in English, but if I’m outside, in the market for example, I will use Vietnamese. Trying to recall my original language from my childhood is an issue—I feel like if I bring that up I might bring other things up too which might not be pleasant.

If we had to pick a dish from our restaurants for each other to try, what would it be?

Anh Le: I would choose a simple, traditional dish: bo kho. To me, it’s still an exotic dish. That’s because growing up we didn’t have any meat. There were only fish and vegetables, and not much rice. I remember a moment at the end of my childhood in Vietnam when my father finally had a bit of money, just before we left Vung Tau. He bought me a bowl of bo kho and there was a piece of baguette to dip in it. I remember the meat was so delicious. This is still my favorite with no changes…

Peter Cuong Franklin: When you look at Vietnamese food, it’s centered around the pig. In tribute, we have a lemongrass pork chop dish which is based on com tam. It’s a dish you see everywhere on the street where it’s cut thin, served with a caramel fish sauce, and it usually has the bone inside. We use a bone-in tomahawk pork chop, which was hard to source. We could use Iberico, but we prefer to use a local product. We slow cook it for five or six hours then grill it. When we first put it on the menu no one would order it. Now it works with locals and Westerners. It encapsulates everything we’re trying to do at Anan.

Anh Le: Lots of Vietnamese come to my restaurants in Copenhagen. Sometimes they complain that I don’t cook the pho right, or that I don’t cook the bun bo Hue correctly. But the important thing for me, as one of the first Vietnamese restaurants in Denmark, is for Scandinavian people to taste our dishes…to introduce our customers to the taste of fish sauce even though to them it smells so awful at first. And for everyone else visiting our restaurants, I feel that there is no right or wrong when it comes to taste.

Peter Cuong Franklin: For every hundred people, there’s a hundred different opinions on how to cook something. People often strive for authenticity—but their authenticity is defined by whether they’re from Saigon, the Mekong, Hanoi, or places in between. Personally, I’m trying to get people to experience Vietnamese cuisine in a certain way. At Anan, you won’t see condiments on the table. We season the food already how we want it to be. I’d like people to let go, be open-minded, and experience things our way.

If we can go anywhere in the world to test out the cuisine, where should we go?

Peter Cuong Franklin: I have an aunt in Chicago who ran a restaurant for over 30 years. Her cooking is Vietnamese that incorporates Mexican ingredients like beans. There’s a big Mexican community there—something like a million people. She has Mexican staff; all the markets are run by Mexicans. So I’ll choose Mexico too.

Mexican food, like Thai food, is very bold. Vietnamese cuisine tends to be more balanced and less punchy. It’s more influenced by Cantonese and French cuisines, less so by regional cuisines like Thai. So, for example, when we make a curry in the south, I would say that’s a Vietnamese-style and not a Thai-style curry.

Every time I’m away and I come back to Vietnam it is a little different. How is it for you, as you come back less often?

Anh Le: I grew to really like the time when I came back to Vietnam between ‘95 and ‘97. Every time I’ve come back since it’s been a love-hate relationship. I feel like the slow life has disappeared and, although economic development was needed, life is moving too fast. Things have changed, including the food. With wealth, there’s more money to buy sugar for example, and food becomes sweeter. I miss the small local places and the old flavors. Or maybe I’m just a dreamer…

Peter Cuong Franklin: I think the north is very traditional and remains so. But I agree that Saigon is a very dynamic city, and the food is changing…like everything. Change is part of this city’s character. The question is how do you move forward while maintaining your traditions.

If we made a food show together, what would it be about?

Peter Cuong Franklin: As you haven’t eaten all the way across Vietnam yet, we should get an old car like a Citroen Dalat and drive around eating local food and making dishes in each place. Let’s take turns to cook something everywhere we go.

Anh Le: That sounds very good. I made a Danish food program in Vietnam with a similar concept in 2012. But for our show I’d like to connect to local people, interviewing them, and talking with them to compare life now and 20 years back. And why they cook the food the way they cook it.  So this show sounds great—but with you cooking and me eating!

If you were an ingredient or dish, which one would you be?

Anh Le: I would be a banana flower. As I get older, my sense of taste is becoming lighter and the banana flower has this delicateness and a soft perfume scent. It’s fantastic in soups and salads…and it’s beautiful!

Peter Cuong Franklin: On one side I’d be something simple and easy-going like a rice noodle, or banh cuon. Then on the other side, I’d be mam tom—something hard to love that you really have to get to know…