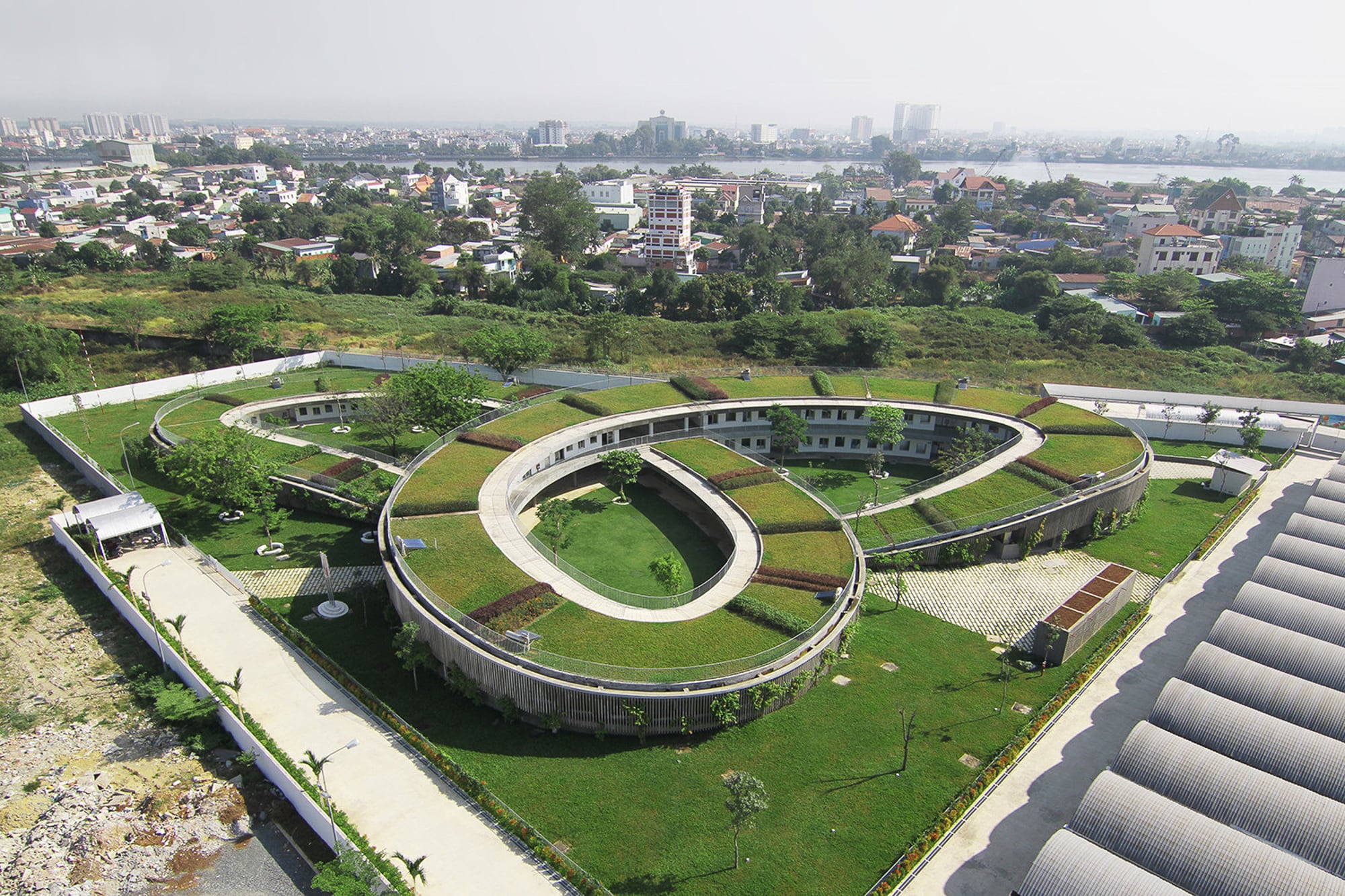 Intuitively designed structures like VTN Architect’s “Farming Kindergarten” in Bien Hoa are signs of a revolution in the realm of Vietnamese school architecture. Eye-catching architectural designs are rapidly becoming a signature element of the “new” Vietnam. This design trend, more often associated with apartments, offices, and restaurants has begun to impact the world of education.

When Vo Trong Nghia (VTN) Architects first began designing the private Binh Duong School in 2011—in partnership with architects Sanuki Daisuke and Shunri Nishizawa—other innovative schools began to explore how their spaces could change the way students in Vietnam learn and interact with each other, and the environment around them.

Vietcetera took a closer look at some examples of innovative Vietnamese school architecture. Our three educational spaces are sustainable, aesthetically pleasing, and a catalyst for educational growth all at the same time. To get a better idea of the benefits of each school’s unique design features, Vietcetera met with three of the architects behind the projects, Sanuki Daisuke, Takashi Niwa, and Dam Vu.

Binh Duong is a private middle school and high school tucked neatly into a forest 30 minutes outside of Ho Chi Minh City. Binh Duong province shares the same tropical climate as that major southern city—the only two seasons are wet and dry, and the weather remains hot all year round—so the structure of the school had to maximize comfort during both heavy rain and intense heat.

Sanuki Daisuke is an architect who worked on the school project with VTN—the celebrated Vietnamese architecture firm. “I joined the project later to help with more detailed design elements,” Sanuki explains. Although the building was already designed in a smooth S-shape, Sanuki looked for ways to create better circulation and more continuous pathways.

Binh Duong School contains two courtyards—one public, one private. “The private courtyard is relaxing and quiet, and it even features a pool,” the architect says. In contrast, the public courtyard was intended for noisier, more collaborative pursuits like play, meetings, or group conversations.

There were plans to separate the two courtyards with a wall-like structure. But on his insistence, the courtyards were connected. This way, he explains, “the building would maintain its theme of openness while allowing students to travel fluidly from one space to the other.”

The facility’s structure ignores any French-colonial influences on Vietnamese school architecture by opening itself to the surrounding environment. Because of the tropical climate nearly all of the structure of Binh Duong School is comprised of windows, holes, and barely-there facades—students can look out at the courtyard while on any floor of the building.

And during the rainy season, each floor remains protected while the hallways’ facades allow for natural ventilation during the downpour. According to Sanuki, “This feature is a necessary addition to any project involving Vietnamese school architecture given the tropical climate.”

The award-winning Farming Kindergarten brings sustainability and environmentalism into the realm of education, and it does so with a twist—literally. The school is private, but students pay little to attend. The children of poor factory workers fill this educational space. Constructed in Dong Nai province, the school’s winding roof forms three loops. Underneath are both sunny and shaded areas where children can play.

Designed and constructed on a low budget, the Farming Kindergarten sits next to a shoe factory and is meant specifically for the children of factory workers. An extra layer of sustainability was added when the architects decided to build a system that recycles the water the school uses for the school’s farming areas. Added to that, the school has no air conditioning—instead, it employs a design that encourages natural ventilation and elements like the greenery on the rooftop which provides natural heat-absorption.

The school, which was constructed with financial support from the shoe company as one of its social projects, is a prime example of climate-friendly Vietnamese school architecture. Added to that the school’s design provides a welcoming play-space for children and an opportunity for students to learn basic agriculture skills.

To learn more about the design process, we spoke with one of the building’s architects, Takashi Niwa. Niwa worked with both Masaaki Iwamoto and Vo Trong Nghia as a principal architect of VTN on this groundbreaking project.

Although Vietnam ranks 27th in world greenhouse emissions Niwa emphasizes the need for students to learn from an early age how to engage with their natural surroundings. “This is one step toward a more sustainable culture in the new Vietnam,” the Japanese architect explains.

At the Farming Kindergarten, greenery makes up a huge portion of the school’s land area. And students grow their own food on the rooftop. “When children study how to produce the food they eat,” Niwa says, “they feel greater connections to the products they buy at the market.” Community members can also volunteer at the farming space by watering plants and harvesting yields.

“The decision to place greenery on the roof stemmed from a desire to create a visibly sustainable environment”, Niwa adds. His team knew they wanted to create three courtyards, and so the looped shape of the roof helped to separate the different spaces. Despite the separation, students can still move freely between each section as they play.

“There are no trees on the rooftop due to concerns about safety, but the ground level of the kindergarten is rife with trees which provide natural shade,” Niwa continues. Beneath the rooftop lies a shaded staircase that serves as a makeshift amphitheatre. There, students can perform for one another and their teachers.

Niwa feels that school projects are especially meaningful, given the way that schools impact children’s futures and have the chance to shape the country’s future. “Through this project, I wanted to contribute to the country I now call home,” he smiles.

The structure of Kien Truc O’s newest kindergarten, which is like a giant lego house, has aroused excitement in the kids studying there.

Brick is a common feature of Vietnamese school architecture. Here, the building’s facade is made up of bare bricks arranged unevenly so as to form patterns and small openings for ventilation. Each section of brick is unique and strikingly arranged. This contrasts visually with the bold swaths of bright yellow and orange paint visible under the stairwells and inside the building.

The project’s lead architect, Dam Vu of Kien Truc O—who was also lead architect on the Chuon Chuon Kim Kindergarten 1 project—explains that the company transformed a run-down house into the interactive educational space it is today.

“The renovation process meant that the team and I had to work within pre-existing constraints. We had to improvise,” Dam Vu smiles. Nevertheless, he thinks their goal was to create a space that could bring rich experiences to the children that would populate it.

“The choice of raw bricks as a material for the outside of the building was the most fitting for this project,” Dam Vu explains. “The brick exterior reminds me of the lego blocks that children play with, while at the same time appearing just-built or still in construction.”

The architects designed the erratically staggered brick facade to allow wind to flow in from the bottom-most floors. In order to shield the indoor areas from sunlight, the brick formation is spread thin at the base and more densely on the higher floors.

The best features of the building, Dam Vu says, are indoors.

“Each floor has a different feel, and all stand in contrast with the tranquil brick exterior. Classrooms are more colorful than older Vietnamese school architecture and spaces are open for children to play freely,” the architect adds.

From the garden below to the upper floors runs a spiraling staircase that reflects the playfulness of the structure.

Inside the school, each floor is different. But the overriding purpose of each space, according to the architect, is to promote meaningful interactions between teachers and their pupils as well as encouraging children to explore the building—to embrace their curiosity and learn from it.

Another inspiration for these spaces was caves. According to Dam Vu, “Caves inspire adventurous souls and allow little explorers to better appreciate access to light, wind, and colorful spaces.”

Binh Duong School inspires students with its openness, kindergartens like Chuon Chuon Kim Kindergarten 2 allow children in Ho Chi Minh City to explore smaller spaces without sacrificing natural airflow and the freedom to play, and Farming Kindergarten connects its learners with nature in a low-cost learning space. From their open facades to their environmentally- and socially-conscious designs, these current innovative approaches to Vietnamese school architecture may lead to even more inventive learning space designs in the future.