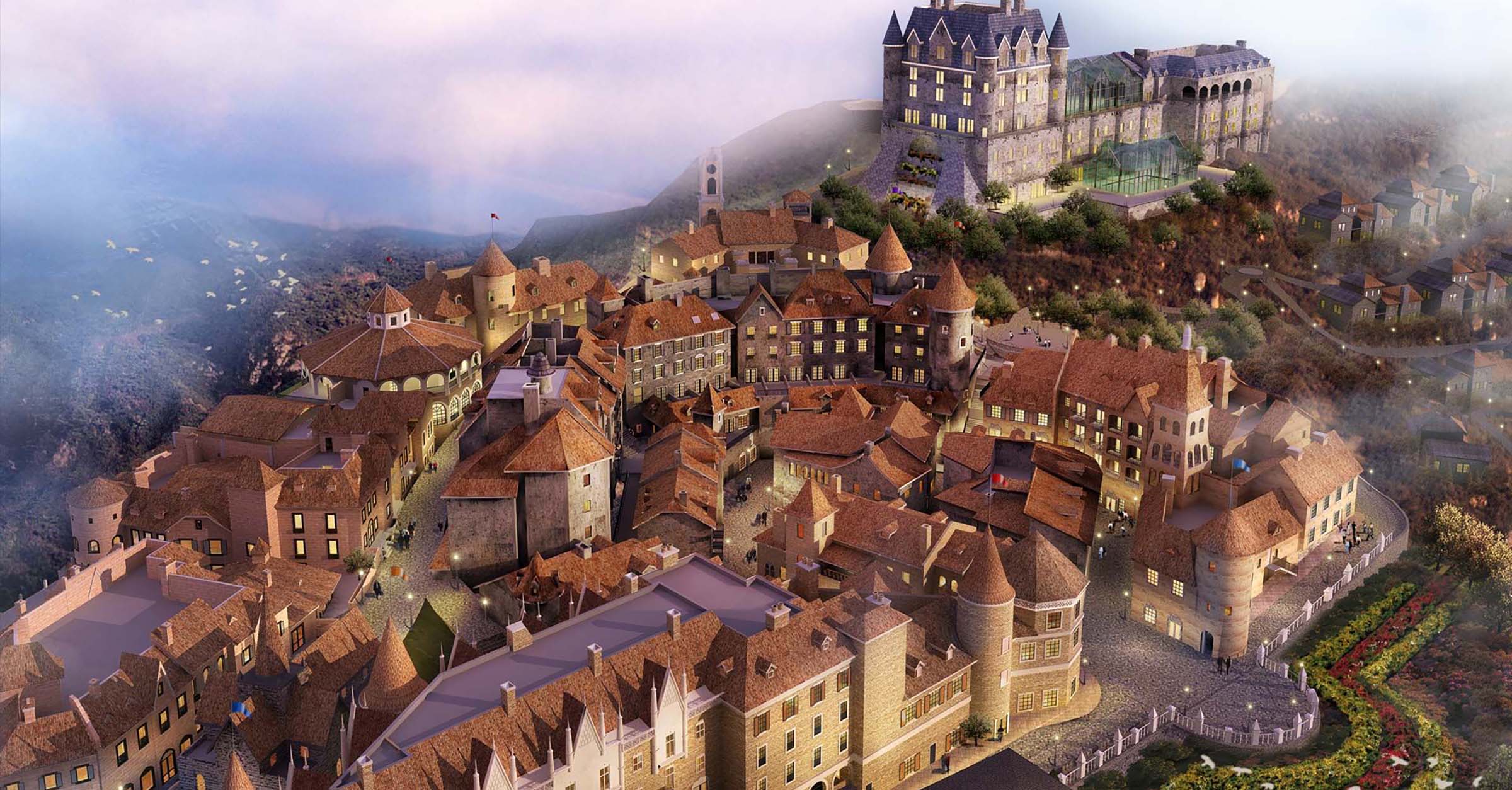 The Bana Hills of Danang are 25 kilometers southwest of Danang’s city center at an altitude of 1,487 meters. Most visitors make their way to the popular surrounding sites via the two-time world-record breaking cable car system. From there, it’s suggested to explore the Bana Hills Fantasy Park, Bana Hills Resort, or the beautifully restored French colonial architectural sites—first discovered by the French in the early 1900’s. And there’s also the Golden Bridge that’s supported by the “hands of the Gods” that opened in June.

For many, the ride to the top of the summit is one of the most highly-cherished experiences in the Bana Hills of Danang.

Not long ago, the region’s cable car system boasted two Guinness Book of World Records, although they have since been surpassed. At the time, their top-of-the line cars ranked as the world’s longest single cable car system spanning 5,042 meters, and held the additional title of the world’s highest gap between the departure and arrival stations. From base to summit, the official measurement recorded a height of 1,291 meters.

The glorious journey upwards takes about 20 minutes and soars well above the cloud line, making way for a rare glimpse at some of the best viewpoints in central Vietnam. Upon your ascent, guests will witness the country’s rich biodiversity, massive waterfalls, and enjoy a bird’s eye view of the ocean waters below.

I got off at the first stop of the cable car. And rather than taking the next lift up to the main site, I decided to walk.

It was on this walk that I encountered remnants of old villas. Juxtaposed with the carefully-aged castle and its inventively aged ramparts, there are ruins and faux ruins that make for strange bedfellows. The true past in actual ruins, its modern kitschy version just above it, was glowing in the midday sun.

I was pulled to the actual ruins, but no paths lead there and I could see they were simply ramshackle walls, shells of the past, containing only plots of overgrown weeds. So instead, I clambered my way upwards to the novelly constructed castle with its quaint fortification.

Ba Na Hills capitalizes on a new model of instagram-able tourism, trips that favor the photographic recording of the experience over the experience itself. Facades and surfaces are given precedence and can take the place of reality. Black iron street lamps and crumbling stones form street scenes. New buildings, made to look old, are placed under certain camera filters and take on a fine, classically-aged look. Actually touching the buildings of this French village reveals lacquer and concrete, sensations just slightly off from those provided by crumbling stones of old French villages.

For the kids, the resort has a concrete mountainous cave whose three floors contain a large video game arcade. Several themed spaces are reminiscent of Universal Studios, rides that celebrate movie sets, including a Jurassic Park room, and a large souvenir shop centered around a three-leveled rotating swing carousel.

You can ride down from the highest station to the lowest station on a tracked sled course, the same tourist attraction that’s now featured at many historical sites around the globe. There are themed buildings on site, including stations named after and resembling train stations in Paris. Perhaps the only original structure is an old French wine cellar built in 1923, which is still preserved.

A grand fountain makes up the main square, offering a view of the town below, the largest structure on site, and a cathedral complimented by wood pews and stained glass interior.

A nearby hotel houses a European garden and a luxurious grand verandah that juts out onto a precipice, overlooking the countryside. Statues of mythical Greek gods and creatures adorned both sides of the outlook, giving an impression of Mt. Olympus.

A Replica Europe in Vietnam

Vietnamese kitsch is connected to a willingness to adopt what’s most compelling about other countries’ pasts. It’s easy to simply poke fun at this attempt to elevate through half baked imitation. It’s much harder to consider how this act is both a striving for authenticity and an honest acknowledgement that the copy could never replace the original, but this is ok for many.

I recall my first encounter of authentic copies on my return, when I went to an amusement park just outside of Ho Chi Minh City that boasted the largest banyan tree in the country. The tree was a part of many other curiosities, like the natural streams and stone bridges, complete with curving concrete tree stems.

When I discovered the “largest banyan tree in Vietnam”, it was worthy of celebration, but not, as its moniker suggest, the largest in Vietnam. In fact, its roots were attached to painted stone stems and a concrete platform.

I wished I could have asked the artist their thoughts on making the “largest banyan tree”. Bana Hills is in many ways like this “extended” banyan tree. It exists as an extension of an old French colonial settlement set against the backdrop of modern travel.

It captures the visual texture of olden French towns. It’s medieval Europe made glossy for photographs, placed squarely in the midst of Vietnam. When focusing the camera a certain way, you can truly appreciate the grandness of the facade and the audacity of the imitation.

Ensuring the path, stable as it stands. Lifting it up, with two giant hands. #smashpopvietnam #smashpopmavic

The bridge is 150 meters in length and curves over the lush greenery around this former hill station. Since opening, the bridge has been a viral sensation—which has even caught the bridge’s principal designer of TA Landscape Architecture, Vu Viet Anh, by surprise. But the designer is already planning a second silver bridge that connects to this structure.