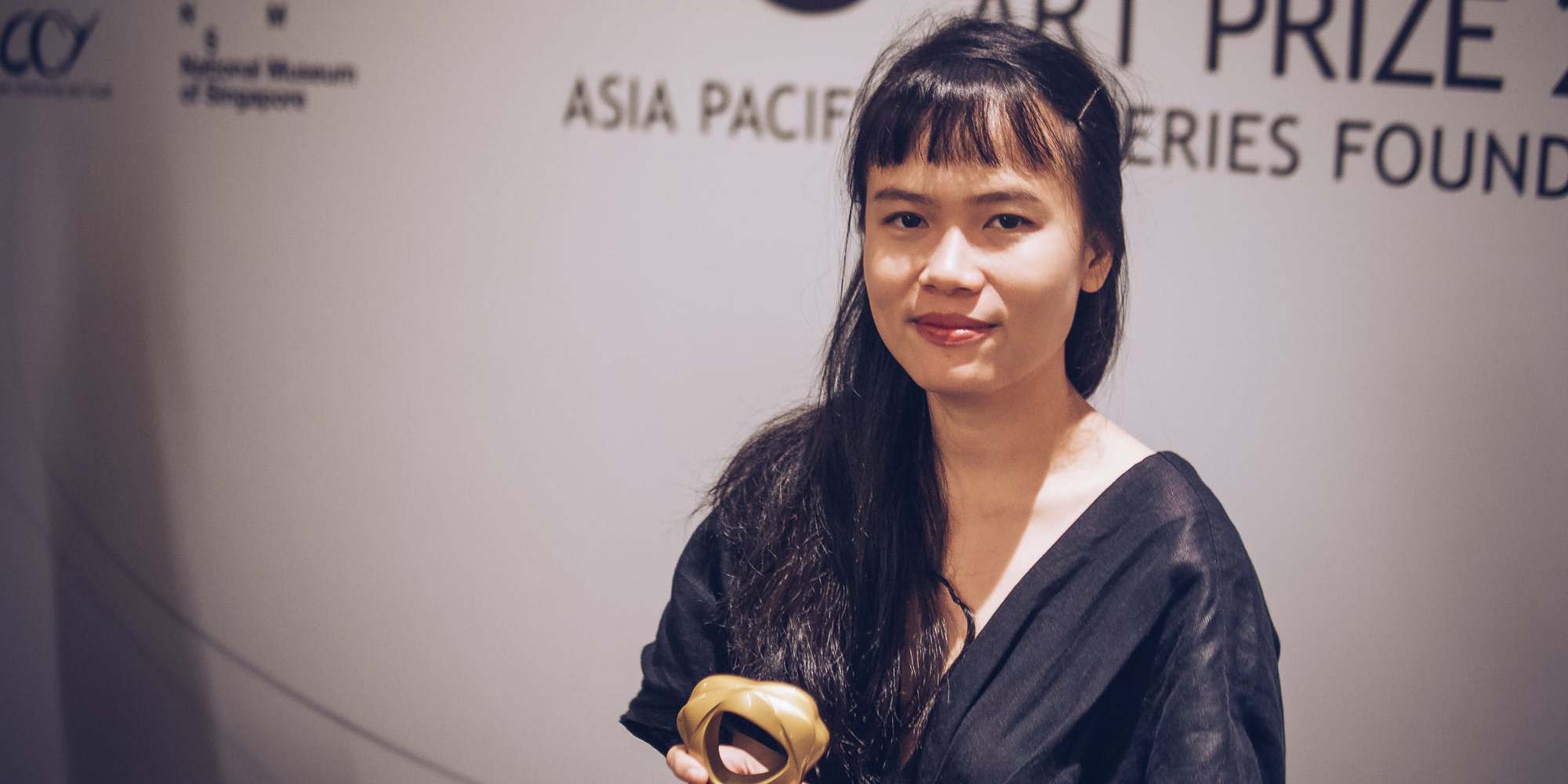 Vietnamese artist Phan Thao Nguyen won the APB Signature Art Prize 2018 Grand Prize with her work, “Tropical Siesta.” And Vietnamese-American collective The Propeller Group is another of the 15 finalists at the triennial awards with their “AK-47 vs. M16.” Both works fit the contemporary art trend towards works that explore history—and Phan Thao Nguyen’s work added even more layers of myth and meaning.

“For Vietnamese contemporary art at the moment history is an important topic—that’s because of the complexity of the country,” Phan Thao Nguyen told Vietcetera after receiving the award and the SG $60,000 prize for her two-channel video and six paintings.

Her work, which “exhumes the poetry of Vietnam’s forgotten history”, fits beside the works of other finalists like Singaporean Shubigi Rao—whose installation is about the destruction of books—the cinematic “Kris Project” by Au Sow Yee, and “Milky Bay” by Yuichiro Tamura—an exploration of the body that references the work of Japanese writer Yukio Mishima.

With its two entries Vietnam is the best-represented country at the APB Foundation Signature Art Prize 2018 along with Japan, which also has two. The East Asian cultural powerhouse has an established art scene. Japanese artists, like Yayoi Kusama and Takashi Murakami, cross over into mainstream media with uniquely Japanese post-war art pieces. Murakami has been called the Japanese Andy Warhol, and Roberta Smith wondered if Kusuma’s “amazing polka-dotted, selfie-made journey to greatness” made Kusuma the world’s greatest artist to come out of the ‘60s.

In Vietnam, art has had licensing and authenticity issues, and an education system that focuses on traditional art forms and techniques.

“Practising contemporary art in Vietnam is not easy—there’s a lack of institutional support. The Museum of Fine Art would never show contemporary art, and in art school, you can’t paint abstract, and you can’t do installation or video—but art schools do have other strong points which I value…so I’m not complaining,” Phan Thao Nguyen smiles.

Locally, the unpredictability around staging art shows has restricted the growth of galleries and opportunities for artists.

“Artists in Vietnam are very committed…but they haven’t been able to show the work the way they want to,” Phan Thao Nguyen elaborates.

But this appears to be changing. Last year’s licensing of Vietnam’s first nude photography exhibition perhaps signals a “lighter, softer” stance towards the arts in Vietnam. And this year, San Art have re-emerged at A.Farm—a partnership with Mot+ and the Nguyen Art Foundation.

The project will host seven concurrent artist residencies and a year-round arts program. A.Farm’s soft launch was celebratory, welcoming any artists “whether professional or non-professional, young or old, emerging or established to install their works.”

The number of overseas Vietnamese, foreign artists and curators, and local Vietnamese engaging with the creative industries has never been greater. The growth of this creative scene in Vietnam has been mapped by a British Council project, led by researcher Ly Truong, which tracked the growth of creative hubs—physical or virtual spaces bringing creative people together—in Vietnam.

Although the “foreign factor” was a contentious issue in Ly’s reporting, the importance of Viet Kieu—overseas Vietnamese—plus Western creatives and curators in the growth of the arts is undeniable. As is the emergence of Vietnamese exploring their own identity more deeply.

The British Council’s head of arts and creative industries, Thao Nguyen, admitted to us that some hubs had remained off the latest report’s radar, but that the number of hubs still leaped from 40 in 2014 to 180 in 2018.

The Propeller Group are one example—“an artist collective and continually evolving brand.” Its three members are Phunam Thuc Ha, who studied in Bangkok, Chiang Mai, and Hanoi; and Tuan Andrew Nguyen who studied Fine Arts at the University of California, Irvine where he met Matt Lucero who was studying at the California State University Riverside.

The Group “get[s] ingested into the bellies of big social beasts such as television, advertising, or the various manifestations of pop culture.” The combination of artists, all of whom were born in the mid-’70s, allows the Group to ask “larger questions pertaining to culture and the human condition.” But a starting point was the clash of weapons in the conflict in Vietnam—the ”AK-47 vs. M16.”

Millennial artist Phan Thao Nguyen—who was born in 1987—produced her work “Tropical Siesta” with children in Gia Lai province in the Central Highlands. The young characters who live in “communes and work in self-sufficient farming communities” poeticize her mythical narrative that hints at the traumas of land reforms, conflict, and colonialism in her home country.

“The support from Rolex gave me the financial support to focus on making my work, and the opportunity to work with my mentor, which really shaped my work conceptually,’ Phan Thao Nguyen continues.

“I guess my work is very personal. I’m interested in narratives and literature. And also moving images and painting. The Propeller Group uses the topic of Vietnam, that relates to ideas of bigger power systems, such as the Soviet Union and the States. It’s broader,” Phan Thao Nguyen continues. “Somehow The Propeller Group—because it’s a collective of three people with diverse backgrounds—represents a different way of thinking to my perspective.”

The achievement of these two Vietnamese artworks reaching the final and one winning the Signature Art Prize 2018 appears to be regional recognition of the growth of the creative community in Vietnam driven by different voices and perspectives—like Phan Thao Nguyen’s and the Propeller Group’s—and Vietnamese artists being representative of the regional art trend for works focused on history.