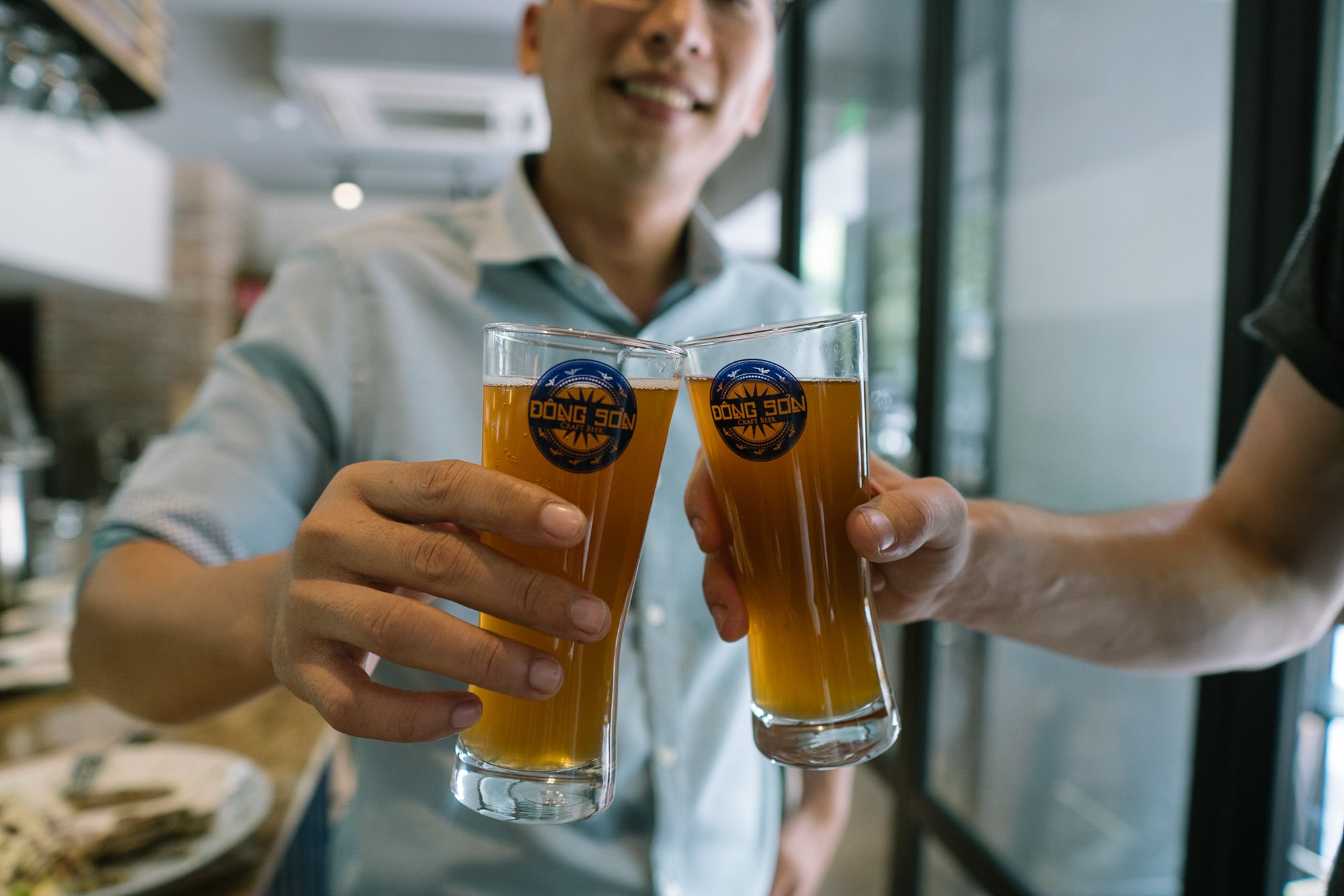 Dong Son Craft Beer, or, Bia Thủ Công Đông Sơn, as said in the local tongue, is a Vietnamese craft beer made to enhance the experience of family-style eating and drinking. Although it wasn’t until around 2014 when the country’s craft beer scene started gaining noticeable traction, the craft beer industry in Vietnam has continued to blossom in the years since. As more Vietnamese brewers rise into the foreground, what constitues “Vietnamese craft beer” is coming into focus.

Vietnam is home to an estimated 35 breweries and counting. Industry development is expanding at a rate so fast it’s hard to keep up. It’s a weekly occurance to hear information about a new brewery launch, another craft beer bar, updated rotationals, and most recently, the frenzy surrounding the arrival of new international imports from Stone Brewery, BrewDog, and Melvin Brewing.

On the other side of imports are the many Vietnamese-ran and operated breweries that are now producing what could be callled “Vietnamese craft beer”. Phan Dzung, the founder of Dong Son Craft Beer, is one of the first few to present craft beer in a new way—the Vietnamese way.

He’s invited our team to meet him and cheers to his newly designed bottle at Butcher Manzo and Craft Beer on 17/13 Le Thanh Ton Street. There, he tells us about his brand Dong Son Craft Beer, the burgeoning craft scene, and his defintions of what constitue a “Vietnamese craft beer” brand.

What was your first experience with craft beer? How did Dong Son Craft Beer come into being?

I started my love affair with beer when I worked for a large-scale brewing supply company. Eventually, in 2015, I transferred from Danang to Ho Chi Minh City and that’s right about when things began to click. I began as the supplier for Pasteur Street Brewing Company, and was inspired by their brewing philosophy. The approach was different from what I was accustomed to. They were experimenting with recipes to create their own kinds of hop and taste profiles. The mission was to bring something new to the table, something that neither Vietnamese drinkers or foreigners had tasted before.

After that, I was lucky enough to meet Nguyen Anh Dung, the former CEO of Sabeco – Bia Saigon—Vietnam’s legendary 142-year old brewery. By getting to know him, I learned a lot about the ins and outs of the indsutry. This helped me realize there was massive potential for market expansion in all beer sectors, and left me thinking I needed to start my own Vietnamese craft beer brand.

I took everything I learned throughout my time in the beer industry and used it to formulate my own concept for a Vietnamese craft beer. After time, research, and lots of batches gone bad, I eventually launched Dong Son Craft Beer. It wasn’t until 2017 that we released our first flagship beer—the Dong Son Golden Ale.

In your opinion, how is craft beer and commerical beer different?

I think the biggest difference is the production model. Craft beer works on a much smaller scale and with fewer automated machines. With that in mind, microbrewing gives you absolute freedom. The only recipe to follow is the one you are writing, and even that changes, especially when you’re still learning.

Mainstream beer is simply mass-scale replication of a single recipe. Drinkers expect big brand beers to taste exactly the same everytime. Trying a new style of beer can realign a beer-drinkers’ perception of what ‘beer’ should taste like. The power of craft beer is that it always exceeds expectations. To beer lovers uninitiated to craft beer, the IPA might not even seem like ‘beer’, but after another sip or two you can see the wheels turning in their head. They are thinking about it. Many Vietnamese drinkers take to diverse styles of craft beer extremely quickly.

Dong Son was an ancient culture in northern Vietnam during the Bronze Age. How does this connect to your brand’s indentity?

The bronze drum is a symbol of the thousand-year-old Dong Son culture, which was centered around the Red River Delta in northern Vietnam. I want Dong Son Craft Brewery to capture that ancient spirit. They were skilled agriculturalists as well as craftsmen; the bronze-cast Dong Son drum is a testament to their artistic abilities.

To me, the Dong Son drum is symbolic of modern Vietnamese craft beer culture. The process of brewing craft beer is emblematic of those times past because it is a reflection upon the incredible skills of Vietnamese people. There must be skilled agricultural employees working alongside artistic craftsmen to create a high-quality Vietnamese craft beer. I see a beautiful and timeless parallel between the Dong Son drum and some of the inventive beer coming out of Vietnam.

What is the mission of Dong Son Craft Beer?

Our mission is to develop craft beers that are tailor-made for the Vietnamese climate and make for an ideal pairing with traditaional Vietnamese food. In terms of philosophy, we believe we must execute with precision in order to find success in a market with so many shifts and trends. We must perfect 100% of our recipes before we can distribute. Dong Son is currently only available in Ho Chi Minh City, but another mission of our’s is to have our beers on that refrfrigerated truck ready for our first shipments to Dalat, Danang, and Hoi An. You can expect that to happen before the end of the year.

Vietnam is now home to roughly 35 craft breweries. How will Dong Son Craft Beer stand out from the pack?

We’re not the first ones to make craft beer in Vietnam. I love so many of the Vietnam-inspired, locally-brewed, but foreign-made craft beers. That kind of craft beer is delicioius, wonderful, and inspriational, but it is on an entirely different path than Dong SonCrft Beer.

Since we are Vietnamese we are able to enjoy a stronger connection to Vietnamese people. We are focused on the continutaion of Vietnam’s tradition of eating and drinking in big groups with friends and family. My job is to introduce and infuse high-quality craft beers into the equation. The beer is used to supplment your mean and vice versa. To me, that is a step up.

What makes the Dong Song Golden Ale ideal for the Vietnamese market?

Aside from food pairings, we want a drinkable beer that goes down super easy. We grew up with that kind of beer and most locals have a fondness for lighter beers like lagers. Considering most of the Vietnamese population are used to simple and classic, we decided the Golden Ale would make for a perfect first flagship.

We want the Golden Ale to be the kind of beer the Vietnamese drink when going out for long “nhau nhau” sessions. It would make the entire experience a little more bold…and delicious.

We noticed your social media posts are often food-focused. Explain why craft beer food pairings are a focal point of your marketing strategy?

Pairing food and beverage is an important part of Vietnamese culture. We rarely just drink. Instead we prefer to eat and drink together in big groups with friends and family. That is why craft beer and Vietnamese food pairings are at the core of our marketing strategy.

Recently, Nguyen Thanh Hai, the owner of Nong Trai Khoai, served me a Dong Son Golden Ale with bun cha Hanoi and I was impressed with how well they went together. Bun Cha is meaty but light, and a little bit sweet. Dong Son is slightly bitter, just like any beer, but the sweeter notes that follow really complemented the dish. The flavors all perfectly  coelesced at the end.

Right now, you sell the Golden Ale. Are you planning to brew more styles in the future? If so, what are you working on?

Yes, I’m working on new styles. I will keep the original Golden Ale as my flagship beer, but I’m brewing some classic craft beers just for the Vietnamese palate. These will include an IPA, Kolsch, Hefeweizen, and Pilsner. Most of my free time is spent searching for traditional Vietnamese ingredients to experiment with. I want the profile of the craft beer to exenctuate and help identify common Vietnamese flavors, not override them. Keep an eye out for some of our new brews in 2019.

Where should we go to drink Dong Son Ales?

We’re available at almost 100 locations in Ho Chi Minh City now, so there are plenty of options. If you want to go out with a big group of friends and party I’d suggest a visit to  Lao Tru BBQ. If you’re looking to just relax and take it easy, head to Nong Trai Khoai. For something more upmarket but still casual, I’d go to Rehab Station – Not a gastropub in Da Kao ward.

These guys right here at Butcher Manzo! They’re in the middle of Japantown at a great location. The menu varies with pan-Asian, Japanese, and Italian options, and the bar is loaded with Dong Son Golden Ale alongside TeTe, Roosters Beers, Pasteur Street Brewing Company, Heart of Darkness, 7 Bridges, East West Brewing Co., and Winking Seal.