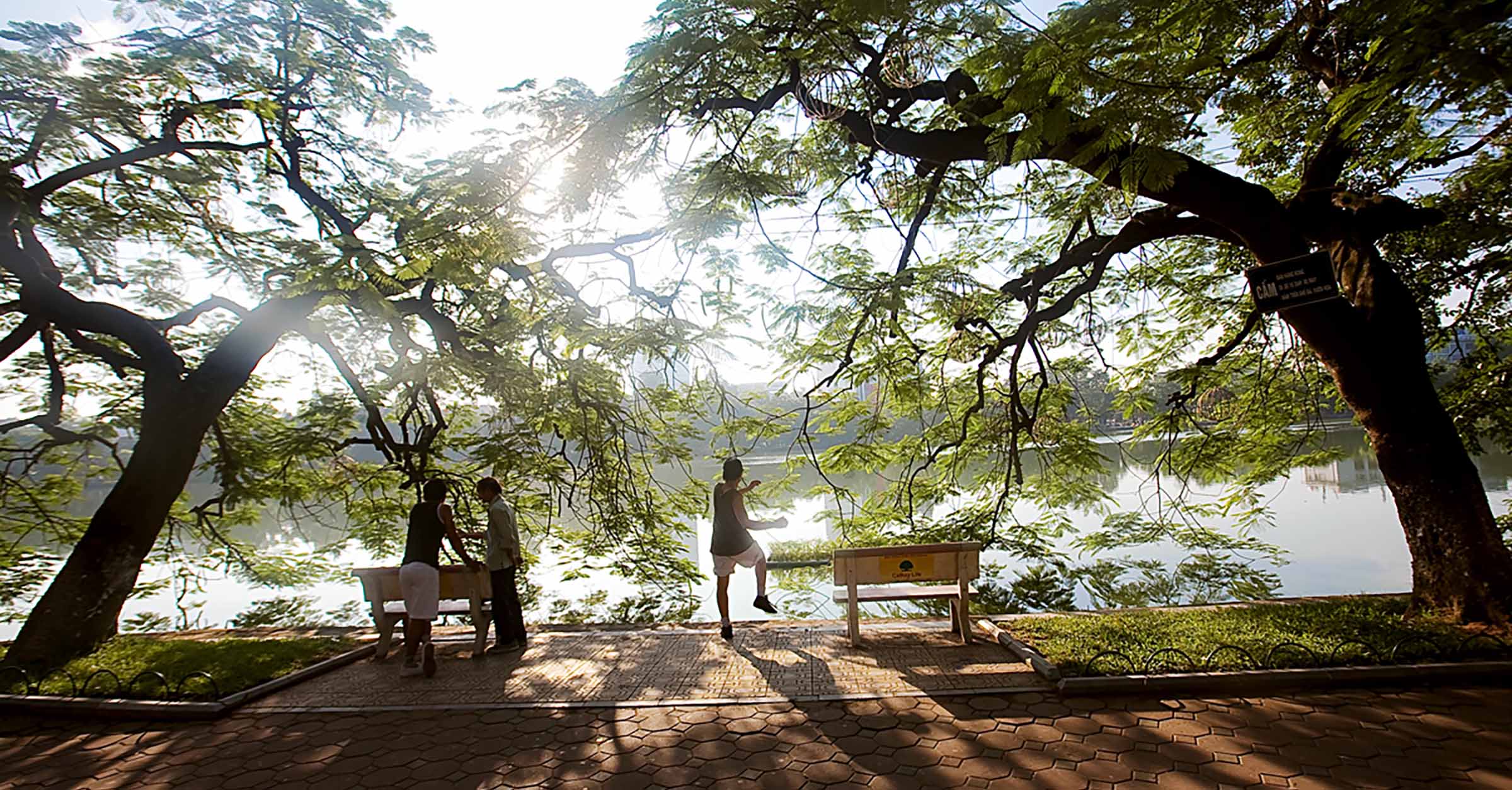 For many years now, the dancers of Hanoi have become an integral part of its early morning scene. Take a walk around hotbeds like Hoan Kiem Lake or West Lake and you will find them in all kinds of groups and dance styles.

As you walk around the lake, breathe in the early morning’s fresh air. Listen to the stranded tunes and you will walk away with a different outlook of Hanoi that is more known for its traffic and heat in the mid summer afternoon. This morning is so tranquil that one will find it hard to believe it is the same city just an hour later.

Hanoians are crazy about exercising. Though the Western gym culture has become more prevalent with the younger crowd, it has yet to resonate with the older crowd, who bring their exercising needs out onto all corners of the street, preferably around lakes. Women also seem to take up a considerably larger proportion than men. Despite this, you’ll see a few fresh faces sprinkled among more experienced ones. And you’ll occasionally catch sight of groups of men working out too.

Age and gender play a large role in the exercises one chooses to perform. Old men like to jog. While men in their thirties prefer more physically activities such as push-ups, squats, and planks, or work out with the gym equipment set up right at the corners of every street.

Women, on the other hand, are inclined to do more team exercises. Often a group of twenty women in shorts and tank tops will follow the lead of an instructor, dancing to the music. Each group has its own styles and music and sometimes the dancers don’t even know what styles they are dancing in or what tunes they are dancing to. Whatever it is though, it always involves a lot of hip swaying. Popular dances like Gangnam Style are also re-enacted with dubious quality. The older women however, may opt for something less vigorous and more soothing; Tai Chi Chuan fits this need and is also very popular.

Not all follow conventions however. The exercisers, coming from all walks of life, invent their own exercises, making use of ready landscape such as stone benches. There’s a man abusing a stone bench, alternate between kicking and elbowing it. With a dose of Vietnamese creativity, the variations are endless. The next one no less comical than the last. Even though some of the methods are questionable in their therapeutic effects, the exercisers retain an unshakeable belief that going out here every morning, breathing fresh air and stretching their muscles has dramatically improved their health. For the middle age groups, it relieves stress from work. The old people claim that it helps them sleep better. It isn’t surprising when they return here every day without fail. Some seniors have even done this for 20 years.

But people don’t come here just for the exercises. For many, this is also a chance to socialize, to meet new people and catch up with friends. Women in the same dance group are often friends, and though the session begins at six, some come as early as five to chat with others. One of their favorite subjects is the upbringing of children and grandchildren.

This morning exercise culture is so pervasive in the city that it has become something uniquely Hanoian. The participants are not afraid to get goofy. It brings a fresh smile not only to their faces but to the onlookers as well.