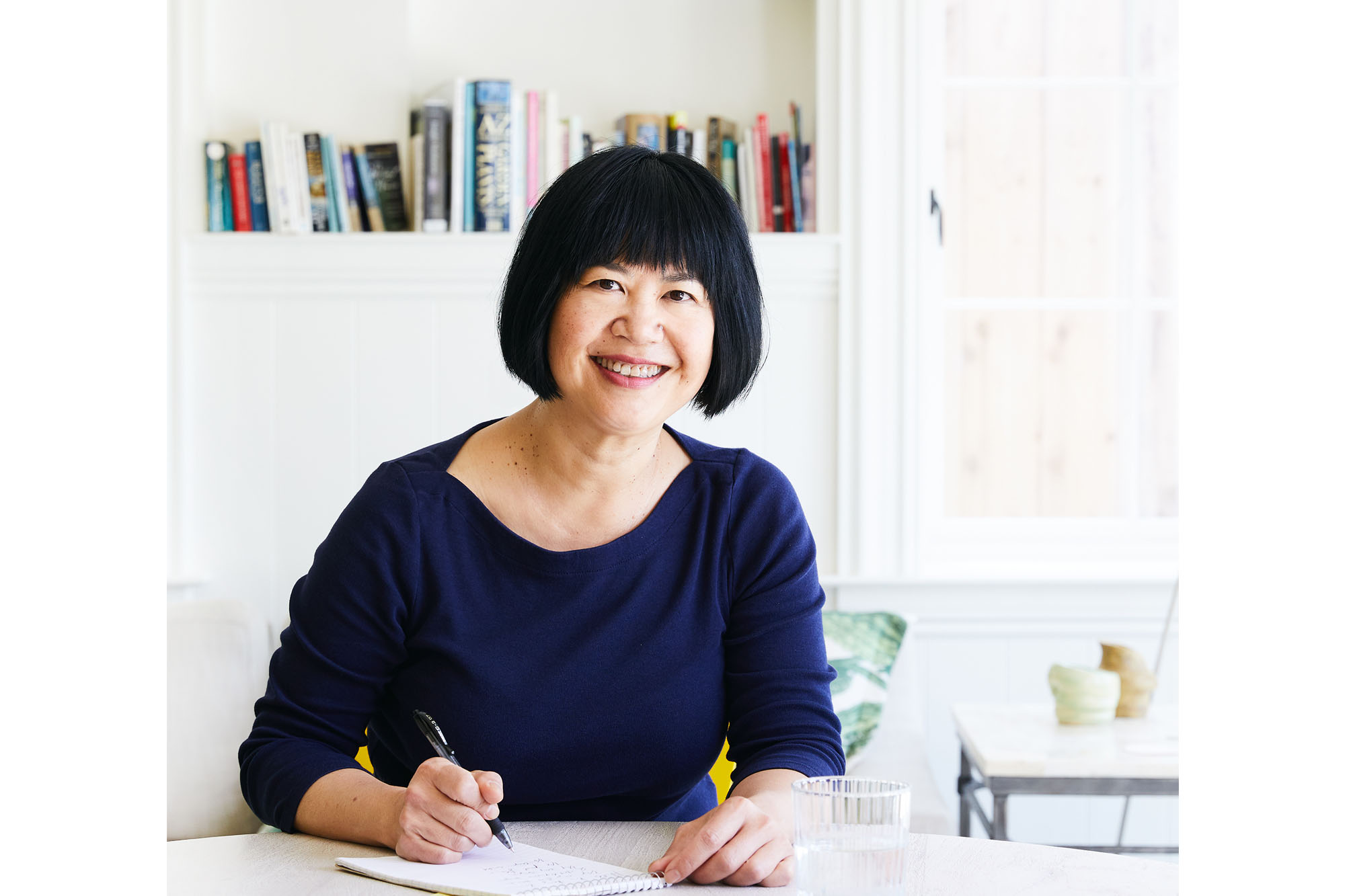 Andrea Nguyen might well be considered the Julia Child of modern Vietnamese cooking. She has authored six cookbooks and countless magazine features in addition to running an immensely popular food website. For the last two decades, Nguyen has been the noted authority on introducing, interpreting, and even innovating Vietnamese cuisine for American audiences.

But while Child, the first woman to ever have a cooking show, empowered women in a pre-feminist world, Nguyen’s writing offered visibility and credibility for food and culture still deemed “weird” by mainstream America. It is a masterclass on service journalism rooted in context and history. Today, many of us Asian-Americans in the culinary space have Nguyen to thank for paving the way and demystifying our food.

Like most Gen X Viet kieu, Nguyen was born at the height of the Vietnam War She fled the country with her family in 1975 when she was just six years old. They relocated to San Clemente, California, which she describes as being “close enough to Little Saigon that we could get Asian groceries” but far away enough that “we had to figure out how to assimilate in American culture.” The bi-cultural upbringing would benefit Nguyen. She speaks English with no discernible accent while also speaking enough Vietnamese to get by in an interview.

“My parents always said that for us to be successful in America, we needed to figure out American culture and function well in it, while also retaining our Vietnamese culture,” Nguyen tells Vietcetera. “Early on, they didn’t even want us to marry out of our culture. My dad is a highly rational man, but he didn’t think that kind of marriage would work.” She adds, with an amused chuckle: “Of course, my husband is white and only two of my five siblings married Vietnamese people!”

Nguyen discovered her obsession with food and cooking at a young age, recalling magazines like Good Housekeeping and Woman’s Day that her mother would use to help decipher unknown ingredients and seek workarounds for the dishes they knew and missed. Eventually, Nguyen’s sisters joined the local library cookbook club. It offered new members the first three books at a dollar apiece before raising the rate. She laughs remembering how the siblings each took turns signing up so they could take advantage of low prices.

“We were all so curious about how to use things like sugar, white sugar, or wheat flour—ingredients that had been expensive and hard to obtain back in Vietnam that were now readily available,” Nguyen says. “We got a copy of Irene Kuo’s Key to Chinese Cooking and Julia Child’s Art of Mastering French Cooking. I’d read them in the afternoons after I came home from school.”

Despite that upbringing, writing a cookbook was not originally on Nguyen’s radar. After graduating from the University of Southern California with an M.A. in communication management, she worked in bank auditing and college administration. In 1997, she published her first book, Trip to Freedom, a memoir about her family’s journey following the Fall of Saigon. Although her father offered her an avenue to enroll in culinary school, Nguyen said she opted for safer choices because of her immigrant mentality.

“Being a part of that 1.5 generation, economic survival was all-important because if you can’t make money in this country, you’ll die or worse…be a loser,” Nguyen says, jokingly referring to the prevailing attitude among those, like herself, who were born in Vietnam but spent their formative years in the States. “My mom would always say, ‘What do I tell people when they ask what you do?’”

Still, Nguyen nurtured her inner passion for food where she could. In between her other jobs, she’d spent a year working in catering and cooking at the now long-shuttered City Restaurant under legendary toques Mary Sue Milliken and Susan Feniger. She calls it “the hardest work I’ve ever done—hands down.” When Nguyen and her husband moved from Santa Monica to the countryside near Santa Cruz, she found herself unable to land a full-time gig. Inevitably, she took it as a sign to launch her website, the now immensely popular Viet World Kitchen.

“I couldn’t get a fucking job. Everything required going to the university in town or commuting to Silicon Valley,” Nguyen explains. “So I started gardening, making butter and rendering lard, and building a website dedicated to food.”

Nguyen’s work on the website landed her first magazine story in Saveur, and ultimately her first book deal with Ten Speed Press. In 2006, she released Into the Vietnamese Kitchen, a landmark text and the first-ever full-color, English-language cookbook dedicated to Vietnamese food. In 2007, Nguyen earned, for the first time, a nomination for the industry’s highest distinction, a James Beard Award for “Best Asian Cookbook.” By 2018, after a decade of many nominations, Nguyen’s The Pho Cookbook won the coveted award.

“I’d been rejected from landing a cookbook deal because I hadn’t been on food TV,” Nguyen reveals. “I’m part of that generation where we didn’t know anything—I didn’t know you had to be New York to be in food media. I didn’t have an agent. I didn’t think I could do this full-time. But I had a sense of the Vietnamese term ‘mơ mơ,’ where you just figure things out. Into the Vietnamese Kitchen was the book I’d been wanting to write for a very long time, and it got a great response.”

They say many people have one book in them, but not so many have a second. Since her debut cookbook, Nguyen’s written five more, narrowing down with deep dives on dishes like dumplings, tofu, banh mi, and pho. She recalls one of her proudest moments as the time she was cited in a clue on the show Jeopardy for her work with The Pho Cookbook.

“It was like, ‘Oh my god, my work actually attracted this very mainstream thing,’” Nguyen says. “I’d had validation from my peers, but then there came this validation from mainstream society that speaks volumes about where Vietnamese food has gone.”

But it’s Nguyen’s latest book, Vietnamese Food Any Day, released earlier this year, that has truly cemented her staying power as a cultural commentator for the modern era as much as an accomplished cookbook author. In a recent interview with Saveur, I named the book “a seminal work for Vietnamese cooking” for its increasingly un-rarefied notion of what Vietnamese food can be—not some precious and inaccessible thing made exclusively by old aunties, but a modern and dynamic cuisine that literally anyone can try at home.

Here, Nguyen dabbles in recipes that include microwaves and store-bought rice crackers (gasp), candid anecdotes about her mother’s ingredient hacks, and a refreshingly relaxed and nuanced perspective on authenticity. “As long as someone respects the food, understands the tradition, and appreciates the work that it takes to make something, it doesn’t matter what your DNA is.”

It makes sense, given Nguyen’s own complex layers of identity. For her, identity is likewise not a zero sum situation. “Because I left Vietnam so young, I’ve never had a deep sense of a hometown or native country—quê hương is more abstract for me than for other people,” Nguyen explains. “At the same time, I still struggle with American notions since I wasn’t born here and not raised by people who were born here. I fumble colloquialisms all the time. But in the midst of all that loosey gooseyness, I formed my own identity, and it touches on all the cultures that have touched me during my life. For example, I learned Spanish and Chinese so those cultures impact who I am. I’m a Californian. I’m a lapsed Catholic. I meditate daily. I’m married to a non-Vietnamese person. I serve on the board of the Southern Foodways Alliance. I’m many things, just like anyone else.”

Pointing to the borderlessness of the Vietnamese diaspora, Nguyen says much has changed since her first book in terms of what is considered Vietnamese food. Take, for example, Vietnamese-Cajun crawfish in the States or new dishes in Vietnam like bánh tráng nướng. But unlike many in the old guard of American food media, Nguyen doesn’t just recognize the new culinary world order—she embraces it.

“This transnational thing is so exciting—I see young chefs like Dennis Ngo of Di An Di in Brooklyn, who is obsessed with sourcing difference types of hard-to-find banh trang from places in Vietnam. Or Nguyen Coffee Supply, where you’re taking a very artisanal approach to the beans,” Nguyen says.“This is the stuff that’s really innovative, and it’s thanks to global communication and social media that these ideas are shared.” (Editor’s note: I work with Nguyen Coffee Supply, which has no relation to Andrea Nguyen).

Last month, Nguyen collaborated on a dinner with Dennis Ngo at Di An Di to celebrate the launch of her latest book. Present in the crowd was nearly every chef and restaurateur in New York’s Vietnamese restaurant scene, which is undergoing a modern renaissance with new players like Madame Vo, Van Da, Hanoi House, Bep Ga, and Saigon Dep. It was a testament to Nguyen’s influence with even the younger generation of Vietnamese-American chefs born in the States.

“Everyone was looking at me like I was wearing this halo and shit!” – laughs- “But I’m truly honored and humbled and flattered by the acknowledgement from folks in the younger generation that what I do actually matters.”

For Nguyen’s part, she says she’s reached the stage in her career where she could write about different subjects — both within Vietnamese food and beyond. Whatever that may be, she says she wants it offer meaningful contributions that inspire future generations of writers and authors.

“I do feel like I should have a hand in helping shepherd this culture of mine—because it means something to other people,” Nguyen says. “Vietnamese food doesn’t need to be elevated. It’s already elevated. It just needs to be presented in a manner where people can understand and appreciate that.” She adds, “I happen to be able to speak in English fairly well, and so I’ve been a conduit for the food. And I hope other people will come along and be conduits as well.”