A 10-second scroll through Lý Xuân Lợi's Instagram account, one can immediately tell how much he loves the streets, movements and lights. 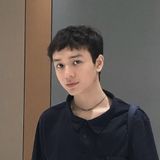 Lý Xuân Lợi, also known as Loi the Boi is a dancer, photographer and designer. His first exposure to these creative outlets began early on when he would copy whatever his elder brother did. “If my brother danced, I wanted to dance. If he drew with a red and blue pencil, I would too”.

Growing up in East London as a first generation Vietnamese, he was able to get involved in many experiences for creatives. “I grew up in a time when local community centres and arts venues were able to offer free activities to poorer areas of London. This opened doors to opportunities”. These opportunities involved being a dance extra in the film Harry Potter the Goblet of Fire to being part of organising a local dance festival in East London, and taking part in a European dance exchange that happened in a small town called Kassel, Germany.

After graduating from the London College of Communication in Graphic Design, he went on to become a designer for Monocle Magazine whilst doing photography on the side. He then left London and now resides in Vietnam where he’s discovering more of himself, his passions and his homeland. A 10-second scroll through his Instagram, one can immediately tell how much Lợi loves the streets, movements and lights. The unconventional ways he captures life with his lens speaks so much of his love for rhythm - and moving with it.

1. If you were to collaborate with any artist in the world, who would it be? Why?

Music producer and DJ, Thao aka Mess! She’s fire and I love how she is just following her instincts on whatever she puts out. She’s also put together immersive shows with dance, music and light. I sometimes practice (dance) to her music and wondered if perhaps one day we could work together on a dance show or film.

2. If you could take a picture of anyone, who would be your permanent muse?

My lifelong dance partner and friend Alex Aina. Shout out to the best muse. We’ve spent a lot of years training and travelling together.

It’s not bad career advice per se, but my mom would always tell me, ‘why don’t you work in a nail shop like your brother, you’ll make good money’. That will be my back up plan if things don’t work out. On the other hand, there’s fun messages to be found whilst driving around Sài Gòn, sometimes in the form of advice.

4. When was the last time a piece of art gave you goosebumps?

Not exactly a piece of art but there’s been a few underground music nights that have felt therapeutic and refreshing to me. People uniting for music and a genuine interest in letting loose on the dance floor is always a pleasure to be part of.

5. Which street do you like best in all the cities you’ve ever lived in?

Anywhere that has a park nearby that I could cycle through and observe nature and people doing their thing.

6. If you could keep only 1 of the 5 senses, which one would you keep?

My answer to this question is a question, have you ever smelt your own nose?

7. Have you ever googled your own name?

I just googled my own name to see if the following image of me still exists: a 16 year old me wearing a waistcoat and red button shirt with j-pop hair style whilst smoking a cigarette and attempting the mean-look. I was living out my fantasy of a high school anime delinquent mixed in with a peaky blinders fit. I'd be surprised if someone can find said image.