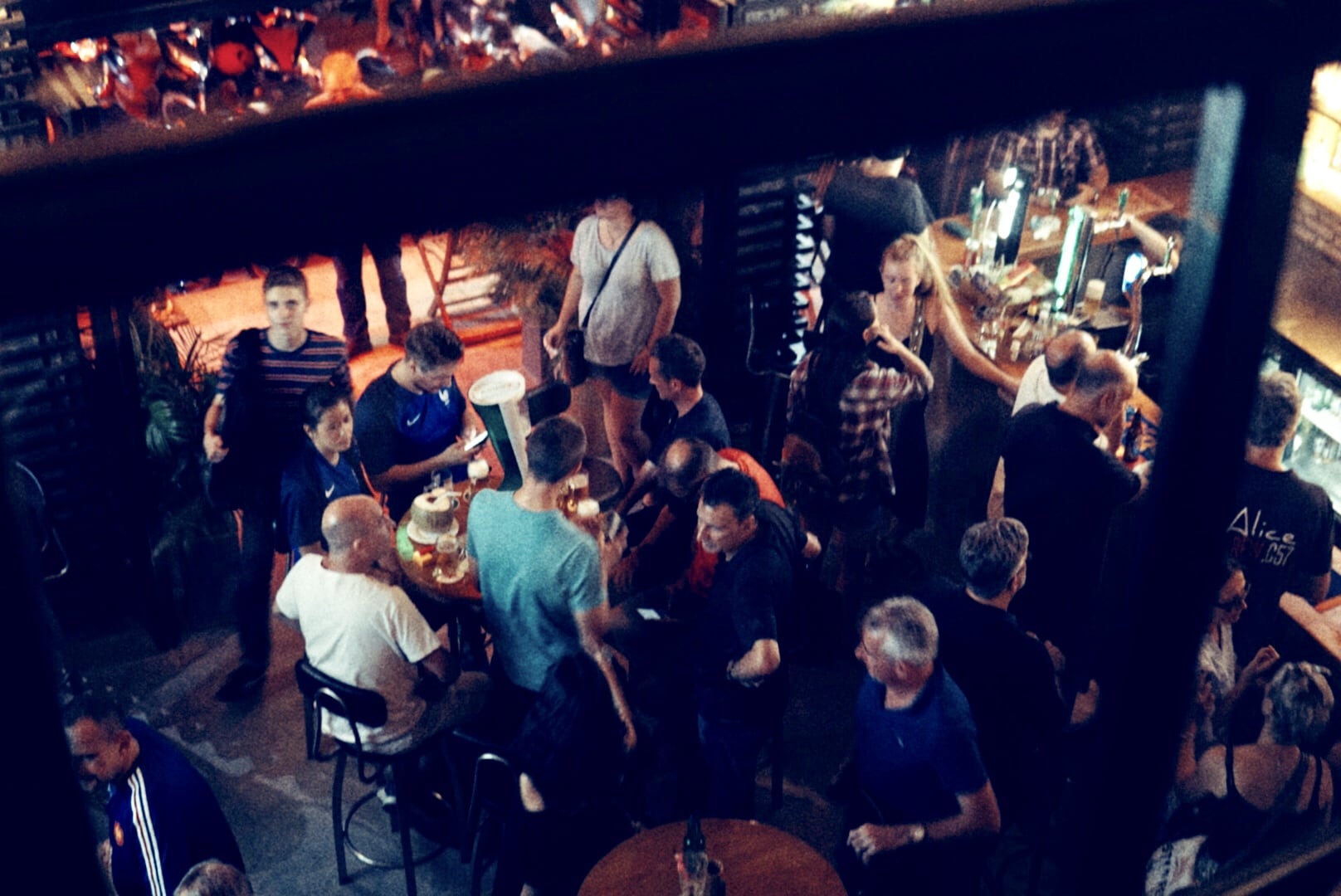 Vietnam’s athletes are gaining prominence on the world stage. In 2016, the country earned its first-ever gold medal at the Olympics. And triathlete Lam Tuc Ngan is on her way to the World Championships at the age of 23.

At the same time, the audience for watching live sports in Vietnam is growing. In 2013, the English club Arsenal played a training match in Vietnam, and fans lined up overnight to meet the team at the airport. And when Vietnam’s U23 football team played in the final game of the Asia U23 championship against Uzbekistan, the game was one of the most watched TV programs in recent years.

To capture this market, there has been an influx of new sports bars in Saigon. Though discussions about the city’s drinking culture usually center on rooftop bars or beer served on sidewalk stools, the reality is more diverse. Here are five of the best places to enjoy both a drink and the big game.

On the edge of District 7, Lost Boys used to be a ca phe san vuon—a traditional garden cafe. It’s the brainchild of the people that brought Ho Chi Minh City some of its most beloved bars like Broma and Below Whisky Den, Snuffbox, the Common Room Project, and the Lighthouse. But it is completely renovated to make the space welcoming and more sports-themed. At the old restaurant, the back room was an eccentric aviary—now, it’s the pool room. Elsewhere, visitors can choose to sit at the bar, in the open air by a koi pond, or at comfortable booths that overlook the verdant sitting area.

The owners want the space to be ideal for everyone—a step away from the “man cave” ambiance traditional sports bars are associated with. So at Lost Boys, customers are offered refined cocktails using inventive ingredients like gummy bears and flower petals. There’s the separate game room—the former aviary—for pool and darts, and there’s even a space for children. These features work to make the bar more inclusive than most sports bars in Saigon. There’s also a menu that’s centered around pizza, cooked fresh in a custom-built wood-fired oven.

In Peter Pan, the Lost Boys are those who live in Neverland and never grow up. “We chose the name because maybe the people who go to sports bars are refusing to grow up too,” co-owner Austin Dinh laughs. “It’s tucked away in the middle of nowhere. It should feel daring and cool,” Austin adds. “It’s a hideout.”

But the co-owner makes clear he’s not judging other sports bars. He simply wants to “modernize” the concept for a different kind of audience, one that doesn’t have to be “shy to bring their girlfriend here.”

“The idea is to take away the testosterone and the patriotism,” he laughs. Lots of sports bars have an identity built around loyalty to a specific country or team, he concludes. It’s something he wants to avoid. “Lost Boys is all about people coming together,” he smiles.

The Orient Pub recently moved to District 2 from a longstanding spot on Ngo Van Nam in District 1. Their new location, which took two months to renovate, provides the pub with an open front, high ceilings, and an exposed brick facade. There’s even a retractable roof and an oversized roof fan, ensuring the environment is airy. Its location is in Thao Dien, so the clientele is mostly expats, but the bar makes a point to show a wide range of sporting events. The Orient can pack in hundreds of guests with a screen so big passersby can see the score from the street.

Owner Grant Holliday, originally from Australia, has lived in Saigon for eight years. He owned Universal Pub in the backpacker area, but sold it before opening the Orient’s new location. He doesn’t market this location as a sports bar because he wants it to be more welcoming and event-focused—“I don’t have sports on for the sake of putting something on,” he elaborates.

The bar serves seven craft beers and cocktails that “aren’t too fancy,” according to Holliday. Upstairs, on the air-conditioned second level, there’s another bar and several more TVs. And there’s even a motorbike that Holliday purchased to put on the wall at Universal, but that made its way to the new Orient. Added to all that is a crowd that is boisterous and multicultural. At each goal, you can hear people shouting in English, French, German, and Vietnamese.

Back towards the center of town is Game On. After five years on Ho Tung Mau, Game On moved a few blocks to a new location on Nguyen Cong Tru in District 1. One of the best parts of the pub, according to manager Nick Tong, is the “sound of the loud English commentary.” But there’s also a large Vietnamese crowd for NBA games in the mornings. Three large projection screens and 12 flat screens take care of that. If you need a break, pop out to the balcony for a view of Bitexco Tower.

The pub will soon begin offering bistro meals for breakfast and lunch—with an international menu. The plan is to diverge from traditional “pub grub” that is popular at other sports bars in Saigon. Part of this new initiative is a focus on being eco-friendly. And so Game On already uses grass straws, it doesn’t sell plastic bottles, and the team are researching options for an environmentally-conscious food delivery service.

All that is not to say Game On are changing everything about the traditional sports bar concept. It’s one of the only pubs on our list to feature rugby, cricket, tennis, golf, hockey, motorsports, and more—they’ll show anything anyone wants to see. Through this, manager Nick Tong hopes Game On can help audiences to “meet new people and make new friends. That’s what sport is all about—making friendships and bringing everyone together.”

In Short: A bar in the center of Saigon with a balcony, two floors, and a new bistro menu.
Location: 81 Nguyen Cong Tru, Ben Nghe, District 1
Contact: Website | Facebook

Brotzeit isn’t just a sports bar. It also doubles as a German restaurant that prides itself on serving authentic German cuisine and purity-tested beer. There are few countries in the world that are as invested in sports—especially football—as Germany, which means that Brotzeit is an easy pick for our list of sports bars in Saigon.

Brotzeit began as a franchise in Singapore before launching their Saigon location. Since then, it has positioned itself as a place to watch football while enjoying food and drink made the German way. At Brotzeit, you can order a wide range of sausages from bratwurst to weisswurst, and there’s even an even wider selection of German beers. The restaurant’s new slogan is “where football fans get together.” And, appropriately, the location is in the centrally-located, newly-renovated mPlaza Saigon—right next to the Intercontinental Hotel—which boasts a modern, comfortable interior.

Restaurant manager Kate Tran says that football is an ideal way to build connections among Brotzeit’s customers. “When it comes to football, there seem to be no borders between nationalities or languages,” Kate Tran says. “We believe the sports community in HCMC will grow as more foreigners enter the country and as the young Vietnamese population becomes more engaged with international sporting events,” she adds.

The German national football team is a perennial favorite in the World Cup, and German club teams such as Bayern Munich regularly perform well in competitions like the Champions League. If you favor the teams of Deutschland, or want to see sports in a central location, then watch them at Brotzeit—ideally with a pile of wursts and a pint of pilsner in front of you.

With two locations, one in District 3, and one on the beach in Nha Trang, Guru Sports Bar is known for hosting a rowdy fanatical crowd. The emphasis is on football, but the bar also shows other big events like major boxing matches and American football’s finale, the Super Bowl. The commentary on the TVs is mostly in Vietnamese and the crowd is primarily local. After the game is over, DJs are often invited to hit the decks to keep the party moving.

The location is big—it can host 200 guests at a time with 16 TVs. It also has sports memorabilia on the walls (including game-worn jerseys by American football’s Peyton Manning and Colin Kaepernick). Guru hopes that by showing crowd-pleasing games with a big audience, it can bring people together. As Vo Nguyen Khanh Chi, Guru’s content marketing executive, says: “It’s really boring when you watch a big game alone and no one can cheer with you. But if you watch it at a sports bar like Guru, there’s so many sports lovers here. We can all watch and cheer together.”

Hieu Luong, the Saigon Guru Sports Bar’s manager, says it’s rare that people come alone—it’s part of Vietnamese culture to watch sports together in big groups. This is especially true around the time of big competitions. Guru shows games from the World Cup and most major European leagues.

Guru Sports Bar is capturing an increased interest among young Vietnamese in international sports. And they serve a variety of beer, both Vietnamese and international, and maintain a strong emphasis on craft beer with local brews from Rooster Beers, Platinum, Pasteur Street, Heart of Darkness, and more including some classic cocktails. They also have a wide selection of food including a VND 550,000 rib eye steak, prepared tableside with a hot iron.

In Short: Of all the sports bars in Saigon, Guru is the favorite of many locals with one of the best selections of beers, classic cocktails, and bar bites.
Location: 10 Ky Dong, Ward 9, District 3
Contact: Website | Facebook