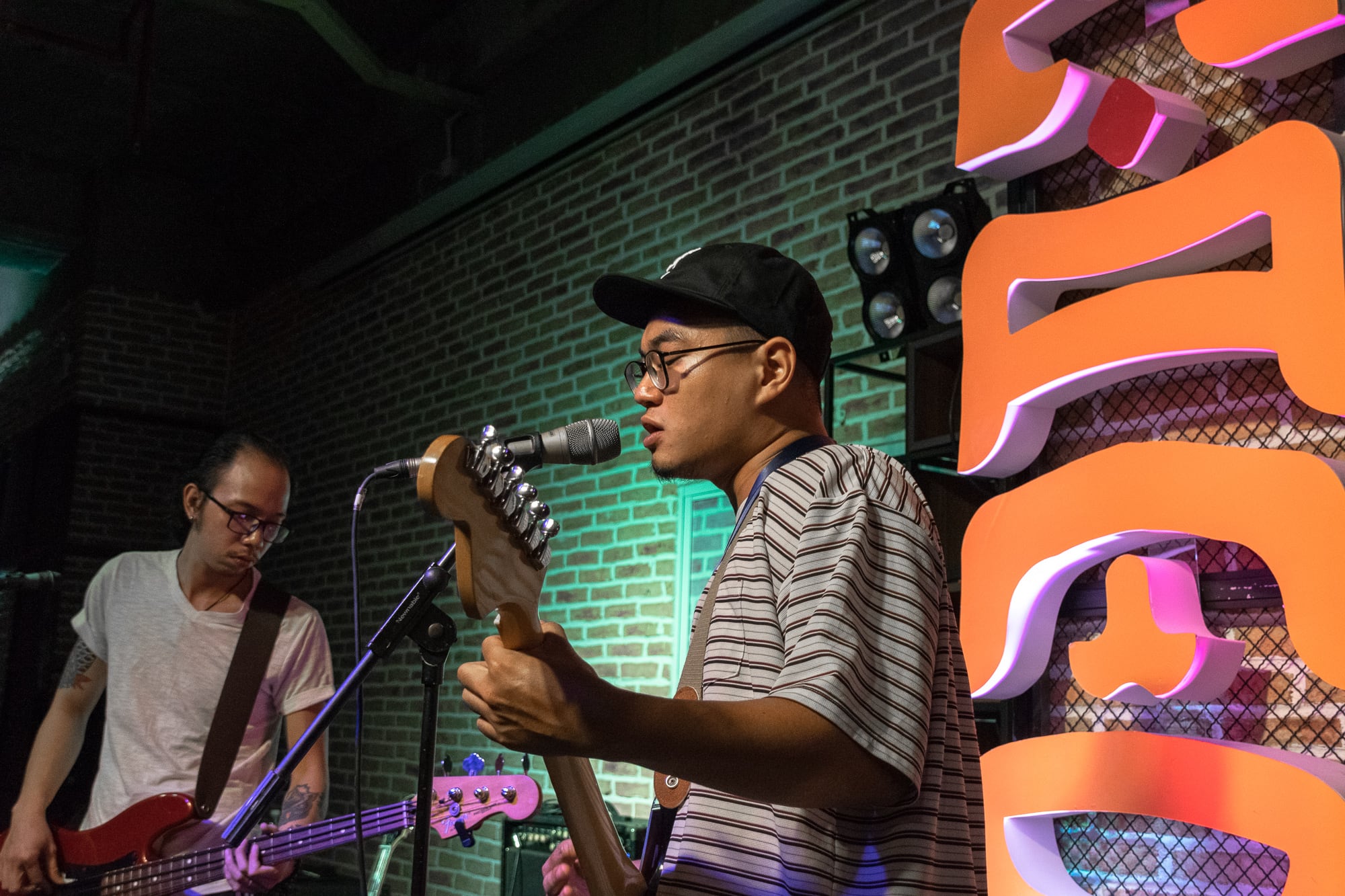 Worldwide, hardcore punk is known for its impressive volume, brief songs, and irreverent standpoint. The lyrics are shouted or screamed, and the production is do-it-yourself. Here, the Vietnamese hardcore music scene been small and devoted for some time. But now, Vietnamese hardcore is expanding to include more than music. Its founding members are building connections with other forms of art that share hardcore’s attitude, even if the method of expression differs. The goal is a far-reaching community and a unification of underground art in Vietnam.

No longer just a scene

“We wanted to create a culture,” explains Vinh Tran, elder statesman of Vietnamese hardcore. He is preparing for the Hoa No Festival, the latest in a series of hardcore events that Vinh has helped organize. The theme of this iteration is “no,” which means “rage” in Vietnamese.

At previous festivals, only hardcore musicians performed. But this year, the organizers expanded the concept. The first evening showcased nineteen works by visual artists, many of whom are young and self-taught, at the Factory Contemporary Art Space in District 2.

And then there was a night of music in Binh Thanh District with a diverse mix of eight bands—four hardcore and four alternative. They included the experimental indie bands Gac Mai and Cam and the Next Door Stories, the local hardcore band Knife Sticking Head, and the American harcore punk band Turnstile.

Vinh feels that there are fewer differences between types of music and kinds of visual art than people assume. Even if these forms do not seem obviously similar to hardcore music, Vinh insists that the major distinction is between mainstream and underground, and not divisions between genres.

“Underground art has the ability to stay relevant over a long period of time,” he explains. “We have to let people collaborate. I hope that we’re uniting the whole underground Vietnamese youth culture.”

Caption: Ton Le says, “There’s no need for borders. To me, as long as you’re doing your stuff convincingly, people will dig it.”

Ton Le, who goes by the stage name Cam, is a singer and rapper who embodies this inclusive sentiment. He is a member of Hazard Clique, an old-school rap trio, and recently formed the indie band Cam & Next Door Stories. He became interested in music after seeing My Chemical Romance on MTV, and when he started rapping he often performed with a guitar.

“Any way I can get my stories out there, I do it,” he explains. “I don’t care that much for the definition of genres. There’s no need for borders. To me, as long as you’re doing your stuff convincingly, people will dig it.”

It is unclear whether the unification of underground art in hardcore’s name will last—or whether the differences between art forms and their fans are too high to surmount.

“I’m as blind as anyone,” Vinh says. “But I see good people gathering together and having fun. Since we’re not selling any kidneys to pay for that shit, I think it’s good.”

Still, the bedrock of this expansion is hardcore music itself. Huy Huynh is the vocalist of Saigon-based band District 105, which played at Hoa No.

“The music is a declaration that I will fight back and struggle for what I believe, says Huy Huynh.

In the US, hardcore originated as a louder, more abrasive form of punk. In the 1970s and 1980s, it was defined by bands such as Black Flag, the Circle Jerks, and the Cro-Mags. Artists were rarely signed to major labels and subsisted on the cash flow from underground shows.

Vietnamese hardcore music takes inspiration from other countries. But its sound is unique despite its recent advent, Huy Huynh explains, because in Vietnam it emerged from metal—not from punk, as in the United States.

Vietnamese hardcore has been similarly scrappy since its inception around 2013. “It has the true DIY spirit,” explains Khanh Tuan Tran, District 105’s guitarist. Bands design their own cover art, film their own music videos, and book their own shows, he explains. They release their music with the help of niche labels.

One of those labels is First and Last Records, based in Hanoi. Kore, the owner, has been involved in hardcore music for over twenty-five years—first in Japan and then in Vietnam. “People are more passionate than before,” he reflects.

In the beginning, organizers brought well-known hardcore artists—like The Ghost Inside and Obey the Brave—to Vietnam. But these shows were expensive to organize and sometimes only a handful of fans attended.

Now, more people are aware of hardcore music and the scene is growing organically. “I’ve seen many people who had bad perceptions of hardcore music get hooked,” Huy Huynh explains. “Now they are part of our big family.”

Among some members of the core fanbase, there was disagreement about the necessity for expanding the culture beyond hardcore music. “People said this will cost us the purity of Vietnamese hardcore,” says Aki, bassist and vocalist of the pop-punk band 7Uppercuts. “But now we’re reaching more people.”

Despite the growth of the principal hardcore music scene, Vinh is still committed to creating a culture that includes other forms of underground art. But why is he so insistent on forging ahead?

Some reasons are practical. Vinh wagers that despite the relative success of Vietnamese hardcore music, the scene is too small to sustain itself if there is a generational change. Vinh is 28, while some members of prominent bands Knife Sticking Head and District 105 are in their 30s. They worry that when they are no longer able to participate, hardcore culture in Vietnam will fall apart.

But these practical considerations are not the main reason Vinh is insistent on expanding.

Each artist at the visual arts segment of Hoa No interpreted the theme of rage differently. The pieces included works of fashion design, digital art, video, papier-mâché, and even holograms.

“When everybody just takes care of themselves and don’t care about others, things go downhill pretty quickly,” Vinh says.

“It leads to depression. Self-harm. Addiction. Drugs. Consumerism. Having a passion and a community is very important. Here, you can turn your negative feelings into positive energy. Hardcore is honest—we’re saying what we really believe.”

Huy Huynh of District 105 also believes his art serves a larger purpose. The Vietnamese hardcore community helped him persevere through depression. Art is an expression of discontent—with life, with society—that he says he could not have survived without.

At the exhibition, Rosa Doan, a student and digital artist, explained her work. It showed an eyeless demon-like figure surrounded by massive hands.

“In society, no one cares,” she explains as she stands near her piece. “People pretend negativity and depression don’t exist. This exhibition is encouragement—to show people they’re not alone.”

The music segment of the festival stretched over four hours. Several hundred attendees—mostly in their teens or early twenties—packed the venue.

There were large screens on either side of the stage displaying psychedelic animations. Fans waved phone lights during Cam & The Next Door Stories’ set. As the night progressed, the crowd thinned and the center of the venue became a wild mosh pit as District 105 played.

The night concluded with Turnstile, who asked the crowd to join the band onstage while they played their last song. Rowdy fans jumped at the opportunity.

Vinh feels he could potentially express his emotions in other forms like visual artist, he admits. In fact, when he became involved in music, he was strictly a death metal fan. But then he got an offer to play in the metalcore band Multiplex.

“I hated metalcore, but I sang in a metalcore band. It was just fate. It grew on me—and what grew on me was not the music, but the people.”

He hopes younger people can find a home in the culture, no matter their specific artistic inclination. That’s why he wants to forge an original Vietnamese underground identity, based on the emotions of Vietnamese hardcore but via mediums not limited to music.

Depression and anger and fear and rage are not auxiliary to this culture. They are central. Vinh lost one of his best friends to suicide last year and he, no matter what happens to the music or the art, says he must try to prevent this from happening to others. He suffers from depression and he sees others experiencing the same. But he has also seen music and art save people, or at least provide refuge.

“All my work is just my attempt to avoid losing more good people,” he concludes.

Vinh is sitting down for a drink after the successful opening of the visual art exhibition as he explains this. He doesn’t usually drink except on special occasions, but he was happy with the turnout—and he just quit his day job.

How is he going to pay for the festival, now that his income has dried up? “I’m going to sell my kidney now.”