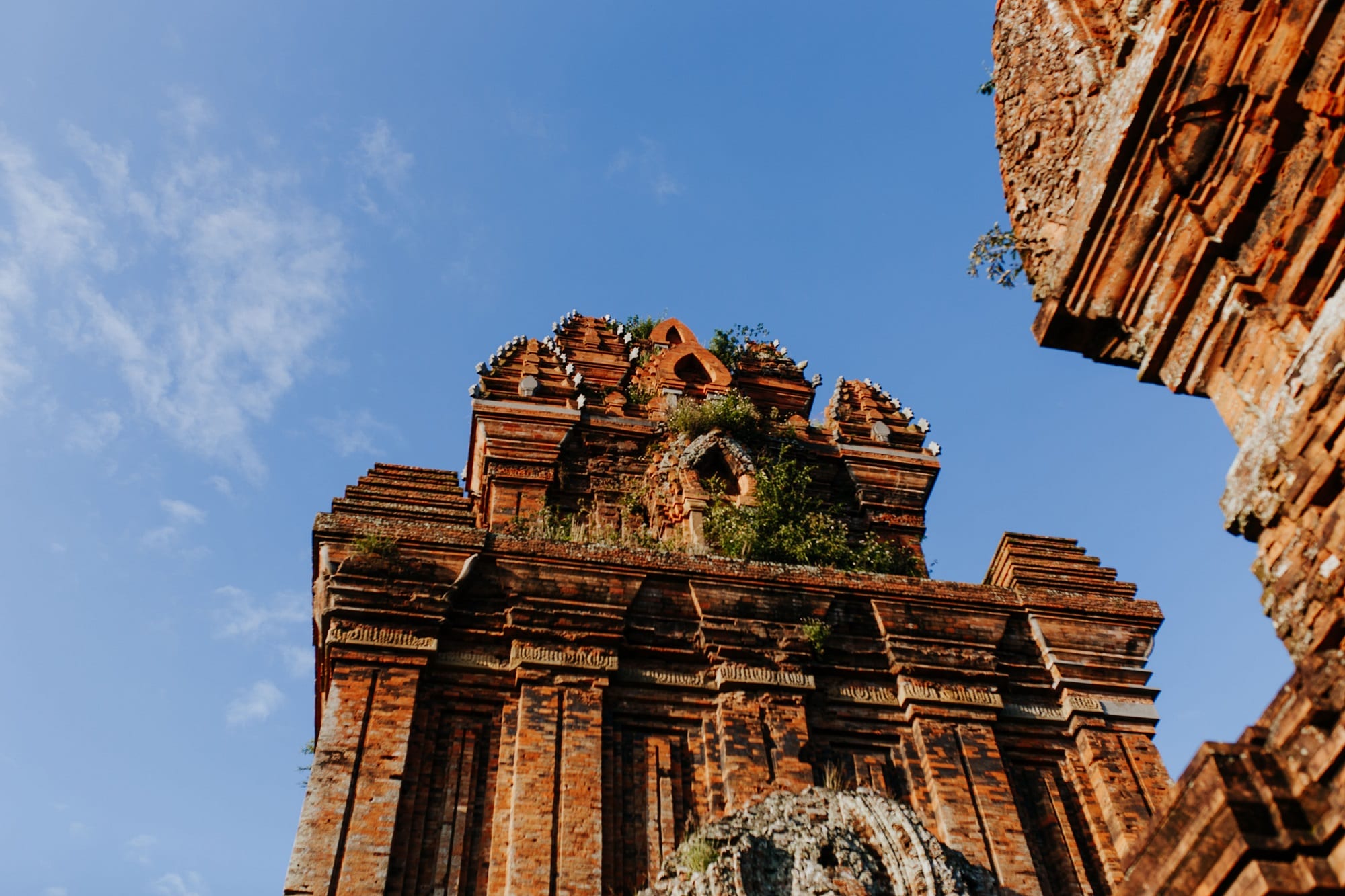 The Cham Towers Of Quy Nhon

Besides its sandy white beaches, beautiful turquoise water and picturesque cliffs, Quy Nhon is also home to a number of towers and temples dating back to the ancient kingdom of Champa, known collectively as the Cham Towers of Quy Nhon. Scattered across the outskirts of Quy Nhon on hilltops and valleys, these are some of the best preserved and most accessible 11th century Cham ruins in Vietnam.

A brief history of Champa

Between roughly 1000-1500, the territory of Champa lay along the coast of present-day southern Vietnam. The Cham people were an indigenous people who ruled this region and Vijaya (just north of present-day Quy Nhon) served as the Cham capital until its defeat in 1471. At their peak, the Cham people were skilled seafarers and controlled maritime trade routes between China, India and Indonesia trading silk and spices.

Today, the Cham people are spread throughout Southeast Asia in Vietnam, Cambodia, Thailand and Malaysia. Binh Dinh Province is home to the biggest and best preserved Cham towers in the region, and it still has 14 of the original towers built between the 11th and 15th century. Typically, Cham towers are characterised by the use of reddish bricks and common architectural features include spear shaped arches over windows and doorways with carved patterns and designs.

There has been much repair work conducted in recent years to ensure that the towers continue to survive for future generations. Here are a few notable Cham sites that we recommend you add to your itinerary.

Only two kilometers from the city center, the Thap Doi Towers (or ‘Twin Towers’) are the most accessible of all the Cham sites. Built in the late 12th – early 13th century, these red brick towers sit humbly in a small city park, surrounded by coconut palms, banana trees and other tropical plants. The pair of towers stand side by side, one at 20 metres tall and the other around 18 metres.

Steep steps lead up to the shrines inside where the ceiling is exposed and opens to the sky. From the outside, the corners of each roof appear to be held up by the torsos of garudas (a bird-like creature from Hindu mythology). The architectural style shares some similar characteristics with Angkor sites and reflects exchanges between Champa and the Khmer Kingdom.

Unsurprisingly, this has become a popular Instagram spot for locals. Being so conveniently located, these are by far the busiest of all the Cham sites so it is best to plan your visit for early morning if possible. Park yourself on a bench in front of the towers and take some time to admire these beautiful structures.

Thap Banh It / Banh It Towers

Banh It Towers is a group of four beautifully restored Cham towers perched atop a hill with a panoramic view of the surrounding countryside. Situated about 15 kilometers from Quy Nhon city center just off Highway 1A, these towers will no doubt leave a grand impression on anyone. As one of the more popular Cham sites for tourists, you’ll find a series of signs which provide some information on the architecture of each tower.

Built towards the end of the 11th century as the Cham people were pushed south by the Vietnamese and Chinese, the architecture of each tower is distinctly different. Beautiful from afar and majestic up close, the towers are representative of the transition from My Son A1 style to Binh Dinh Style. The remaining vestiges are evidence to a large number of other architectural structures which previously existed here.

From the parking lot, a short climb will take you up to the Gate Tower. Situated in the east of the temple complex, it’s built in the same style and structure as the main tower with less decorative patterns. Designed in such a way so that your eyes are instantly drawn up to the main tower as you approach the archway, it makes you truly appreciate not just the design of each tower but the complex itself.

The steps from the Gate Tower will lead you up to the Sanctuary Tower and the Fire Tower. Standing 29.6 meters tall, the Sanctuary Tower is decorated with five double-groove pilasters and richly decorative patterns on its three roof layers. Look closely and you’ll also see leaf and flower motifs on the edges of the its roof. Today, this tower continues to be a place of worship for buddhists and you’ll often see groups gathered here for religious activities.

The Vijaya Citadel (also known Do Ban, Cha Ban and Hoang De) is one of the most important of all the Cham sites. Vijaya was once a prosperous city and this site constituted the capital of the Cham Kingdom from the 11th century until 1471. It was the site of some major battles, sieges and sackings, and subsequently the political center of kingdoms which followed.

Sadly, little remains of Vijaya. Open excavations have revealed a few relics like remaining walls, stone lions and square wells. Most of what is visible today are remains from Tay Son Dynasty, when General Nguyen Nhac commanded the building of ‘Hoang De Citadel’ on the same foundations. Soon after, the citadel was taken over by the Nguyen Dynasty and eventually destroyed to rebuild further south.

While there isn’t a whole lot to see considering the rich history of the site, the historical significance makes it a worthwhile stop. The site lies on a hill surrounded by lowlands and not far in the distance, you’ll be able to see Canh Tien Tower.

The surrounding village is also worth exploring. Look for the two stone elephants which have survived from the Cham Kingdom.

Only a few minutes from Vijaya Citadel stands Canh Tien Tower. Accessed via a small road off Highway 1A, the tower is located in the middle of what used to be Vijaya Citadel. Unlike Thap Doi Towers, it receives much fewer visitors and you can easily enjoy the grounds to yourself.

The name ‘Canh Tien’ means ‘fairy’s wings’ as the tower resembles a fairy ascending to the sky when seen from a distance. If you look closely, you’ll also notice many decorative wings on each corner pillar.

The grounds of the tower are very peaceful, making it a great place to relax and explore the temple at your own pace. In the distance, you’ll be able to see another tower perched on a hilltop, evidence to how cleverly the Cham people positioned these incredible structures.

There is a small ticket office at the gate, however this is often unattended due to the low number of visitors. Canh Tien Tower is an easy stop if you’re on your way to or from the airport.