Charcuterie Boards: A Guide To The Vietnamese Meat Platter | Vietcetera

Charcuterie Boards: A Guide To The Vietnamese Meat Platter

Charcuterie Boards: A Guide To The Vietnamese Meat Platter 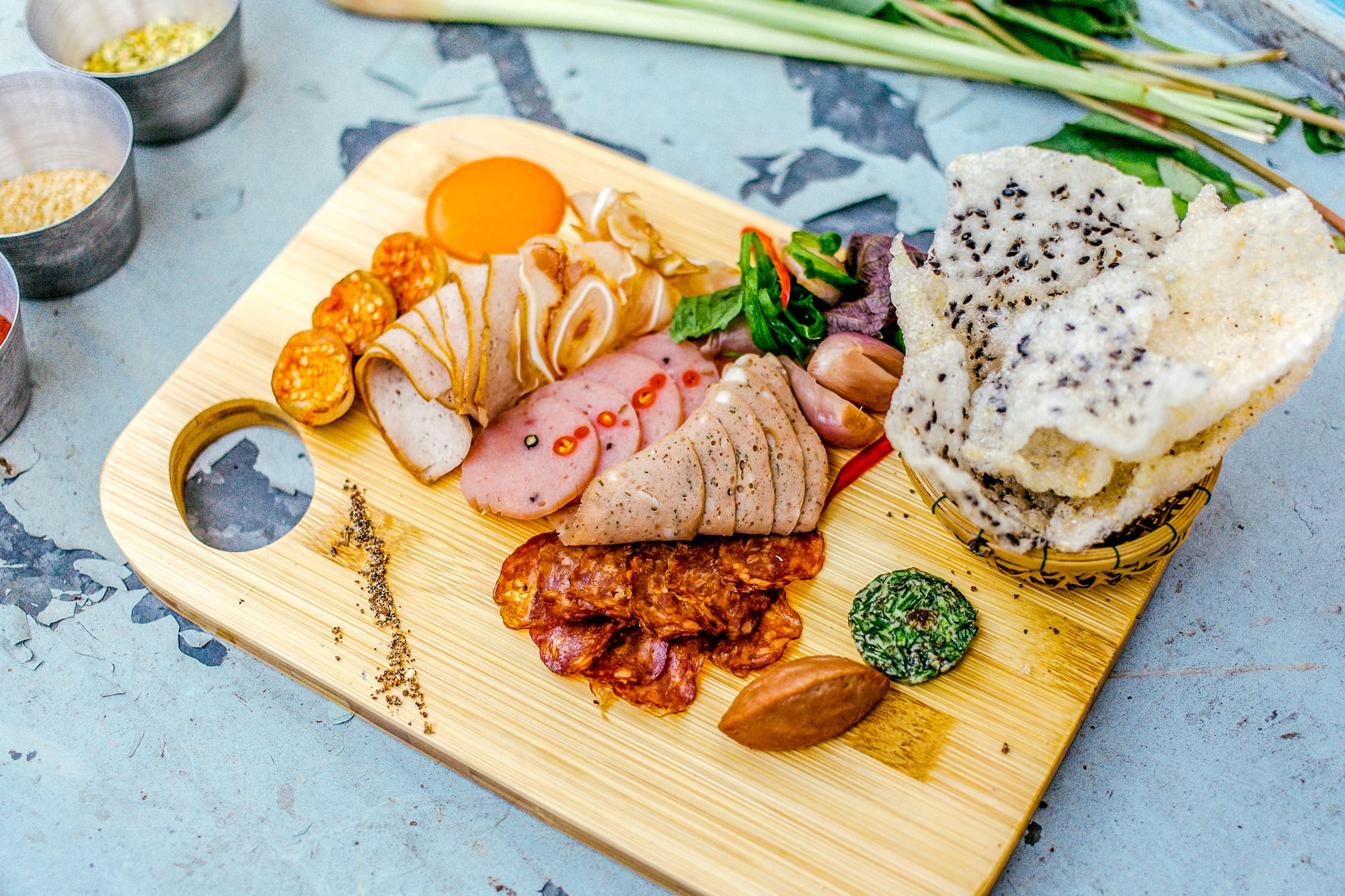 Put simply it’s meat made to last that’s enlivened with smoke, spices or seasonings, and even funky, very fashionable, fermented flavors. And it’s food dearly loved in all its regional variations by people around the world.

With Vietnamese food going global, here we explore the impact of Vietnamese cold cuts on the international food scene, then try to put together our own local platter, with some help from award-winning chef Peter Cuong-Franklin.

Still better known for pho, Vietnam’s ever-evolving culinary heritage is broadening its reach internationally. Take bun cha, with its smokey cuts of BBQ pork served over rice noodles. It was the dish Anthony Bourdain picked out for President Obama. And the world got a taste of this beloved Hanoian pork dish.

Now, Vietnamese cold cuts are even popping up in some of the best restaurants in New York. Chef Jamie Bissonnette of NYC’s celebrated Barcelona tapas restaurant, Toro, was inspired to make his own cha lua after a trip to Ho Chi Minh City. One magazine described Bissonnette serving up his version—a “Vietnamese bologna with fish sauce, pork, and palm sugar steamed in a banana leaf”—as a bar snack at his other restaurant in Boston during a packed industry event.

And he included his cha lua recipe in his New Charcuterie Cookbook: Exceptional Cured Meats To Make And Serve At Home which helped him win the James Beard Best Chef Award.

A perfectly composed charcuterie board

With GQ magazine telling the world that “a big charcuterie plate is the best thing to bring to any party,” what are the key components necessary to ensure nobody gets bored of your board?

A well-curated meat board juxtaposes flavors and textures—from chewy, briny, thinly-sliced serrano to spreadables like rich, punchy pates, crunchy pickles, and sweet relishes. The secret to putting together that perfectly balanced charcuterie board lies in its simplicity.

Philippe Duc, sous chef of Michelin-listed Ash & Elm restaurant at the InterContinental Singapore, agrees. Working out of a restaurant entirely dedicated to artisanal meat platters, and learning his profession under the wings of culinary doyens like Alain Ducasse and Jean-Francois Piège helped make him the go-to guy for understanding board-building.

Even 2016’s Michelin Guide reached out to him for a few tips on how to choose the perfect combination of meats for a well-balanced cold cut board.

“I recommend incorporating a mixture of ham, saucisson and smoked meats for variety,” he told the guide. “Parma and Iberico ham would work well as they are widely available at the gourmet grocer’s, they are also tasty and complementary with other cured meats. The Bayonne ham from France is another recommended option for its sweet taste.”

Regarding vegetables he suggested “pickles, olives, gherkins, and capers, as they help cut down the fattiness and richness of the cured meats.” And for cheeses, he opted for three: the hard matured mountain cheese comté, buttery tomme, and milky, fresh Italian burrata.

Putting together your own Vietnamese version

So, what would a perfectly curated cold cut board look like in Ho Chi Minh City? Anan Kitchen + Bar’s award-winning chef, Peter Cuong Franklin, told us to: “Think of the Vietnamese charcuterie board as a disassembled banh mi.”

”Include fatty, roasted pork belly, savory cuts of pork and beef cha lua, as well as a sweet and smoky baked cinnamon pork roll. Pair those with pickled goodies like daikon, carrot, and ginger, and local spreadables like spiced pineapple jam, Laughing Cow and Dalat cheeses, pork pate, and, of course, the quintessential Vietnamese baguette,” he added. “And don’t forget that other obligatory component of a Vietnamese charcuterie board—a selection of fresh herbs including mint, Vietnamese coriander, and basil.”

Where to buy your ingredients for a Vietnamese charcuterie board

Nhu Lan is a family-run grocery store and bakery that has been selling meat, cheese, bread and a wide range of imported goods since 1968. Located in the heart of the city at 66-68 Ham Nghi, District 1, the historic shop is a go-to for the perfect selection of items for your Vietnamese charcuterie board. From Vietnamese cha lua and other cured pork products, local and imported cheeses, as well as jams, and, of course, Vietnamese baguettes, Nhu Lan is the perfect one-stop shop.

But focusing on the meats for a minute, our cha lua experts, Long Phung, suggest six Vietnamese cuts for inclusion:

Cha lua chien: Cha lua’s greasy cousin, this recipe omits the standard banana-leaf wrap because the whole sausage is deep-fried rather than steamed. It’s thick, heavy and sure to satisfy your craving for everything oily.

Cha lua Hue: This spongy Vietnamese ham packs a seriously flavorful punch and is usually served as a snack or added to one of Vietnam’s most cherished dishes—bun bo Hue.

Cha boc trung: Don’t let its simplicity fool you. These pork meatballs are stuffed with quail egg, and could be considered the Vietnamese equivalent of a Scotch egg.