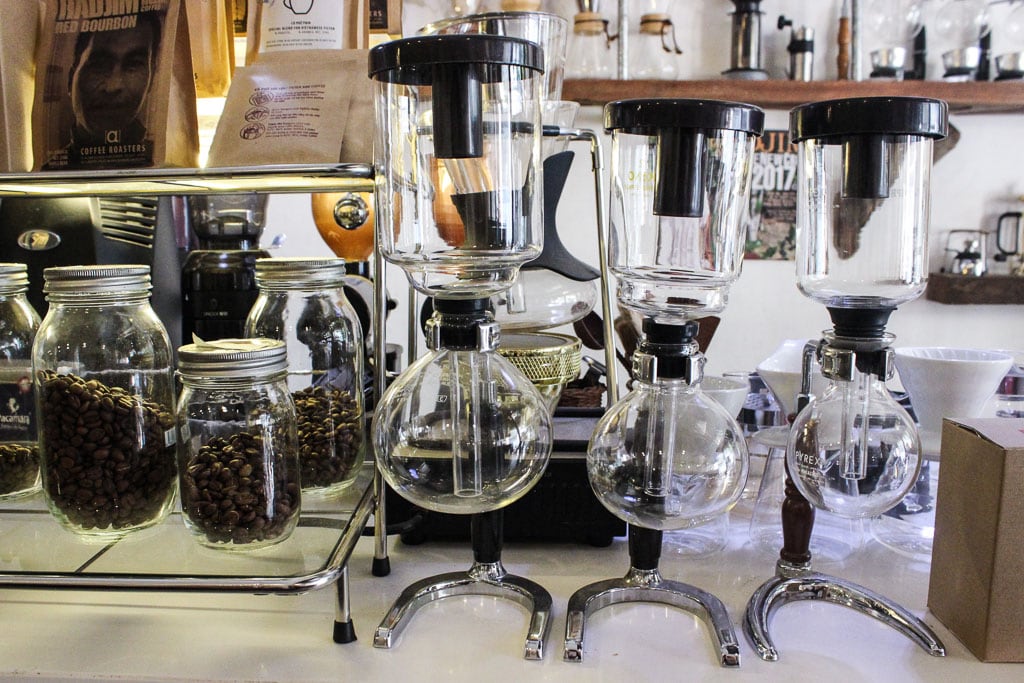 Cold brew coffee has blown up. The fruity, flavorful brew has become a core coffee-shop staple from Saigon to San Francisco (just drop into a branch of Blue Bottle whenever you’re in the American coffee capital or our own chain of Vietcetera cafes in Ho Chi Minh City for proof).

Cold brewing is a different way of preparing coffee because it replaces heat—brewing coffee with hot water means undesirable flavor elements are included—with time. Some of the cold brew coffees from our featured Saigon cafes take as long as 24-hours to prepare. But, it’s worth the wait because by brewing using either cold or room temperature water the result is a smoother, less acidic coffee.

Although cold brewing techniques have been employed in places like the Netherlands, Japan, and the US for hundreds of years, the trend really took off when Starbucks unveiled their own version in 2015. Since then, cold brew coffee has taken the world by storm.

In the past few years, some of our city’s best cafes have added their own classic cold brews, and some creative alternatives, to their menus. From refreshing carbonated versions to zesty lemon-flavored concoctions and plain cold brew served on the rocks, Ho Chi Minh City’s cold brew coffee scene is thriving.

In a country already famous for its cafe culture and its coffee, what better way to explore town (and to cool off while you’re doing it) than by touring Ho Chi Minh City one cup of cold brew at a time?

Start the day with a bite to eat and a cup of cold brew at Bunker Bed & Breakfast Bar—you can even throw a beer into the equation because no one at Bunker is judging. As the name implies, Bunker Bed & Breakfast Bar is a hidden gem in Da Kao that serves as both an Airbnb and a multi-room cafe, restaurant, and bar. The concept was inspired by the immigrant bar and restaurant culture of Los Angeles, where one of Bunker’s founders grew up—right on Bunker Hill.

Open from 8.30 AM, not only does Bunker Bed & Breakfast Bar serve all-day breakfasts and booze—waffles, hamburgers and plenty of beers like local craft brews from East West and Te Te—but they also do quality coffee and cold brew too courtesy of beans from our friends at The Married Beans, Dalat.

But, besides their standard cold brew serving, it’s their peppermint and lemon cold brews that have really put them on the map. “We were craving something refreshing, with a kick of caffeine. Think of a lemonade or a mojito with more than a hint of coffee in it and that’s how we got our flavors,” explains Bunker co-founder Laure Chevallier who’s also the creative spark behind Bakes.

They make their cold brew daily—a process that takes eight hours. “We don’t let it sit for too long so our cold brew is less bitter with fruity flavors and a sweet aftertaste,” Chevallier says.

Bunker Bed & Breakfast Bar prides itself on creating fun, cold brewed drinks that are palatable to everyone. “Our flavored cold brews are very easy to drink. You don’t need to be a coffee connoisseur to like them!”

In Short: “To live and dine in LA” by way of buzzing Da Kao Ward.
What To Order: The peppermint and lemon cold brews when you’re “craving something refreshing with a kick of caffeine.”
Location: 79/2/1 Phan Ke Binh, Da Kao Ward, District 1, Ho Chi Minh City
Contact: Instagram | Facebook | Website

Located 5-minutes away from Bunker is [a] Coffee House. You can walk over once you’re done with your Bunker breakfast. As far as hidden cafes go, this might just be the hippest one in town. The cozy space is lined with glass beakers, old French presses, Japanese siphons, and jars of coffee beans—a testament to Coffee House’s artistic, experimental tendencies. And this tranquil cafe is also a great place to catch up on your emails or to open up that book you’ve been planning to read—the cafe also have a selection of reading materials, mostly in Vietnamese, if you forgot to bring your own.

In fact, [a] Coffee House was one of the first cafes in HCMC to start tinkering with specialty coffee, including cold brew. When Nguyen Truc first opened the cafe in 2013, he was fascinated by the idea of brewing coffee with ice. “I originally bought an ice-drip coffee maker, just out of curiosity,” he recalls.

Truc wasn’t entirely sure what he was doing back then, so he slowly began researching online, brewing small batches of beans and serving cups of his slow-drip coffee to friends to gauge their interest. His new cold brew coffee was such a hit it didn’t take long before it was added to the menu. From there, exploring different methods of cold brewing were a natural progression.

To make [a] Coffee House’s signature cold brew, Truc grinds up a mixture of Arabica and Typica beans and lets them steep in cold water for 24 hours. The result is a fruity full-bodied brew served with ice in a wine glass.

“Cold brew, for me, is quite similar to ice-drip, though it has a different brewing process,” he explains. “I fell in love with the taste and aroma of this cold brew coffee from the very first batch.”

By now it’s probably lunchtime, so head over to Ho Chi Minh City’s Ngo Duc Khe Street that connects Dong Khoi and Nguyen Hue (and note that it’s best to take a taxi over from Da Kao). In addition to coffee, The Workshop also serve up a selection of salads, sandwiches, and burgers perfect for an early afternoon pitstop.

There’s also a function room for rent for up to 20 people in case you bring some friends or colleagues along. And there’s Siqar, that’s a floor down from this airy loft space, in case you arrive much later you would like to while away the evening with a cigar afterward.

Since The Workshop’s founding in 2014, it’s quickly emerged as one of the best coffee shops in town—and that’s because they take their coffee very seriously. “Sometimes, I drink about ten cups a day because I’m always tasting!” the Workshop manager, Tran Do Quynh, says. “You see the barista just came up to me and asked me to taste a cup of tea because the flavors were not quite right.” It’s this attention to detail and a true love of every aspect of the coffee-making process that makes The Workshop’s coffee—and their cold brews—stand out.

On the menu is traditional cold brew, cold brew with a spritz of sparkling water, and a cold brew latte—a spin on the timeless Vietnamese cafe sua da. All these beverages are made with 100% Vietnamese beans which are brewed from anywhere between 16 and 20 hours—meaning every batch is subtly different.

Tran is the first to admit that they are always trying to improve upon their product. It’s this desire to constantly evaluate, learn, and evolve that breeds quality. Despite remaining humble, it’s clear that The Workshop is doing something right when it comes to their cold brew coffees. They are, after all, some of the best-selling beverages in the cafe.

And, according to Tran, customers can expect some new and exciting cold brews in the future.

As the midday heat fades, take a walk to one of the two District 1 outposts of Shin Coffee just a few minutes away. Shin was founded by Nguyen Huu Long in 2015. The coffee connoisseur lived in Japan where he immersed himself in the country’s obsessive coffee scene. After that, he decided to share his knowledge by establishing Shin Coffee in Saigon. It’s a small chain that has quickly gained a reputation as one of the best in town.

Because Shin prides itself on bringing international coffee trends to Vietnam, it was only a matter of time before it turned its attention toward cold brew coffee. “Two years ago we started to serve cold brew [in order] to introduce the diversity of coffee culture all over the world to our customers in Vietnam,” explains store manager Thuy Nguyen Thanh.

Unlike most cold brews in the city, which use beans sourced solely from Vietnam, it’s not surprising that Shin uses a blend of international beans—specifically from Ethiopia and Nicaragua. After steeping the grinds in cold water for eight hours, they serve their smooth subtly sweet cold brew over ice in a wine glass.

At Shin, customers are encouraged to hang out at the bar and watch the baristas showing off their craft. “The equipment, the process, and the flavor of cold brew coffees brings a new coffee experience to our customers,” Thuy Nguyen Thanh says. “More and more people in Vietnam are paying attention to coffee culture—cold brew belongs to this trend. At Shin Coffee, we hope to be the preferred place for customers to drink high-quality coffee made in a variety of ways from around the world.”

A 15-minute walk away from The Workshop, towards Ho Chi Minh City’s intense “Japan Town” enclave, and the last stop on our itinerary, is Vietnam Coffee Republic House. It’s the perfect location as night falls and this area comes alive.

Affectionately known as VCR, this brand’s coffee shop (and its sibling, the VCR Bar and Showroom around the corner on Thai Van Lung) has not only jumped on the cold brew bandwagon but taken it to another level. “In Vietnam, the cold brew trend is on the rise. A lot of shops try it out but they don’t go as far as to mass produce it,” explains Dao Duy Bang Thanh, assistant manager at Vietnam Coffee Republic.

So that’s exactly what VCR did.

In December, VCR unveiled its first bottled long-life cold brews, meaning that customers no longer have to make a trek to the coffee shop to get their fix. Instead, they can just buy a stash of bottled cold brews either in-store or online and enjoy it whenever they want.

What makes VCR’s bottled cold brews unique is that they last a surprisingly long time. A bottle of their Cong Hoa Ca Phe Da stays good for up to six months. The brand has also released Cong Hoa Sua Da—bottled cold brew with condensed milk—which has a shelf life of one month.

Their cold brews are made with 100% Vietnamese beans which, as the names indicate, are inspired by traditional Vietnamese coffee drinks. “We focus more on local beans and serving styles because we want to introduce people to a truly Vietnamese experience,” says Dao.

Just because their cold brews can be purchased online doesn’t mean you shouldn’t stop by their cozy brick-and-mortar cafes. A refreshing cup of their famous cold brew coffee, flavored with nothing more than a sliver of orange zest, is the perfect way to end a tour of Saigon’s cold brew scene.