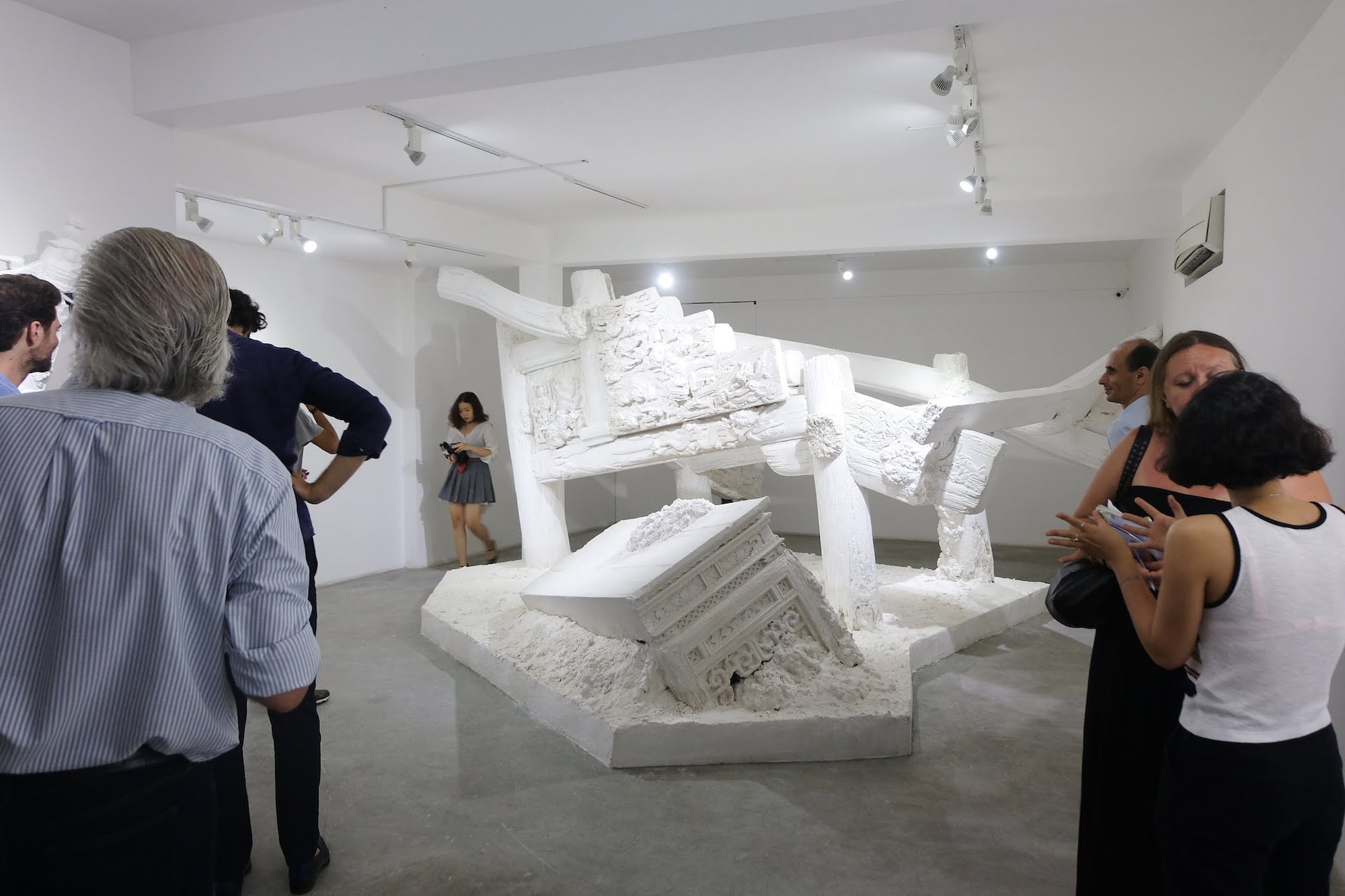 The most extraordinary recent accomplishment to emerge from Vietnam’s creative community is Phan Thao Nguyen’s clinching of the Grand Prize at the prestigious Signature Art Prize 2018. Phan was motivated to pursue art after a film screening by Wonderful District, a collective founded by French artists Sandrine Llouquet and Bertrand Peret.

Despite a lack of prolific Vietnamese artists at the time, this introduction to the art world helped pave the way for Phan’s outstanding award. It’s an achievement that might spur further interest in collecting contemporary art in Vietnam.

In the eyes of Quynh Pham, founder and director of Galerie Quynh, Phan will not be the last artist to be influenced by a local event or exhibition. “Any student studying across the road may become the next Phan Thao Nguyen. They just need to come and visit one our exhibitions after class,” says Quynh confidently.

Traditionally, galleries needed to negotiate the complex and costly world of international art fairs to be profitable. They also needed to access the smaller pool of foreign collectors based in Vietnam. However, there’s a growing number of millennials interested in buying Vietnamese contemporary art.

To learn more about the birth and growth of Vietnam’s contemporary art scene, and to get some advice on collecting contemporary art in Vietnam, Vietcetera talked to three leading art galleries: Galerie Quynh, Chaosdowntown, and Vin Gallery. 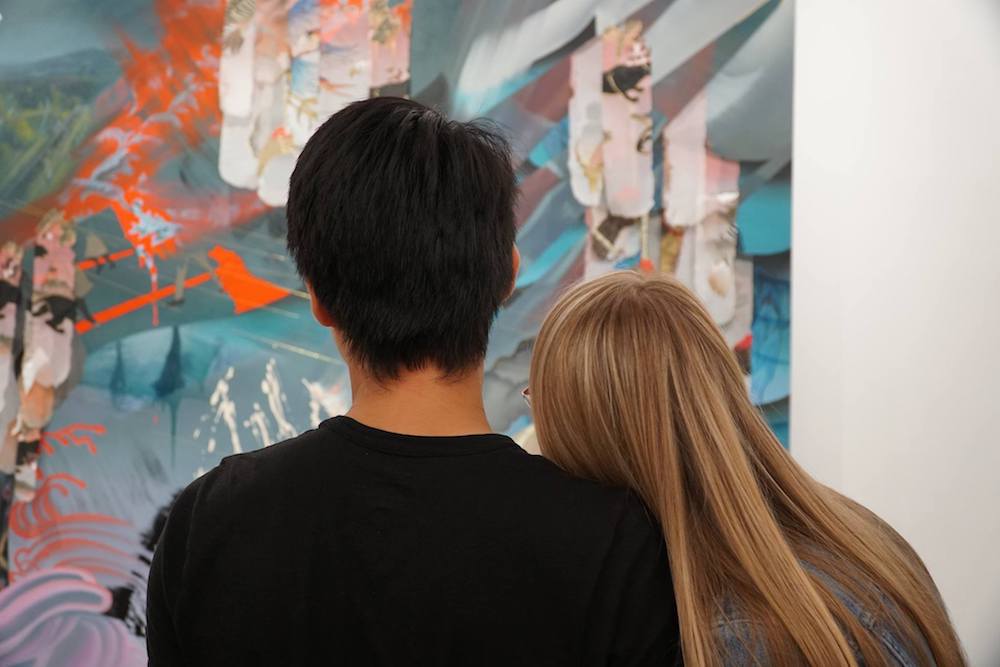 The opening of Galerie Quynh’s show, “Mutiny in the Garden,” by Lien Truong.

Galerie Quynh has been around for fifteen years making it one of the most established contemporary art galleries in Vietnam. It has a long history of encouraging locals to appreciate inventive pieces of contemporary art. “Back in 2003 when we opened, there was little infrastructure in place for the support of local artists. We had to build everything from the ground up,” explains founder and director Quynh Pham.

Although she had had experience working for both the Smithsonian in Washington D.C. and the Museum of Contemporary Art in San Diego, Quynh found it difficult to apply the American model to her native country of Vietnam. The needs of the Vietnamese artistic community were vastly different from those she used to work with.

“The community needed a cultural stimulus. What we were doing was so new that we could not draw off of the experiences of others. We had to create our own model,” Quynh shrugs. 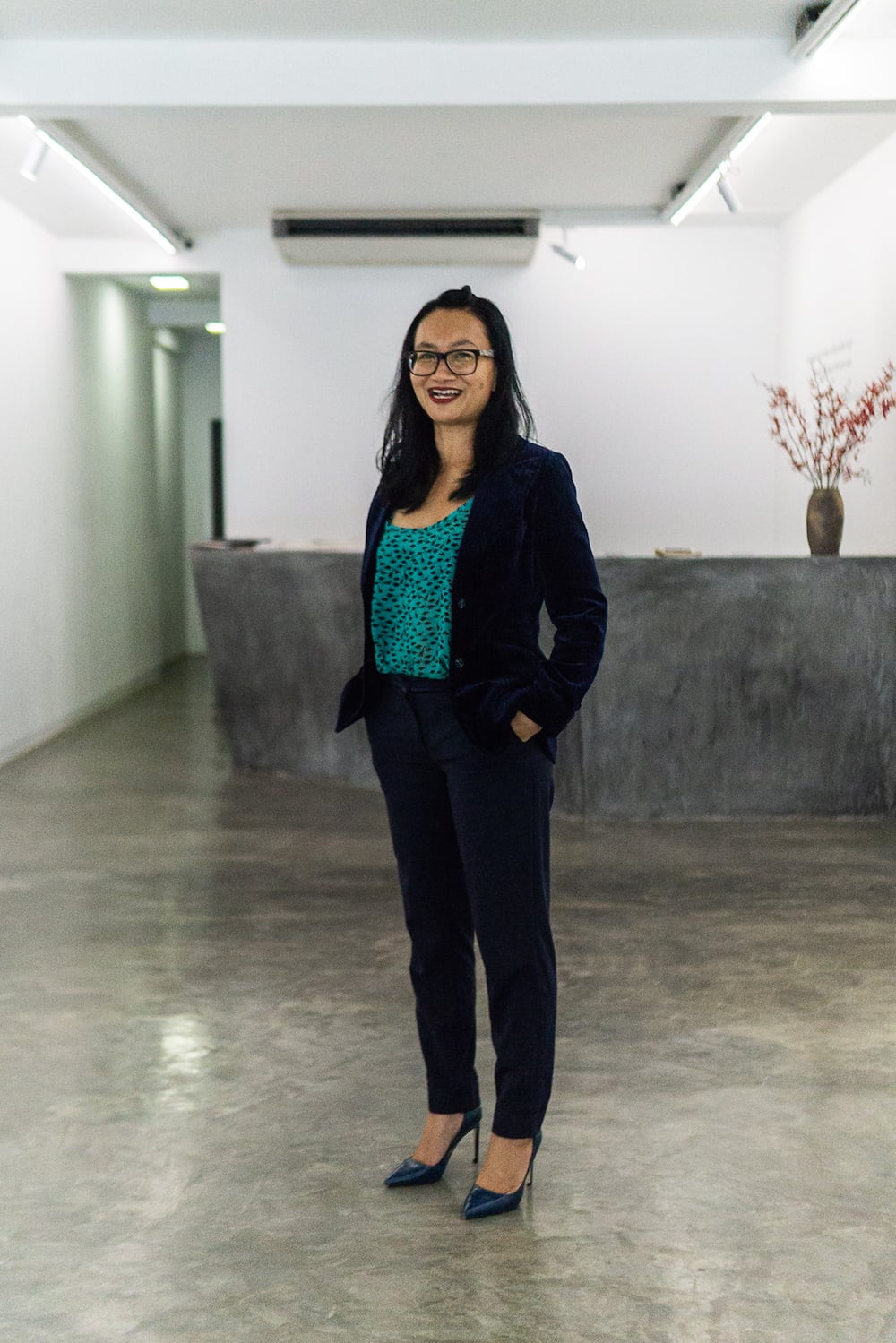 Quynh Pham founded Galerie Quynh 15 years ago: “What we were doing was so new that we could not draw off of the experiences of others. We had to create our own model.”

She recalls the exhibition of which she is most proud—Sue Hajdu’s 2006 project called “Magma: We’re not Counting Sheep.” The street-view installation piece lasted for twelve nights, and featured two different “sleepers” each night. Visitors crowded the sidewalk and street to see the exhibition. Curious passersbys would gather as the two performers—Sue Hajdu and Quynh herself on the opening night—lay on a mattress in the gallery in view of the strangers.

“We attracted people who wouldn’t otherwise look at art. I think we managed to engage the audience by raising questions. WIth that, hopefully viewers started to understand contemporary artworks,” remembers Quynh.

Today, Quynh sees young artists using their work to address social issues like loss, meaning, and justice. This trend is evident in the rise in popularity of emotional, conceptual works, like those of Truong Cong Tung. 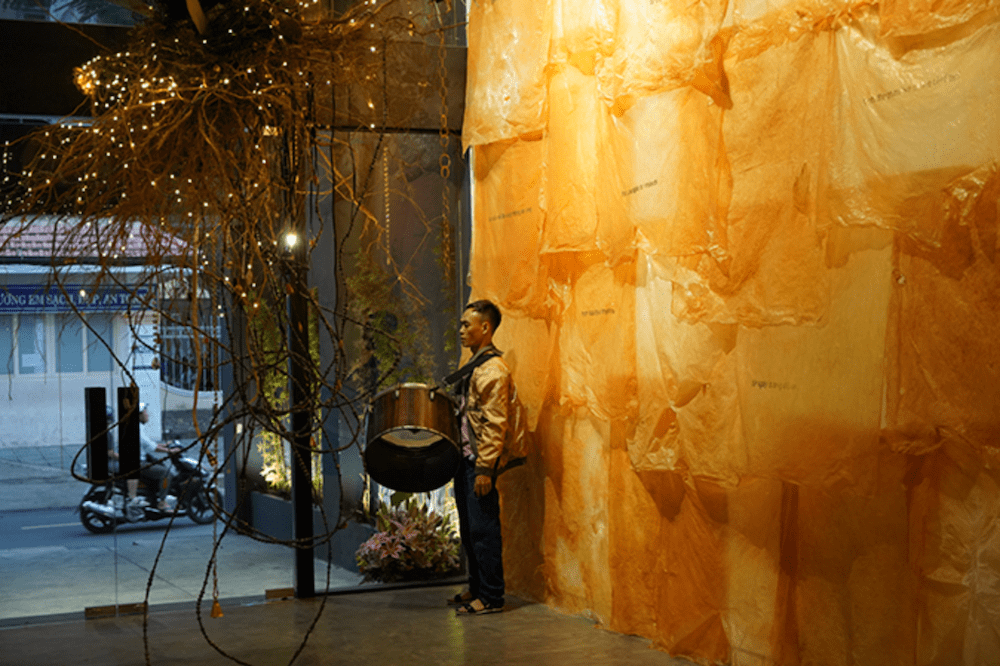 A drummer welcomes guests to Galerie Quynh’s show, “Between Fragmentation and Wholeness,” by Truong Cong Tung.

Tung’s works focus on humans’ treatment of the environment. Earlier this year, Quynh and Tung collaborated in producing a show titled: “Between Fragmentation and Wholeness.” The piece featured natural phenomena altered by humans, like trees twisted around satellite dishes and horse sculptures covered in computer keys.

Quynh believes that conceptual work like Tung’s can be difficult to understand. To increase public access to works like Tung’s, Gallery Quynh integrates educational programs. Artist-led talks and lectures are an integral part of every exhibition. 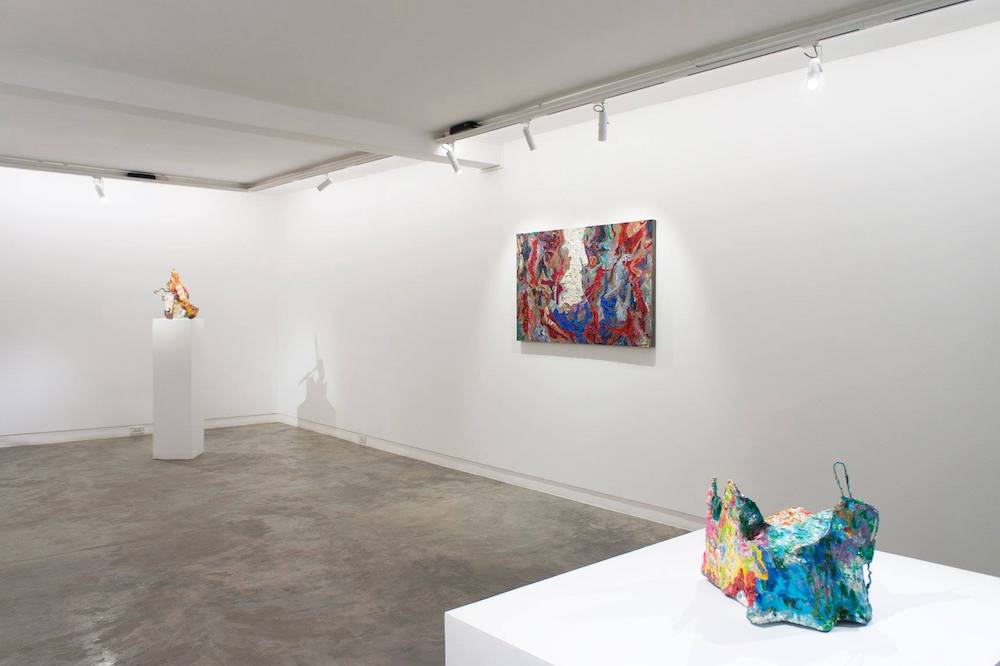 Hoang Duong Cam’s sixth solo show at Galerie Quynh, “with a necessary dose of surrealism to go through the spaces between men,” shows the gallery’s committment to working with artists long-term.

Galerie Quynh has also taken a unique approach to their selection of artists. Rather than looking at artists’ past work, they weigh the artist’s motivations, passions, and values in making their decision. “We don’t want artists who create one or two stunning projects then burn out. We look for a light that will shine on future works, no matter the challenges an artist is faced with. We’re here for the long haul,” says Quynh.

That long-term commitment to developing artists has seen painter Hoang Duong Cam have six solo shows at the gallery—the latest was called “with a necessary dose of surrealism to go through the spaces between men.”

Despite the fact Galerie Quynh have committed to nurturing artists, they constantly receive portfolios from aspiring creatives to show there. Unable to follow up, but aware of the importance of supporting young artists, Galerie Quynh helped launch a non-profit initiative in 2014 called Sao La. As they spearhead organization of new exhibitions and workshops, Sao La provided a space where local artists could experiment and hone their ideas. 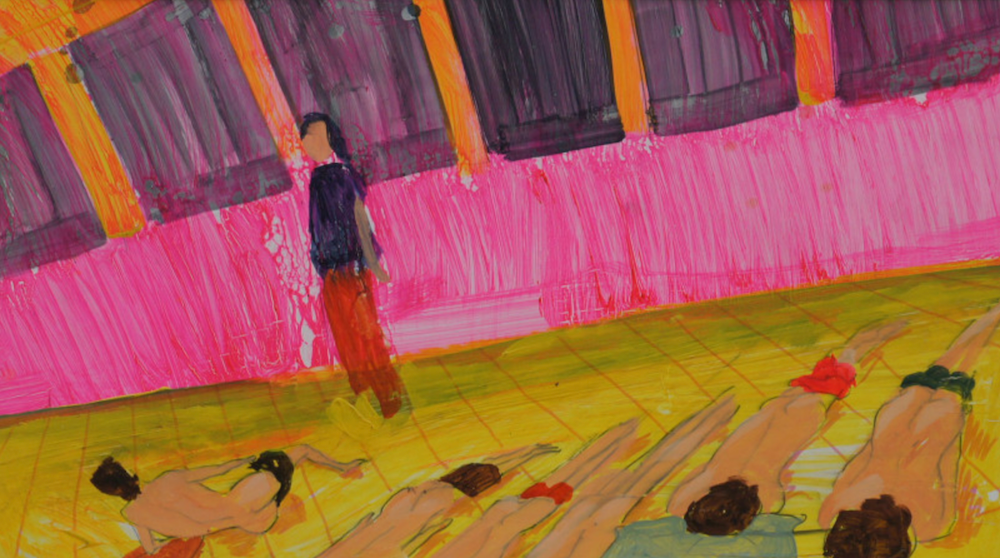 Do Thanh Lang’s “Untitled” from 2015 that’s “drenched in blazes of bold shapes and color.”

One frustration is pricing. Young artists often overvalue their work—placing a notional value on it irrespective of their place in wider art community. And conversely, international collectors often believe that by buying contemporary art in Vietnam, it should be cheaper. “That’s frustrating. We carefully set our prices based on a number of criteria. Allowing the prices to fluctuate would destabilize the artists work.”

The gallery used to rely on international art fairs as a source of income. Besides a small base of local collectors, Quynh sees millennial Vietnamese view contemporary art as both investment items and decorative pieces. “Actually, I knew many of their parents,” the gallerist smiles. They have been gravitating towards the edgy, but figurative work of artists like Do Thanh Lang.

Vin Gallery was born with a goal unlike many contemporary art galleries in Vietnam. It aims to highlight both local artists like Nguyen Thi Chau Giang, who just showed her works on silk, and foreign artists like Yohei Yama, from Japan. 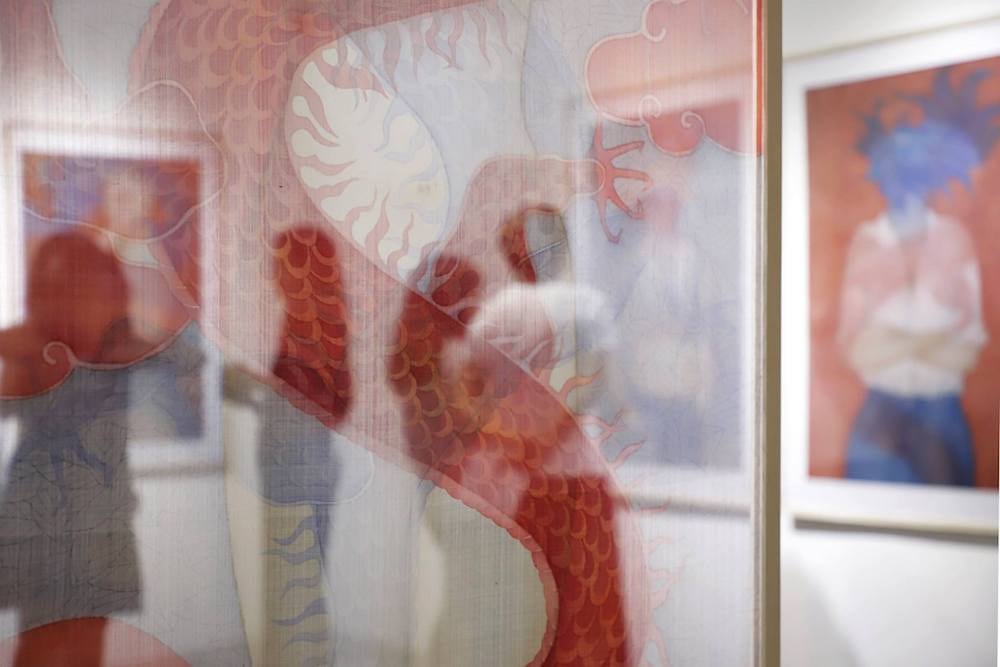 Its founder, Shyevin S’ng, wanted to create a platform where artists from different backgrounds could learn from one another. During the gallery’s beginnings this was especially useful, as the Vietnamese art scene was not yet robust and the gallery, like many others, had issues around licensing. 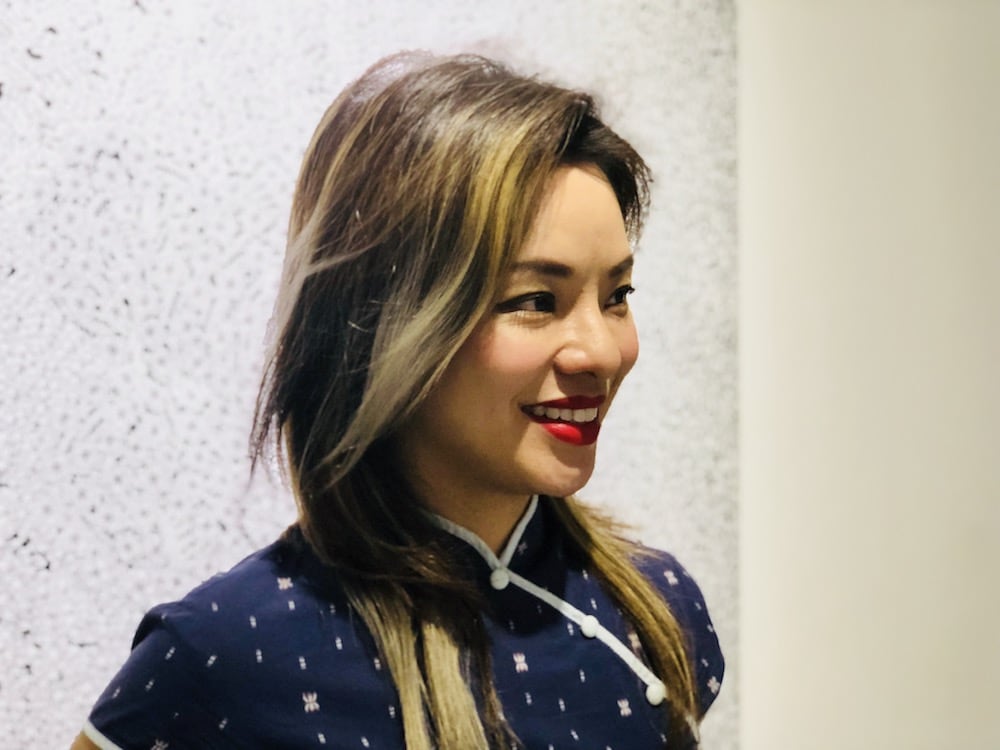 Shyevin S’ng is the founder of Vin Gallery. Unusually, they mix artists together providing “a platform where artists from different backgrounds can learn from one another.”

For the first few years, Vin Gallery limited itself to displaying paintings. As regional artists began to incorporate mediums like installation, video, sound, and sculpture, the gallery began to house a more diverse collection.

Shyevin’s shows in Penang and Ho Chi Minh City act as incubators. They are a precurser before shes selects artists for international art fairs. The international fairs are a key compenent to the gallery’s growth. Here, artist Le Giang’s recent exhibition “Phan Niem” especially resonated with Shyevin for the way it blended traditional techniques with modern perceptions of faith and identity.

“Symbolic elements in Le Giang’s plaster casts, like a waterway and communal house, are also found in my village in George Town, Malaysia. The number of cross-cultural aspects that the arts can touch is astounding,” she says. 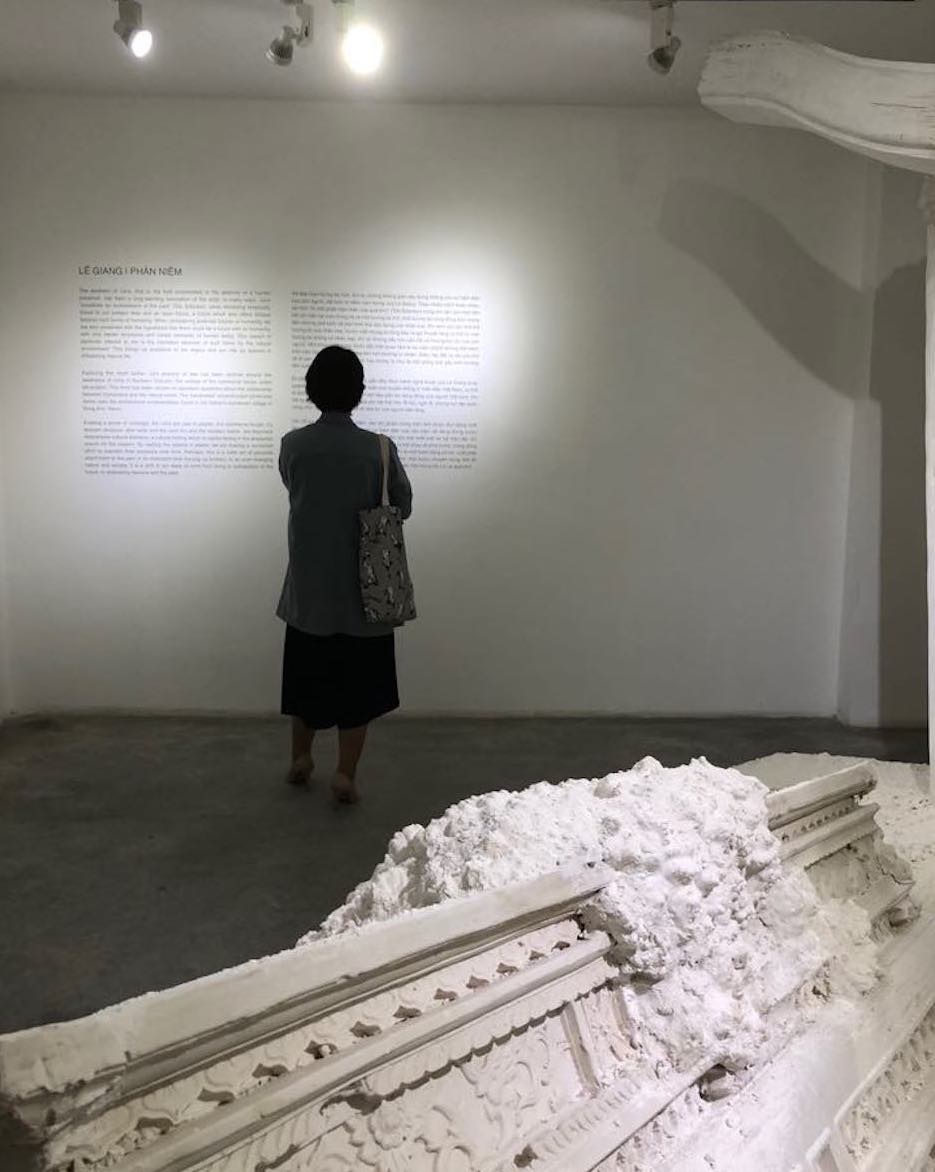 Shyevin is a self-taught artist who entered the industry independently. She believes in the value of art education programs—particularly for children and young adults. Local and international schools organize field trips to Vin Gallery to expose students to Saigon’s contemporary art scene.

There, they have conversations with the artists to better understand their work. Of a career in the arts, Shyevin says, “There exists a stigma which tells us that art is merely a hobby. But by providing tools for understanding the arts, like hosting educational events at my gallery, I can do my part in erasing the stigma,” she continues. “I can help bring talented young people into our community.”

And while Vin Gallery has enjoyed showcasing foreign artists more recently, including Karine Guillermin and Prasert Yodkaew, Shyevin hopes to work with more Vietnamese artists in the coming year. “I believe Vietnamese artists are more prepared in terms of talent, and how they communicate with galleries and clients. They’re becoming much more bold in expressing their ideas,” she shares.

One common challenge—expressed by other galleries too—is artists pricing their work. “We always recommend them to compare themselves against other artists regionally. Attending art fairs can cost the gallery between USD $20,000 and $80,000, so it’s imperative we price the work correctly.” 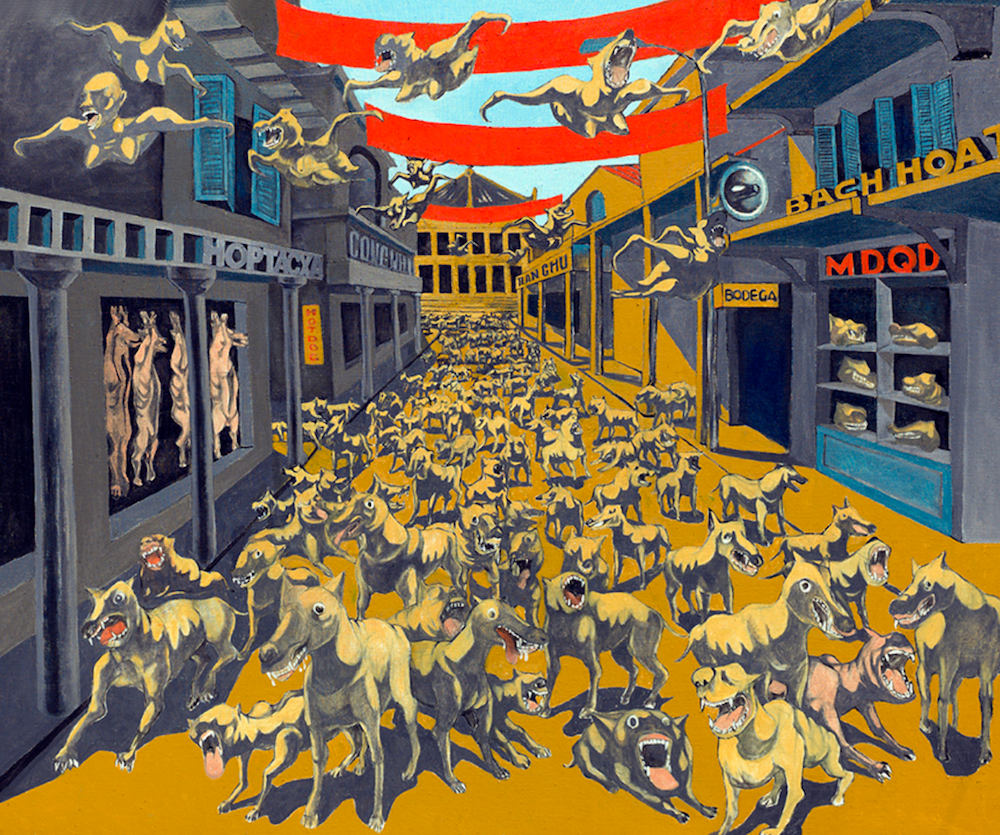 Le Quang Ha’s “Animal Farm” from 2014. “The feedback is ‘how he can create such work in term of topic and skill?’”

Internationally, artists like Le Quang Ha, who the gallery showed at Art Central Hong Kong this year, are drawing attention. The painter creates works interpreted as “an outburst within the official and social framework.” “The feedback is ‘how he can create art in terms of topic and skill?’” Shyevin adds.

“We focus on young people, like those from Generation Y. They seem to experience a lack of opportunity to exhibit their work,” explains Xuan Ha. “And our criteria? The sincerity in their work…and maybe their good energy,” she smiles. 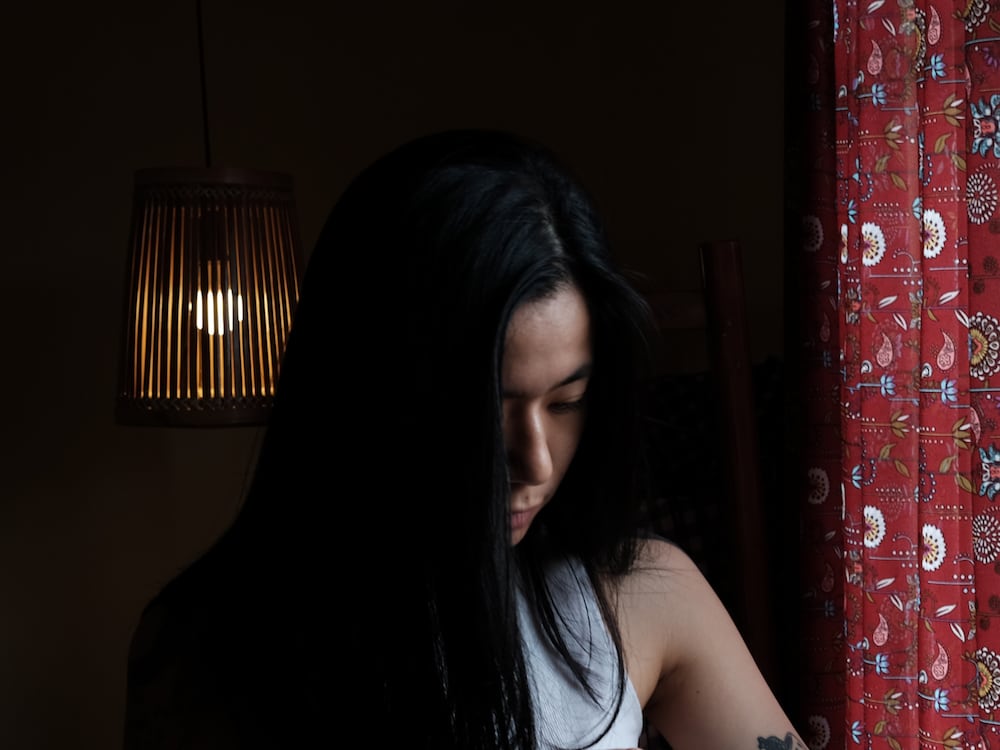 In addition to hosting contemporary art exhibitions, Cháo displays experimental projects like screening video art for Đường Chạy and works like “The Adventure of Optimistuey” by local, underground graffitists.

Late last year Cháo also hosted “Coordinates of Time,” an experimental and installation art exhibition by Phuc Van Dang and Liar Ben. These artists used materials from abandoned construction sites, depicting the relationship between cities and people through their personal memories and perceptions.

Cháo sees merit in collaborating with young experimental artists, especially those using unique materials in their work. For example, photographer Uyen Minh makes collages out of photographs to unravel her childhood memories.

“Beyond her extraordinary photography techniques, Uyen Minh is an expert in using ordinary materials like petals or stamps to convey her ideas,” lauds Cháo curator Vicky.

“I encourage young artists to practice creating art with familiar materials,” she continues. “We see ourselves as an artist catapult, but how far and long they go is up to them,” Xuan adds. But she’s quick to remind us, that the collective’s purpose isn’t to simply make money. “We don’t focus on the business side,” she smiles. 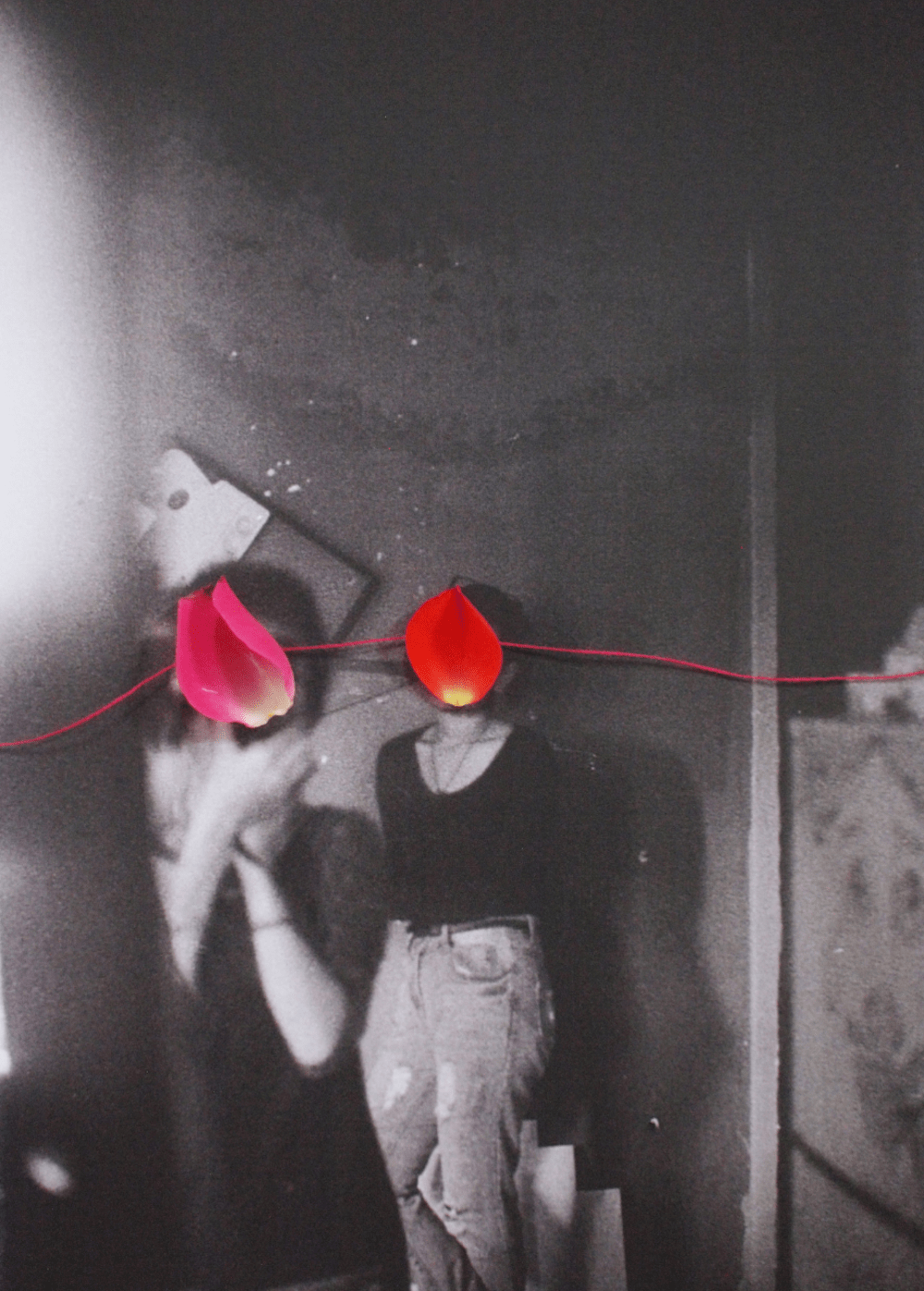 At first, Cháo rented space around the city to showcase its exhibitions. With the growth of popular support for emerging contemporary artists, Cháo opened its first physical location in 2017. Cháo sat in a quiet residential area by grocery stalls and nail shops, exuding an atmosphere of community.

Vicky believes contemporary art galleries in Vietnam are updating the exhibits to reflect artistic themes resonating around the world. This is all thanks to the increased interaction between Vietnam’s artists and the global community. 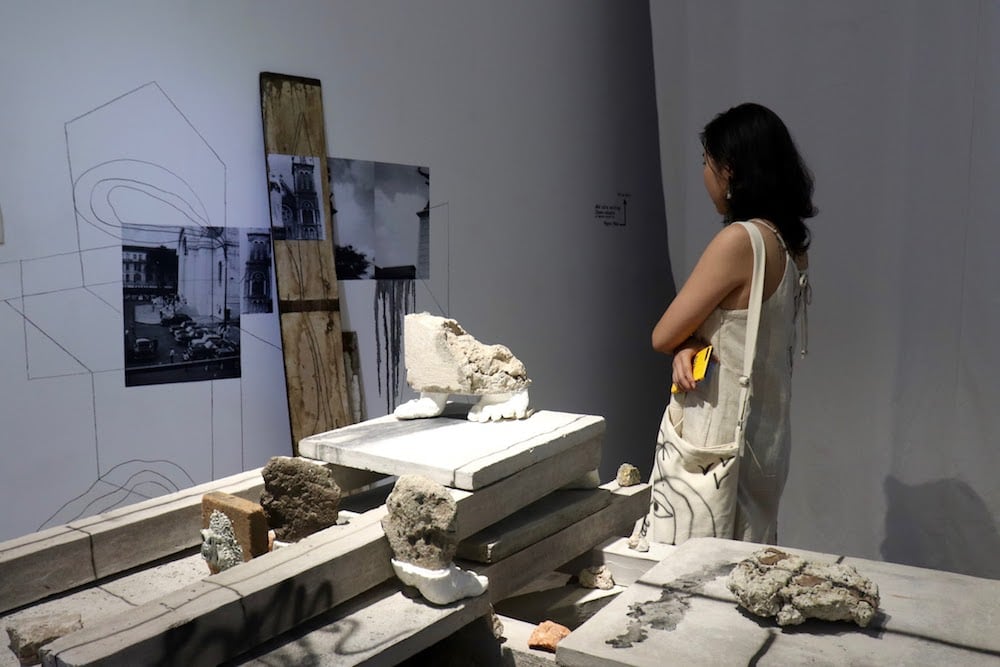 Today the team is looking for a new space in preparation for ambitious future projects. “Our artists are now capable of examining a problem from multiple perspectives. They can also employ different mediums to communicate with viewers,” says Vicky. “We hope to grow and change with them.”

[Video] Tamypu: The Future Is Whatever You Imagine It To Be