Craft Beer In Vietnam: A Guide To Vietnamese Artisanal Brew 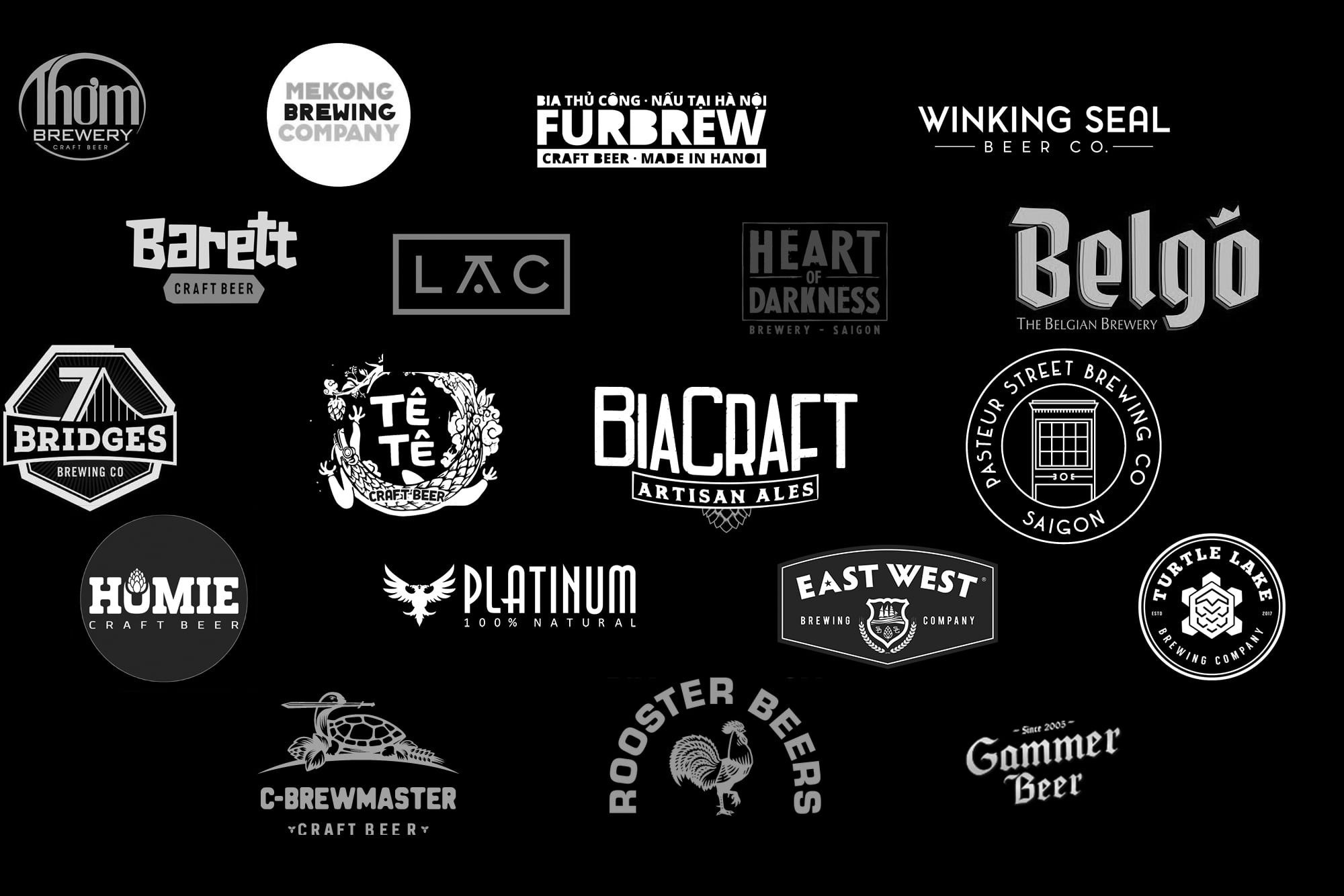 Urban legend has it that when Vietnamese draft beer arrived on the scene in the late 1800s, the reaction was so strong cashiers had to collect money from inside tiger cages. This helped them stay protected from the mobs of thirsty blue collar workers.

Long after Vietnamese draft beer took off, the early 2000s brought with it the introduction of Czech-style breweries. Today, many still consider this market and consumer shift as a major turning point for the country’s beer culture. Today, Vietnam ranks second in alcohol consumption in Asia, just behind Korea. And the country consumes almost 4 billion liters of beer per year. That is a staggering 40% increase in consumption since 2010.

We’re currently witnessing the third wave of Vietnam’s beer-consumption evolution centered around American, Australian, and European styles of craft beer. CNN referred to Vietnam’s craft obsession as a “booming craft beer scene” when they visited back in 2017.

And Vice Media’s food channel Munchies called it a “micro-movement blown into a craft beer craze”. These are sure signs that Vietnam has developed a reputation as one of the world’s newest craft beer destinations. So we’ve compiled a simple, yet exhaustive list (in no particular order or preference) of breweries producing craft beer in Vietnam today…and the list is far from finished…

The ultimate guide to craft beer in Vietnam

With nearly 150 artisanal brews available, BiaCraft has the most extensive selection of craft beer in Vietnam—as well as guest taps and imported bottles. They’re also the only brewery that offers on-the-spot canning so you can take home any beer on tap. Learn more

East West is known for its beautifully articulated European and new-American brewing approaches juxtaposed with locally-sourced ingredients. East West built their microbrewery on-site affording you the unique opportunity to watch the brewmasters make beer right from your chair. Learn more

Hoa Vien imported Pilsner Urquell draught beer to Vietnam in 1995. Since then they learned how to make their own beers in collaboration with licensed brewers from Czech Republic. Today, you can still find their traditional Czech beers at one of their locations in HCMC, Hanoi, and Mui Ne. Learn more

Prided on their 100% natural brewing process, Platinum Beer is your go-to for some of Ho Chi Minh City’s finest ales. Their highly drinkable golden and pale ales are kept simple and to the point. Enjoy a range of sizes from 330-milliliters all the way up to 5-liter towers at select locations. Learn more

Think of Heart of Darkness as the Heisenberg of craft beer in Vietnam. They’ve produced over 150 styles of beer and have 20 taps on site. This is the place to put your palate to the test, especially for those into hoppy beers. Learn more

The American-style Pasteur Street craft brewery pairs European malts with local ingredients like passion fruit, jasmine, and even chocolate from local legends, Marou. They might be one of the first breweries to produce a durian beer, but three gold Asian Beer Medals in 2016 proves they’re not a novelty. Learn more

Surrounded by calm lake waters in Tay Ho, Turtle Lake’s on-site tempered-glass encased brewery is more than enough reason to venture out to this 750-square meter collaborative. With an adventurous, multi-functional space, there’s much more to do than just drink beer at this Hanoi-based brewery and taphouse. Learn more

Rooster Beers are clean and classic. If you like your beer straight to the point, this is the sweet-spot when exploring quality craft beer in Vietnam. They make six styles—blonde, pale ale, dark, wit, IPA, and pilsner, and offer some of the most affordable craft beers in the country. Learn more

With a taphouse outside the hustle of the city center in Hanoi’s Tay Ho district, Furbrew is leading the charge in Hanoi has 20 taps and a wide range of bottles up for grabs. And one of their flagship brews is a pho-flavored beer—talk about craft beer in Vietnam in a bottle. Learn More

Te Te executes their brewing technique with finesse and does so bearing in mind Vietnam’s particular climate and culture. Their light and refreshing recipes make for the perfect drink to beat the heat. If you’re looking for something sessionable, Te Te should be on your list. Learn more

As one of the only Belgian brewery and gastropubs in the city, Belgo’s quirky taphouse is stands out as the place to be for authentic Belgian beers and classic Belgian fare. With brewing equipment shipping over from Begium, Belgo provides an authentic Belgian experience right in the heart of HCMC. Learn more

Lac’s menu focuses on American ales. By combining Vietnamese values with American craft, the result is finely-brewed organic-quality craft beer in Vietnam. Head to their taproom in District 7 for a cold brews and a quiet environment near the Rach Dia river. Learn more

Fuzzy Logic was one of Vietnam’s first craft beer pioneers back in 2012 and are based out of Ho Chi Minh City. Fuzzy Logic are most known for their perfectly balanced and consistently brewed American sytle pale ale. If you want a fair price and excellent quality, check out one of their many outlets from Hanoi all the way down to Ho Chi Minh City. Learn more

Winking Seal is sit in the buzzing central ward of Nguyen Thai Binh. Their beautifully designed taproom is all about exploring Asian-inspired brews in a creative environment. A visit to the bar requires a round of the Mekong Mashup Summer Ale with chips and “chow chow”. Learn more

Homie is the brainchild of a passionate Hanoian husband and wife. The duo is also responsible for Hoan Kiem Lake Beer Temple which doubles as Homie’s taphouse, which offers a wide range of international imports. Learn more

Another one of Hanoi’s underrated breweries is Long Bien. Expect a fair selection of seasonal beers as well as their one-of-a-kind made-to-order service. Go with your own concept for a beer recipe and they will make it for you. Learn more

Thom Brewery doesn’t discriminate when deciding on which styles are suitable for drinkers of craft beer in Vietnam. Offering up Belgian, English, American, and German ales, you’ll find something that compliments any range of style. Their chemist turned brewmaster is in no hurry so expect a precise, science-inspired technique executed with a highly-localized take on ingredients. Learn more

Dong Son is the name used to describe a symbolic traditional Vietnamese drum and this Vietnamese-owned and operated brewery has honed in on the local market while creating beers using 100% natural ingredients and no preservatives. Expect a simple, light and drinkable brew.  Learn more

If you want quality Czech beer in Ho Chi Minh City, give Gammer a visit as they were one of the first pioneers of Western-style craft beer in Vietnam. They have been hauling out massive trays of classic dark and golden ales in their beer halls since 2005. Learn more

As the first microbrewery in Vietnam’s central region of Danang, they aim to brew beer that is palatable for people from all walks of life. You can also find their brews at locations in Hanoi, Hoi An, and Ho Chi Minh City. Learn more

A true nanobrewery out of Ho Chi Minh City that specializes in ales only. All their malts and hops are sourced from the American Pacific Northwest providing an authentic American craft profile. Learn more

C-Brewmaster is Vietnamese owned and operated and has already produced 30 plus beers using all-natural 100% local ingredients. Check out their taprooms in Hanoi and HCMC for a distinctly local variety of Vietnamese craft beer.  Learn more

Think drinking craft beer in a mountain farmhouse in Dalat. Near the foothills of Langbiang mountain, this one-ale-only brewery teamed up K’BE wood-fired pizza and barbecue to offer one of most rustic and unique craft beer experieces in Vietnam. Not to mention, they grow produce in their own garden and also make cheese in-house. Learn more

Hoi An Artisan Brewery is a boutique brewery that aims to create craft beer using distinct and local ingredients. They focus on maintaining a small batch operation allowing their brewers to carefully create new recipes and concepts for each barrel. If you like experimental styles and flavors head to the the “City of Lanterns” for some exploratory brews. Learn more.

Broken Bridge Brewery is one of Vietnam’s newest microbreweries located about an hour outside of Ho Chi Minh City in Binh Duong Province. Their mission is to create high-quality craft beer for Vietnamese people with a sharp focus on experimental flavors. Broken Bridge Brewery currently offers up 8 new brews, and has some of cheapest prices for craft beer in Vietnam with flights of 4 glasses at 100ml each for less than US 5$. Learn more.

Cider made in Vietnam

Saigon Cider was the first to begin brewing this classic favorite in Vietnam. Saigon Cider is the perfect combination of traditional English recipes and techniques with exoctic local flavors from the heart of the country. They offer four distinct flavors with dominated by ingredients like like ginger, Lam Dong chlies, vanilla, and apple. Learn more.

Hanoi cider has been on the scene since 2016 and offers up three unique takes on Vietnamese cider. Their bottles can be found at outlets in Hanoi, Hoi An, and Ho Chi Minh City. Try one of three varieties fused with lemongrass and pomegranante. Learn more.

Other resources for craft beer in Vietnam