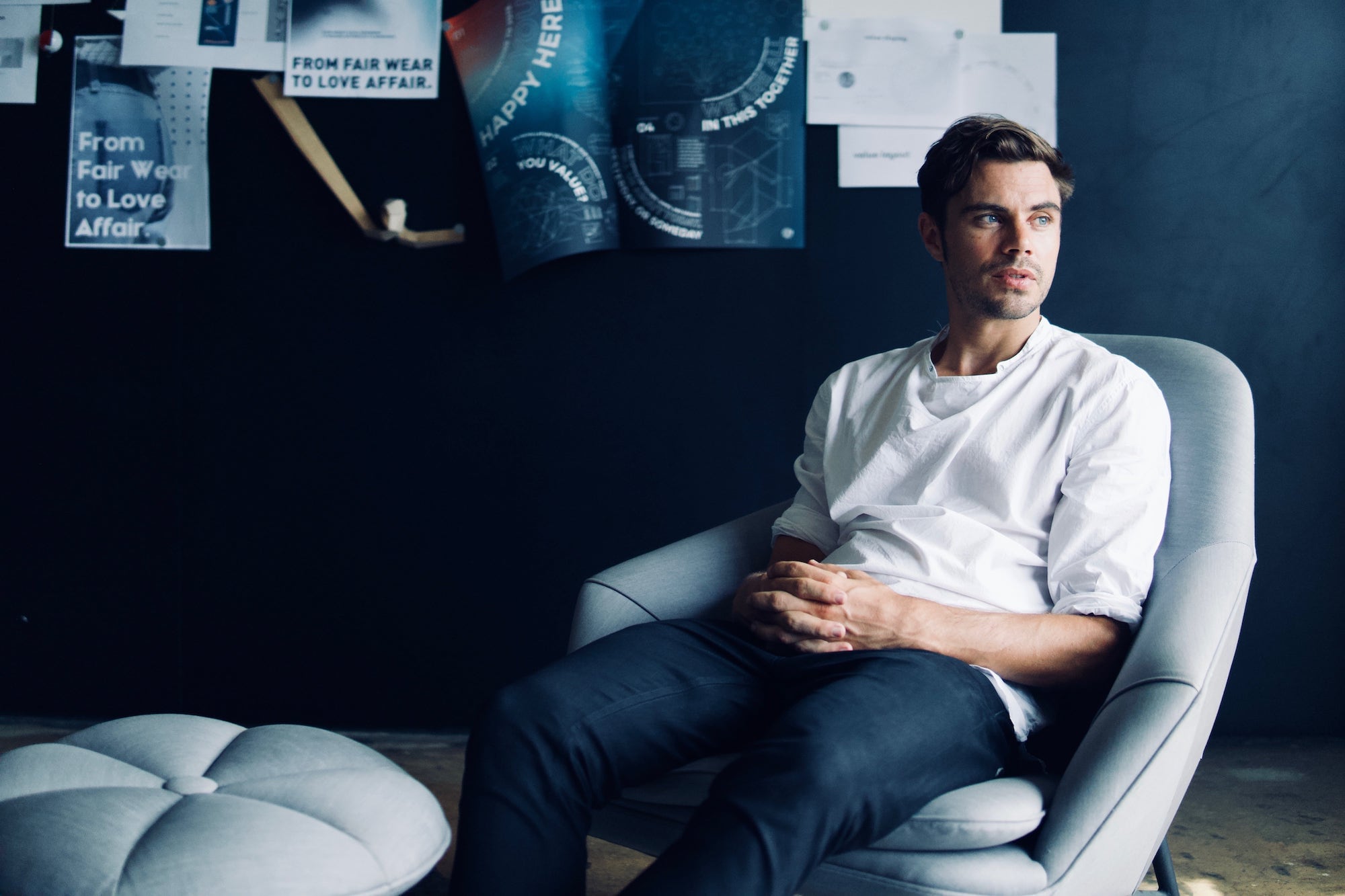 The Evolution3 clothing factory is so far out of District 1 that the Landmark 81 building has become a grainy silhouette. Here, they make DAWN Denim and other garments for the European market including the new SUPER VISION streetwear brand that launches in September.

Inside, German founder Marian Von Rappard is feeling frustrated. A month ago, Evolution3 carried out a series of physical and digital experiments to understand staff satisfaction with The Lab Saigon. They set up a machine that dispensed candy to employees when they turned a button that corresponded to their mood. “Actually, it’s broken now,” Marian admits. “The sad button stopped working—but we didn’t sabotage it I promise,” he laughs.

In another experiment, there was a board with pegs labeled with values like “family and friends,” and “working environment,” that staff wound string around to show the ones they held most dear. There was a “time capsule” staff could step inside and privately write down their suggestions. And a digital tool helped to visualize social connections between employees.

“But we haven’t had time to act upon the feedback from these experiments yet,” Marian shakes his head.

In recent years, major international brands have diversified production. They have set up factories in a number of other Asian countries besides China. The approach of “China plus many” has become “China plus Vietnam plus many” as Vietnam has gained ground as the second largest producer—and often the first choice for footwear. But although the country has a progressive national labor law, it isn’t always applied. And salaries are low—below two hundred dollars in major cities, and less outside. Big brands like Nike have been accused of poorly paying workers kept in sweatshop conditions in Vietnam.

Marian opened the Evolution3 factory in 2010, “as a manufacturer for other European brands.” Then, in 2015, he founded his own brand manufactured here too called DAWN Denim, with two friends. “It’s an ethical fashion label making modern, contemporary tailored jeans,” is how he describes it. And two years ago, he started the long journey to launch SUPER VISION with his friend Linda Mai Phung. SUPER VISION combines his love of cycling—the brand is targeting their clothes at cyclists—with their belief in sustainable production.

The staff satisfaction project is part of ongoing efforts to create a nourishing working environment for the factory’s 175 employees. At Evolution3, they pay employees according to the living wage index—which means staff get salaries above the statutory minimum wage. “We also provide health insurance, English lessons, massages, acupuncture, and a fruit bar,” Marian says, “But these experiments with The Lab were a way to make what we are doing more visible while digging a bit deeper.”

The physical and digital experiments uncovered some interesting information about the staff at Evolution3. Most are happy. Thirty-eight percent of employees said they felt satisfied at the factory, but twenty-six percent said they were unhappy. “We did OK,” Marian says. “Negativity can be addressed but indifference is harder to handle.”

On average, staff at Evolution3 have sixty-eight social connections. And from the values experiment, Marian learned the team want wellness and health the most, followed by a positive working environment and income stability.

Finally, in the suggestions “time capsule” employees expressed practical wishes like clearer processes and fewer changes at the company, and aspirations such as traveling the world.

“I selected the happy button on the candy machine,” Nguyen Dac Toan tells us. The team leader, who has been at the factory for four years, works with buyers in Germany. And he will start traveling the world soon—he just got a visa for his first trip to Europe with the company next month. “What keeps me here is the environment and the relationships between workers…it’s not just about the salary,” he adds. “I have a real feeling that the bosses here value human resources the highest.”

Toan took part in all the experiments. “But the nicest was the time capsule. It gave me the chance to write anything I felt. And what did I write? I asked for a longer break,” he confesses.

“I’ve worked here for almost six years,” Nguyen Van Tien who cuts patterns to make samples says. In that time, Evolution3 have renovated the factory to include a separate cutting area to reduce noise and they’ve purchased new machines like an air-compression system to improve air quality. “I really love the working environment, I’d give it a score of more than ten out of ten if I could.”

Tien has seen the company grow from 40 staff to over 170. But, besides the working environment, it’s the regular company trips have left the biggest impression on him.

Shortly after he joined, Tien and the other staff decamped to Mui Ke Ga, an island south of Phan Thiet. “We made a boat to cross the sea with our teams. I’d only been a part of the company for two months but they still asked me to join,” he remembers.

One of the cleaners seems content too. “I don’t think I’d change anything about working here,” Chi Dung smiles, “I’m very happy.” She tidies the factory and cooks lunch for the staff. “Actually, I just make rice then people bring in their own dishes to add to it,” she corrects us.

Cleaning the sprawling factory complex looks a daunting task. “There’s two of us, so we divide the space into half,” she explains. And staff at the factory stick quite rigidly to working hours meaning employees like Chi Dung can keep a regular schedule. “Only the production team works on Saturdays. If they have extra things to do, they’ll come in for a short time during the weekend…or they take their work home with them,” she adds.

The future for the manufacturers

Marian’s still not satisfied. Fashion as an ethical industry has its limitations. The business is built on shifting trends and disposability. And producing the cotton used in denim requires a lot of resources. “Many brands are claiming that they are ethical and sustainable…but there’s no standard. What does it mean?” Marian asks. But this year, he plans to build a “solar system” of solar panels on the roof of the factory and they’re increasingly using sustainable materials like recycled polyester.

He wants to gather all the feedback and ideas from the experiments and respond to them too, even though he’s still hesitant about the good things he’s heard. “Of course, I question whether the staff provided positive feedback because it’s what they think we want to hear. Lots of the feedback comes translated—so by the time it reaches me who knows…”

“And we might have to fine tune these ideas a bit for next time,” he smiles looking over at the broken candy machine.