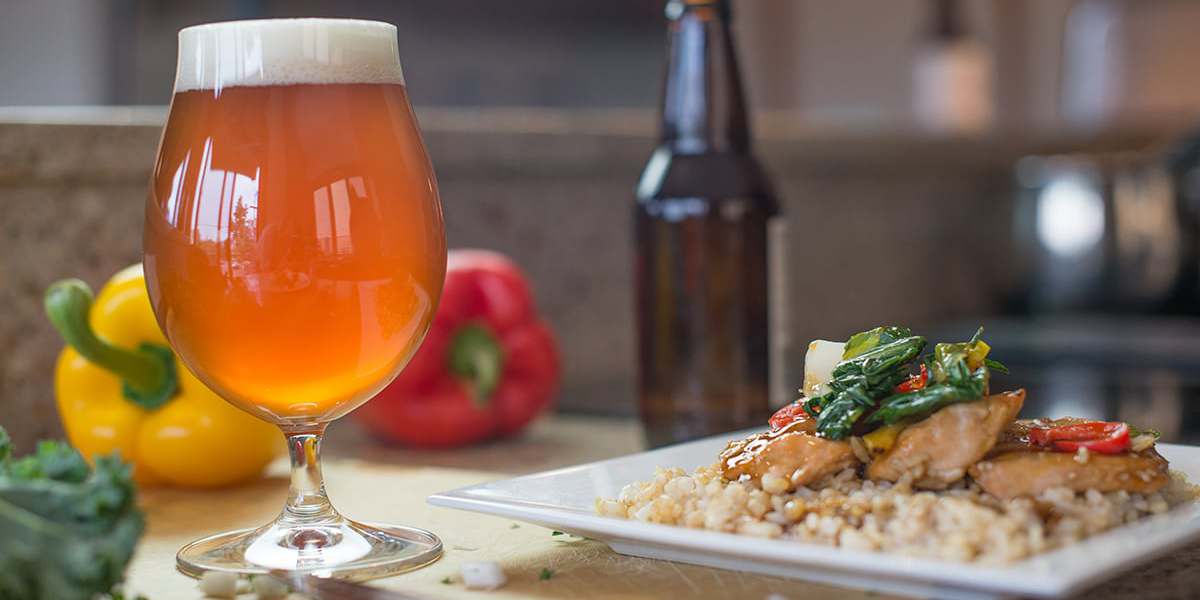 Traditionally, alcohol and food pairing was saved for wine, but the international craft beer scene has produced such a diverse and interesting range of flavour profiles that food is now becoming more than just “soakage” for increased alcohol consumption.

Some of Saigon’s more high profile breweries like Pasteur Street, BiaCraft and East West Brewing Company have their own tailored menus on site, while other such as Tê Tê  and Dong Son Craft Beers’ social media campaigns involve a stream of food and craft beer pairings at alternative restaurants.

As part of our new series to find some of the best food and craft beer pairings in Saigon, we’ll get started with four perfect matches, two dishes at their own breweries, and two away from home.

1. The Best of Asia and America: Pasteur Street Brewing Co.

Pasteur Street Brewing Co. was one of the pioneers of Vietnam’s craft beer scene, and was the first to win international recognition for their inventive brews, which take inspiration from regional ingredients and twist it with classic western brewing techniques. They originally opened up on their namesake street in Ho Chi Minh City, and now have five taprooms, four in Saigon and one in Hanoi. At any of their bases, you’ll find a creatively curated food menu to compliment any of their five homebrews.

Served as either six wings or eight bites, you have the choice of spicy or non spicy. Go for spicy. The crispy, breaded chicken is doused in a smattering of powdered chilli, meaning a creeping afterburn follows the savoury opening bites.There’s a choice of three homemade dippings sauces – porter soy sauce, passion fruit fish sauce and buttermilk ranch. “My favourite is the Soy Porter Sauce,” Smith encourages us. The thick sauce has both a plum sweetness, answered by a deep saltiness, which is a great contrast to the chilli.

As the dish begins to heat up in the palate with each bite, it’s best aided with a few mouthfuls of Jasmine IPA, which doesn’t overwhelm the flavours of the food. Smith explains, “the bold, citrus notes from the citra hops complement the heat of the dish perfectly, toning down the kick but not killing it.”

BiaCraft Artisan Ales is enjoying great success in Saigon, having recently opened their fourth venue in just 3 years, this time right by the city centre at 110 Nam Ky Khoi Nghia. Each BiaCraft venue has a different feel, see their District 2 “hole in the wall”, or their Truong Sa Street “Three-floor beer plaza”. Their latest offering, just a click away from Ben Thanh Market, is a relaxed and intimate three storey former townhouse, and has more of a restaurant feel than the others. The menu is as consistent as ever though, and delivers a great range of food and craft beer pairing options, from oysters to decadent burgers and Reuben sandwiches, as well as smaller sharing plates of perfect beer snacks.

With their tongue lodged firmly in cheek, BiaCraft’s own craft beers are irreverently, or downright lewdy named after Vietnamese puns. Among their homebrews are Xao Ba Co (F*cking Liar), India Summer Ale and Xau Ma Chanh (Ugly But Vain) IPA.

For this food and craft beer pairing, go for the Dung Choc Tao (Don’t F*ck With Me) Pale Ale. It’s at the bitter end of the scale for Pale Ale, with 44 IBUs, but that bitter lead in is perfectly balanced out by a lingering malt fuelled sweetness. It’s also fairly lightweight 5.4% ABV makes it possible to put away more than one.

On the appetizer menu is one of BiaCraft’s finest food and craft beer pairing dishes – Nachos made from crispy fried chicken skin and topped with a medley of beer friendly ingredients. Co-founder Tim Scott breaks down the dish for us, “on top of the nacho is chopped smoky barbecue pork smothered in beer vinegar barbecue sauce, creamy sour cream and gooey melted burger cheese.” Add on top of that a chunky slice of Jalapeno to scythe through the richness of the sour cream and cheese, and what sounds like a hedonistic dish becomes well balanced. Scott’s describes the dish in blunter terms, “Chicken Skin Nachos were handed down to us from God himself.”

It’s a gluttonous, rich and complex mash up, with lots of contrasting flavours, and requires a drink with enough punch of its own to hold up against the barrage. The Dung Choc Tao Pale Ale is the one for the job, according to Scott, “The bitterness of the pale ale helps to round out all the sharp sweetness and acidity from the nachos.”

365º Neapolitan Pizza is one of a number of high standard pizza and pasta restaurants working out of expat haven Thao Dien, in District 2. It’s an unpretentious environment, located at 50 Ngo Quang Huy, with reasonable prices and a simple European aesthetic. The magic is in the food though, a few key details like employing a wood fired oven and using their own homemade mozzarella, gives their fare something of an authentic feel. Owner and chef Philip Moon says that they try to keep the tastes authentic amid the many fusion pizza places in Saigon – this helps them build a strong following from lovers of Italian pizza.

Tê Tê is named after the Pangolin, but is also a Vietnamese slang word for “tipsy”, and the brewers have a simple enough statement of intent, “Delicious craft beer, made in Saigon.” Their brew is made for the hot climate, “a product of its environment,” says head brewer Luis Martinez. Of their three brews, the Te Te White Ale is a great all rounder. Martinez describes their medium bodied white ale as, “An inbetweener, for all occasions. It’s got special citrus and oaty touches, is cloudy and unfiltered, and contains orange peel and coriander seed. It’s full in flavour but still easy to drink.”

With such a contrast of flavours coming from the beer, it’s best to keep the dish simple. Any Italian restaurant worth its salt should have a margherita to boast about, and 365° Neapolitan Pizza certainly does. A hand tossed, wood-fired pizza with homemade mozzarella and olive oil. It’s simply done and is well balanced between rich and delicate. To our minds, for a margherita to be memorable is more about what isn’t done, and this rendition is refined enough for us to understand why it’s so popular with lovers of Italian pizza.

The guys at Tê Tê agree that keeping the dish simple is the way forward, as the flavours compliment rather than compete with one another for your taste buds’ attention. “The fresh, light and citrusy zest, as well as the oaty undertones, make the beer compliment but not overwhelm the fresh mozzarella cheese pizza.”

“The name means easy and light,” explains manager Tony Phan. “That’s what we’re all about here – good affordable craft beer and food in a relaxed, open and pretty minimalist environment.” Gon & Nhe – Food and Beer opened in October 2017 and is nestled along Ngo Thoi Nhiem in District 3. The secluded, tree lined street is a well established hub amongst young professional Vietnamese for eating, drinking and live entertainment – you can stumble from Gon & Nhe to any of Acoustic Bar, YOKO Cafe, Rico Taco or Salon Saigon in minutes. They forego heavy dishes like burgers and sandwiches for the most part, and favour freshly caught seafood to pair with a curated craft beer menu.

Of Platinum’s six beers, head of operations Mark Comerton plumps for the Platinum East Sea for this particular food and craft beer pairing, “it’s light, refreshing and easy to drink, while at the same time full of citrus and grassy hop flavours. It has a modest 4.8% ABV to give it great sessionability.”

Comerton continues after another sip, “it’s pale straw in color and quite hazy, with a fluffy white head. It’s all about freshness with this one. East Sea is the perfect match with spicy Vietnamese dishes, all manner of grilled seafood.”

Since we’re in just the right place for all manner of grilled seafood, we order the Phu Quoc Grilled Squid. One common complaint about squid is that it’s often overdone, and left with a rubbery texture, but that’s not the case at Gon & Nhe. Tony Phan tells us that it’s caught daily and rarely kept frozen for long. He serves us up a whole squid chopped into snackable ringlets, plenty for a lone diner and enough for two. It’s perfectly done – washed in saltwater and then fresh water, every so lightly seasoned before spending just a few minutes on the grill. On its own it’s a subtle dish, not at all overbearing or fishy, but on the side is a signature green chilli dipping sauce, or muoi ot xanh, a paste of coriander and green chilli. It’s made thick by a dollop of condensed milk, and adds a sharp lick of heat to proceedings.

The Platinum East Sea couples with both versions of the squid, be it subtle and sauceless, or chilli dipped and fiery. “The light seafood flavour makes a very good pairing on its own, as it doesn’t get blown away by the fruity flavours of the beer, rather it is well complemented by it.” explains Phan. “But if you go for the spicy dipping sauce the freshness of the beer helps to cool and dull down the after burn.” We spend the rest of the dish alternating between saucy and bare, finding the right balance between copious amounts of refreshing beer.