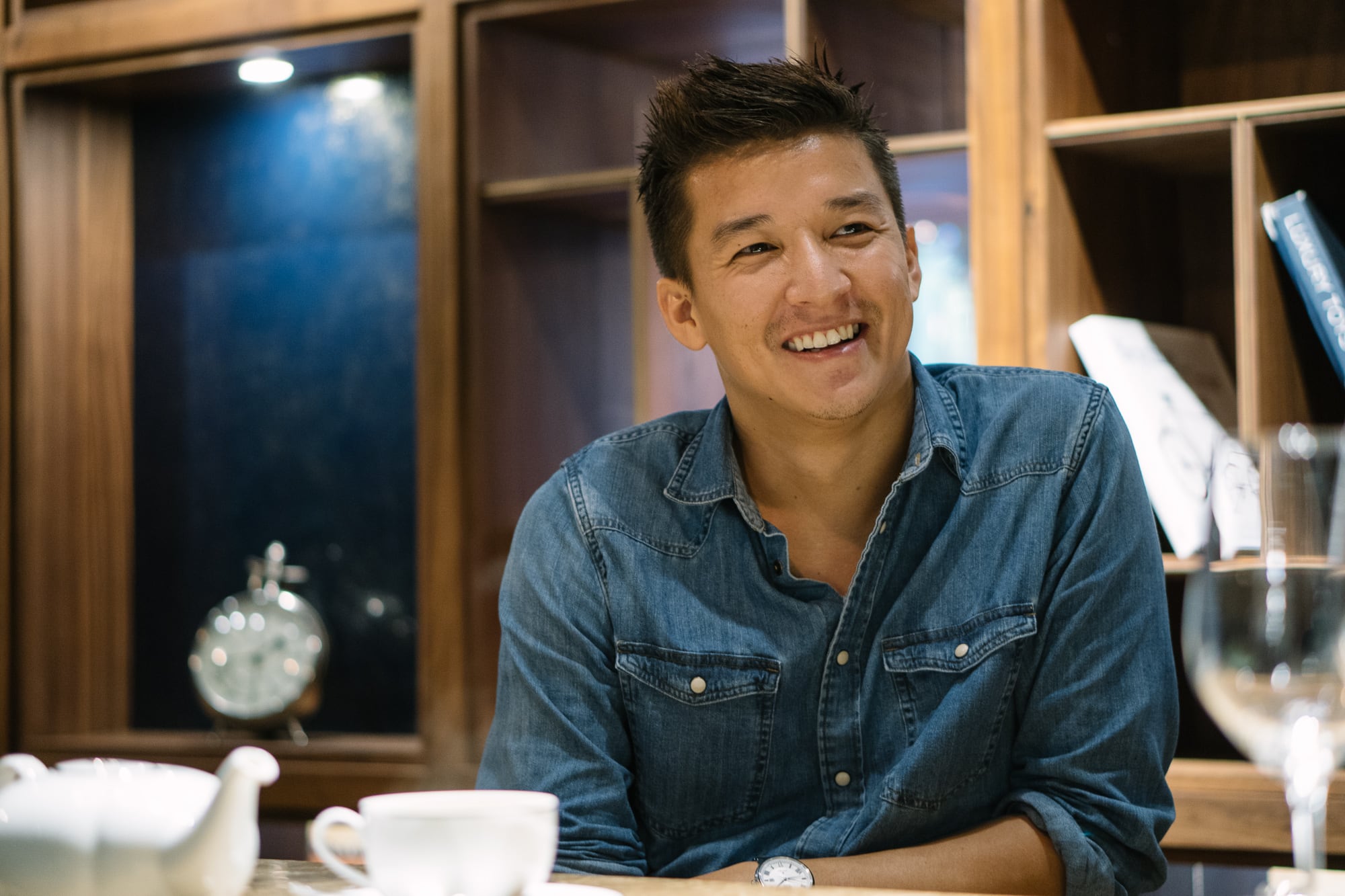 “I still have no idea why I did it,” Jean-Marc Nguyen Quoc Trung laughs. The French-Vietnamese chief operating officer for a Saigon-based furniture company is talking about the twelve-episode Bachelor Vietnam series that finished shooting in Danang in mid-July. HTV7 has aired seven episodes of the show so far in which Jean-Marc is the reality show’s bachelor who has to choose between twenty-four female candidates.

During the emotionally and physically draining month of shooting The Bachelor Vietnam, he lost eight kilograms. “You don’t have a phone, a computer, or any external connections—you’re in a bubble which multiplies everything by ten. It’s so deep and emotional, and so exhausting that I didn’t recognize myself by the tenth episode…” Jean-Marc remembers. The emotional intensity of twenty-five strangers thrown together for four weeks without distractions also produces some surprising plot twists—for The Bachelor Vietnam it has been the news of its “unprecedented same-sex love story.” “And there’s more suprises to come,” Jean-Marc Nguyen Quoc Trung promises.

So, even though he can’t reveal the show’s ending yet, we met with Jean-Marc Nguyen Quoc Trung at the Park Hyatt Saigon a few days after his 34th birthday. We wanted to understand why the self-confessed former “playboy” decided to try to find love on a “very stressful” TV show and to get his take on the moment when Minh-Thu professed her love for another candidate.

Is appearing on a reality show like The Bachelor Vietnam a good way to find love?

I wouldn’t say it’s a good way…but it’s one way. The important thing is the girl you meet, and it doesn’t matter where that is. Before the show, I was thinking it’s bullshit. How can a guy find love in a setting that’s so contrived? But having done it, it’s completely different.

Also, I feel modern dating, and dating apps like Tinder are so crude. The first question is “How are you?” The second is “Will you sleep with me?” But conversely, now some girls get scared when you talk about what you want in life. I’m very old-fashioned in that way. Plus I feel 35 is the perfect age to settle down. You have kids, and then you’re 50—and so you aren’t as attractive anymore so there are fewer temptations.

Can you remember the moment you agreed to star on The Bachelor Vietnam?

I don’t watch TV and especially not reality shows. But I read some interviews—including the one with the producers in Vietcetera—and I respected how they wanted to approach the show. We have a messenger group chat set up with my family, and they all immediately said: “Do it!” So, after turning down the opportunity twice, I decided to join the show.

How did you prepare for the month-long shoot?

There was a temptation to watch editions of The Bachelor from other countries. But I didn’t do it. I didn’t want to let that influence how I approached the show. It was tough. When you start a new project you want to understand it as deeply as possible and perhaps pick up some tricks and tips to help you handle unknown situations. It was a risky decision but I don’t regret it—I got to write my story.

Was there any attempt to script the show?

Before we started I thought everything was scripted, or that they’d give directions for everything. And in fact, they did give me some sentences at the beginning of the show. However, I did the lines so badly that they let me do it my way. That remained the case for the entire month. My part was real—for the girls’ part, I don’t know.

What was a typical day of shooting The Bachelor Vietnam like?

I had to be the first one ready. So on an average day, I’d wake up at four or five in the morning. Then we’d start preparing—make-up and styling. Then you spend most of the day waiting which gives you so much time to think. And of course, a lot of time is spent meeting the girls, trying to analyze whether we could be the right fit together.

How did your ego survive rejections and some negative feedback from the candidates on the show?

Perhaps I wasn’t what they were expecting. I’m not a millionaire and I have an average physique. Even my Vietnamese wasn’t great at the start of the show. The producers gave me a dictionary—so during shooting, I learned new ways to express myself.

In the first episode, three girls refused when I gave them a rose. And during the shooting of a jet ski segment, one girl told me, “Your body’s not so nice—it’s fulfilled only 60% of my expectations.” Naturally, I had nagging doubts. I asked myself: “Who is this bachelor that no one likes?” I was the one who had to prove to them that I was the right guy, not the other way around. I really had to put my ego to the side.

From your perspective how was episode five, in which Minh-Thu asked another candidate, Truc Nhu, to go home with her?

Episode five was surprising. Everyone lives separately during the month so I couldn’t have known they had a crush on each other. And, at first, I didn’t understand what was happening. I thought Minh-Thu just didn’t want to leave alone and was selfishly trying to take someone else with her.

It was such a brave thing for her to do. I’m concerned at the media scrutiny she’s facing now in what can still be a conservative country.

When I got out I’d received a lot of messages. There were lots of positive messages, but after episode five there were some negatives ones—asking why I tried to convince the girl to stay. But watching the show I understand why people felt that way. I need to be patient—it’s hard at the moment but once the entire show has aired people will view things differently.

That episode of The Bachelor Vietnam has propelled the show into the world’s media. What’s it like being at the center of this?

What’s pleasing is that the story is featuring in the serious media—not just the gossip media. My story has already appeared in Figaro. The narrative is of me returning to the birthplace of my parents and trying to do something successful.

And the message of the show is that love can happen in so many ways. And that’s something people are identifying with and being inspired by. So, I don’t mind if they don’t talk about me—I want them to talk about that message…

Who was the first person you called when you finished shooting and could reconnect with the outside world?

The first person I called was my mum. I thought she’d want to know if I’d chosen someone…but she didn’t ask me. Then we had dinner back in Ho Chi Minh City, and she didn’t ask again. But at the end of the meal, she looked at me and said, “I know what you did.”