LaLiga Opens In Vietnam: What's Next On The Pitch | Vietcetera

LaLiga Opens In Vietnam: What's Next On The Pitch

LaLiga Opens In Vietnam: What's Next On The Pitch 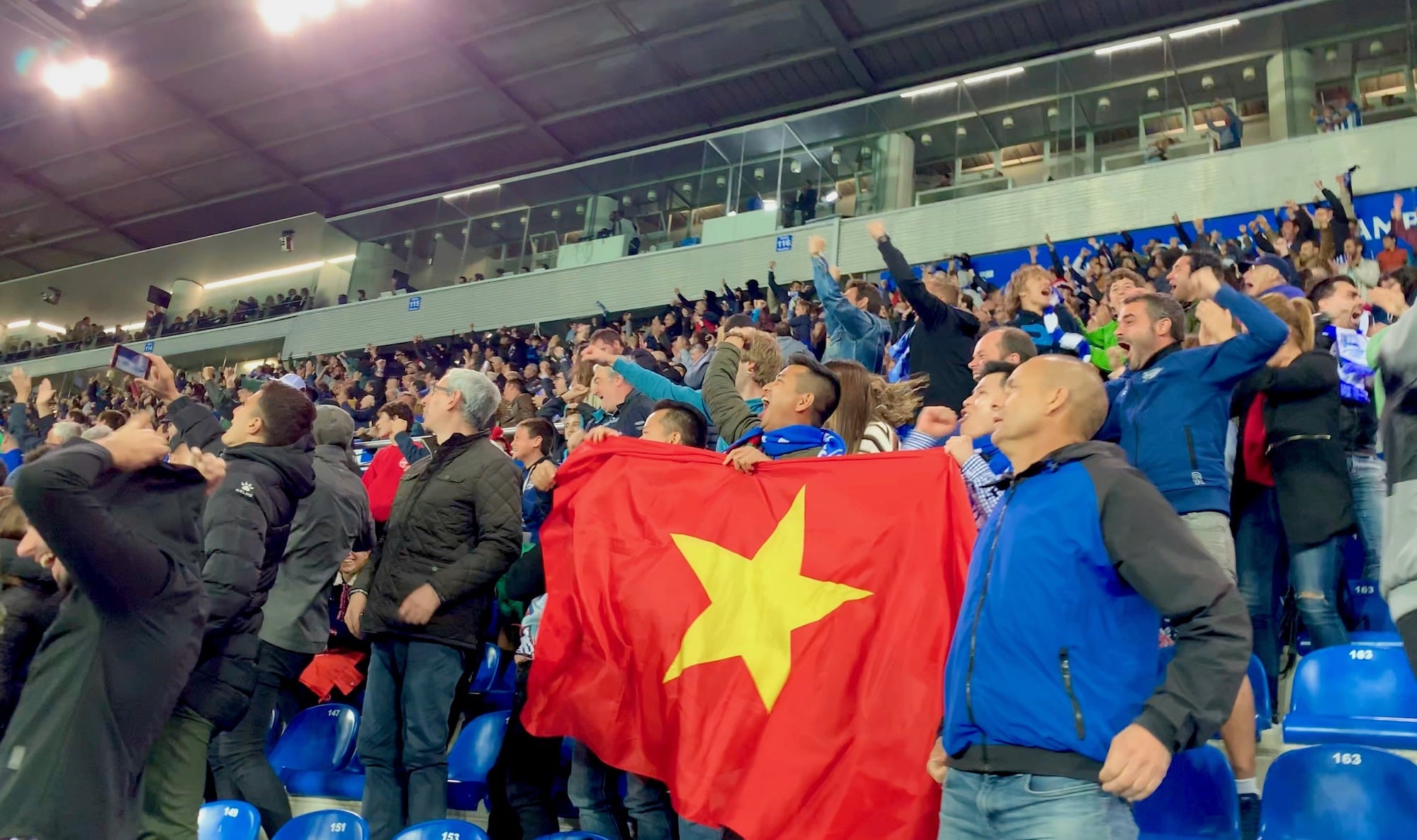 December 10th of 2019 marks a historical date in the men’s football history of Vietnam due to its highly anticipated and (finally!) well-deserved win in the SEA Games 30 championship after 60 years. Not only that, the women’s football team also won their sixth gold medal of SEA Games this same year.

For a nation whose identity and patriotism is bounded by football, altogether all this is more than just a celebration but also a step forward for the country in terms of hope. The nation’s unrelentlessly optimistic attitude and unconditionally fanatic support towards its team only further adds hope to its World Cup dream. But more than hope, what contributes to turning this into a reality for Vietnam is the rising interest in investment from foreign professional football league systems, namely LaLiga.

How could a world-class football league like LaLiga bring Vietnam closer to the international stadiums? Our team at Vietcetera has had the opportunity to sit down with LaLiga’s Vietnam representative Brian Wright to hear about the ways in which hope for Vietnamese football can turn into reality.

Why is LaLiga choosing to open an office here in Vietnam?

Our presence in Vietnam, which actually began over 2 years ago, is part of LaLiga’s global expansion strategy in which we currently have a physical presence in over 50 countries worldwide. And of course, at the heart of this expansion strategy are our fans; LaLiga football is enjoyed by a total of 2.7 billion spectators in 183 countries around the world. With that being said, each fan has their own culture and habits, so we think it’s imperative for us to develop a relationship with each and every one of these cultures. By doing so, we can learn how to bring LaLiga closer to them. 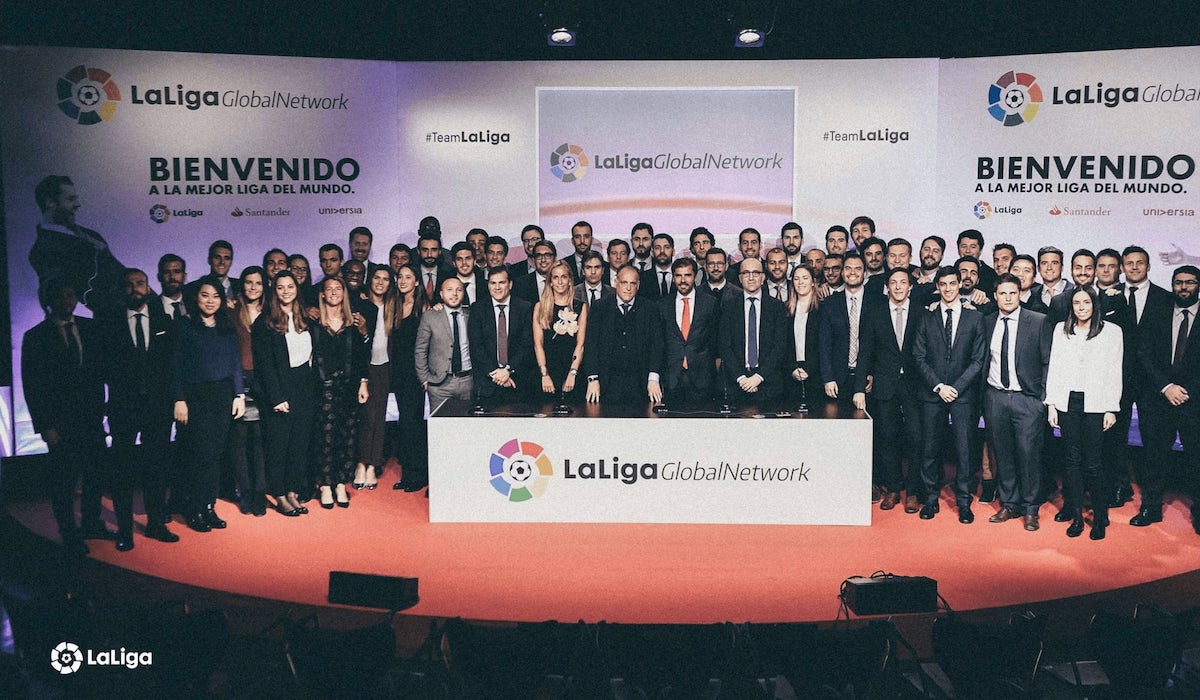 “LaLiga football is enjoyed by a total of 2.7 billion spectators in 183 countries around the world.” | Source: LaLiga.

No two countries are the same, and so we believe no two strategies should be the same. Thus, we currently have a physical presence in over 50 countries worldwide, which is indeed something that very few other sports brands, or any industry for that matter, can say.

We want the fans of Vietnam to know that LaLiga understands, admires their culture, and appreciates their passion for LaLiga and for football. Thus, strategically speaking, any and all projects that we choose to pursue here have this as the ultimate objective.

What are your core responsibilities as the manager for the Vietnam office?

Vaguely speaking, my job is to manage everything LaLiga does in Vietnam. But in reality, I’ve always considered my role here to be that of a strategist. The most important part of my job is to identify these opportunities that will help bring us closer to the fans of Vietnam. From events and campaigns to partnerships, contests, and even social responsibility initiatives, as long as they allow us to interact with our fans in a meaningful way, to me they are all worth pursuing.

But as an executive, this varied mandate also means that you’re constantly evaluating everything at once, and the range of responsibility is rather large. In a given day, my first meeting may be with a local NGO to prepare a charity outreach project, followed by a meeting to organize a large scale event in the center of Ho Chi Minh city, followed by a meeting with the Vietnam Football Federation, and so on. But it’s precisely the diversity in these projects that LaLiga is open to pursuing that I believe really makes our presence so unique and meaningful to fans. 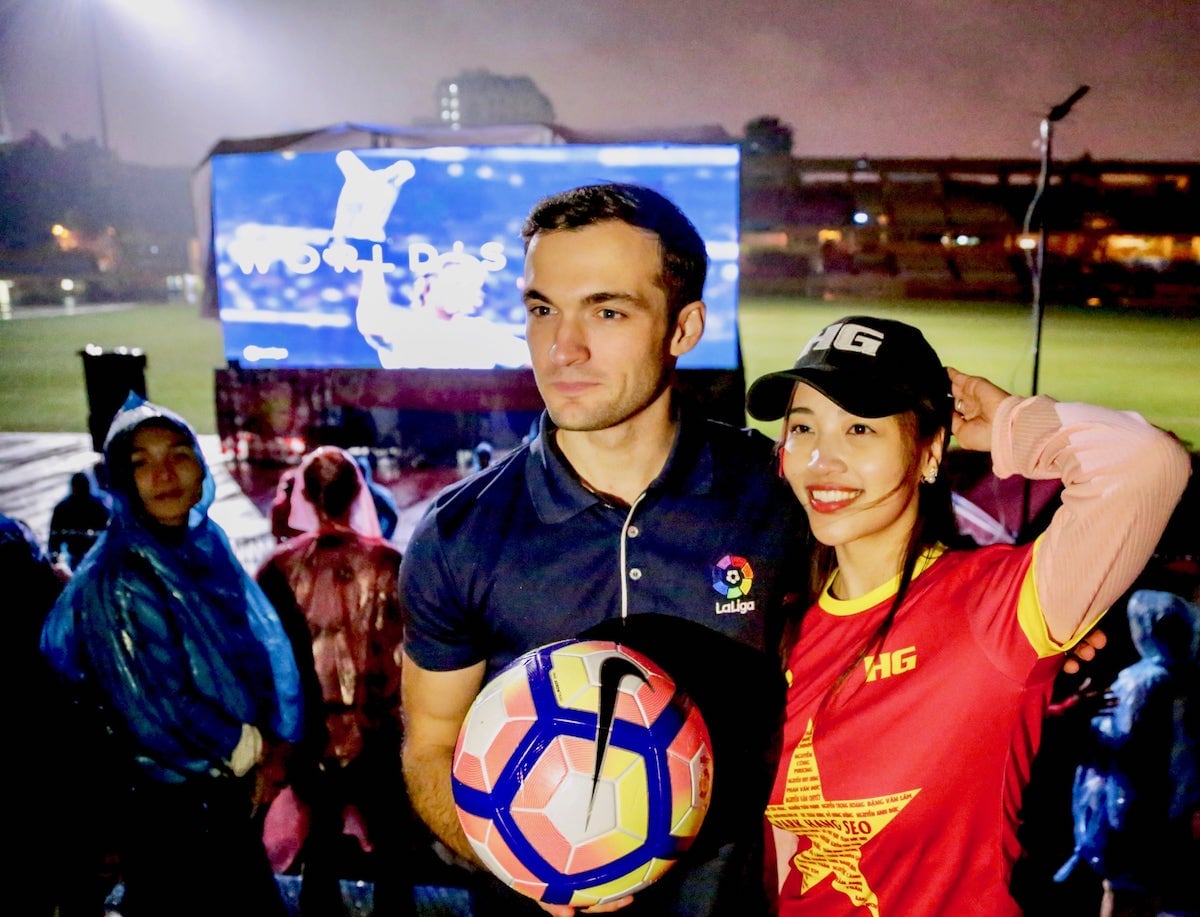 “The most important part of my job is to identify these opportunities that will help bring us closer to the fans of Vietnam.” | Source: LaLiga.

When international firms begin to expand (both within the sport industry and in others), they tend to set up a headquarters in a given region and treat the entire region in a monogamous way, strategically speaking. Moreover, what tends to happen is that these local offices tend to be more sales-oriented and revenue-driven. But I think Vietnam is vastly different from each of the countries in the region and would always require its own customized approach. Thus, we focus more on creating quality and intrinsic value, which are evidently shown through our many projects.

What can we expect from the development of football in Vietnam over the next five years?

What’s been happening in Vietnamese football is incredible, but I also think it should surprise nobody. When you have a country of 100 million people that is so wholeheartedly devoted to football, it’s just a matter of time before that country becomes a powerhouse. In addition, this has an exponential effect on the population; Vietnamese children who are now witnessing their heroes winning Suzuki Cups and SEAGames will be further inspired to pursue football.

Over the next 5 years, I have no doubt that the upwards trajectory of football quality and results in Vietnam continue to grow. We will soon see that this group of talented young players in the U-23 age range are not some fluke or accident, and we will be able to witness the group that is currently U-19 and U-17 bring further triumphs and accolades to the Vietnamese people. 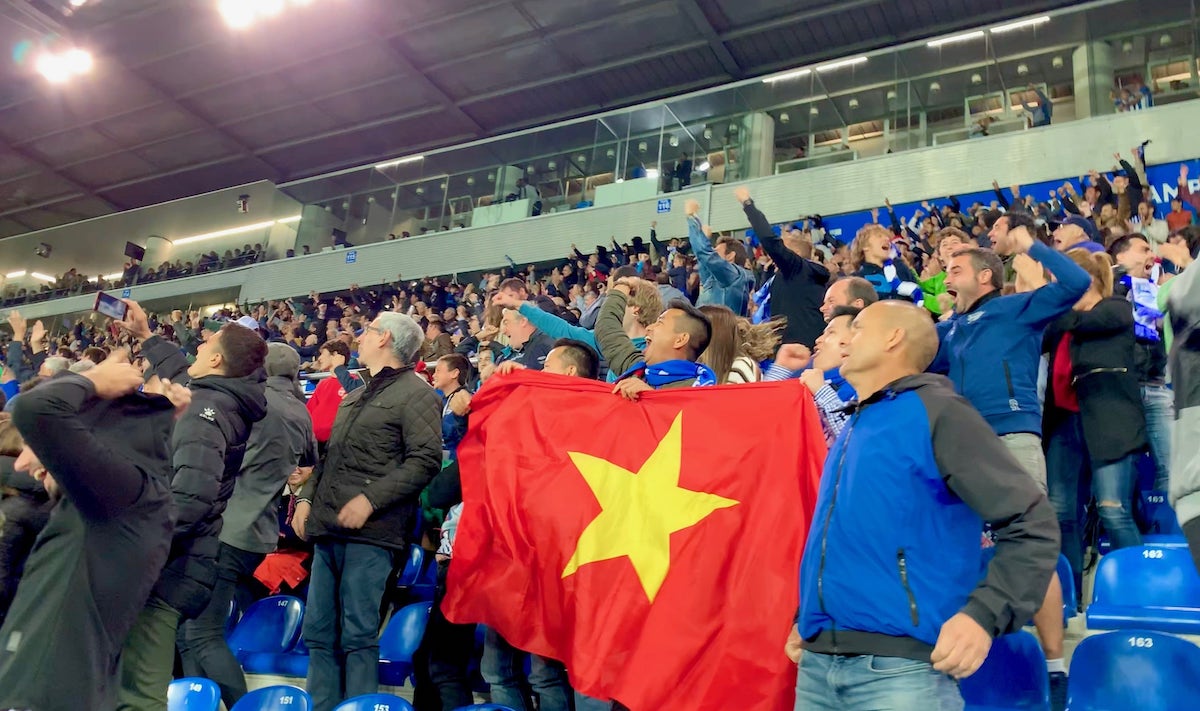 “When you have a country of 100 million people that is so wholeheartedly devoted to football, it’s just a matter of time before that country becomes a powerhouse.” | Source: LaLiga.

Thus, in these next 5 years, I would expect to see an increased attention from European clubs to Vietnamese players. Van Hau playing for the Dutch club SC Heerenveen will no doubt be the first of many to come. The Vietnamese play a very tactical and technical style of football, which in recent years has been valued over speed or strength on the international level. This is also what I believe makes Vietnamese players perfect for LaLiga, as this is where the most tactical and technical football in the world is played.

How does Vietnam compare to the other markets in LaLiga’s areas of focus?

Each market has its own qualities that make it an exciting place for us to be in, and each of my colleagues has fallen in love with the countries they manage, just as I have with Vietnam. While it’s true that the strategy we pursue in Vietnam may be entirely different than that of Egypt or Argentina, what we share is this passion from the fans that really makes it a privilege to be a part of. Football is one of the few truly international languages, and so while the countries, cultures, and politics may be a world apart, the passion of football is universal.

What is true is that some markets have a richer tradition of football than others, and so this will always impact the strategy chosen. But it’s clear that football is the number one sport in Vietnam, and I’m grateful to be able to work and interact with such enthusiastic and receptive fans. 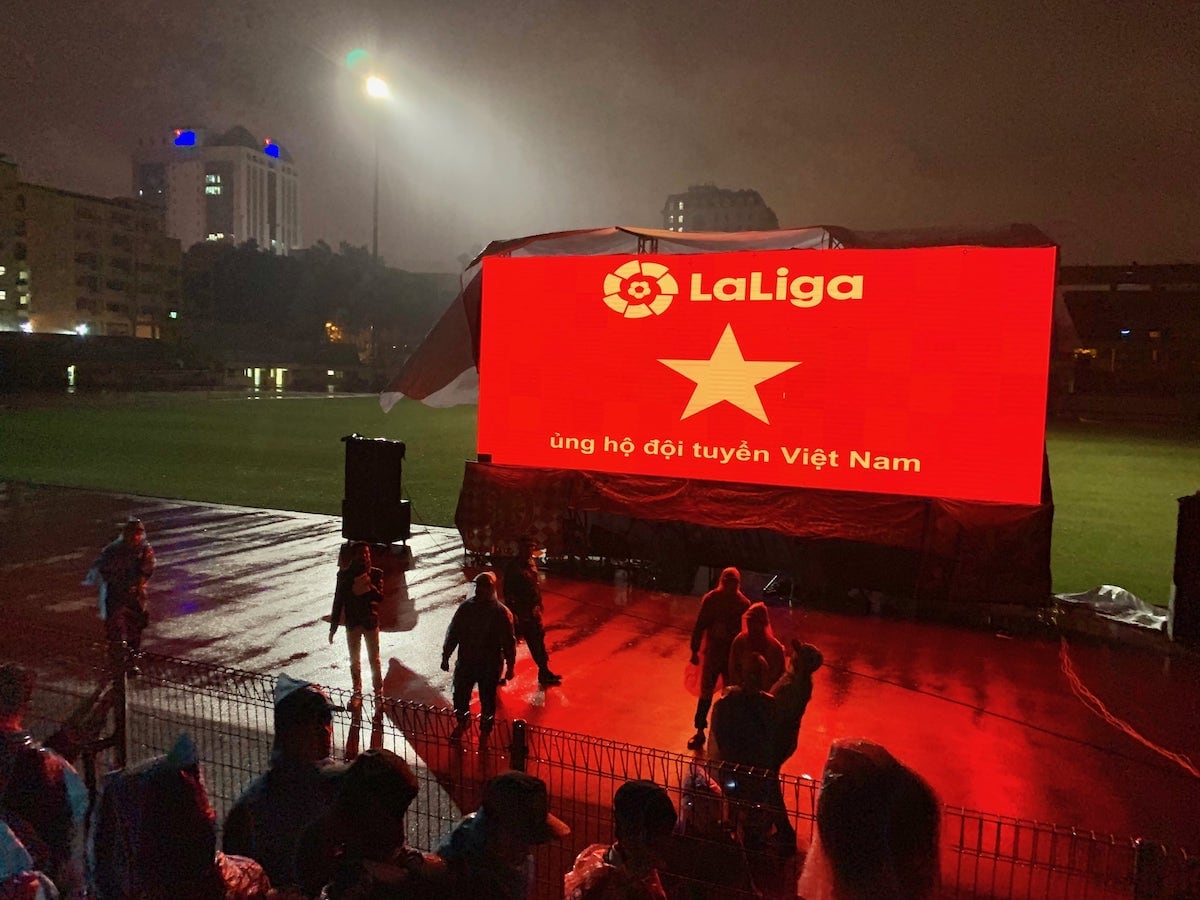 “Football is one of the few truly international languages, and so while the countries, cultures, and politics may be a world apart, the passion of football is universal.” | Source: LaLiga.

Before we discuss what’s missing, I think we should acknowledge first what is blooming here. The quality and the potential exists here, as undoubtedly seen with the nationally recognized U23 soccer team. The athletes of Vietnam pursue sport with a very disciplined approach, and the fans who support them are just as impassioned and serious about the role that they play. When Vietnam plays, it feels more like a 90-minute celebration than a match, and the fans always support in a respectful and safe manner, maintaining a fair-play approach both on and off the pitch.

Nevertheless, growth always comes from having room to improve. In the case of Vietnam, I think further developing the structure and organization of youth football will be the key in securing the dominance recently obtained within the region. Not only could this extension allow Vietnam to further reach a global scale of growth, such a development could also be extended towards the women’s sports sector. It’s always amazing to see half of the fans in attendance at My Dinh or Hang Day Stadium to be women, so given this clear enthusiasm the women of Vietnam have for sport, I believe an increase in institutional and structural level of women’s sports development would be beneficial in the long run too. 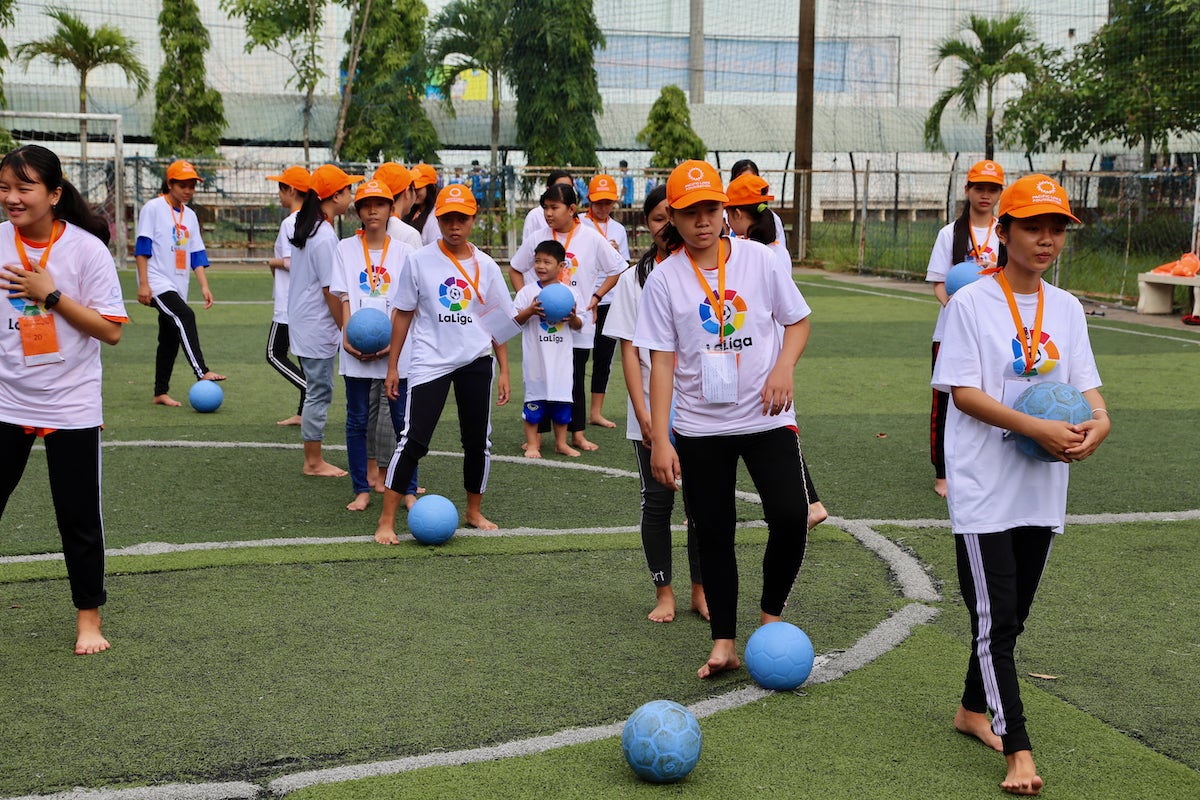 “Given this clear enthusiasm the women of Vietnam have for sport, I believe an increase in institutional and structural level of women’s sports development would be beneficial in the long run too.” | Source: LaLiga.

How far away is Vietnam from developing an international level of representation for football (e.g. qualification to the World Cup)?

While I can’t speak entirely for Vietnam at large or for what may come of the future, what I can say is that everyone hopes for the Vietnam Football Federation (VFF) to qualify for the 2026 World Cup. Taking this seriously means implementing a tremendously disciplined development plan for the group of players who are currently between 15-18 years old.

This is a topic that often comes up during discussions between LaLiga and VFF for quite some time now. We are hoping to reach an agreement with VFF – where we would support this age group in terms of preparation, along with all grassroots development using our world-class development methodologies. I have no doubt that within 6 years training with LaLiga and our methods, a Vietnamese team would surely achieve this qualification.

Can you share with us some initiatives that LaLiga has done in Vietnam?

We’ve done a lot of things that we are proud of, and we have even more to come. Among them, the most meaningful initiative was the charity football camp that we organized with our NGO partners Pacific Links Foundation last summer in Can Tho province with over 800 girls. During five full days, we organized football workshops for these girls, both in the classroom and on the field, with the objective of empowering them to pursue sport and develop their self-confidence. Being there and able to witness their excitement was really significant for me on a personal level, as it showed me once again just how much power football has as a mechanism for bringing positive change. I will always be on the lookout for meaningful social responsibility projects such as this, and I have no doubt that we’ll be there again next summer to reorganize this camp. 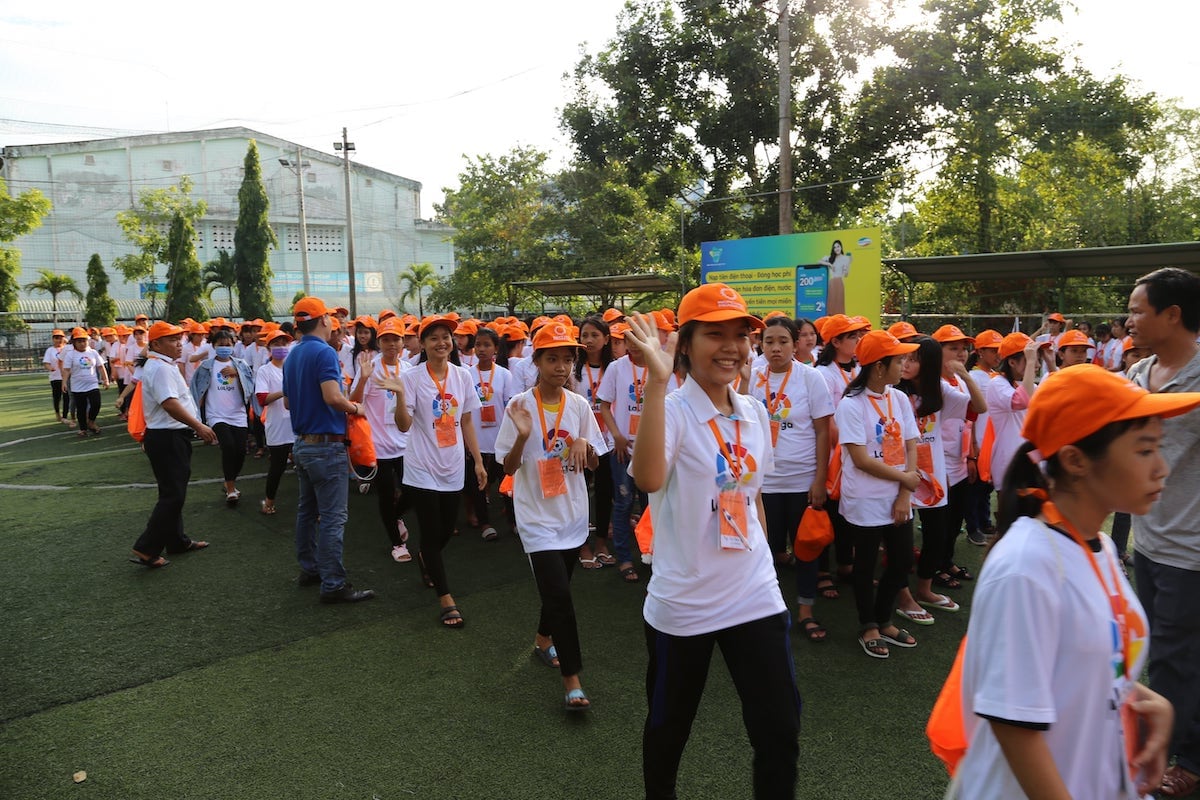 “Being there and able to witness their excitement was really significant for me on a personal level, as it showed me once again just how much power football has as a mechanism for bringing positive change.” | Source: LaLiga.

As I mentioned, however, some of our most exciting projects are yet to come (some of them very soon). What I can say is that we are always looking for local companies to partner with. Football is such an incredibly versatile thing to create value, so there’s really nothing we cannot do. Hence, we’re always interested in meeting new, like-minded partners with whom we can brainstorm cool ideas together, many of which I am sure are Vietcetera readers who have been thinking about using football as a part of their companies growth strategy too!