Tapping her multi-cultural background, Xuan expresses her voice most vividly through photography. 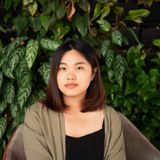 A fixture in the European fashion scene, Nhu Xuan Hua is renowned for her ability to put "soul" in her artwork. Inspiration for her work flows from Surrealism, with its bold colors and ornamental installations. Xuan is also the photographer behind the famous 2018 BTS cover for TIME Magazine.

Born into a Vietnamese family in France, the artist is now based in London. Tapping her multi-cultural background, Xuan expresses her voice most vividly through photography. Each of her artworks tells a different narrative: stories about people, objects, and events. Sometimes, she finds herself both the narrator and the subject of her projects.

1. Which fictional character do you identify with the most?

Maggie Cheung in Olivier Assayas’s Irma Vep. Maggie was one of the major female actors of the Golden Age of Hongkongese cinema.

In Irma Vep she plays herself — a foreign actress in Paris who is cast as a crooked vampire in a remake of an old silent movie, clad in a latex costume. Maggie is an actress and an observer, and it's the environment she finds herself in that eventually shapes her.

I can relate to many layers of the character and the film.

2. When was the last time a piece of art gave you goosebumps?

Last summer, I read Giovanni’s Room by James Baldwin when staying at my aunt’s house, 3 hours from Paris. It's a story of a young black American man, who is engaged to be married to a woman while having an affair with a man he meets in Paris.

The poetry in his writing resonated in my mind, line after line. The novel filled my mind with vivid imagery, depicting both the beauty and the ugliness of love.

3. If all your senses (vision, hearing, smell, taste, touch) got taken away and you could only keep one, which one would it be? Why?

I can tell from my father’s deafness how the lack of one sense can sometimes discriminate and isolate you in your everyday life. We too often take for granted how “normally” composed the majority of us are.

Life would be at its poorest with only one sense left. I’m immensely grateful for having all of my senses functioning decently, and I’m embracing each one of them.

4. What is the worst career advice you’ve been given?

Detach yourself emotionally from what you do.

5. Which art piece of yours best represents your life?

My Tropism project series. This is the result of a personal journey and the work born from the many crises and questions that I observed and reflected on. These enlightenments, some beautiful, some less so, are all powerful and inspirational sources to me.

The first study, Consequences of a Displaced Memory, explores inner movements expressed visually through the archive pictures of my family.

The second study, Theatre of Remembrance, is a staged performance I have written and directed. It is depicted as different narratives unfolding around a table made out of several fragments that transform between each chapter.

6. Three things that instantly remind you of Vietnam?

The shouts from the staff in a Vietnamese diner, ceiling fans, and heavy rain.

You can actually find those elements in my art installation, Tropism: Here, they, us, I, there. This is a tribute to the elements reminding me of home, which also questions the meaning of homeland for a person from a diasporic group.

7. If you could have another name, what would it be?

Do I really want another name? I have struggled my entire life with it, and I have a lot of history with my name being so difficult to pronounce for Western people. But that just makes me want to wear it even more proudly.

I actually recall the exact moment when I felt in tune with myself and my name for the first time. It happened on my first journey back to Vietnam in 2016. I was traveling alone. When I passed the security check and passport control, the man pronounced my name so effortlessly that I suddenly felt reconnected to my roots.

I really can’t think of any alternative since it’s the first thing that defines you when you meet a new person. It is the core of yourself and your history.