Sanuki Daisuke Is Building Open Spaces In A Crowded City

Sanuki Daisuke Is Building Open Spaces In A Crowded City 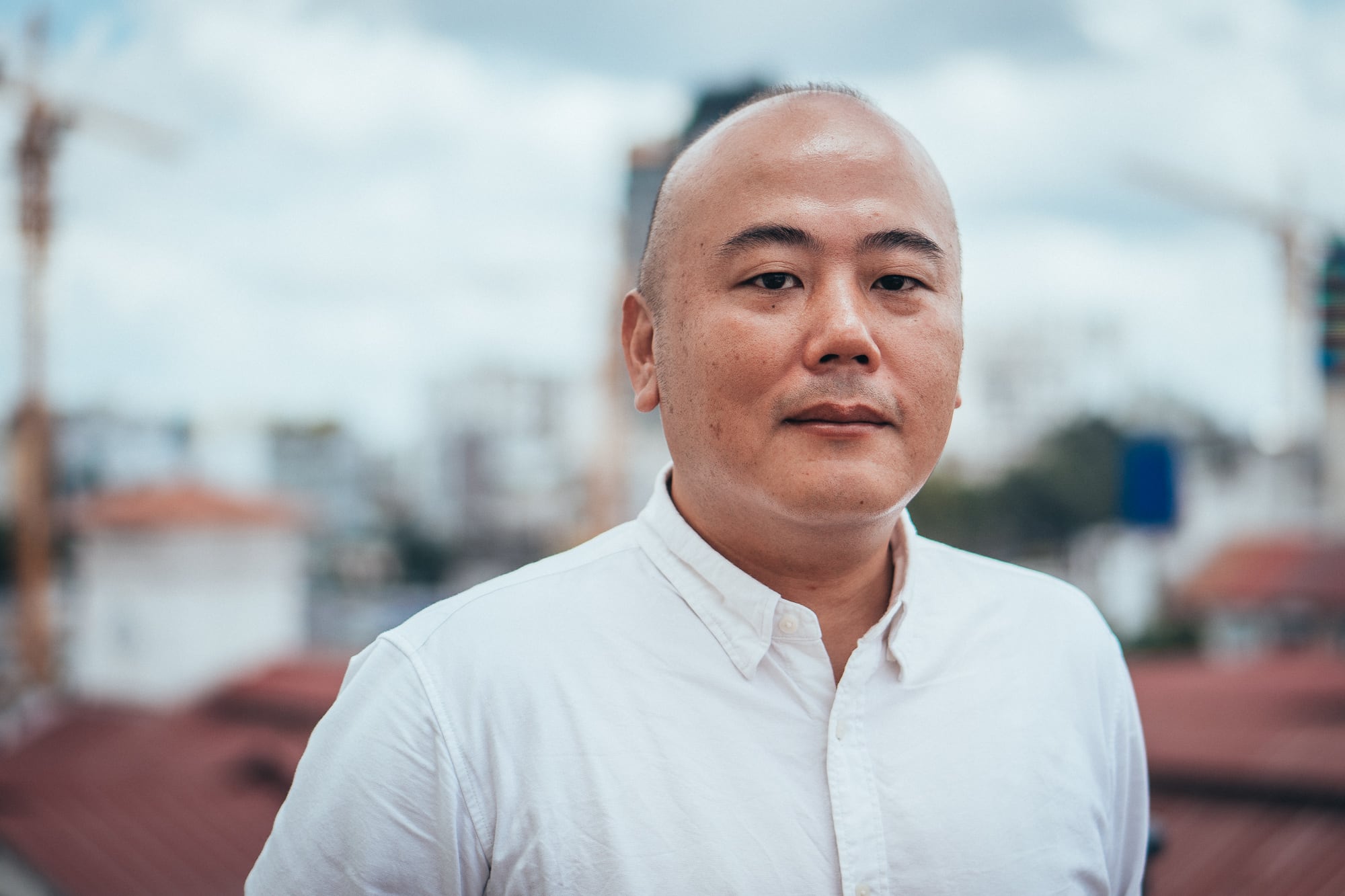 In 2009, Japanese architect Sanuki Daisuke had to make a choice. He could have found another teaching position after his four-year term had ended as assistant professor at Tokyo Science University, or he could escape from Japan’s financial crisis to work in a foreign country.

The latter was risky, but the former offered him little hope of seeing his ideas being realized in the form of buildings. He wanted to do more than create models and designs; he hoped to see his concepts become physical structures. Unlike Japan, Vietnam is abound with job opportunities for architects given the current cultural trends in design and architecture and the growing market for renovations, and engineering and construction projects. So when the director of Vo Trong Nghia (VTN) Architects, an award-winning design firm headquartered in District 3, invited him to be a partner of the company, he accepted.

The Stacking Green House in Ho Chi Minh City—characterized by “stacked” layers of tropical plants and natural lighting—was Sanuki Daisuke’s first project with VTN in Vietnam. He followed it, in 2011, with the planning and construction of the private Binh Duong School with the same architecture firm.

Then Sanuki left VTN to start his own architecture company—Sanuki Daisuke Architects (SDA). Designs by SDA typically adapt to Vietnam’s tropical climate while incorporating the country’s flora and fauna. So Vietcetera visited Sanuki Daisuke at his office in Phu Nhuan District to learn more.

From across a white table piled with sketches and foam models, Sanuki shared not only the story of his transition from academic work in Japan to realizing his designs in Vietnam, but also his hopes for future projects and the spaces that have inspired his current methods. A few days later we invited him to our office for a few photos.

How would you describe what you do?

I am the director of a small architecture firm based in Ho Chi Minh City—Sanuki Daisuke Architects. I founded the company in 2011, the same year I left VTN. Since then I have been trying to grow the firm while improving our work. Lately, I have focused on designing office buildings, homes, restaurants, and resorts.

My designs are optimized to fit the tropical Vietnamese climate. This involves creating natural air circulation, continuous pathways, and connections to the outdoors. I try my best to take advantage of large spaces and cooling winds, and also design structures which provide shade and coverage during the dry and rainy seasons. Natural greenery also plays a role in many of my designs, for example, in the “Stacking Green” project with VTN. Visible greenery on each layer of this “stacked” geometric house provides a break from the concrete and metal of the city.

But every structure I have designed has been special in its own way. Going forward, I know that Sanuki Daisuke Architects will create spaces that mimic this mentality. Each project carries with it elements of a story: struggles and successes in the design process, its location, the client’s attitude and input, the involvement of team members, and budgets. These all contribute to a work’s uniqueness.

Why did you decide to work in Vietnam? How did your relationship to this country first start?

I did not begin with a specific interest in Vietnam. But when I stopped working as an assistant professor at Tokyo Science University in 2009, I wanted to take a path that differed from other architects. There were also compelling reasons for moving abroad: the economy in Japan was suffering, and the demand for architects was extremely low at the time.

So when director Nghia of VTN Architects invited me to partner with him in the company, I accepted. It was only when I arrived that I realized how much opportunity there is in Vietnam for an architect. Unlike in a well-established city like Tokyo, there is great demand for new construction in this country. There are chances to work on important projects and the tropical climate allows for engaging, refreshing design possibilities.

Who are your architectural influences? What inspires you?

I have been inspired by Geoffrey Bawa, a well-known Sri Lankan architect who specializes in tropical design projects.

But my biggest influence was my boss and mentor at Tokyo Science University, Professor Kazuhiro Kojima. His style was unique. His designs deeply considered “invisible” elements like space, wind, light, and sound, as well as the activities of the people who would come to interact with his projects. He always kept up-to-date with cultural and social issues that would affect the outcome of his designs, and he was always looking ahead. He taught me how to think about architecture, but also how to live a full life and make the right decisions about my future. He passed away just two years ago, not long after I founded Sanuki Daisuke Architects…

I am always learning from the work of other architects in Vietnam and around the globe. I have traveled around Europe and Asia and admired the varied structures in these regions. Ancient designs are stunningly beautiful. And even so-called outdated work, like the 1966-built University of Medicine and Pharmacy in HCMC, inspires my new projects.

But simply reviewing my own designs can teach me more about how to improve my work.

…contain something that I call “heuristic discovery.” This means good design is influenced not just by the client’s desires, but also by the social and environmental features of the land. The goal is bringing the customer and the land into harmony. Such work always requires a kind of discovery process. Despite the low budgets and tight schedules in Vietnam, this process is essential.

Describe the biggest challenges you’ve faced as an architect in Vietnam.

There are quite a few challenges that architecture firms face in general; Sanuki Daisuke Architects is not immune to these. Besides the budget and time constraints I mentioned, first, there can be issues with the client. They may be overly stubborn or have unreasonable demands, or have a tendency to try to control the project. For us, there is always the possibility that a client cancels a project with SDA architects and chooses to work with another firm. There are many small architecture firms like my own in Vietnam who face the same problems.

Second, each project carries with it unique difficulties. Some projects are extremely complex and their design requires much thought on our end. And then there are projects undertaken in cramped spaces with little access to natural light—as is very common in cities like Ho Chi Minh City. Despite the adversity that comes with building in a city where buildings are either very close or attached to one another, I always say to myself: I will not give up, even if the client thinks the location is not good.

Finally, a number of projects are, frankly, not interesting to do; perhaps much of the work has already been done, or we are asked to complete only a very simple task.

Can you tell us about one of your recent projects, the Binh Thanh Apartment?

In designing the Binh Thanh Apartment, we recognized that the current apartment lifestyle in Vietnam is difficult for its lack of open space. Apartments here tend to be densely populated, uncomfortable, and designed to maximize financial efficiency rather than quality of life.

Sanuki Daisuke Architects want to realize a new form of apartment living that allows tenants to access fresh air and observe the tropical landscape of Vietnam around them. And we wish to show how, even in the middle of crowded Ho Chi Minh City, an apartment building can provide a connection with nature.

Our Binh Thanh Apartment project is an example of what an alternative living space in an urban area can look like. At our client’s request, we primarily used local materials—like terracotta for the facade. This was both cost-efficient and charming. The terracotta brick facade that surrounds the building makes it look closed-off from the outside. But once a person enters, the impression is the opposite. Spaces are open, airy, and naturally bright. And to ensure residents could maintain a connection with Vietnam’s tropical plants, we designed connected courtyards in which they visibly grow throughout the complex.

What do you dream of achieving with your architectural designs in the future?

One of every architect’s biggest dreams—to establish their own firm—has already become a reality through my creation of Sanuki Daisuke Architects.

But what I still yearn to work on are more public spaces like libraries, museums, and even public schools as opposed to private spaces such as homes and offices. An architect who designs a public space knows that his work will be seen and used by the masses, and this carries with it a special feeling. It lets you interact with people’s lives daily for as long as it exists.