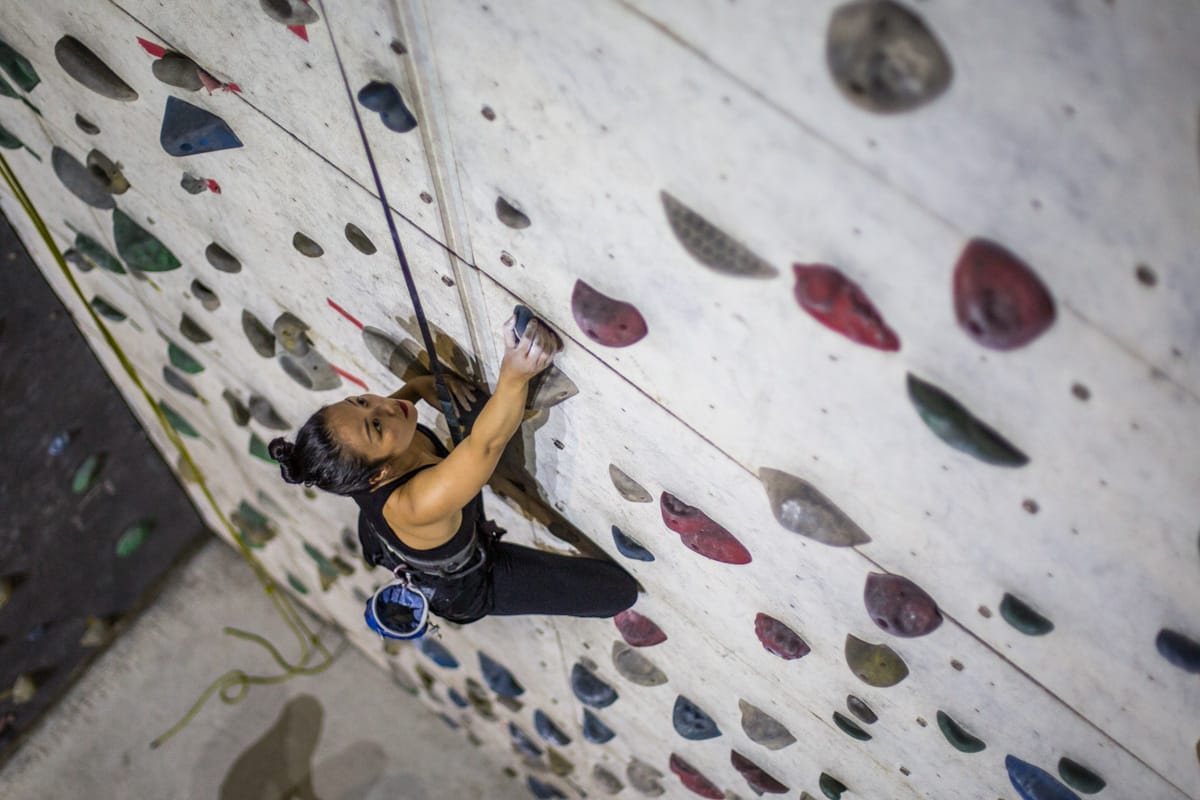 There are plenty of regular gyms in Ho Chi Minh City, but it’s harder to find somewhere to go beyond the rote ellipticals and to get some exercise outdoors. You could bicycle outside the city or join the 5 AM senior citizen crowd using the exercise equipment in the parks, but in the last few years several climbing gyms have also popped up along with a growing community of climbers throughout Vietnam.

We spoke with Ludovic Tran, a graphic designer/photographer, avid climber and the former co-owner of Decibel, to get some tips on how to get into climbing, which gyms he frequents in Ho Chi Minh City, and where he would go to climb outside a gym.

What surprised you when you first started climbing?

I thought it was just about upper-body strength but the first thing you learn is how to push up with your legs. It’s about balance, flexibility and coordination. Every time you climb you learn something new. My advice is climb with someone who knows more than you, the point is to progress. And I would start with bouldering to learn more about real technique.

Where have you been outside Ho Chi Minh City recently to climb?

Once you get into climbing it becomes so much a part of your life that you start planning your holidays around it. Recently I went to Krabi, they have something like 700 routes there. In Vietnam you can go to Cat Ba island, they have guides and gear available. I did the deep water solo climb, which was fun and they have a good diversity of bolted routes and a view of Halong Bay. I also recently went climbing in the Marseille Calanques.

What’s your advice for people who want to go on climbing trips in Vietnam?

The climbing scene outside Hanoi and Ho Chi Minh City is not as developed as Thailand or France. It can be hard for them to find and vet qualified staff so it can be a bit dodgy sometimes, you need to be careful. If there were more regulation and help for climbing outfits in Vietnam it would develop a lot faster.

Any other tips on climbing?

It’s also the psychological side of it that is really interesting and plays a big role. There is the fear of falling that can be very challenging and that you have to constantly try to overcome if you don’t want to get stuck at some point (the mind game becomes much harder in lead climbing outdoors). And then the perseverance is important, the concentration and confidence. Believing in yourself is fundamental and one of the strengths of good climbers. That’s why you’ll always see climbers cheering and supporting each other while in difficulty. I think it’s a very cool side of rock climbing. It’s always much better when you climb with friends.

Ludovic goes to three different gyms in the city to mix it up and practice different skillsets.

Where to rock climb in Ho Chi Minh City

X-Rock
X-Rock was one of the first climbing gyms in the city and has the highest wall available. It’s well-built with overhanging sections that are good for reproducing the conditions of climbing outside a gym. It’s known for being professional and good about safety standards. (All the places in the article are good about this, though). The offer both day passes and memberships. All new climbers need to take a safety and belay course to start out.

Vertical Academy
Vertical Academy is indoors and has both wall climbing and bouldering. The wall is not super high but it offers variation as far as technical difficulty goes and the routes are changed often, which keeps it challenging. They host events and competitions where you can get to know other people of all skill levels interested in climbing.

Push Climbing at Saigon Outcast
Located at Saigon Outcast, Push Climbing is a great place to put climbing with friends into practice, even if they’re just having a beer and cheering you on. It’s a high outdoor wall, and they frequently have classes, events and competitions, including speed climbing, crate stacking, Girls Got Power on Wednesdays (free for ladies) and Man Up (free for guys) on Thursdays.