Not long ago, researchers uncovered the longest archeological monument in Southeast Asia ever discovered. Spanning 127.4 kilometers and stretching south from Quang Ngai to Binh Dinh province, the Long Wall of Vietnam has potential to become one of the biggest tourist attractions in the region.

Some believe the structure was built in 1819 and was a collaborative effort between the Hre tribes and the Vietnamese population of the central highlands after Dr. Hardy, head of the Hanoi branch of École française d’Extrême-Orient (French School of Asian Studies), found reference to the structure in court documents from the reign of Emperor Dong Khanh, in 2005. His findings then sparked a search for the archeological treasure which spanned five years.

Others postulate the wall was actually built much earlier, about 500 years ago and that 1819 simply marked the date when the military first took control of the rampart. Not far from the site, researchers also uncovered ceramic artifacts dating back to the 16th century which complements the theory that the wall was indeed, built much earlier than 1819.

How was it discovered?

Although some narrative now exists accounting for the construction of the Long Wall of Vietnam, there is still much that we don’t know. According to the documents discovered by Dr. Andrew Hardy, the wall was constructed during the 19th century by the inhabitants of the central and lower highlands for military and trade purposes.

Once this document was authenticated, Dr. Hardy and archaeologist Nguyen Tien Dong of the Institute of Archaeology at the Vietnam Academy of Social Sciences led an excavation crew who, in 2010, unearthed the first segment of the Long Wall. The discovery has been heralded as Vietnam’s most significant archeological find of the past one hundred years.

History of the region

Besides the Vietnamese, inhabitants of Quang Ngai province also includes the Hre ethnic minority. In the past, the neighboring groups had a tumultuous relationship, and the wall most likely served as a mutually beneficial defensive deterrent for the two opposing forces.

The construction of the Long Wall of Vietnam has unique historical context as this was one of the few, if not the only times the soldiers of the Nguyen Dynasty, the Vietnamese and the Hre communities all collaborated in a peaceful and constructive manner for the benefit of all. 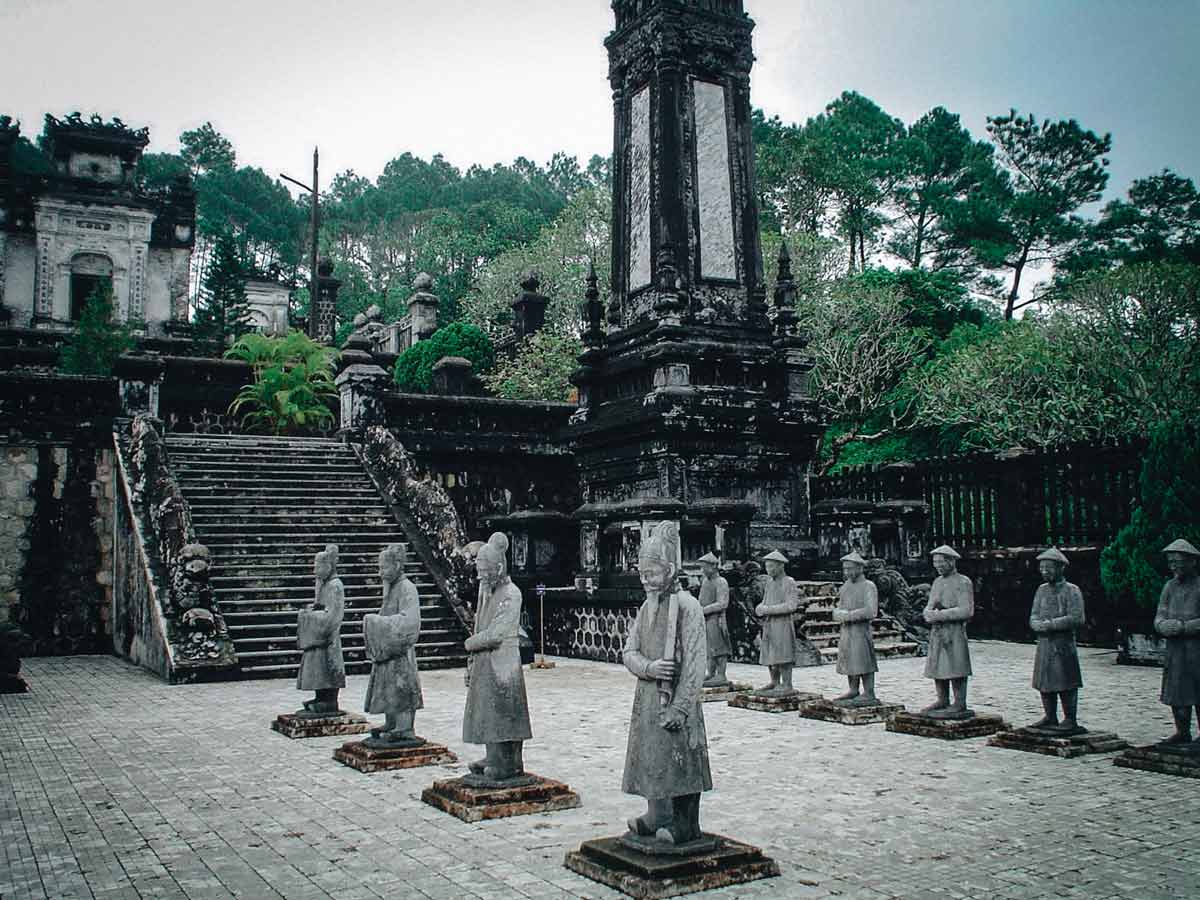 When experts began exploring the bulwark they discovered portions of it were made of earth, while other parts were constructed with stone. Given the nature of the materials used, we can safely assume that under order of the king, the Hre employed their skill of crafting rock formations, while the Vietnamese population constructed their portion of the wall using soil, grass and other natural elements—materials employed by each group when they erected structures in their own communities.

What was the wall used for?

The barrier also had an integral role in regulating trade and taxation between the groups. Along its routes, which followed pre-existing roads on each side, 115 forts were established in order to maintain order. Each fort is said to have held 15-20 guards who would collect taxes and provide military security for both sides, as well as for the Chinese traders. The Long Wall of Vietnam also served as a territorial border for each ethnic group.

Features of the wall

The structure is woven throughout dense jungle canopies, traverses the Truong Son mountain range, rivers and immense landscapes. In areas where erosion and landslides were common, the wall was constructed using large stones to prevent such catastrophes. The structure ranges in size reaching heights of up to 4 meters tall and 2.5 meters wide.

How can I visit?

Quang Ngai is not often frequented by western tourists. Keep that in mind. The area is certainly not developed yet, and it’s a good idea to organize your stay before you go, as there could be some travel restrictions. Navigating it by yourself is not suggested, unless you are a highly experienced independent trekker.

Once you get to Quang Ngai, how you explore the Long Wall of Vietnam is a bit tricky. There are no tours currently operating and as of now, only four designated visitors’ sites which are poorly signposted. So far, the majority of visitors to the wall have been researchers, and it should be known that the rugged terrain is quite difficult to navigate without a local guide. It’s steep, it’s thick and it does not have pre-established hiking trails. Proceed at your own risk.

The potential future of tourism

The Vietnamese government officially declared the long wall a National Heritage site in 2011 with hopes of eventually attaining a spot on the UNESCO World Cultural Heritage Site list. With plans to globally publicize their archeological find, the People’s Committee of Quang Ngai invested VND 15 billion in wall maintenance and upkeep.

However, there is much awareness that needs to be raised before the Long Wall of Vietnam becomes an international bucket list destination. This should, for example, include the development of education programs to help local residents understand the significance of the site, and the development of a sustainable eco-tourist infrastructure that is sensitive to the needs of the local population. 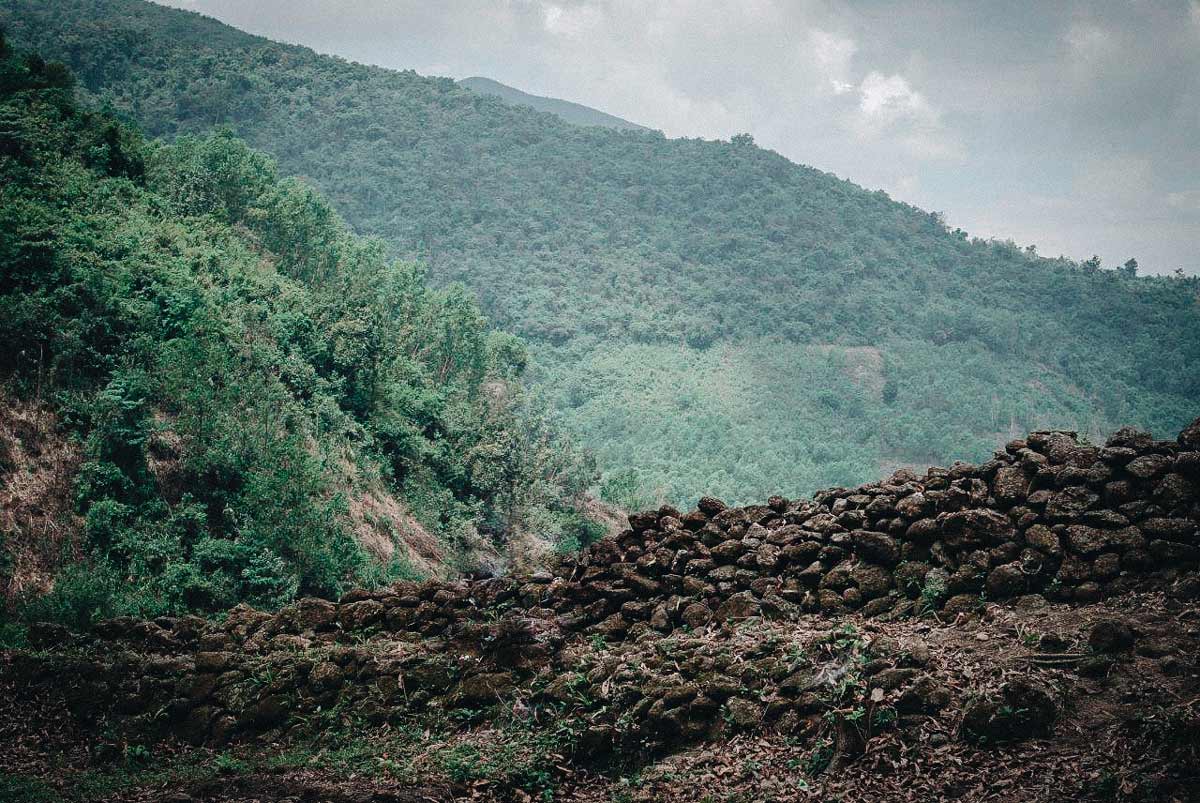 What lies ahead for the archeological site is largely up to the indigenous populations and local tourism authorities. Since the initial announcement introducing the scientists’ discoveries, little progress has been made on developing a framework to help develop the region as a marked tourist destination to date.

Quang Ngai at a glance

The region has a tear-jerking history and has been largely affected by previous warfare. As a result, it can sometimes be difficult for outsiders to get permission to visit, although restrictions appear to becoming less strict.

During the Vietnam War (or the American War), Quang Ngai was the first village to organize a militia army against any imposing force. As a whole, the province still has a very strong military presence, and is somewhat hesitant about allowing outsiders into their community, and rightfully so when we understand its history.

Quang Ngai was the location where the unspeakable war atrocity known as the My Lai Massacre occurred. During this tragic event, American troops brutally slaughtered 500 unarmed civilians including old men, women and children. Today, you can visit the My Lai Museum to pay your respects to the victims.