The Warehouse Hotel Singapore: From Spice Depot To Disco To Design Hotel | Vietcetera

The Warehouse Hotel Singapore: From Spice Depot To Disco To Design Hotel

The Warehouse Hotel Singapore’s had a colorful life. It used to be a spice depot, an opium den, and later a disco. “Some Singaporeans will tell you here’s where they met their wife or husband,” Tarun Kalra, the award-winning hotel’s general manager, laughs. Today, the 37-room “luxury boutique” hotel, built in 1885, has been called “a mood-lit bolthole dressed in rattan, exposed original brickwork, soft-hued fabrics, and low-slung furniture.”

The Warehouse Hotel Singapore, by The Lo & Behold Group which is part of the Design Hotels’ portfolio, has a conceptual cohesiveness that draws design-minded guests from around the globe—and young Singaporeans wanting a curated staycation. 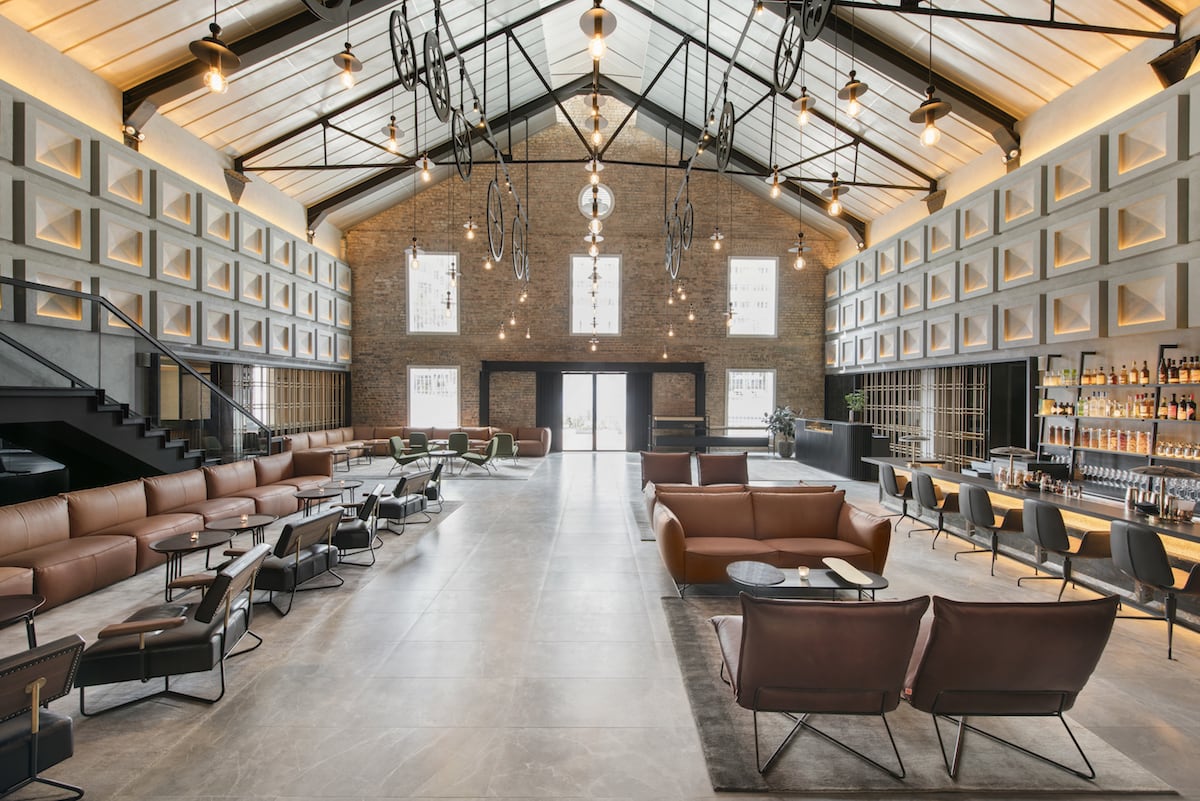 The historic Warehouse Hotel Singapore draws design-minded guests from around the globe: “The property was disused for fifteen years when the government weren’t sure what to do with the land…They finally leased it out making it clear it had to be a hotel.”

The knowing air of nostalgia and sense of place at The Warehouse Hotel is something new to hotel culture in the Lion City. And it infuses everything from the “vice minibar,” to the fortune cookies delivered to the room. The Warehouse Hotel Singapore’s cocktail menu even has three sections based on the three major eras the property has lived through—”spice trade,” “godown,” and “the warehouse disco”—and then there’s the special edition “retail installation,” the Supermama x Gabriel Tan handcuffs, pen knives, and hip flasks, in the display cases around the reception. 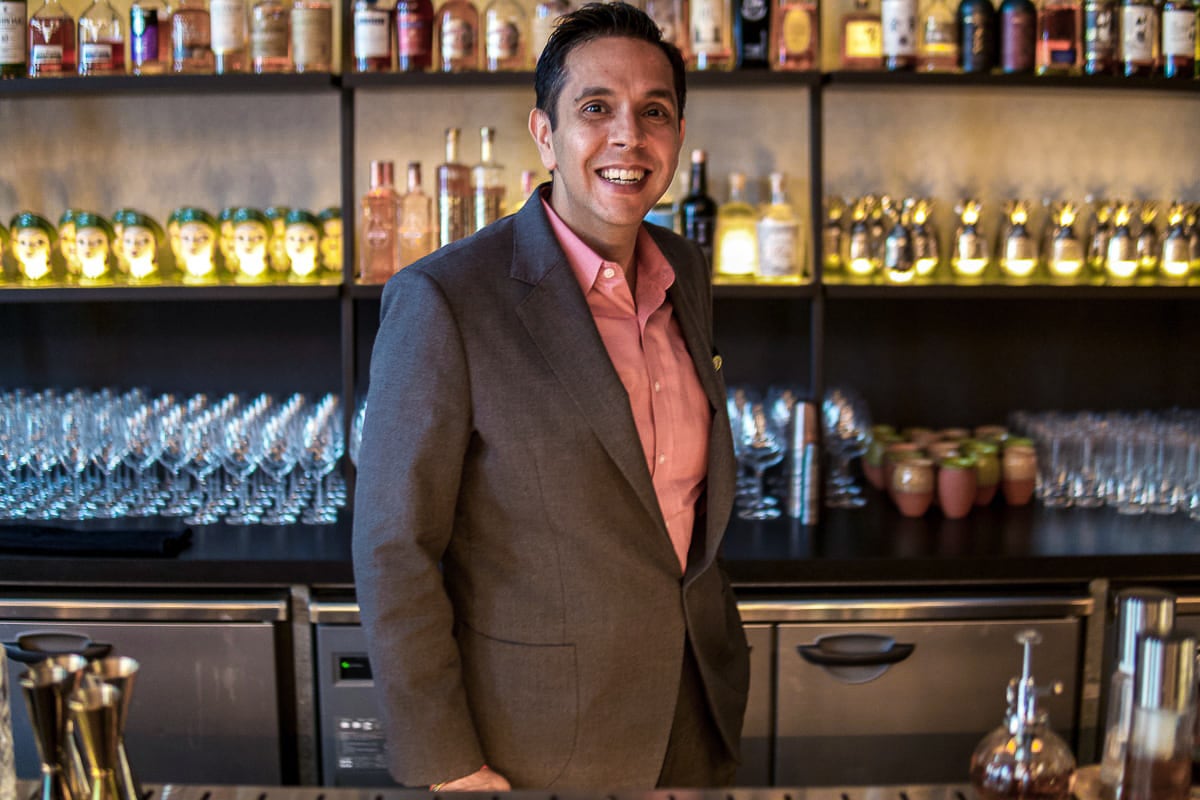 General Manager Tarun Kalra at The Warehouse Hotel Singapore’s bar where the cocktail menu has three sections based on the three major eras the property has lived through — ”spice trade,” “godown,” and “the warehouse disco.”

“The Supermama and Gabriel Tan pieces are an exclusive collection of items people would have used through the hotel’s history,” Tarun Kalra smiles from The Warehouse Hotel Singapore’s “den.” “We want to celebrate this space, but we also want to celebrate local by curating things from Singapore and the region that we want to tell the world about.”

The den, a function room and lounge, on the bank of the Singapore River is a vantage point from where the hotel’s lobby activity is visible. “I can work here, get some quiet time, but still be part of the action—I can see who’s coming in and out, and I can make sure everyone is well taken care of,” Tarun Kalra nods. Besides a homely bookcase and natural wood-topped conference desk are two photographs by Singaporean artist Robert Zhao. 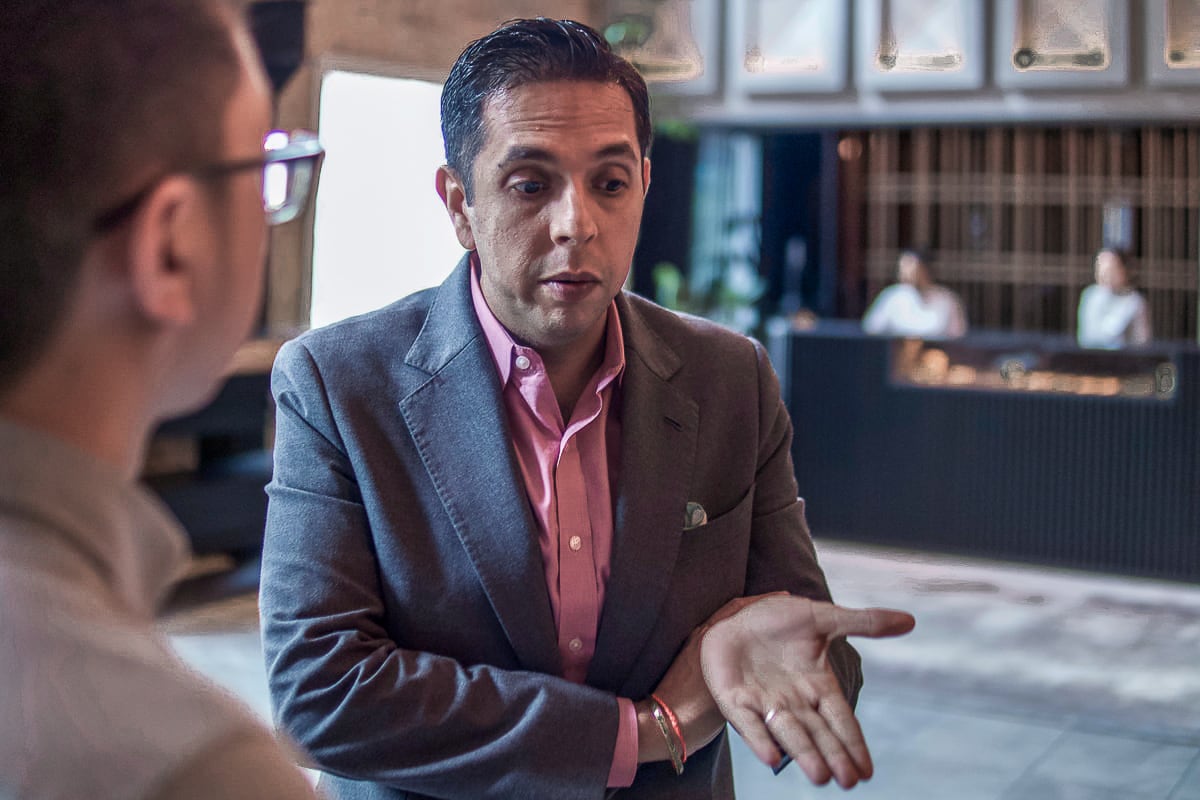 Tarun Kalra’s philosophy is servant leadership: “…we are leaders, we’ve done our time in the industry, but we still need to show the rest that we can step up and pitch in.”

There are more rich details in The Warehouse Hotel Singapore’s rooms. They include bars of Marou chocolate, Indian Thippanahalli Estate coffee roasted in Singapore, hand-blended tea by A.Muse Projects, chia seed and raw cacao clusters by Bruneus, and toiletries by Ashley and Co.—one of the rare departures from Asian products. “From the bed throws to the teas and coffee, and even putting the minibar together, it was all a lovely experience…and people appreciate these details,” the general manager explains. Lots of the objects are collected in a wooden bird basket like the ones Singaporeans would hang while taking time out. The three-tiered basket has a “vice minibar” section that includes contraceptives, a blindfold, and a peacock feather—a nod to the property’s unsavory past.

Tarun Kalra has been a part of the project almost from the beginning. “The property was disused for fifteen years when the government weren’t sure what to do with the land—whether to bring it down, do a condo, or create a hotel. They finally leased it out making it clear it had to be a hotel. It took twenty-two months to create The Warehouse Hotel Singapore,” the Delhi-born hotelier remembers. “And I joined ten months before we opened.” 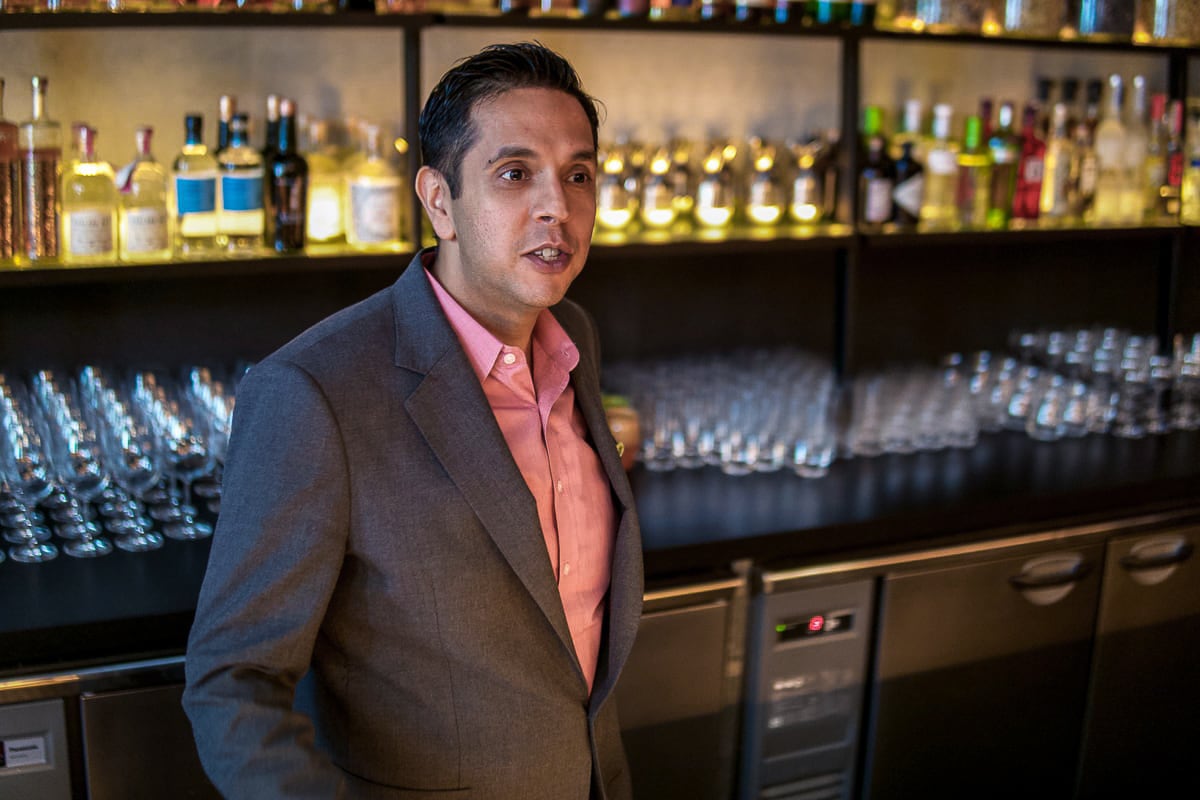 “It took twenty-two months to create The Warehouse Hotel Singapore…and I joined ten months before we opened.”

To realize the finished design they partnered with Asylum. The Singapore company take “a multi-disciplinary creative approach” to design that engages with a space and its branding…while infusing it with their quirky sense of humor. This was their first hotel. “We wanted to really stretch the boundaries,” Kalra adds.

The restaurant Po is another knowing nod to the property’s past. Its nostalgic, elevated, comfort food classics are a tribute to popos everywhere—popo means grandma in Mandarin. Inside the menu are written popo’s pearls of wisdom like “Don’t put off until tomorrow what you can eat today.” It was created with Wild Rocket’s lawyer-turned-chef, Willin Low, who first coined the phrase “mod Sin”—a term that refers to modern Singaporean food and elevated hawker dishes. 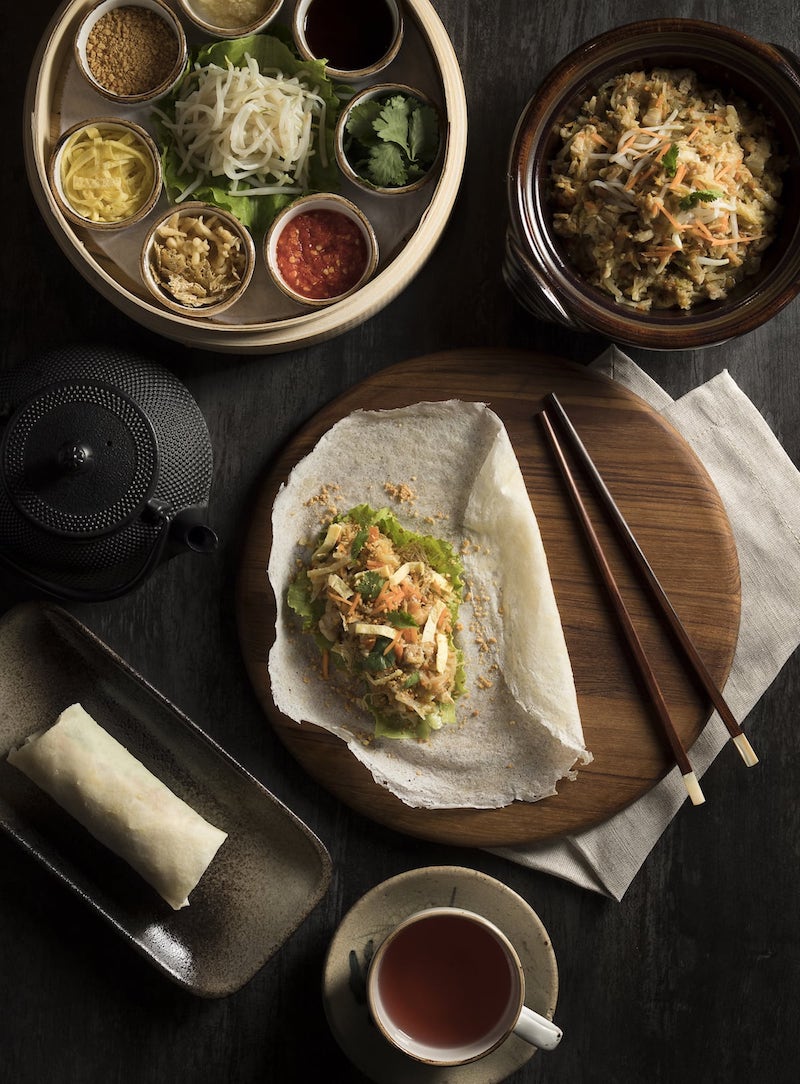 Restaurant Po is another knowing nod to the property’s past and this is its signature dish “popiah.”

“Popiah is a Singaporean dish that’s not celebrated enough. It’s a staple during Chinese New Year—grandmothers would make the filling, and you put it together the way you like it. We used one of our owner’s grandmother’s recipes—everything is handmade, nothing is bought from outside,” the general manager explains. “When I travel I want people to take me to a restaurant like Po that’s really celebrating local stuff.”

Supporting the modern-industrial design and the conceptual cohesion found everywhere from the menu to the reception area is a “lateral service” philosophy. The team defiantly blur the lines of designations. And that includes the general manager.

“My term for it is servant leadership—we are leaders, we’ve done our time in the industry, but we still need to show the rest that we can step up and pitch in,” he nods. That service-industry work ethic is encoded in their PASSION— “personalize and connect, anticipate, smile, surpass expectations, inspire, own it…and never forget to have fun,” the hotel’s general manager recites confidently. 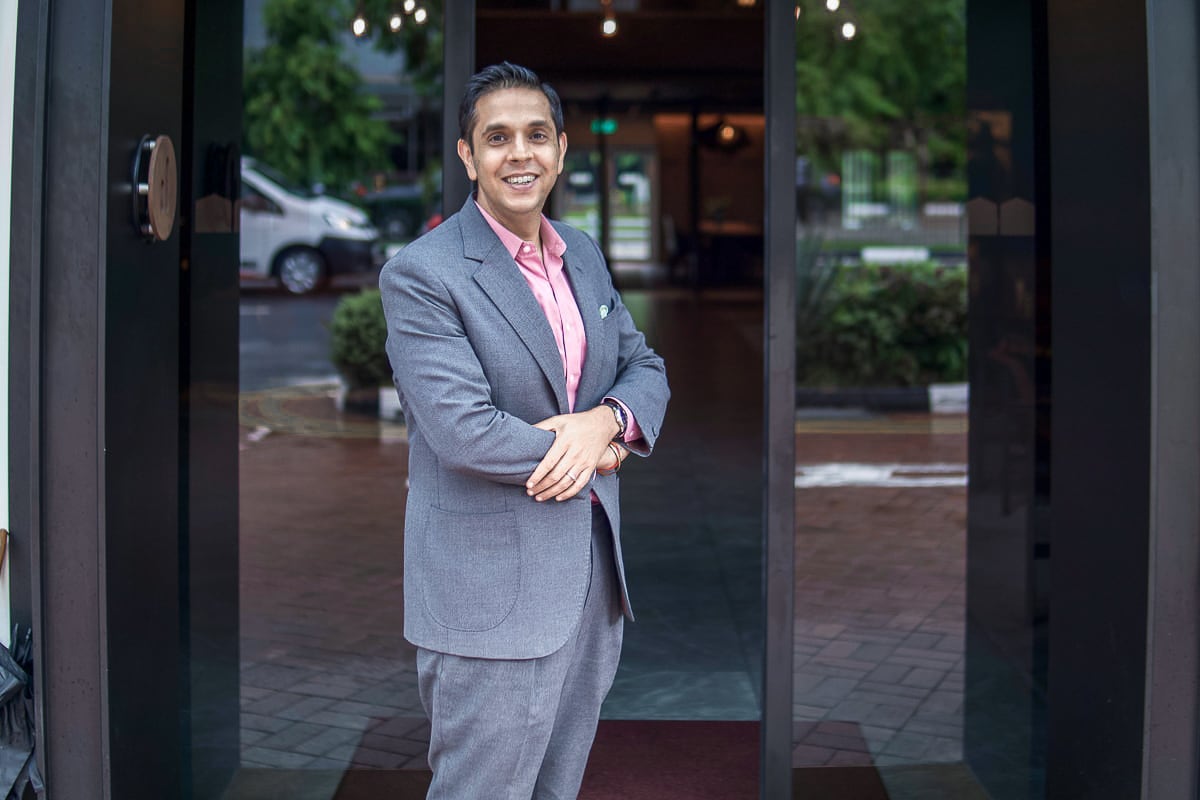 The Singapore Tourism Board have given The Warehouse Hotel their “Best Hotel Experience” award. “That was the icing on the cake that happened about a month-and-a-half ago,” Karla smiles.

The Warehouse Hotel energizes their code with a daily nudge—an email delivered at 6am every morning to all the staff that focuses on one letter of the code. “When we talk about smiling, for example, we talk about smiling on the phone—people can hear a smile—we talk about how a guest had the greatest smile ever, or how a baby smiles…everything about a smile,” Tarun Kalra explains.

The daily newsletter also has some hotel performance information, and one frequently asked question—like which is the best place for chicken rice, or Mexican food. “And which is the best Mexican restaurant? Right now, it’s probably Super Loco on Robertson’s Quay,” he replies assuredly. 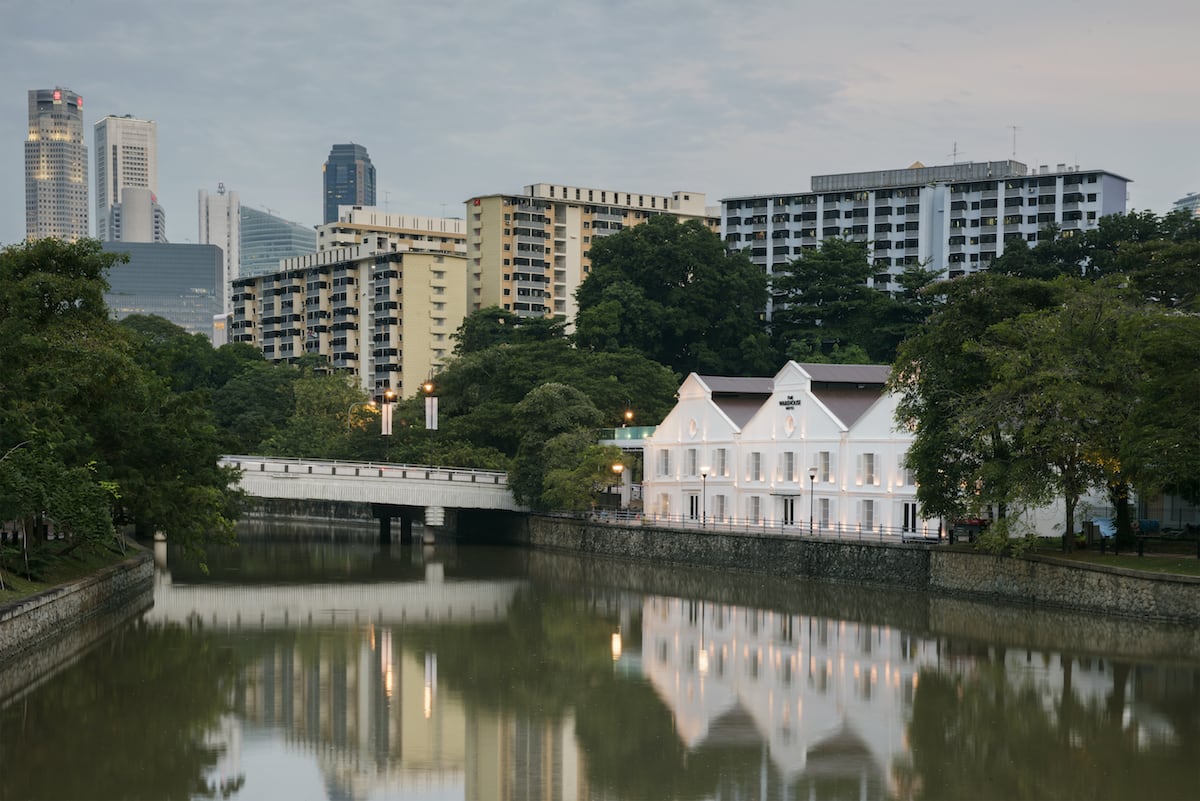 The Warehouse Hotel Singapore has had a colorful life. It used to be a spice depot, an opium den, and later a disco.

Because of all that, The Warehouse Hotel Singapore, in the year-and-a-half since opening, has already won awards. Besides name checks in the Conde Nast Traveller Hot List 2018, and Travel + Leisure’s Best New Hotels in the World lists, AHEAD Asia, which are awards organized by Sleeper, declared them Hotel of the Year for Asia,” and the Singapore Tourism Board gave them Best Hotel Experience. “That was the icing on the cake that happened about a month-and-a-half ago. And that’s competing against the big boys,” Karla smiles contentedly. “It’s all about talking about these passions, and celebrating them.”

Like your popo might have said, “In life, you are either hamster or gangster.” Staying at The Warehouse Hotel Singapore definitely makes you the latter.