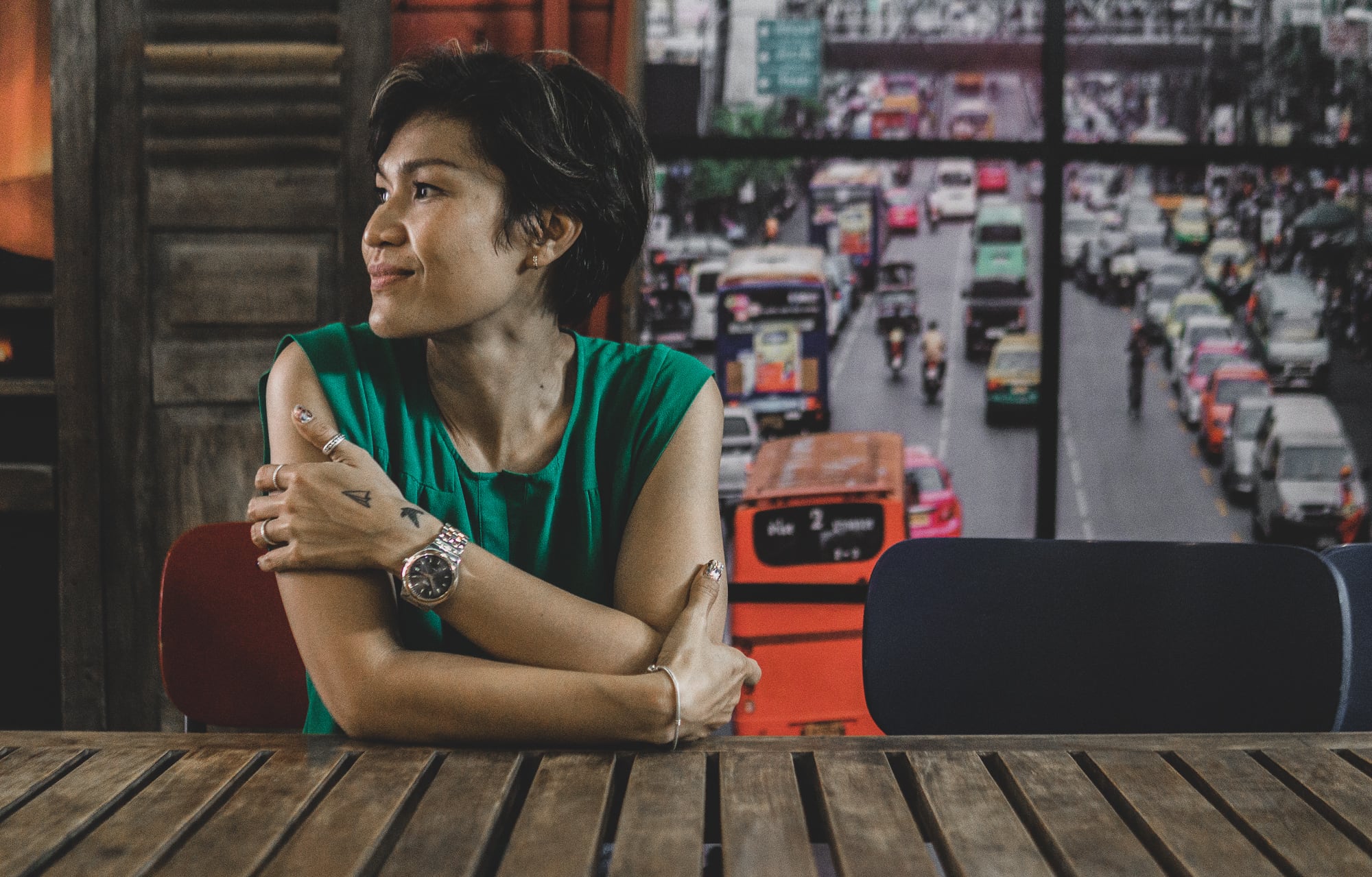 “Okay,” Thai Street’s co-owner Sana Sridamrong admits, “our one-chilli ranking is probably equal to every other restaurant’s two or three chilis!” Sana is from the north-eastern Thai province of Isaan—a region famous for its “pungent sauces and spicy chilies.” As we test a fiery new dish on Thai Street’s “must try” specials menu, Sana’s khua kling made with stir-fried pork in chilli paste and fresh turmeric, she reminds us that because the dishes are freshly prepared they can adjust the heat to suit the customer’s preferences. “But I will only go so far,” she says sternly, “using too few chilis in some dishes ruins the balance between salt and spice—a key to Thai flavor—so I suggest you try something else in that case.”

Like the people of Issan, who have traditionally left Thailand’s largest but also one of its historically most underdeveloped regions for the big city, Thai Street has led an itinerant life—opening in an alley of District 2’s Thao Dien, then a second location above Tomatito on Calmette Street, before deciding to focus their energies on this newly opened space besides Snap Cafe on Tran Ngoc Dien.

Happily, the kitschy Thai decor remains. There’s an air-con room styled like a Bangkok metro carriage. There are images of a tuk-tuk and some go-go dancers. And there are windows that appear to look down on traffic-clogged Bangkok roads. Plus, there are murals like the tribute to the Thai King who passed away last year by Thai graffiti aritsts, Wisit Ngamboonta and Pasanakul Karapim.

So, before we’re overwhelmed by the heat from the khua kling we quickly ask Sana about her culinary induction at her sprawling family home in Isaan, how the Thai Street collaboration began, and what are the key ingredients to Thai Street’s “colorfully authentic Thai experience.”

Isaan, where you’re from, is well-known for its cuisine. When did you first start cooking and how ingrained was it in your culture growing up?

I grew up with my extended family. We all lived in the same compound—altogether there were five families with lots of aunties and cousins. We had chickens, cows, buffalos; it’s a rice farming region, but we would also produce silk and do other small industries.

My routine as a girl was to help cook starting with washing and preparing ingredients—entry level stuff. The chef, my grandma, would demand the ingredients and I’d have to go into the garden and pick them. Then I’d mix them, carefully following her instructions.

How did the Thai Street project start? How is it different from other Thai restaurants in Vietnam?

It began exactly six years ago…with a home cooking session. Our co-owner, Dan Salter, planned to open a Thai restaurant but he was looking for someone to collaborate with—someone he really clicked with. I went over and cooked tom yam kung and papaya salad and he made a surprisingly good pad see yew, and it started from there. The initial idea was to save money on a ticket to Thailand—and bring Thailand here instead. I’m not a chef who presents food in a fine-dining style in pristine air-conditioned rooms. I prefer casual eating, cooking for friends and having a good time, and we’ve created that atmosphere at Thai Street.

It seems everyone knows Thai green curry and pad thai. But which Thai dish do you think deserves more attention?

Definitely laab. The dish is often regarded as a Laos food, but it’s popular in Isaan too—maybe because of lots of Isaan people can trace their heritage back to Laos. We traditionally make it with minced meat, usually BBQ beef, chicken breast or pork, which is flavored with fish sauce and lime, and we add mint and dried chili to it. It’s very fragrant.

But it’s always surprising to me to see more and more unusual Thai dishes even being served in Saigon. I was amazed to find that Racha Room serve son-in-law eggs. They’re boiled eggs with tamarind and palm sugar. So simple. One story behind the name goes that a son’s mother-in-law cooked the eggs for him as a threat because he was mistreating her daughter—suggesting his “eggs” would be the next to boil.

Vietnamese food is regarded as salty in the north, spicy in the central region, and sweet in the south. How does Thai food compare by region?

The north and north-east of Thailand are similar. There’s more dried chili than fresh chili and ingredients like pickled fish. In central Thailand, dishes are more sour, less spicy, and you find that there’s more coconut milk used. Then in the south you have the influence of places like Malaysia and Indonesia and so there’s more turmeric and middle-eastern spices, dishes like massaman.

Tell us more about your philosophy of tempering the taste of Thai food for foreign palates.

One of my favorite dishes that we serve here is som tum lao—a spicy green papaya salad. The recipe requires at least seven chilis. On one occasion, a customer came and asked me to make it with two chilis. I think in that case, order something else—I might stretch to four chilis but no fewer…

Personally, I don’t think it’s possible to serve Isaan food outside of the region. The taste is so distinct, restaurateurs change and mellow it to suit their customers which means it isn’t authentic any more. Before Thai Street, for my fix of the most authentic Thai food I could get, I would go to Thai’s House in Tan Binh.

How do you feel Vietnamese cuisine compares to Thai food? And which are your spots in District 2 to eat Vietnamese?

Some Vietnamese noodle dishes, like bun bo hue, remind me of my food growing up—perhaps because of the fermented fish sauce. I eat pho often, Hanoi-style, but I take along my own spices to add in…

Related Content:
[Article] All Fired Up With Saigon’s Chef Of The Year Julien Perraudin
[Article] Saigon Guide: Where To Work, Eat, Drink, And See Art In The City