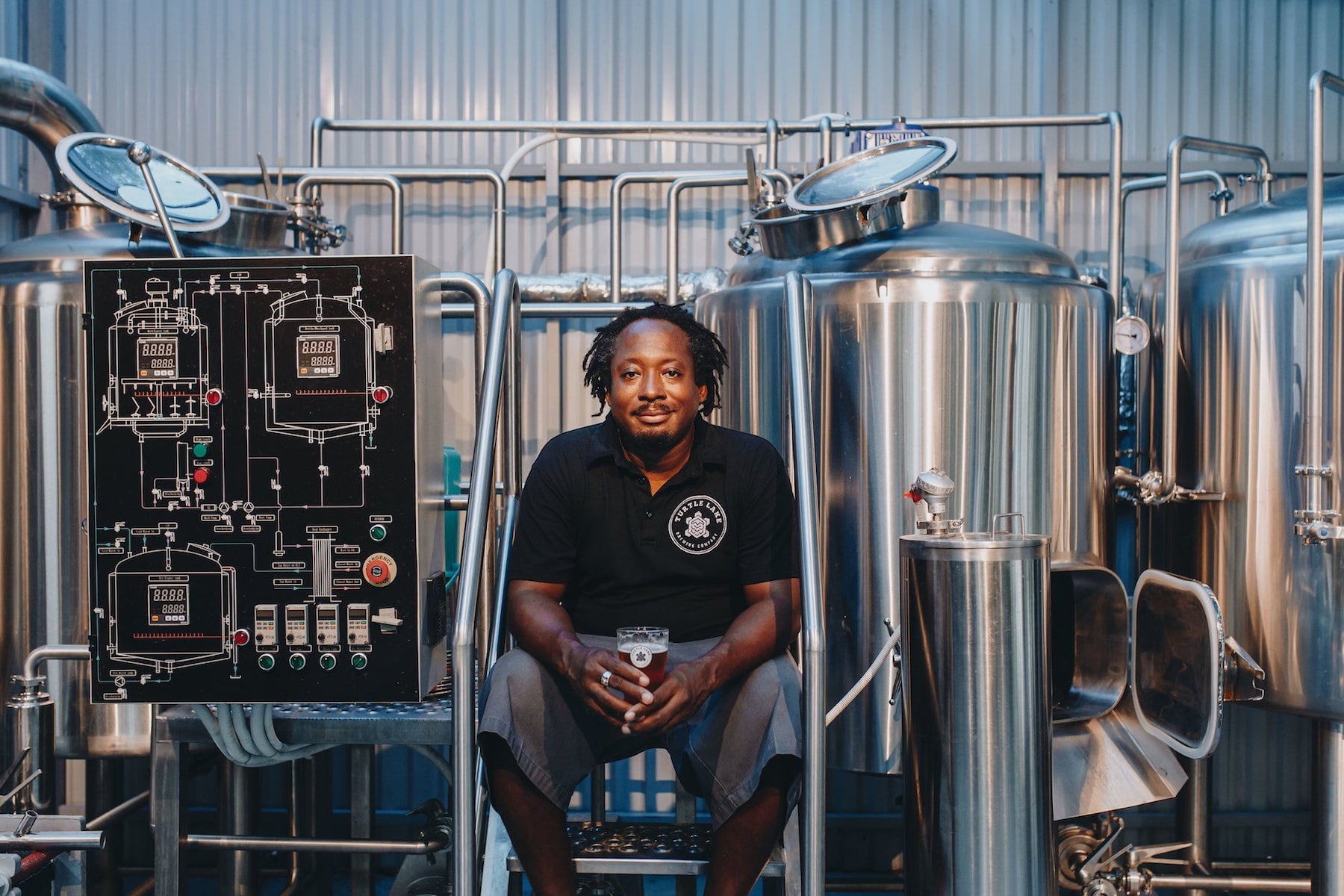 According to SEA Brew, there were an estimated 31 new craft beer breweries in Vietnam as of early 2018. As the scene continues to expand, Saigon Craft Beer Tours and Craft Beer Tours of Hanoi are already giving guided tours—evidence of the local and international interest in the industry.

As the Vietnam craft beer industry continues to grow, collaboration is becoming core to its success. We reached out to one of the most genuinely collaborative breweries on the scene—Hanoi-based Turtle Lake Brewing Co.—to learn more about how working together could be key to lifting up the industry nationwide.

In order to shed light on the subject we spoke with co-owner Lamont Wynn to learn about Turtle Lake’s part in creating more collaboration within Vietnam craft beer scene, and his hopes for building a stronger bridge between all of Vietnam’s breweries. Plus, we wanted to take down a few cold ones at one of the country’s most up-and-coming brewhouses.

Tell us about the concept behind Turtle Lake Brewing Co.

The name “Turtle Lake” is our way of showing appreciation for Hanoi. We chose to call ourselves Turtle Lake Brewery as it refers to Hoan Kiem lake and the ancient tale of the turtle and the sword. It’s our homage to the welcoming city that has given us so much—beautiful friendships, a home, and a platform to start a business. We wouldn’t have been able to open anything like this back in America, so Vietnam has also given us our livelihood.

What inspired you to start this Vietnam craft beer brand?

One of my friends was homebrewing in Zhuhai, China. He came to Vietnam with his beers and a light bulb went on in my head. Next, I visited my friend Harry Callaghan in Jinan, China and found some local cowboy breweries. They were kind enough to consult with us on where to source proper brewing equipment. After we had that in place we found some investors and that was the beginning.

What separates your brand from other Vietnam craft beer brands?

We want to do something different. Our goal is to become a destination spot for Vietnam craft beer. We are also one of the few foreign-owned breweries in Hanoi.

One advantage we have is the lakes. We have one to the left and one in front. We have a 750-square-meter space and our brewhouse can seat about 250 people. Since we brew on-site, we used tempered glass for the walls so people can drink beer as they watch it being brewed when they’re not taking in the views of the lakes.

Were pushing live acts too, and we also double as an event and social space. Many people rent the space for group parties or any kind of event.

We know you’ve been brewing for a while already. Which beer has been the most successful so far?

Our Vietnamese Pale Ale was the most popular in the beginning. It was created to bridge eastern and western taste profiles. Although the locals are already familiar with lagers and pilsners we wanted something with a bit more bite. So, we opted for a hoppy lager with a clean finish. We think of it as premium bia hoi beer. You can drink it all day.

These days the Big Boy Imperial Stout is doing really well. It has 9.6 ABV and has 58 IBUs. It’s brewed with chocolate, macadamia nuts, and toasted vanilla.

Our Double Edge Sword IPA is another favorite. We used Simcoe and Amarillo hops to give it a citrusy, tropical fruit aroma. It has 8% ABV and 60 IBUs. Then there’s the Mango Smoothie IPA. We use fresh mango pulp and vanilla to give it sweet lingering notes.

What’s your opinion on collaborative brewing?

Collaboration is fundamental to the success of most modern-day businesses. This is particularly true for Vietnam’s craft beer scene. We’re always rotating guests taps from other local brewers because it’s a great way to lift each other up. We will do the same with our food menu by inviting guest chefs. Not only does it help us to compete, but it strengthens the community as a whole.

We aim to become a full-on collective, and to be the jumping off point for more collaboration in Hanoi. I want companies like Bia Hanoi to come to me and talk shop. I view it as strength in numbers. Sure silly rivalries exist, but I just want good beer for everyone.

What do you think the Vietnam craft beer scene will look like in ten years?

Look at the brewers in Ho Chi Minh City. Vietnam is going to be a destination spot for craft beer. There’s already a handful of tour guides operating craft beer tours. However, I feel like It’s time for the capital city to rise up and get some recognition. If we can unite both ends of the country, nothing can stop the Vietnam craft beer scene.

There are lots of highly-skilled Vietnamese brewers but they are sitting quietly in the background…they shouldn’t be. For example, our assistant brewer is Lan Anh. This woman is only 23 years old but she is turning heads already. She started out with 7 Bridges in Danang before joining us and has lots of ideas. She’s all about experimentation—she’s constantly tinkering with the balance of hops and malts in ways I’ve never seen.

Tuan Nguyen from Thơm Brewery. I’m a huge fan of his Dante’s Inferno. It’s a beautifully articulated take on a Belgian Quadrupel. His beers are undoubtedly consistent, and the local community has really gravitated towards his unique styles of Vietnamese craft beer.