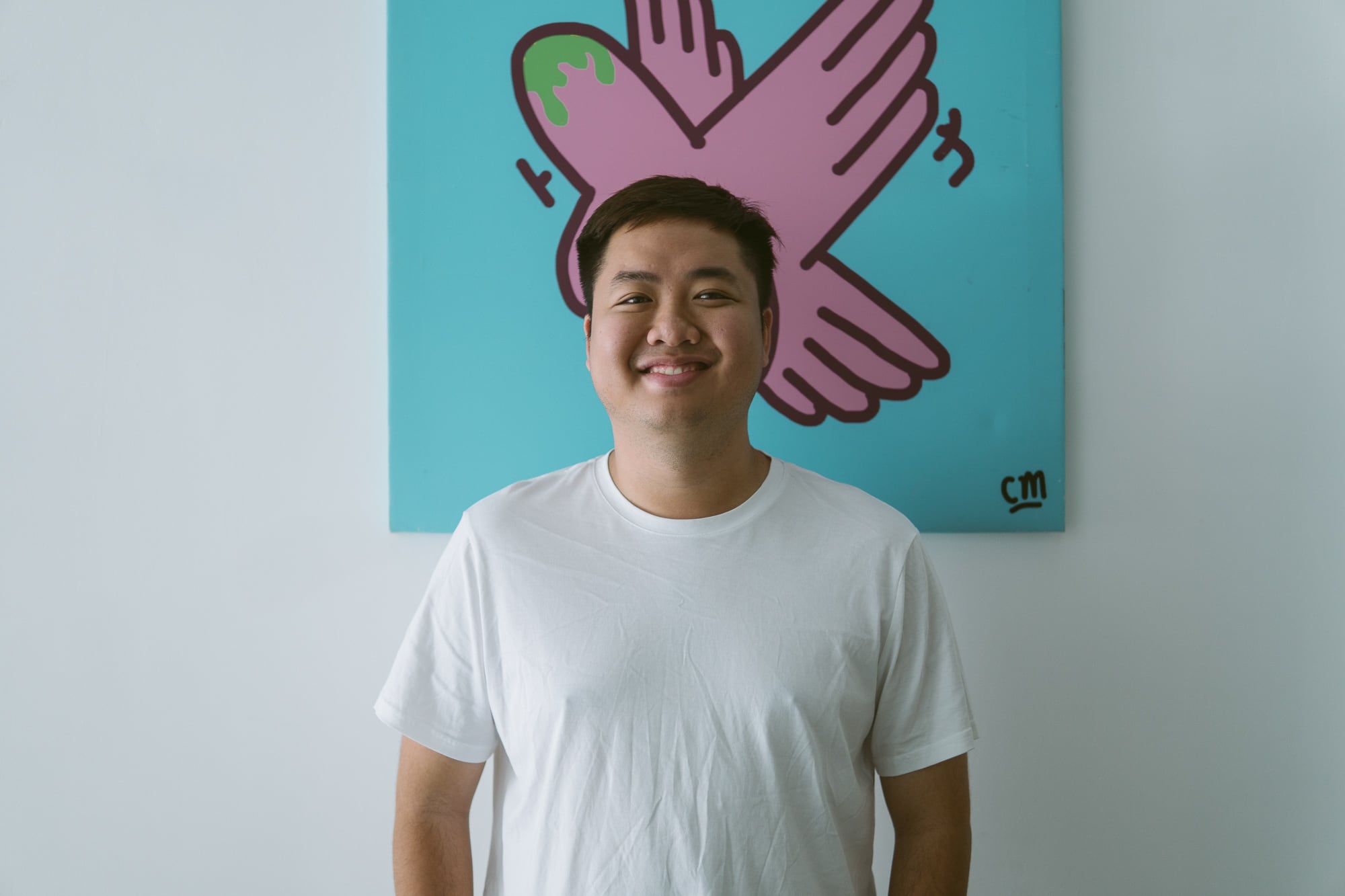 Vietnamese digital artist and video whiz Le Thanh Tung is also known as Crazy Monkey. Part of his job is to program and mix—in real time—visual graphics with live music in settings that include nightclubs, concerts, and corporate events for companies like Audi, Aquafina, OPPO, and Nokia. He is also the founder of TheBoxCollective, a creative design, production, and operation agency that specializes in cutting-edge visual experiences and performances.

Tung specialized in computer graphics at FPT Hanoi and studied fine art—with a focus on painting—at Hanoi College of Arts. Now based in Ho Chi Minh City, Tung has served as art director for campaigns and corporate events while simultaneously working on his independent pieces.

He recently returned from the London Design Biennale where he represented Vietnam—one of forty-five countries involved—alongside two other artists. The event, held at London’s Somerset House, boasted a guest list with some of the world’s most exciting designers, innovators, and curators.

From video pieces programed alongside music tracks to 3D prints and scans, this Vietnamese digital artist employs a unique blend of high-tech tools and traditional aesthetics. To learn more about his most innovative video work, Vietcetera sat down with Crazy Monkey and asked him about his current projects in 3D printing and his plans to use virtual reality technology in future artistic endeavors.

You call yourself a video jockey. How does this kind of art translate visually, and how do you put together video pieces?

Video jockeys are the DJs of the music video scene. We put together strings of visual graphics in real time which correspond to an audio track. Many of my pieces sit on the boundary between video installation and interactive art exhibition.

One example is my collaboration with music producer and composer Tri Minh. Minh was responsible for creating the audio track that would play alongside my visuals. In this real-time interactive video and projection mapping, we explore through sight and sound how modern technology has blurred the line between reality and the virtual world.

Before I begin any project, I first need to listen to the artist’s music. I try to extract the main emotions and messages from the audio. Only then can I start preparing the visuals. In the past, I used mostly computer-generated graphics, but recently I’ve started including more video footage. One of my favorite aspects to this work is how I can take visual elements from daily life and present them in strange, unfamiliar ways.

In addition to doing real-time and presentational work, you have also created music videos. Could you tell us about the recent video you made with Annam?

In the video for Annam’s song “Cau Vang Phu Quy”, I paired strange, undulating dancer visuals with the artist’s surreal instrumentals. The dancers in the video, which are graphically altered to appear pixelated and dreamlike, were captured and recorded in real time with my Kinect camera. I took depth information from the sensor of the camera and turned the dancers into three-dimensional animations.

Annam’s music really inspired me to embrace strange, exciting visual effects. The blend of tradition and modernity captured by this song reminded me of my own work. I strive to create art that weaves the Vietnamese cultural tradition into high-tech mediums.

Another tool you’ve used as Crazy Monkey is 3D printing. How have you leveraged 3D printing technology to create art, and how do you see its future as an artistic medium?

I have used both 3D scanning and printing in my past art exhibitions. For example, in my installation piece, “Ownership.Zero”, I displayed objects in three forms: as a flat image on an LED screen, as a hologram projection, and as a real 3D-printed object.

I’ve heard people say that this technology is still too young—that it lacks the precision and texture you can get when using more traditional mediums. Nonetheless, I believe that as time goes on, this technology will become refined. Eventually, digital artists will be able to paint as easily in 3D as they can with a paintbrush and paper.

Every kind of medium has advantages and disadvantages. The advantage with Tilt Brush is that you can work in a virtual space. You aren’t limited to a flat surface, and this means you can do a lot more. You can take the idea your head and draw it in a 3D space. This allows digital artists to physically walk inside their drawing and view it from multiple angles. It’s like a digital sculpture.

I see no limits to what artists will be able to accomplish using 3D technologies. The only limits are the restrictions we impose on our own thinking no matter what technology we have access to. Because 3D printing is brand new, we are still waiting to see creators take full advantage of its potential.

Your website has a dedicated section for virtual reality (VR) projects. What kind of role do you see VR playing in your work going forward?

One of my primary future goals as a Vietnamese digital artist is to incorporate more VR technology into my work. Other artists are already beginning to pioneer this artistic tool, and there are examples of VR use in art and entertainment at music festivals like Coachella.

One artist who calls himself Android Jones recently came out with software called Microdose VR. His tool allows artists to draw in a 3D virtual reality space while music plays. This technology is already being used in some of America’s biggest music festivals like Coachella and Panorama NYC. Microdose hasn’t made it to Vietnam yet, though, and the software is not yet available for purchase.

My hope is that as advanced software becomes accessible to artists around the world, I can collaborate with musicians and composers to create VR pieces that give audiences a completely new experience. Virtual reality isn’t just for video games. It can be used to present visual works to people in a novel way as conceived by artists and creatives.

How do you see VR technology being used by other Vietnamese digital artists?

Many Vietnamese people were already using platforms like Unity and Unreal when virtual reality hit the market. For those people who haven’t heard of these programs, Unity is a video game development platform that has been available for a fairly long time now. Unreal is another free game engine.

They’re both very popular here, and this reflects the enormity of the Vietnamese gaming market. Video game software is in high demand, so designers and programmers quickly learned to incorporate these technologies into their products. Today, using Unity to create art with VR capabilities is quite common.

That said, I hope Vietnamese digital artists will start to use VR technology to produce artistic experiences for native audiences. If we can manage to utilize this tool in a genre outside video game creation it would be incredible.

You mention gaming companies and architects as two groups that have adopted VR technology in their work. Do you see other visual artists in Vietnam using VR in their projects?

Virtual reality technology is still very new, so many older artists aren’t familiar with it. Right now, I believe I am one of only two artists pioneering VR technology in our field.

It’s a difficult tool to integrate into your art as basic knowledge of computer science and graphics is a must. Many Vietnamese digital artists lack the technical expertise to use VR effectively. Fortunately, my background in both computer graphics and fine art allow me to leverage the latest technology in my work.

Most artists in Vietnam are still not familiar with integrating computers into fine art. Many artists prefer traditional mediums like painting or sculpture.

It is only very recently that universities here have begun to teach how computers can play a role in creating art. In fact, Hoa Sen University in Ho Chi Minh City just started offering VR courses this year. But schools are starting to pick up on the importance of technical skills in creating meaningful artwork. RMIT Vietnam also just opened a Mixed Reality Studio where students can research and develop VR and augmented reality projects.

Why do you think VR technology is not yet as popular in Vietnam as it could be?

The biggest barrier to the widespread use of VR technology is cost. The price of a good VR headset is about US $600—so it is a significant investment.

I don’t think VR can become popular until it is easier for people to purchase these headsets.

Once they do, the possibilities will be endless. Watching a movie in VR is an incredibly immersive experience, and playing a video game in VR is unlike anything you can do with a regular computer screen. The technology is there…it’s just too expensive at the moment.