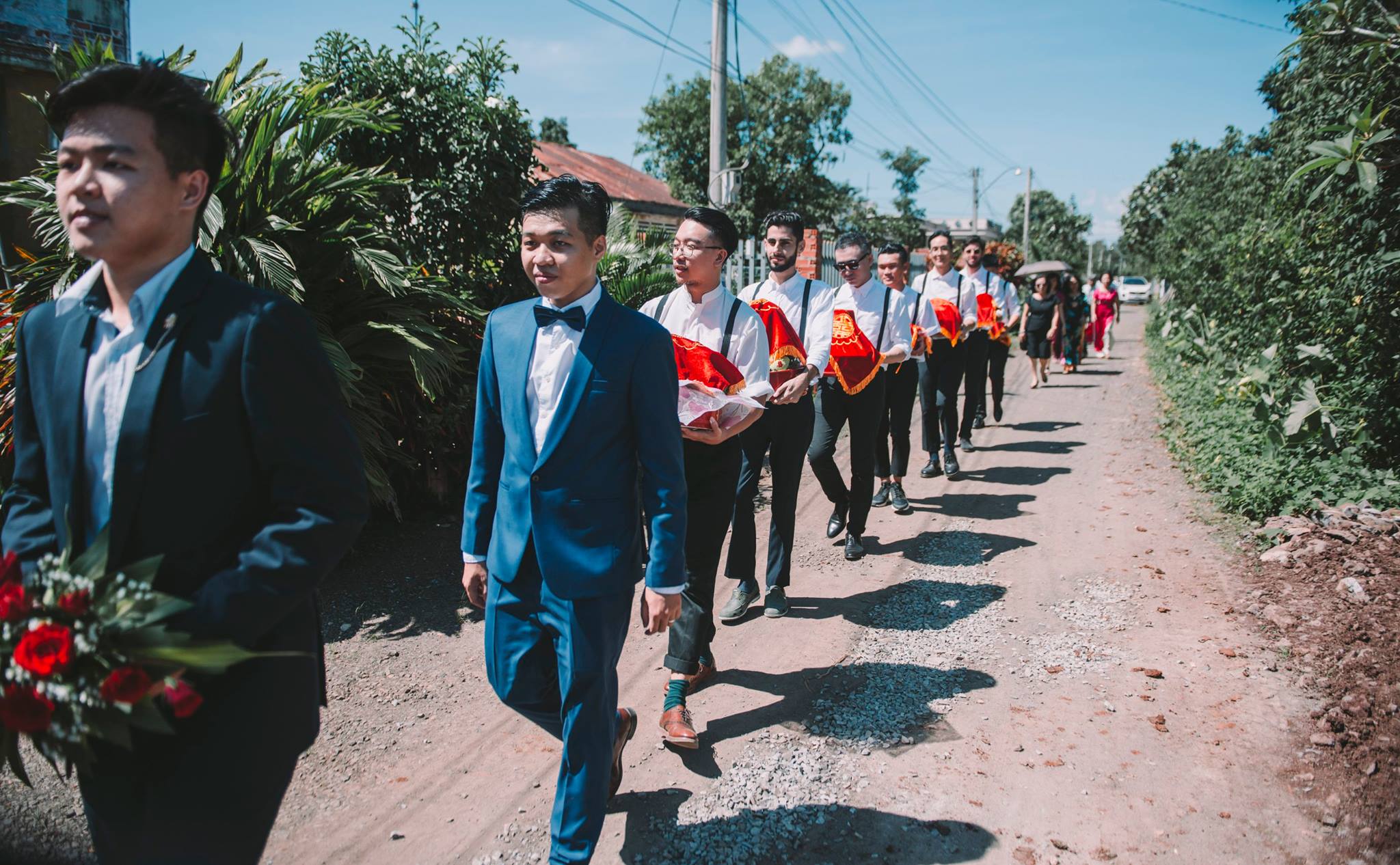 If you’ve lived in Vietnam for more than six months, it’s likely that you’ve been invited to a wedding. So far I’ve been to five. And as far as I can tell, Vietnamese weddings are a unique amalgamation of customs, cultures and individual imagination. For a first-timer, it can be hard to know exactly what to expect or do.

A Vietnam wedding is one of the best places to experience the juxtaposition between the new and old Vietnam. It perfectly illustrates just how rapidly this country has transformed since the generation that is getting married now was born in Vietnam’s emergent years. It’s not unusual, for starters, for the bride to change four times between Western dresses and Vietnamese ao dai during just one event. Some wedding traditions in Vietnam will follow an exact template. Some will be almost entirely like a Western (Christian) wedding. Most wedding customs in Vietnam will be somewhere in between depending on the bride, groom and their families.

So here are some basic guidelines for beginners, gleaned from experience and consulting my now-expert married friends.

There are usually two distinct events in a Vietnamese wedding: one in the hometown of the bride and one in the hometown of the groom (Hanoi or Saigon, in the case of my friends). In the bride’s hometown, the purpose of the ceremony is a mostly symbolic gesture of reaffirming permission from the bride’s family and “taking” her back to the groom’s house. In the groom’s hometown, it’s usually a big banquet dinner with less formal ceremony.

Most of the time you’ll be invited to the big banquet dinner version. Here’s the general order of events: as people arrive the bride and groom are usually waiting at the entrance to take photos. Wear your best, obviously. (I once made the very ignorant mistake of assuming I’d be something of a bystander at a friend’s cousin’s wedding. I was traveling super light so I wore a casual dress and was totally embarrassed when I arrived. A wedding is a wedding when it comes to formalwear.)

Once you enter the banquet area there is usually a table set up where you can write a little note to the couple, see their wedding photos, pick up a wedding memento if there is one, and put money in an envelope for them. It depends on how well you know the couple but I was recently advised that one million VND in clean, crisp five hundred thousand notes is appropriate. You’ll write your name on the envelope as well. It’s not usual to bring any other wedding gifts, unless you want to give something special or specific to the couple personally.

The names and amounts given are recorded after the wedding to ensure everyone knows how much a family gave so the couple can do the same in kind at a future wedding. In theory it’s more of an investment in the couple than a gift, as they’re expected to give the same amount down the line.

Next, find your seat. All you have to do now is eat, watch the show and toast. It’s likely there will be an emcee who will narrate things. It completely depends on whose wedding you’re at, but I’ve witnessed everything from bellydancers to small fireworks and happy, drunk uncles karaoking at the end. As opposed to the hushed atmosphere of a stereotypical wedding ceremony in America or Europe, which is the only other kind of weddings I have experience with, the banquet-style wedding is a reception.

From pre-dinner photos, to both families toasting on stage, to the newlyweds going from table to table to thank everyone, it’s a marathon for them. Just be ready to eat and cheers to whomever with a full mug of beer, especially if you’re a man. 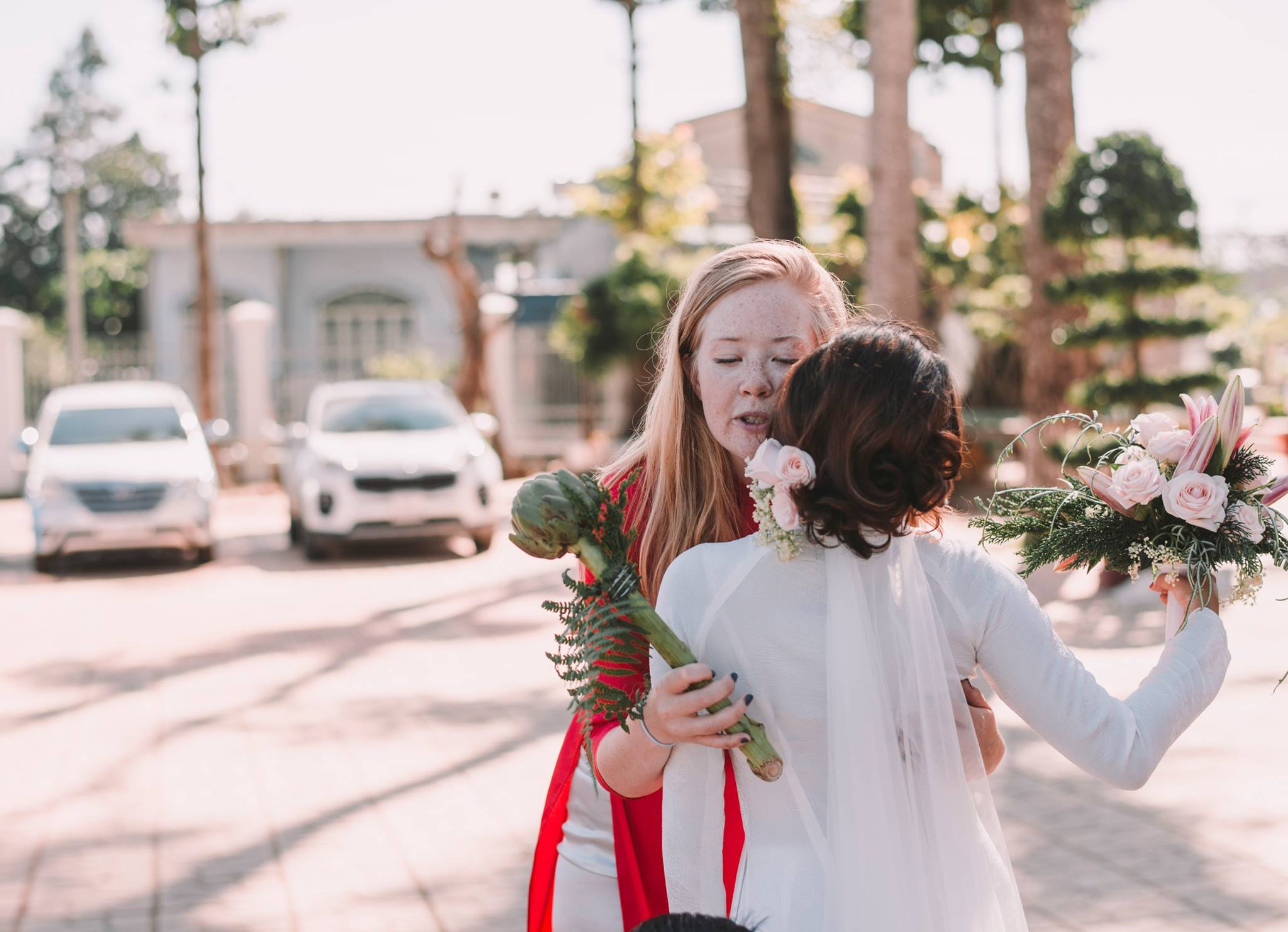 If you’re invited to come “capture the bride” there will probably be more expected of you. First, you need to be ready to get up well before dawn. Both times I’ve done this, with the groom’s family, the atmosphere is much more intimate and emotional than at the banquet. When you pile into a bus decorated with the double happiness sign and journey with your friend’s extended family through the pre-dawn light eating steaming banh bao, it gives you a real sense of warmth and anticipation. Of course, wedding-style, there’s much fussing, rushing and checking.

Once you arrive the action commences immediately so, again, be dressed to impress. Groomsmen will be gift-bearers and bridesmaids will receive them on behalf of the bride’s family. The point is to emulate what would happen if both families lived in the village so the groom’s party may park a ways away and then walk to the bride’s house with the gifts. The degree to which this whole process will stick to tradition completely depends on the families.

I won’t pretend to understand all the potential intricacies of this ceremony. Just a few of the things I’ve heard, for example, are that the groom’s party should bring 6 or 8 gifts but never 7 or 9 (unlucky numbers), and the couple leading the bridesmaids and groomsmen should be the most successful and happily married of all to bring blessings on the engaged. 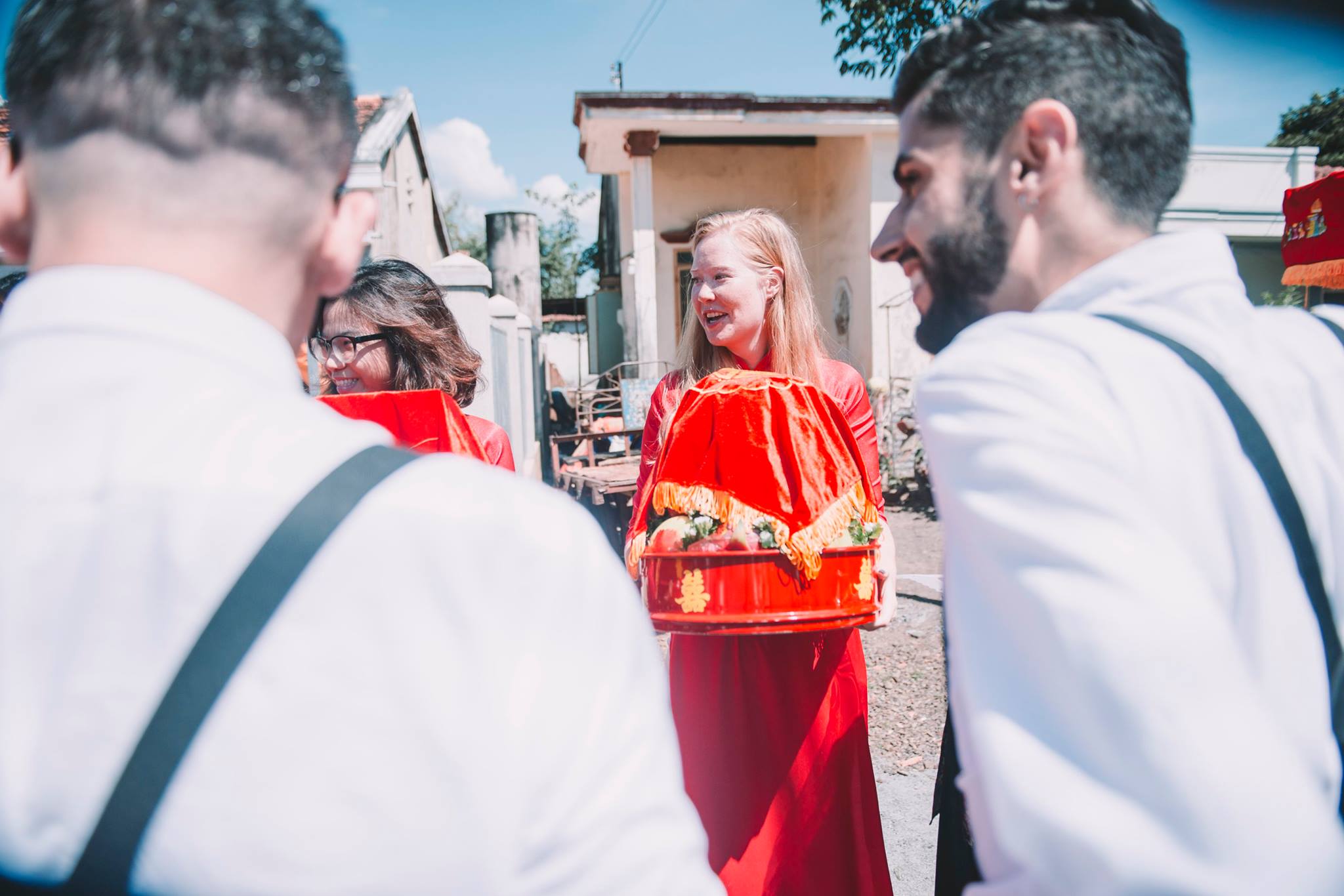 Generally in all ceremonies the groomsmen and bridesmaids will stand in two lines facing each other at the entrance to the house and the gifts will be passed from one side to the other. The bridesmaids then take the gifts into the living room or wherever the ceremony will be held and arrange them.

The next step of praying to ancestors, giving speeches and bringing out the bride is the most important and probably the most akin to exchanging vows or rings, if the couple won’t also be doing that. This is the crossing of a threshold, especially for the bride, who is in essence preparing to depart her family and childhood home.

What comes after this largely depends on logistics, there may be lunch at the bride’s house or some of the wedding party may journey back to the groom’s house for a ceremony to welcome the bride into the family.

One of the key differences between a Vietnam wedding and an American wedding, in particular, is that the emphasis is less on the couple and their love story. It’s more about the families. The celebration is just as much, if not more so, about the success of the parents and relatives in ferrying the next generation to this departure point into independence and adulthood.

Even after five weddings, that’s about all the primer on them I can give with any authority. So much depends on who is getting married, which is true for all weddings. Especially in Vietnam, there are infinite possibilities for how wedding ceremonies will meld old traditions with Western influence and how compromises will be made between generations and families. Admire all the hard work your friends put into this production and just enjoy yourself, above all.