“I’m ready for the challenge of telling more stories and representing my community.” 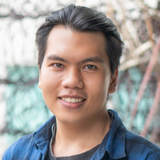 Bao Nguyen is a Vietnamese American director who is best known for his internationally-recognized works about Asian people, and the issues of ethnicity and identity that Asians face. Proof of the power and impact of his works, Bao was recently chosen to be in the top 100 of Gold House's 2021 Most Influential Asians List.

I was fortunate enough to talk to Bao Nguyen at a special time — a “pivotal” moment for his cinematic career, as he says.

In the past year, Asians in Western countries have suffered violent and traumatic upshots of racism. This significant period of the society has given Bao a newfound purpose, inspiring him to work tirelessly.

As I listened to Bao’s stories, I felt the pain and struggles of the Asian community. And I know, through the films he’s working on, Bao will be able to tell these stories in a way that’s clear to the world, and familiar to Asians. Because the way we express our emotions is similar to the eternal rule of cinema: show, don’t tell.

Nearly 11 years after getting his Master’s degree in filmmaking, Bao has made many documentaries, short films, music videos, and movies. In 2020, his documentary Be Water has resonated in the international film community, earning it nominations at many film festivals, and was even selected to be screened at the Cannes Film Festival.

This work is especially meaningful to Asians in the current sensitive period, when the wave of discrimination against Asians is rising in America. In this documentary about Bruce Lee, Bao Nguyen gives the audience a personal and intimate perspective on the ups and downs of the Hong Kong American martial arts legend’s journey to becoming an international superstar.

Finding a subject that “people think they know about” and looking at it through a different lens is also the style that Bao Nguyen chooses for his films.

“Everybody in the world knows Bruce Lee, but I don’t think they know his story. So I want to tell the story, the meaning, and the efforts beyond an already-familiar name. In this moment where Asian Americans are not recognized as Americans, through Be Water, I would like to show the contributions of the Asian community in building America in many ways.

Besides, I hope Asians find inspiration and strength in observing the journey of a prominent man, along with the very mundane aspects of Bruce Lee.

It’s taken decades for Asian Americans to feel like they had a chance to tell their stories, and it’s still difficult. It feels like there is only a certain amount of space that is allowed for us. After Minari made a splash during this year’s Oscars season, people said: ‘We have Minari this year, we can’t make more Asian American movies.’

And I hope this mindset will change, because the Asian American community includes Vietnamese, Indian, Chinese, Japanese, and they all have unique and different stories to tell. We know those differences well, so we need Hollywood to understand this too. This is a big challenge, because we have to create that distinction, and be unified as Asian Americans to speak out.

So, at this stage, I have to figure out when it’s best to be collectively Asian American, and when it’s the best for me to be uniquely Vietnamese American.”

We need good stories to bring about changes

Although his films typically embody social issues, Bao Nguyen does not consider himself a social activist. He sees himself as a citizen, a part of the society and the country, and he makes art to change the perception of communities and broaden people’s perspectives.

“I don’t think people are innately racist; racism is something that is learned through a system. Through storytelling, you can bring changes to this system. For me, creating a story could change the attitude that people might have against other races or cultures. So, if I can change this, that’s the first step into changing the system eventually, because the system is changed by law and policies. You have to change how the public thinks about an issue, about a certain community, so that could create pressure to change the law.”

After Be Water was released, many producers approached Bao with the desire to tell more Asian American stories, but he refused, since he didn’t want to be pigeonholed as someone who only tells Asian American stories. However, because of the turn of events in 2020, he realized that if he won’t do this, then who will?

“It makes me proud to be Vietnamese American, makes me hungry to tell more stories, and energizes me. I work a lot, make a lot of projects, but I’m not tired at all.  It fuels me and allows  me to flourish. I’m ready for the challenge of telling more stories and representing my community,” Bao said.

2. The presence of Asians in Hollywood

If you frequently watch Hollywood movies, you will easily notice the lack of films that tell the exclusive stories of Asian Americans. Although Asian culture is also a part of American culture like European, African, and Latin cultures, with Hollywood movies, Eastern culture and people are often portrayed as something exotic.

Asians in America are still not understood and appreciated as part of America. Asian people and cultures are always faced with questions and curious eyes. Bao gives an example: most Americans often bring shoes into the house, unlike what we Asians are taught at a young age. He shared: “I realize that I take off my shoes not because I’m Asian, but to show respect to that person’s home. So when I walk into that home, I don’t bring the dirt from the outside in.”

The chances to interact with people from diverse cultures in America has helped Bao compare and realize the meaning behind his identity. Finding meaning to everything that happens in life is also what makes Bao Nguyen better at telling cinematic stories.

For a long time, the story of Vietnamese people through the eyes of American and the world has only been seen through the lens of the Vietnam War. Even if it is mentioned, the war story has not been told from the perspective of a Vietnamese American. Moreover, Vietnamese Americans have many other stories to tell besides the war. Therefore, making a film with many layers and nuances is very important to Bao Nguyen.

Bao quotes a quote from writer Junot Diaz: “There’s this idea that monsters don’t have reflections in a mirror. […] If you want to make a human being into a monster, deny them, at the cultural level, any reflection of themselves.”

And he thinks that, for a very long time, the Vietnamese American community did not have a chance to see their presence in the American mass media.

Bao himself is affected by this issue: an Asian American child growing up watching all the stories of white American families will easily have internal conflicts, because the familial bonds in American films are strongly emphasized. This depiction is very different from what happens in an Asian family like that of Bao’s.

“The parental love that I knew of was what I saw on television: In American movies, you see the parents say they love you, they hug you, then they cry. But that love was very different from the one I received from my parents, so it easily made me feel lonely, then resentful.

And that was not fair to them. It’s not their fault, what they showed me was a different type of love. But it was love, nevertheless.

It is true that Asian parents don’t really talk about love, or be emotional in front of their children. But they show love in a different way. They will take care of you when you are sick, cạo gió (coining) for you, or massage your feet.

With the power of cinema, I want to change the ideal of familial love, that love can be shown in many different ways, and you can feel valued and special, no longer alone,”  Bao shares.

Bao Nguyen is deeply aware of the sacrifices his parents went through when coming to America. That is a common story of all refugees from all over the world: they leave their country to embark on a journey where they could lose their lives. The gratitude for the first generation is the driving force that helps the second generation of Vietnamese Americans like Bao Nguyen strive in what they do, and become the best versions of themselves. He believes that this cross-generational empathy has helped the Vietnamese American community succeed in America.

In addition to being grateful for the previous generation, he also knows that trying to succeed will also set the stage for the next generation of filmmakers. They would see that there is a Vietnamese American who has done things like this, and would know that there is a path for them to take on.

And because there aren’t as many of those cases as there are rich doctors and lawyers, my parents often said, ‘They’ve already found the path, why would you take the risk?’

And the decision to make films was a risk that I chose to follow my passion, just like the day my parents ventured to America in the past.”

In the arts and creative subjects like cinema, telling stories that reflect society and life can have two problems: one is that your creation makes others feel offensive, and the other is that you can easily get into cases of plagiarism.

When asked about the limits in creativity, Bao Nguyen answered:

“You should be ‘boundless’ as an artist. I teach and mentor a lot of filmmakers, and I tell them: “Don't censor or doubt yourself, because everyone else is going to doubt you.” But having questions will make you a more curious filmmaker. When it comes to telling stories of other people or communities, that’s when the questions are very important. Also, being able to question your choices as a director will enable you to defend your choices when people ask questions.

When you are making a film, as a director, you know more about your film than anyone else. It’s your vision, and how you take what’s in your mind and put it onto the screen. That’s when you have to know your choices, and stick to them.”

While Bao believes that an artist should have no limits in their creativity, he does have limits in how he treats other people’s stories:

“When I talk about boundaries, it’s more like the relationship between other people, how you decide to treat them and their stories, how you take care and tell those stories. You have a responsibility when you’re making a film about someone else, in many ways. Even though it’s an art form, it can be painful to other people, because the stories you tell can change people’s lives, for better or for worse.

Taking proper and responsible care of a story will make you a better filmmaker, make you more aware and grateful for being able to do such art.”

According to Bao, to tell a good story, the storyteller can start with familiar stories that they understand about the people and the lives around them. If a story comes from the truth, or real experiences, the message is clearer, and the emotions more heartfelt.

“In spite of that, don’t be afraid to ‘steal’ from other places, in terms of art, music, or films. Storytelling is something that has been around for centuries, so you can learn wisdom from the past. Find the connection between the emotions, themes, and lessons of stories from history and today, because all these stories are parts of the human stories.”