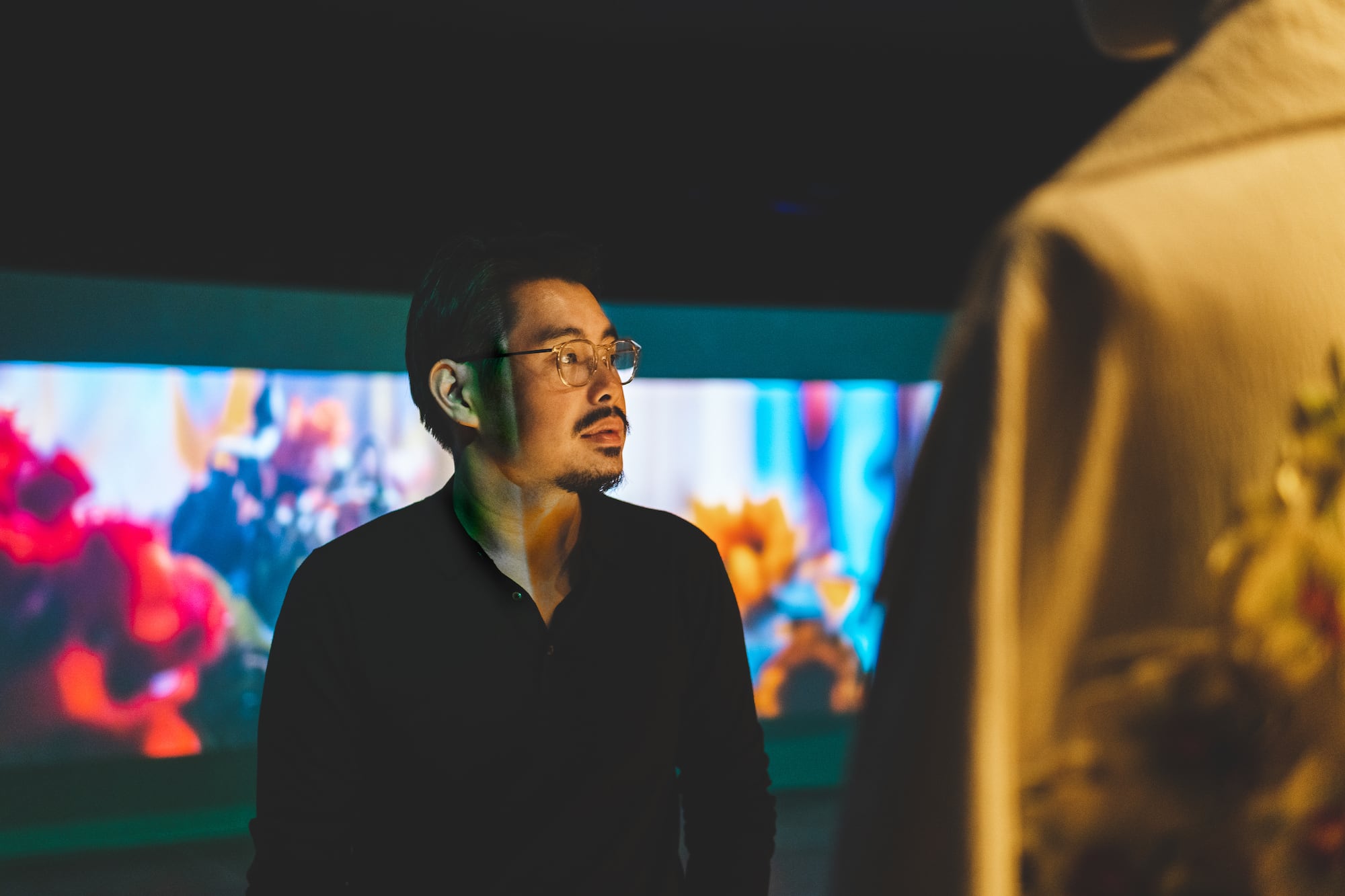 Nguyen shares with us the film he prepared, entitled “In the Forest, There’s a Door”, inspired by the No.10 collection: ‘EM HOA’ by designer Nguyen Cong Tri. He also shared that this was the first time he had experimented with setting up a multi-channel video, beyond the boundaries of a conventional cinema source. He reveals some messages of the project and the meaning of the “Cục Im Lặng” exhibition for him personally.

How would you describe your relationship to Cong Tri? How did you two meet?

When Cong Tri was one of the many featured on Dan Ong Magazine for their “Men Of The Year” edition, I was the director for the short film showcasing this edition. That’s how it all began. At the time, I was still quite new to Vietnam, so I actually wasn’t too familiar with his work. However, over the years, I’ve had the opportunity to witness his amazing talent firsthand. With the recent reintroduction through Arlette, the curator of the Cục Im Lặng exhibition, I’m honored to even join this project celebrating Cong Tri’s 20 years in fashion.

How did the collaboration happen? What does this exhibition mean to you personally?

Not only is this exhibition a personal privilege to be a part of, in addition to Cong Tri and his exquisite artistry, to be exhibited alongside other prominent Vietnamese artists that I admire and respect is quite humbling. As a Vietnamese overseas, I’ve always straddled between the line of not feeling like I fit in fully in neither America nor Vietnam. Thus, to be a part of a project that showcases work by uniquely Vietnamese artists, there is a sense of belonging and community.

Tell us more about the intersection of Cong Tri’s fashion and this film.

Since I’ve lived in New York City for much of my life, fashion has always been a part of the art and culture that I’ve always had a deep respect for. It’s not just an aesthetic but also a representation of how you express yourself to the world and, maybe more importantly, of how you feel in your own skin. It is the material that protects us and is a part of us – when we walk, when we breath. While we encounter fashion everyday, we really do take it for granted.

What was your first impression on collection No.10 “Em Hoa”?

I am a bit biased, but I think it’s his most beautiful collection. The attention to detail and the intricacies of the design is truly breathtaking. It is an honor to be asked to do a film for this collection, especially because it is the finale of the Cục Im Lặng exhibition.

Could you tell us about the recent film project you did for Cong Tri? What is the story and inspiration behind this collaboration?

Sometimes, filmmakers have too many things to say in a film, so I wanted to make a very simple yet meaningful story based on this one collection. I do not want to give too much away as I hope people will go see it for what it is; however, it is very much inspired by Cong Tri’s own story of how he developed Collection No. 10. It’s the idea of finding beauty and wonder in the mundane – the everyday – and taking the time to be grateful for what is in front of us. I used this as a basis for my film but built around the story of a mother and daughter.

Tell us more about the team that helped bring this project to life.

I was fortunate enough to work with artistic collaborators who I have worked with in the past. This includes Ray Lavers, the director of photography, who I have known and worked with for over 10 years after meeting him at a film festival in Toronto where our individual short films were playing. Our production designer and a fellow frequent collaborator, Kelly Hoang, also brings a lot of creativity and resourcefulness to all her work, so it’s always a great working relationship. Tung, our steadicam operator, was also a vital member to the project in terms of creating this dreamlike feeling; I remember working with him when he did his first steadicam gig, so I’ve really seen him mature and grow. In addition, I had a few friends who jumped onboard to help out such as Jenni Trang Le, Xu Xu, Nhat Tien, and Ton That An.

Beyond our regular crew, I also had the pleasure of working with Zorba for the first time. I have been a big fan of their work in the past after awarding them the top prizes at the 48 Hour Film Project awards when I was a judge. They really have a great cinematic knowledge and hungry passion for film, so it was great to work with them, especially producer Ka Nguyen and editor An Dang.

As with any project, the challenges are usually the same – time and money. We had a limited budget for this project, but we made sure to put every dollar on screen. Many people volunteered their time due to their passion for the arts as well, thus I am eternally indebted to them. I also had to finish this project while I am currently completing a feature length documentary, so the short window of time that I was able to commit to this was challenging too. Nevertheless, in the end, I’m very proud of the final project.

What impression do you want to leave with the audience?

I hope the main inspiration behind the project – finding beauty and wonder anywhere and everywhere – is a message that resonates with the audience. Moreover, having an appreciation and empathy for those that care for you is another important message that I hope will stick with viewers too.