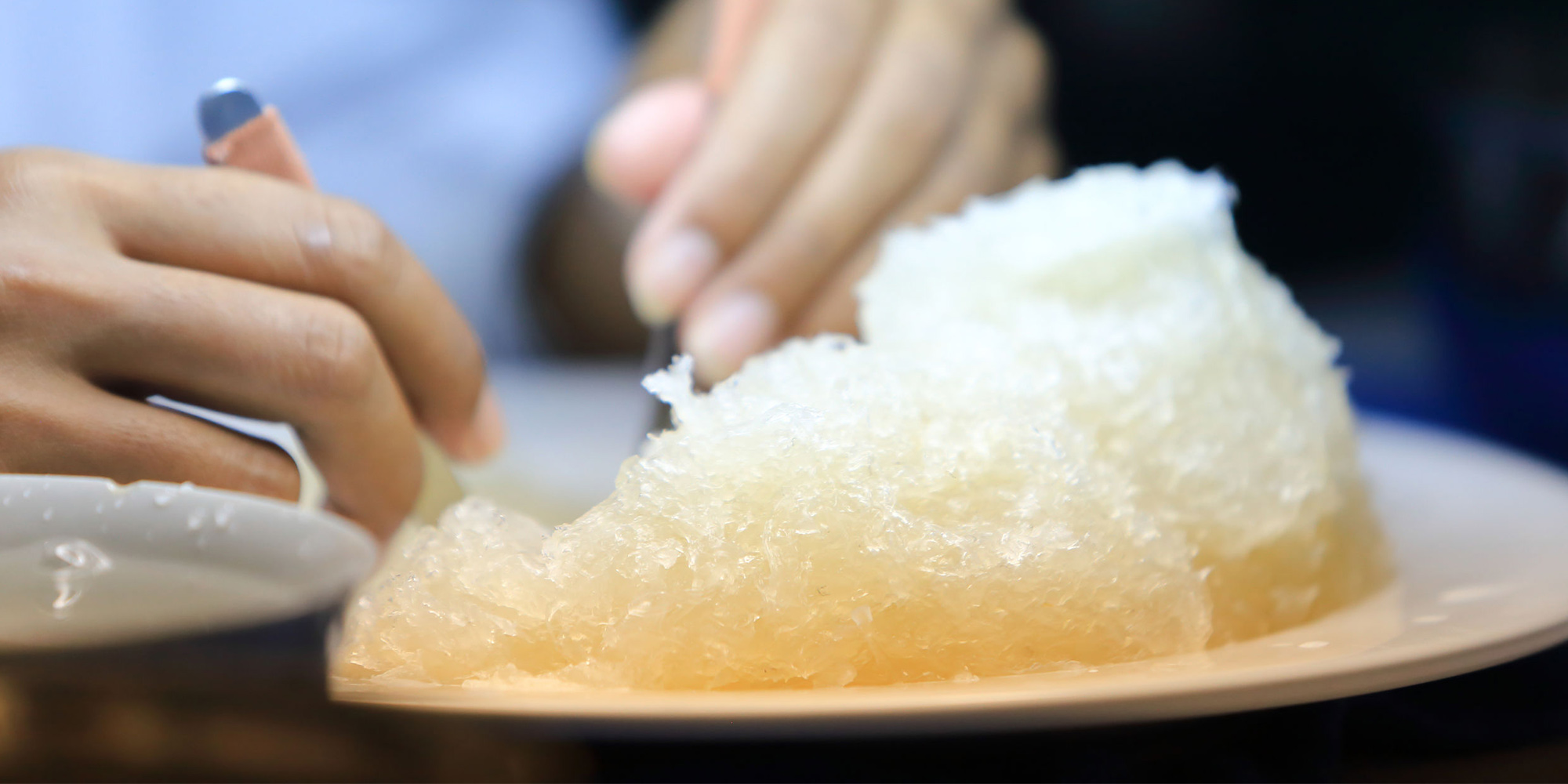 Edible Bird’s Nest: A Breakdown Of The Ancient Delicacy

You might have heard of it, some of you may have even tried it, but many of us appear to be mystified by it. So, what exactly is edible bird’s nest, why is it so expensive and is there scientific data that can prove its health benefits?

The name ‘bird’s nest’ conjures up images of twigs and tree bark. To the uninitiated, it’s hard to countenance how it could (or even why it should) be ingested in the form of a drink or a soup, nevermind how such a substance could provide health benefits to the consumer.

In order to understand more about this rare delicacy, there are a few basic things to understand. Firstly, the nest is taken from a bird called a swiftlet, indigenous to certain parts of Asia and areas of Australia. Swiftlets, unlike most birds, make their nests by expelling saliva. The saliva dries and hardens upon contact with air to form the nest which is, of course, edible. So, in other words, what you’re ingesting is…bird spit.

Is there scientific evidence to support its purported health benefits?

It appears that the health benefits of edible bird’s nest have yet to be disproven. Authoritative sources—from research mostly conducted in Singapore and Malaysia—suggest that the nests contain a significant amount of nutritional value. However, the long term positive physical effects have yet to be tracked comprehensively. In other words, the chemistry has been verified, and the nests appear to be loaded with healthy properties, but the final step will be to make an inarguable, empirical conclusion based on longitudinal evidence.

For now, the only negative coverage has been around cultivation methods—diseases can occur among farmed swiftlets when they are packed into single houses. Traditional methods of gathering nests by hand in a healthy ecosystem are less problematic, although there are obvious questions of sustainability around the practice.

Breaking down the health benefits

A detoxifier and oxygen supplier

Edible bird’s nest contains eighteen amino acids, some of which aren’t produced naturally by the human body. Amino acids provide many positive health benefits. The group present in bird’s nest combine to increase the rate at which our bodies metabolize toxic substances. They also stimulate the growth of red blood cells which are needed to carry oxygen throughout the body while expelling carbon dioxide.

Trace minerals in bird’s nest include Manganese (Mn), Copper (Cu) and Zinc (Zn) which together provide a powerful boost to many important functions of the body. Manganese is needed to maintain normal nerve and brain function. Also, it helps the body form connective tissues and balance sex hormones, and it also assists in fat and carbohydrate metabolization, as well as with blood sugar regulation. Copper plays a vital role in energy and red blood cell production. It helps to maintain nerve cells, and to regulate the immune system. And Zinc improves immunity and digestion. It also serves as a strong antioxidant, slowing the aging process while acting as an anti-inflammatory agent. It has numerous therapeutic applications for chronic diseases like cancer and heart disease.

Edible bird’s nest is said to have positive effects on the liver and the kidneys when consumed regularly for long periods of time. It’s loaded with predigested protein and nutrients, and consuming these in this rare form may aid the body in fighting off illness and disease. In fact, bird’s nest is currently being tested for its potential prevention of HIV according to The Japan Times.

This claim probably has the most supportive research behind it. The positive effects are hard to argue with. It has anti-aging and anti-acne agents, and it increases collagen and elastin due to its high levels of galactose and threonine. When combined with glycine, those elements can act to prevent wrinkles, support the reconstruction of skin cells, and reduce the formation of pigmentation spots giving way to an overall more balanced complexion.

Why is it so expensive?

Perhaps the most important factor that affects the cost of edible bird’s nest is its rarity. The birds are cave dwellers, and often build their nests within high caverns of limestone karsts, making the process of retrieving them extremely dangerous. Foragers are often people from mountainous areas who do not use modern day climbing equipment, which makes this an extremely high risk job. The harvesting process is also a time consuming one that requires countless hours of manual labor.

How is edible bird’s nest consumed?

First, bird’s nest needs to be cleaned. According to one local expert, Hai Duong, each individual nest can contain tens of thousands of insects, all of which must be hand-plucked before distribution.

Bird’s nest has been consumed in China for at least 400 years, most often in the form of a soup. However, it can also be served as a gelatinous dessert or a drink. It is often mixed with sugar because of the nest’s bland taste profile. In Vietnam, it’s primarily consumed in the form of a drink or edible extract, rather than a soup or dessert.

Due to the fact that it has historically been treasured for its skin enhancing properties, prevention of wrinkles and other skin-promoting effects, it shouldn’t be surprising to discover that it has recently entered the cosmetics market, and can be found in various high-end beauty products, especially in countries like Korea and Japan. In fact, it has been suggested that this trend is nothing new. Geishas, stories say, would even go so far as to even smear the bird’s droppings on their faces in order to enhance their skin.

How much is it Vietnam?

Edible bird’s nest remains one of the most expensive gastronomic items on the planet. Depending on the grade of the nest and whether you prefer to purchase it in its raw form, as a drinkable liquid, or as a food, the price will vary greatly. The highest grade available is 90% pure, which is edible as soon as the nest is harvested. When purchased in its raw form, one kilogram of high-grade bird’s nest can reach prices as high as US $5,000, but on average, one kilogram currently sells for around US $2,500.

However, you can buy it in small quantities which helps to make it feel more affordable. An average price for a two-month, 100-gram stash will cost roughly US $150-200 for a medium grade nest. If you drink it daily, that means you will be spending around US $3.00 per day. When you look at it that way, it’s shouldn’t feel like such a significant investment after all.

Yes, there are countless fakes being sold across the globe, and in many forms. As with any high-end consumer product, do you research and know what you’re buying. Get to know the supplier and find one that you trust. If it’s cheap, you can guarantee it’s either fake, or the amount of real bird’s nest is so low that its health benefits are negligible.

The rise in international demand for the delicacy has inarguably harmed the swiftlet population which is now considered on its way to becoming endangered. Over-harvesting is occurring and there has been a rise in inorganic farming methods. This has resulted in a desire to regulate the market, but this has yet to gain traction.

When to consume it

Keep in mind that most experts believe that in order to reap the benefits of edible bird’s nest it must be consumed over long periods of time. And it shouldn’t be consumed more than once a day as the body cannot absorb that many nutrients in such a short period of time. Many say it’s best to consume bird’s nest in the morning on an empty stomach in order to maximize the body’s capabilities to take the nutrients onboard.

How much to consume

Experts recommend 2 grams of dried bird’s nest or 60-80 milliliters of liquid per day.

It appears that the nutritional value of bird’s nest is unarguable but, just like taking other vitamins and supplements, this comes with a price tag. When you do the math, when taken in limited amounts, bird’s nest should be within budget. Remember, experts say you do need to be consistent in taking it, so don’t expect any benefits to appear immediately. And of course, as with everything else in life, the only way to know for sure is to try it out for yourself.