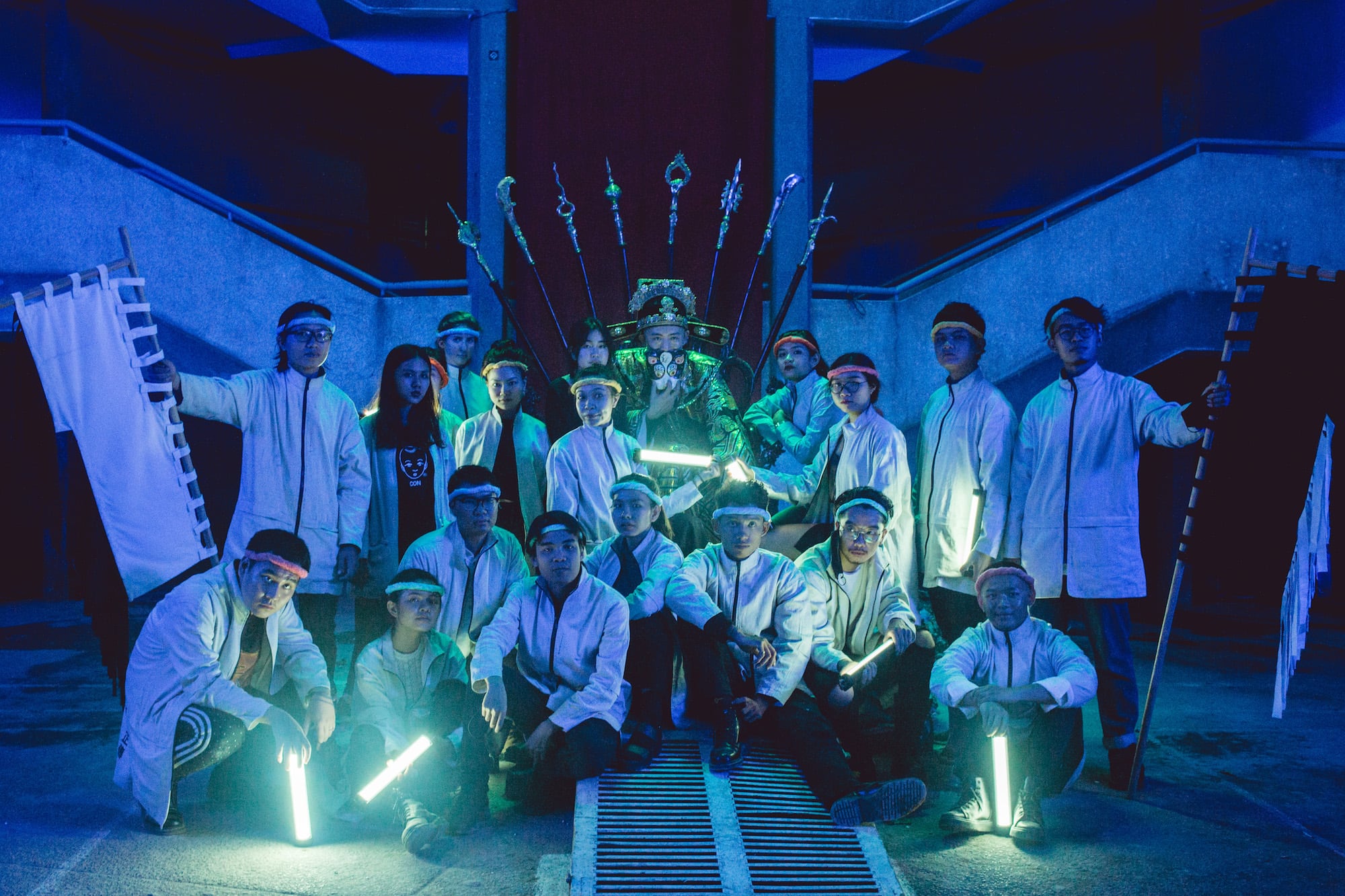 Nichitsu, Japan. This abandoned tin mining “ghost” town where Gunma, Saitama, and Nagano prefectures meet is an unlikely starting point for the partnership of Robin Mahieux and Anh Phi, creatively better known as Robin and Cako, who directed “Saigon Has No Label.” Released at the start of February, the promotional short for the Label Concept Store in Ho Chi Minh City has been shared on 88Rising, the influential American media platform that’s helped Asian artists like Keith Ape and Rich Brian to breakout. And the duo have also been honored with an invite to show the film at the BFFF—The Berlin Fashion Film Festival—that pushes state-of-the-art filmmaking.

Even though it only lasts two minutes, we might look back on “Saigon Has No Label” as the moment our local creative scene came together. It features the “extreme” custom Bandit9 “EVE” motorbike and locations like the old Thanh Da apartment building, Cu Xa Thanh Da—one of the city’s first apartment complexes built in the 1960s for officers of the Saigon government.

But Nichitsu was where the partnership of Robin and Cako really formed—although they’d put together another short film in the summer of 2016, called “Dao,” about a Vietnamese immigrant in France. “We made it on a mountain with one of the tallest waterfalls in the country in a single 24-hour shoot—just myself, Cako, and Nhat Huy,” Robin Mahieux remembers.

Robin, who’s from Toulouse, had been in Japan as director of photography for Red Bull. He’d called up Cako to talk about a side project he had in mind to make a short film in the town named after the mining company that built it—Nichitsu. His newly-found creative partner, who’s from the 94 arrondissements of Paris that’s half ghetto, half countryside—”one minute you have crack dealers, the next you have cows”—booked a flight immediately.

The next day they drove three hours in a rented car to the “haikyo” (the name for abandoned Japanese ruins or buildings) where they shot an URBEX-style film about the deserted former tin mining town. It was the point Robin and Cako decided to continue “to tell stories about countries more rarely heard of,” and come to Vietnam.

“We realized our combination was complementary—we don’t have ego conflicts, it’s more like collaborating and building on each other’s ideas. It all comes together very easily,” Robin shrugs. “So after that, we asked ourselves ‘What do we do next?’” Cako adds.

Cako had often visited Vietnam—although he was born in Paris his parents are both from Saigon—so it was an obvious next destination. “It’s perfectly positioned in Asia, and it’s evolving,” Cako says. “I also felt like I was re-engaging with my roots—although I’ve been back as a tourist and with my family before, it’s different as an adult, you look at the city differently…you see it better.”

“Friends had suggested people for us to connect with in Ho Chi Minh City—including The Lab, who run the Label Concept Store. In fact, the Lab’s creative director Tuan Le was one of the first people we met. There was a great energy between us, and he proposed a few projects, one of which was the ad we made together for AIA’s ‘Real Life Journey‘ campaign; another was The Label Concept Store Film that became ‘Saigon Has No Label,’” Robin continues.

The Robin and Cako directed film takes a surreal science-fiction approach to the promotion of the Label Concept Store. Its eclectic style, which director of photography Ray Lavers helped realize, reflects the no-rules energy of the city. “But when we first arrived at the store, we saw some stools and some ceramics and we were like, “What are we gonna do?” We didn’t want to just do a video in the shop—the kind of boring video you see everywhere,” Robin shakes his head.

“We decided that in “Saigon Has No Label” we wanted modernist architecture, Bandit9 bikes—like the one Truong Gia Bao, who’s the founder of the “All About Him” label, leans on in the film—and the wardrobe was important too. And, in the end, the clothes were crazy in the film thanks to the stylist, Thuc, who’s become creative director of Label. Of course, we have stores in Vietnam like H&M and Zara now, but there are all these local brands like Thuc’s label and Moi Dien that we’re all proud of,” Cako says.

“And for the cast, the team tried to find atypical faces, rather than going through an agency,” Cako continues. “Many were friends, or friends of friends, but they were locked in their circles—the art people, the fashion people—and the team behind the film really wanted to bring them together,” Robin adds.

In “Saigon Has No Label,” there are people like the actor Cau Boi who plays a kind of Dr. Frankenstein at the start. Then there’s the model Dasha Nguyen with a sharp blonde buzz cut; Kim Co, founder of the Con Shop and label, who they shot in the swimming pool; and even an old lady they discovered at a market stall near the studio. “She said ‘no’ to being in the film at first, but Thao Kuong, the producer, told her she was pretty. She laughed and ended up agreeing,” Cako remembers.

The experimental electronic soundtrack that weaves in “slave chants and spirituals, ceremonial percussiveness and tribal beats” came from French artists Mohave who’ve worked with artists like Lomepal and lent music to shows by YSL. “We chose this track because it has so many colors,” Robin explains. And recited over the top is a poem by The Lu called “Nho Rung” or “Nostalgia for the Jungle” chosen by Tuan Le that, Cako says, “really added another layer and dimension to the film.”

All of Robin and Cako’s richly directed films reward repeat viewings. “Saigon Has No Label” is no different. Here, you have to watch (or re-watch) the finished film carefully to spot the products it was promoting. There’s furniture from The Lab, like their “heavy metal remix” of the ubiquitous plastic street stool. And, as the Label Concept Store is a showcase for other creatives (“Label” is a conflation of “Lab et al”), you might also spot other items like the Hey Camel ceramics they stock. “We wanted to integrate things from Label into the story but in a very creative way. We wanted to get at the creative soul of Saigon. We thought it would be even more powerful to make something that reminded people how they feel being here,” Cako adds.

For the scenes at the Thanh Da apartment building—like the one with the neon torches—some of the residents stayed in, but some came out to watch Tuan Le dressed as an actor in a Vietnamese opera receiving a Hey Camel “urn” from model Uyen Vu, and The Bunker’s Mike Pham—content chief for the film—as a necromancer circled by motorbikes. “You can see that during the motorbike scene too where residents are watching from their balconies. And you might spot a local kid with a toy gun that wasn’t scripted, and we kept it in,” Cako adds.

“But when we first shared the “Saigon Has No Label” script people were like ‘Why? I don’t understand!’” Robin smiles. “It’s like the trailer of a film that will never come out,” Cako continues. “There’s no way to describe it—some people say it’s a fashion film, some people say it’s a music video—it’s just a film, it doesn’t have to be in a box.”

“And it was a cool landmark for us,” Robin nods finally. “The release of this film marked our one year anniversary of living in this city we love.”

Behind the scenes photographs courtesy of Thuy Truc, Mike Pham, and Phong Chac.