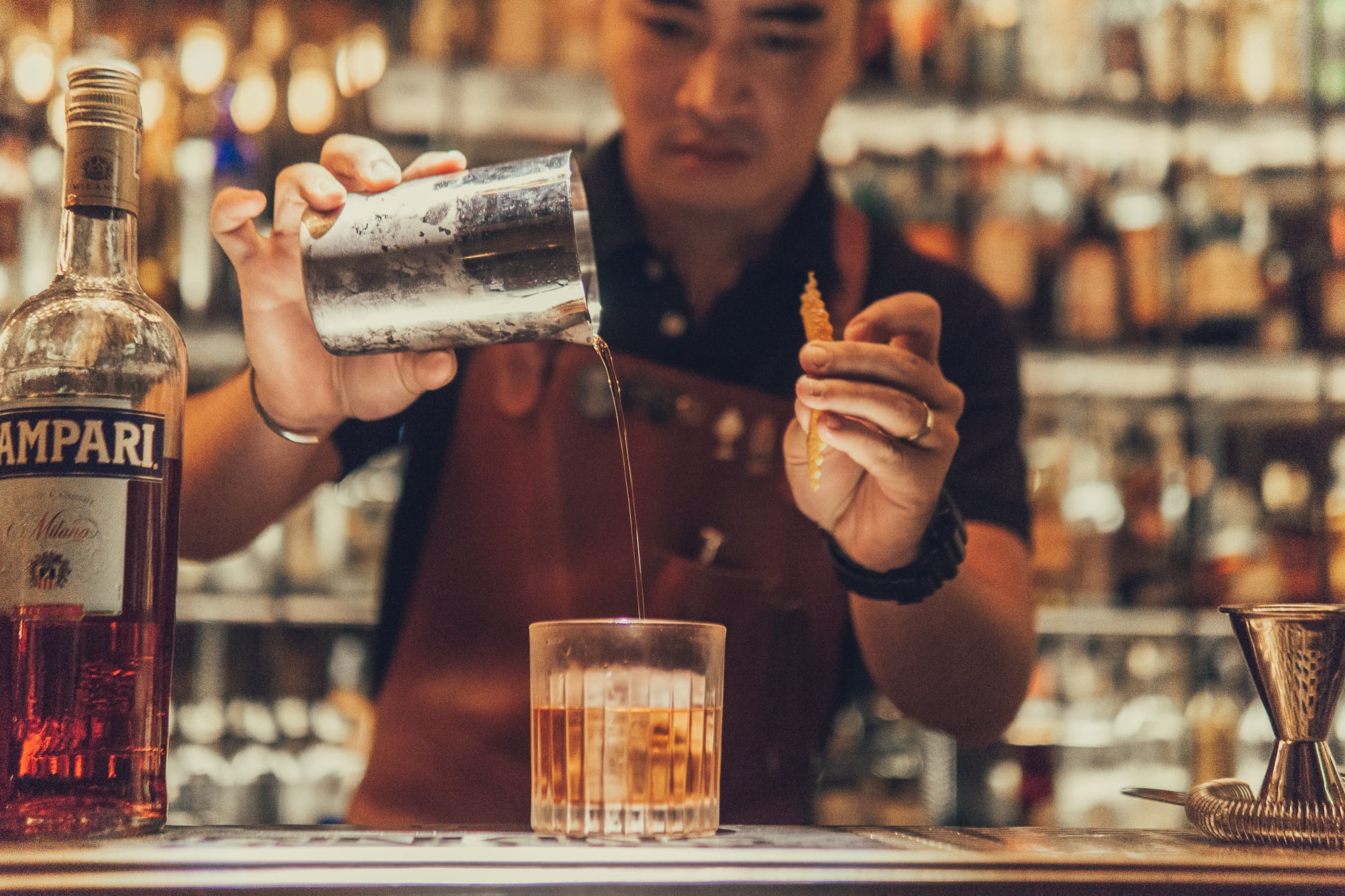 Drinking & Healing, managed by the GuruGroup, reinvigorated the speakeasy scene in 2018. They did it by creating a dramatically lit bar with an angular shape that makes the space feel intimate on quiet evenings and private even at the weekend. There’s exposed brickwork, steel, and industrial lighting. And added to that, Drinking & Healing is lined with small ornate smoking balconies that look across to the Bitexco Tower and a blinking neon sign on the side of the building that reads “Nasty.”

In October, a little over a month after opening, Hidetsugu Ueno from Tokyo’s High Five Bar hosted a masterclass here drawing bartenders from across Saigon. That afternoon, it became clear that Drinking & Healing planned to be much more than an all-style-and-no-substance speakeasy—they wanted to use the bar as a place for young local bartenders to hone their talents and perhaps push for a place in Asia’s Top 50.

The youthful, handpicked team the bar has gathered give it a house party feel where the hosts are having as good a time as the guests—which is probably the true spirit of the speakeasy.

And everyone in the team is clearly obsessed with the mixologist’s art. Like supervisor bartender Vu Doan Vien Du whose apron has a line of pin badges on it given to him by friends, family, and special guests. “This one’s from the Diplomatico rum representative, Aaron Rizzo, this one’s from Master Ueno,” he recites enthusiastically. “This one’s from Chivas Global, and this one’s from another friend. Antonio Lai, from Quinary Hong Kong. This is from my brother, who’s a bartender too—he’s the guy who taught me everything. And this is an extendable mixing spoon from Monkey Shoulder’s brand ambassador Jay Gray,” he adds before preparing our first drink.

The Boulevardier cocktail has been called the Negroni’s dark, sexy cousin. “So that’s what I’m going to make you,” Vu Doan Vien Du smiles from behind his station at this equally dark, sexy bar. Louis Armstrong segues into Frank Sinatra on the sound system as Vu Doan Vien Du presents us with the bottle of Four Roses bourbon that he’ll use along with Campari and sweet Vermouth.

The Boulevardier is essentially a Negroni with the gin switched out for whisky. It’s a cocktail whose creation is credited to the exiled American writer and socialite Erskine Gwynne. Gwynne left the States during prohibition “when bartenders had three choices: quit their job, work in a speakeasy, or go abroad,” Vu Doan Vien Du explains. He used American bourbon instead of gin to stave off homesickness, and the name “boulevardier” is both the name of the magazine he created in Paris, and a word meaning “a wealthy, fashionable socialite.”

“I really empathize with Erskine Gwynne,” Drinking & Healing’s supervisor bartender continues. “For a long time, I struggled to find my calling too.” Vu Doan Vien Du worked in various positions in a number of restaurants, bars, and even homestays until one day, during a shift as waiter at Urban Kitchen, the bartenders piqued his interest. “I’d even wash glasses to get a better look,” he laughs. He took to studying cocktail recipes and when a bartender called in sick Vu Doan Vien Du stepped in…and never looked back.

He slides his drink over to us. The Four Roses—a bourbon from a distillery that dates back to even before Erskine Gywnne’s time—gives the drink more depth and intrigue compared to the cleaner-tasting Negroni. “My goal is to elevate the drink culture of Vietnam to another level,” Vu Doan Vien Du nods confidently as we finish his Boulevardier.

Do Huy Hoang won the Jumping Goat Cocktail Competition, organized by New Zealand’s Jumping Goat Liquor, by beating nine other local bartenders. He did it with his Healing Goat cocktail—a twist on the traditional gin and tonic.

He takes down a bottle of Napue gin created by Finland’s Kyrö Distillery from the well-stocked Drinking & Healing shelves. Napue was voted “The World’s Best Gin For Gin & Tonic” in 2015. And as a former bartender at another of Saigon’s best bars, The Gin House, Do Huy Hoang knows the spirit well. He adds 30ml of the gin to the same amount of Jumping Goat vodka—a liqueur infused with Fair Trade coffee and spices. “True to the ‘healing’ spirit, it should be the perfect pick-me-up when you’re feeling fatigued,” Do Huy Hoang says.

He adds homemade apple shrub “that’s a bit like apple cider” and a squeeze of lime. Finally, he tops the drink off with London Essence Co. Organic Tonic and carefully sits a saucer-shaped slice of apple fitted with a sprig of rosemary and a yellow flower on the top.

“Maybe winning the competition was a bit of luck,” Do Huy Hoang modestly admits about his first ever bartending competition as he serves us his drink, “but it’s a big motivation for me to keep learning and getting even better.”

The cocktail originally emerged shortly after the Boulevardier—this time not in Paris but in New Orleans. In fact, the name “Vieux Carré” refers to the French Quarter of that city on the Mississippi as well as this cocktail, whose recipe was first recorded in the book “Famous New Orleans Drinks and How to Mix ‘Em” in 1937. Its “all spirits no filler” recipe is said to evoke the citizens of the city itself—”rye for the Americans, Bénédictine and cognac for the French, sweet vermouth for the Italians, and bitters for the Caribbean people.”

At Drinking & Healing they barrel-age their Vieux Carré for four to six weeks. “It makes the drink taste so much smoother and the color becomes totally different,” he adds about his cocktail, holding the drink up to show off its rich golden-red hue.

Le Ngoc Phien joined Drinking & Healing after previous stints at Glow and the EON 52 Heli Bar—in the Bitexco Tower. He moved to Drinking & Healing in the Bitexco’s shadow because “they’re building a reputation as a true cocktail bar” which he wanted to be part of. The Vieux Carré is an appropriate choice from a bartender who stumbled into the business after studying chemistry. His graduation project was on wine and so he took a foundation bartending course to understand the connected craft better—which increased his fascination with brewing and distilling techniques, and of course, bartending.

We try his Vieux Carré. The barrel-ageing has softened the potent mix of rye whisky, cognac, and vermouth, and the Benedictine gives it a warmth and sweetness. Walter Bergeron, the head bartender of New Orleans’ Hotel Monteleone, first mixed the drink at the hotel’s carousel bar—famous because it slowly rotates. Very soon, Drinking & Healing’s bar might become as iconic to Saigon.

All photos for Vietcetera by David Kaye.