DJ's Vapes: The Vape Shop That Gives Hope To Vaping In Vietnam | Vietcetera

DJ's Vapes: The Vape Shop That Gives Hope To Vaping In Vietnam

DJ's Vapes: The Vape Shop That Gives Hope To Vaping In Vietnam 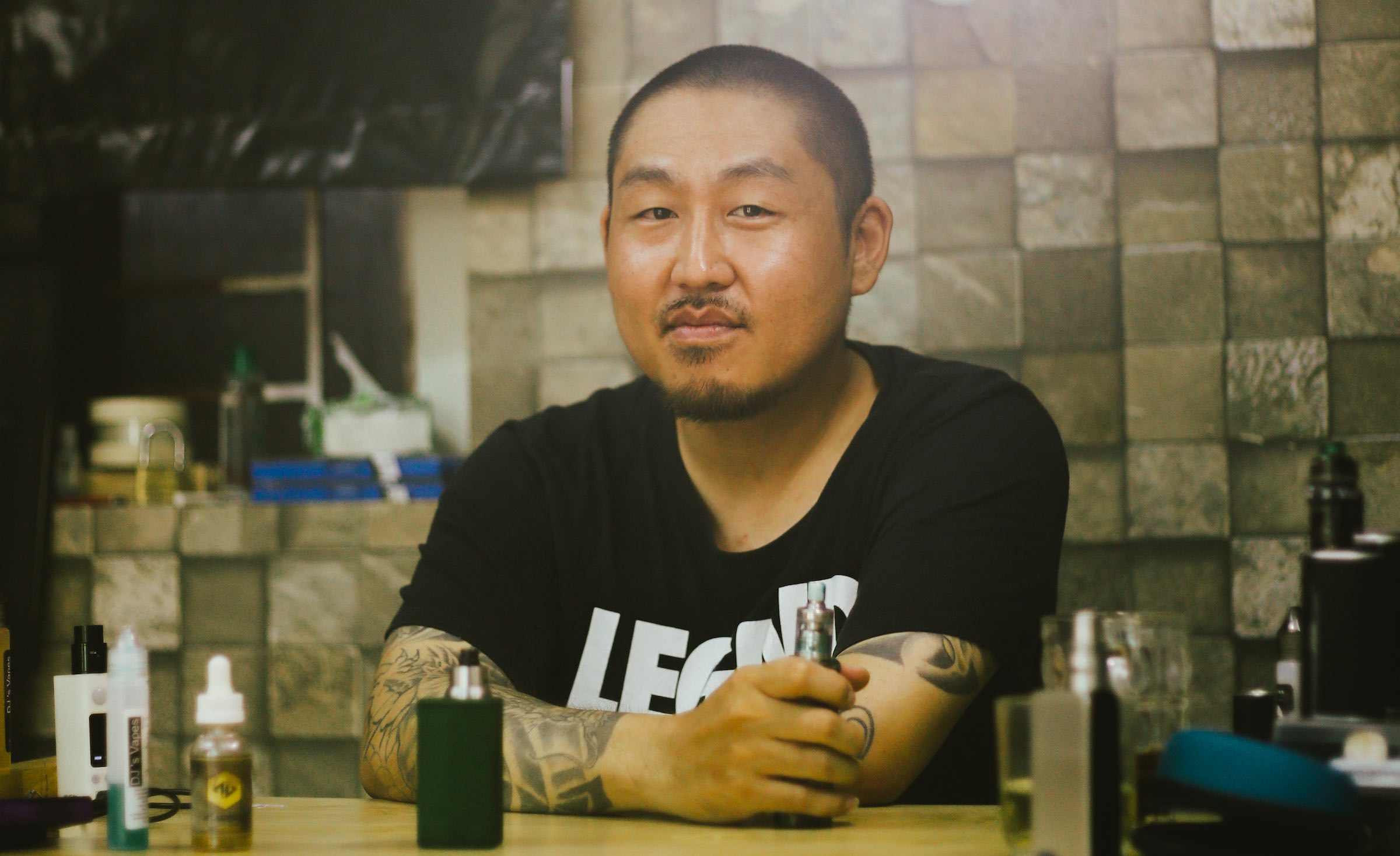 If you walk into a vape shop in New York or LA, you’re likely to meet someone behind the counter who is willing to take the time, for free, to teach you the ins and outs of your device. You simply have to want to learn. It’s counterintuitive to the usual, efficient style of a salesperson, whose job is to push a product on you. This sensei-deshi culture in vaping arose because the survival of vaping, in the face of Big Tobacco lobbyists worldwide, depends on community.

Saigon doesn’t seem to know it yet, but we already have our own vape guru. Jon, owner and founder of DJ’s Vapes, is a California transplant who has been spreading his knowledge and handmade, high-quality juice line for several years now out of a small shop in District 7.

The e-cigarette industry is expected to be worth $10 billion by 2017. It has its fair share of stuff made for showing off and marked-up cheap products. Still, there’s a breed of vapers with geek-level knowledge, like Jon, who have a different bottom line: it’s about more than just quitting smoking, chasing big clouds and fancy toys. Jon has created an atmosphere at DJ’s Vapes that’s about chilling with friends, trying new flavors or mastering a new coil build and, above all, making sure people know what safe, high-quality vaping really looks like. 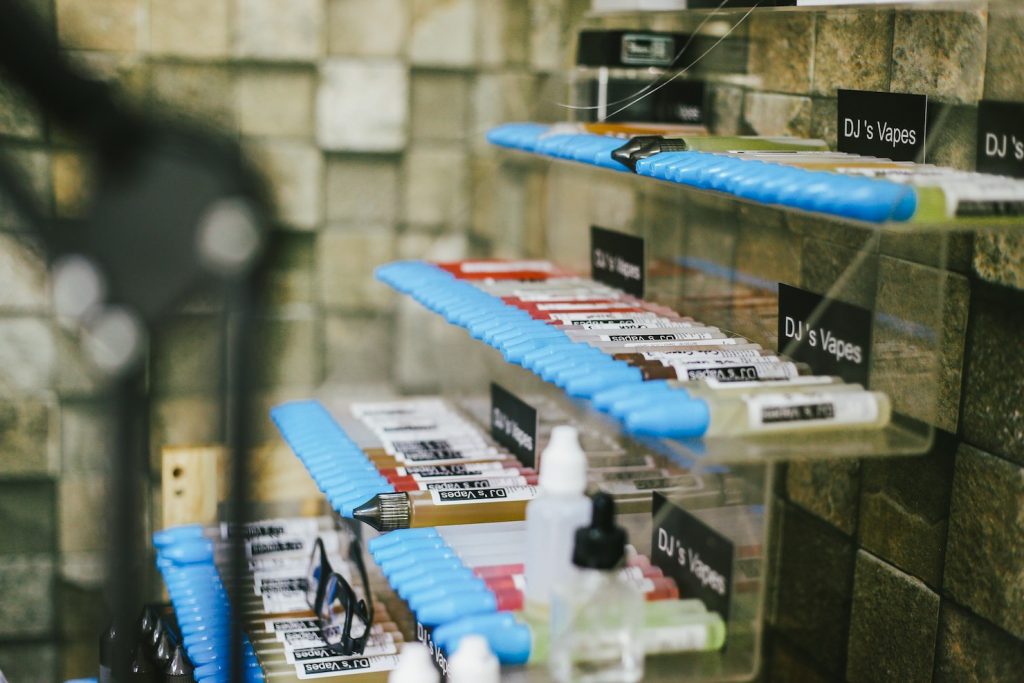 How did you get started?

Our first venture into vaping was in California, my brother-in-law wanted to open a shop and needed the money to do that, same name, same juice line, except his juice doesn’t sell in Vietnam so I took them all out.

They were American flavors, things Vietnamese people don’t like, like really sweet juices or not sweet juices, nothing in the middle.

How long have you been making juice?

I’ve been making juice in Vietnam for about three years now. I started because other stores was hurting my wallet, I was buying like 8 or 9 million a month in juice and every single time they had like a new product I went in and bought it. You couldn’t get any other vape stuff here like back a few years ago. It was only him or one other guy that was importing shit from Thailand but it was worse than Chinese stuff.

How did DJ’s Vapes come about?

Technically I opened the shop because of my teacher friends. I quit teaching to do this full time because I want to give a quality product to Vietnamese people—something that they don’t have to worry about ingredient-wise, coil-wise, health-wise, battery safety, coil safety and general information about vaping. 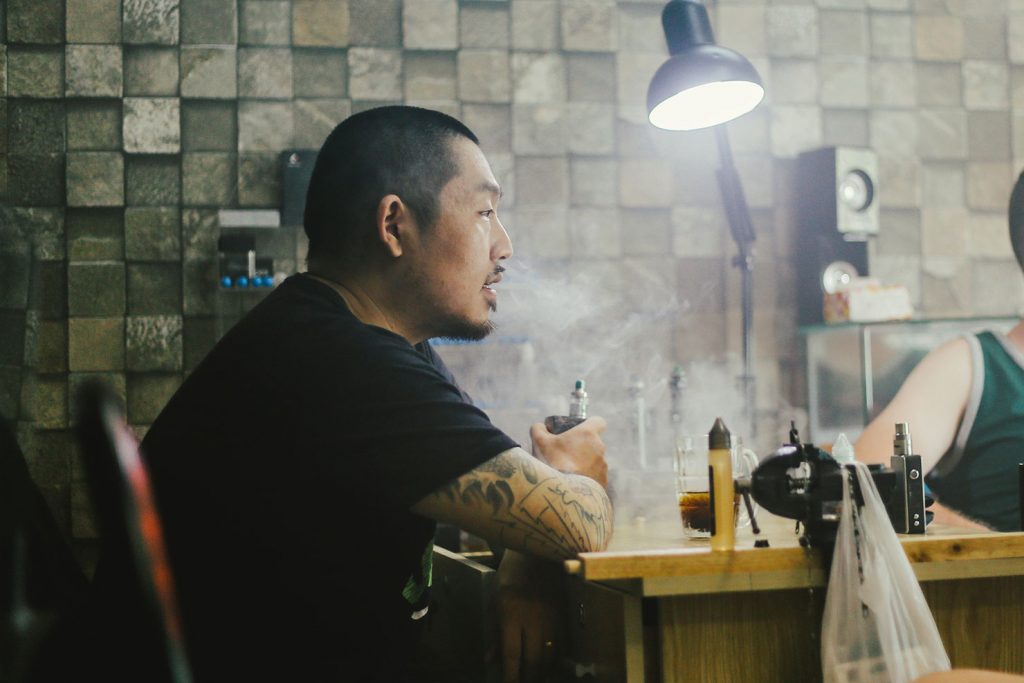 Do you feel like you’re bringing the American vape experience to Vietnam?

Nah, the shop here is always evolving, right? Because you have different customers that come in, so I’ll even make juices like Pandan leaf for Vietnamese people, things that Americans won’t hit. Product-wise it’s a different market here than in America.

What are some of the differences?

The biggest difference is that the majority of Vietnamese don’t have money to spend. Like a quality product that is on Facebook or on youtube that people do reviews on, they cost anywhere between a hundred to a hundred and seventy dollars and Vietnamese people can’t afford it, and if they can afford it, they question if it’s real or not.

Do you spend a lot of time teaching people about vaping?

I welcome anybody to my shop. I’ve even taught other shop owners how to build, correct coil etiquette, about ohms and the workload for specific batteries. But then they’ll be like “yea ok, ok, that’s fine I understand” but when they open their shop, they go straight back into the Vietnamese way of thinking, buying the cheapest batteries they can buy, getting the maximum money for each battery, even though it’s not a good battery. 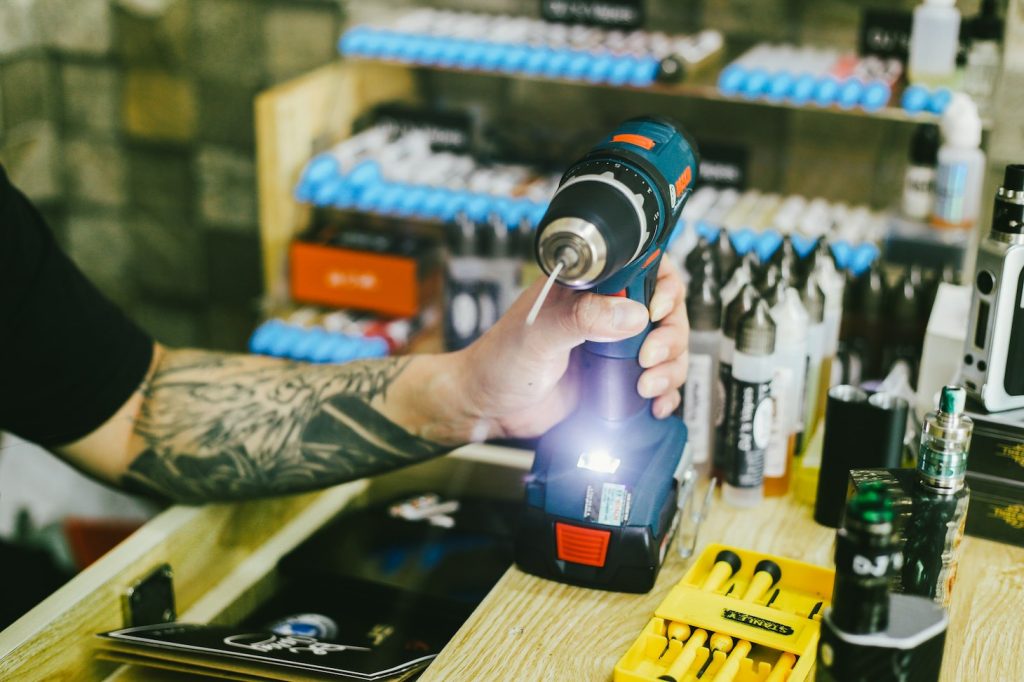 Is there anybody else doing what you do in Vietnam?

Yea, there are other people who think the way I think but because the majority of the people are uneducated in vaping, it doesn’t really dent it, like, it doesn’t matter. You go into like those vaping forums on Facebook everyone’s asking the same questions: “I do this many wraps it’s this many ohms what’s the wattage,” every single mod comes with the screen, they tell you exactly what it’s supposed to be at the only problem is the majority of people here they don’t speak English so they can’t go onto like youtube and watch Westerner reviewers like Riptripper.

You have someone who’s doing review videos for you now?

Hoang Tripper. We just started, we have one review video out on one of the products. The reason why I started the reviews is because people are buying clones for authentic prices. That’s a problem. You buy a clone for six dollars to eight dollars, and you sell it for 2.4 million? I understand inflation but not multiplied by 24. And they don’t realize it until they come to my shop and they actually see the authentic and see the difference. So we’ll be doing review videos maybe one every two weeks on expensive parts.

So you’re evolving as your following evolves?

Yea, but the thing is like there’s so many shops opening in Saigon right now, like every three days there’s a new shop opening. The thing is Vietnamese people, when something’s new, they’d rather go there, they’ll come back to my shop but maybe after a little period of time. A new shop opens, they’ll chill there for like a month. They’re just trying to see what else is out there because I only carry certain things, I don’t carry everything. I carry things that I would personally use, things that I would like building for people and not just like “oh, it’s popular” so I’ll carry it.

Can you tell me more about your personal evolution in vaping?

I had to quit smoking. I was a two pack a day smoker and I was smoking Newports, so like menthol, since I was 11 and I coughed up part of my lung about seven years ago. I went home, I had a doctor’s appointment, I was bleeding internally, they said that the menthol had cut up the bottom portion of my right lung so it was either quit smoking or die. And then I found vaping. And I’ve been consistently vaping for 4.5 years. 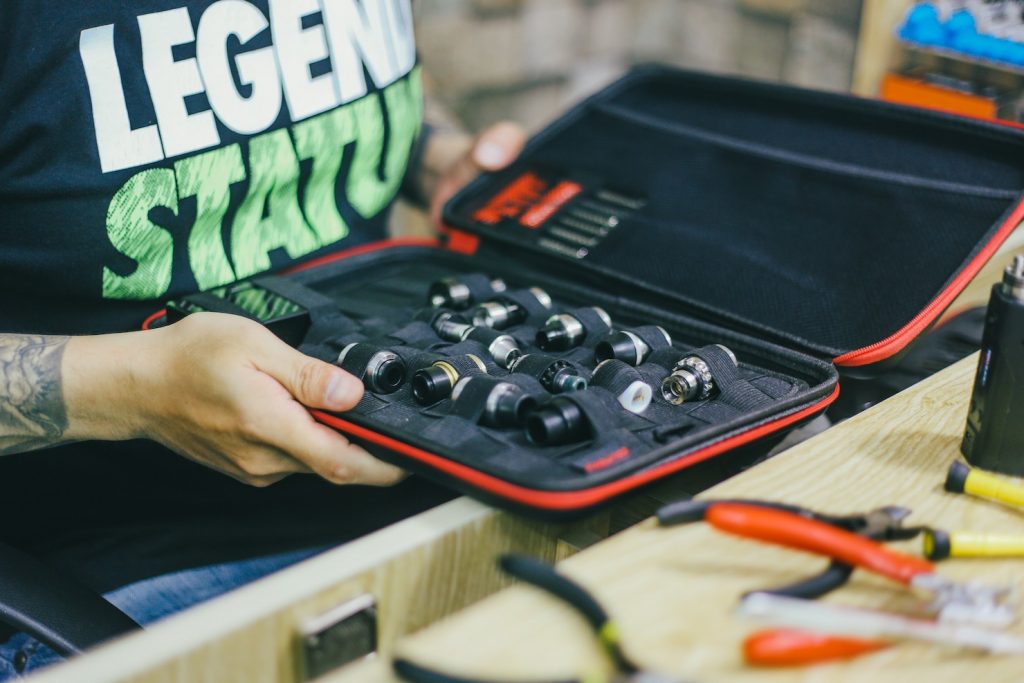 The vaping scene in Vietnam has grown a lot, why aren’t you trying to be a bigger, ever-expanding shop?

I like being like a mom and pop and all that stuff, little store. Not commercialized. It’s just like the majority of people here that own shops they don’t know anything about vaping. They just have money to throw around and buy products but a majority of the products are from China so it doesn’t say much. When people come here, they feel welcome. I welcome everybody, everybody has a place here. If you have a build that you don’t know about, bring it over I’ll fix it for you and stuff like that. People can bring set-ups here and I’ll tell them if it’s safe or not for certain wattages and voltages.

Something like that, but more like just free education for vaping because many people don’t know about vaping.

When I started vaping, there were a lot of vapers but all of us were uneducated in vaping so we all learned by making mistakes.

In the States I’ve seen stickers that say basically “down with big tobacco” , etc., at vape shops, is there something of a revolution going on in vaping?

It’s a war. Every single day the vapers in the U.S., they’re fighting. There’s petitions going on everyday like we have the right to make phone calls to the Whitehouse or whatever and I do that here too, I’ll wake up at five in the morning when it’s petition day and I’ll give the Whitehouse a call. If not, vaping around the world is going to go down. They’re going to close all the factories in China and then we’re fucked. It’s the lobbyists driving that. Definitely. But then we have like senators in the States that, actually, they’re pro-vaping and they’re the ones standing up for all this stuff, but there’s not enough of them because they’re getting paid off by tobacco companies. 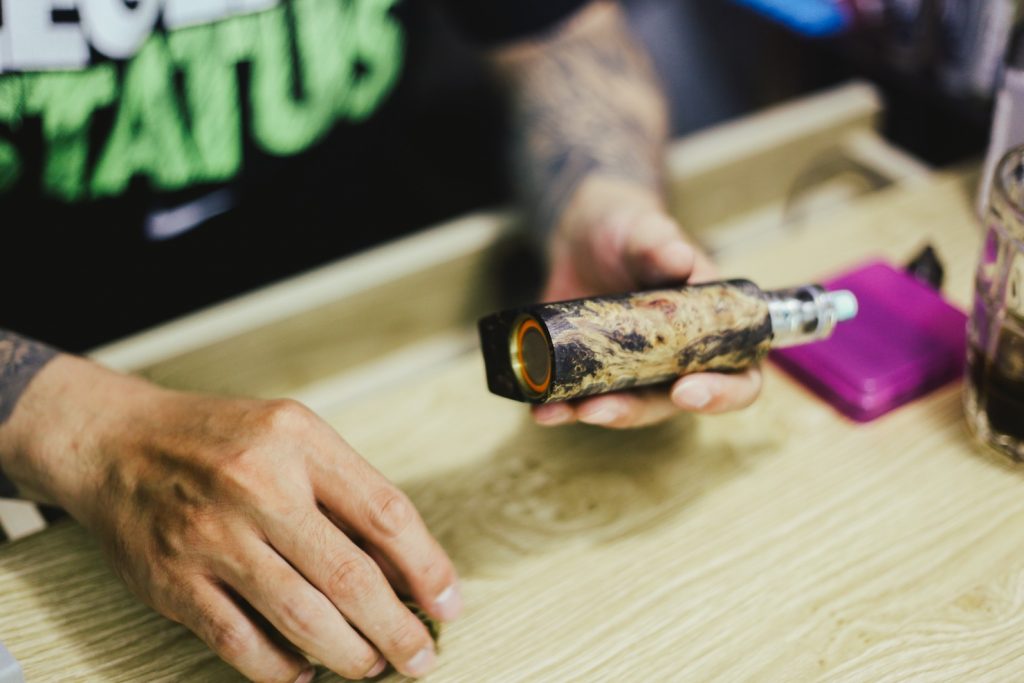 The free education and being generous with your knowledge, is a part of that culture?

Yea man, you have to share information to bring the community together. If there’s no community, vaping’s not going to survive in this country and the way that Vietnamese people are, seriously, there is not going to be a community. There’s always rivalries, there’s drama all the time.

There’s no community, and there never will be. I tried to like call the shops and we all sat down and they just bicker with each other. I’ve done that already, I even like want to have a vape show, like a vape expo in Vietnam because this summer I’m going to release an RDA, my own RDA. I’m doing it in the Philippines, I already have a guy I’ve been talking to, and we’re going to start making slab-wood boxes made in Vietnam. My 3D printer just arrived, yea I’m happy about that.

So we hope that something happens. Because look at Malaysia, all the shops are against each other but when it comes to the advocacy and stuff like that, they’re always together. Here maybe one day when the government puts regulations on it then the shops will come together, but I don’t think so. 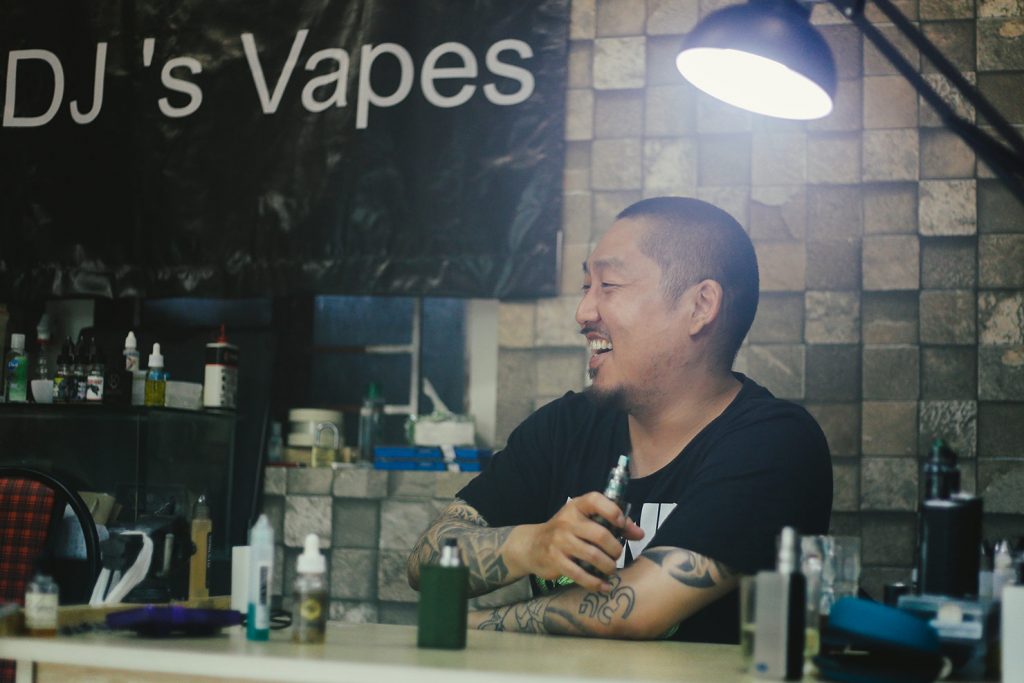 Is that part of why you prefer to be a smaller operation?

It’s more like I feel comfortable here, my initial plan was to open a shop in D5, but the local authorities said you can’t do it.

So we decided to open here because most of my customers are from Phu My Hung or D2, I will expand to this next room.

We are soon going to work with another guy who uses the same method and come out with a line made in Vietnam. So, that’s what we’re working on. Like a straight product that’s made in Vietnam.

A big thanks to Jon for the interview! For more info on DJ’s Vapes, you can check out their Facebook here. Do you guys want us to interview anyone else? Please let us know by emailing team(at)vietcetera.com