Christine McCharen-Tran is the co-founder of the feminist collective and DJ booking agency Discwoman. Besides Christine, the three-member crew includes Londoner Frankie Decaiza Hutchinson, who’s an artist agent that also handles public relations and social media, and New Yorker Emma Burgess-Olson, a techno DJ and producer known as UMFANG. “Combined, we’re like a Megatron,” Christine laughs during our meeting at the Vietcetera office.

Together, they exclusively work with women-identified and non-binary artists to help them break into the male-dominated dance music industry. The Fader magazine has called them “the nightlife savior we need.” 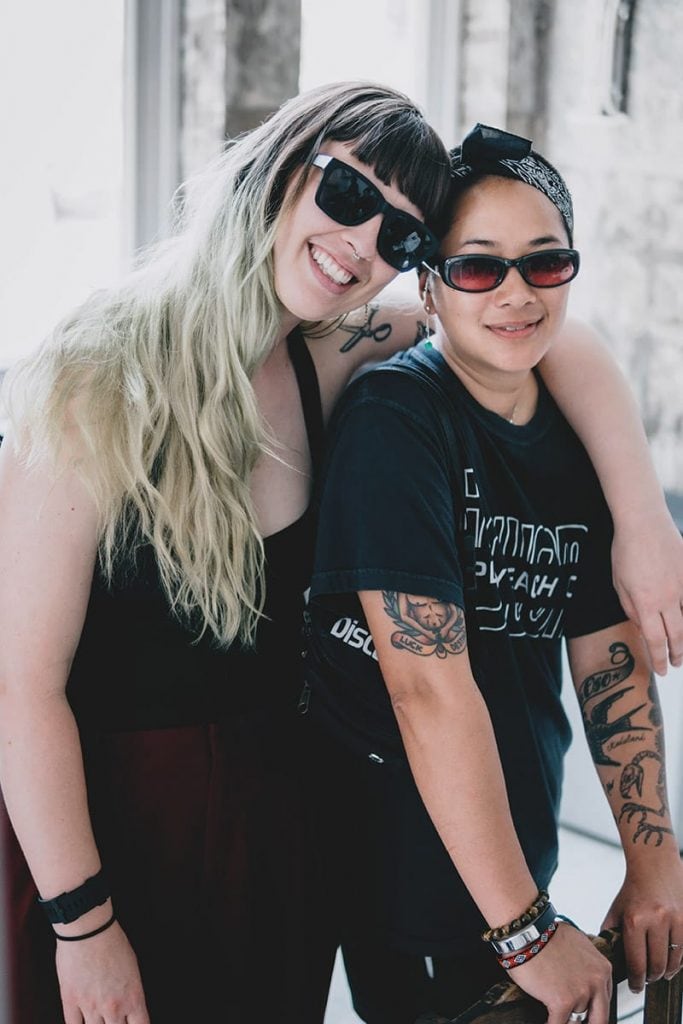 In fact, Christine’s parents both came from Saigon, although she was born in Virginia. And this is her first ever visit to Vietnam. Becca has joined her marking off the usual tour itinerary—Sapa, Hanoi, Ha Long Bay, and Hoi An—while exploring connections that might lead to Discwoman returning to Asia at the end of the year, “This time we did Vietnam my parents’ way—which was a good intro. Next time we want to do it our way which means we’ll bring some artists along and arrange a few parties.”

How did you combine forces to form the DJ agency and collective, Discwoman?

The original idea behind the agency was that women-identified and non-binary artists need to be paid. We want more in power. We want more on stage. But in the industry, there are these gatekeepers—the venue owners, the promoters, the bookers. There’s so much male infrastructure and there needs to be more women making decisions.

Frankie Decaiza Hutchinson and Emma Burgess-Olson were the ones that came up with the idea. Then they brought me in to help produce—I do experiential production for music festivals, parties, and even Becca’s runway shows.

Originally, Discwoman was supposed to be a one-off showcase that lasted two days. That was in 2014. We did the showcase. Then an interview. And it went ballistic. Cities would just hit us up asking us to do another showcase there and we formalized the company six months later. Now, in total, we represent eleven artists and we work with hundreds of others around the world. 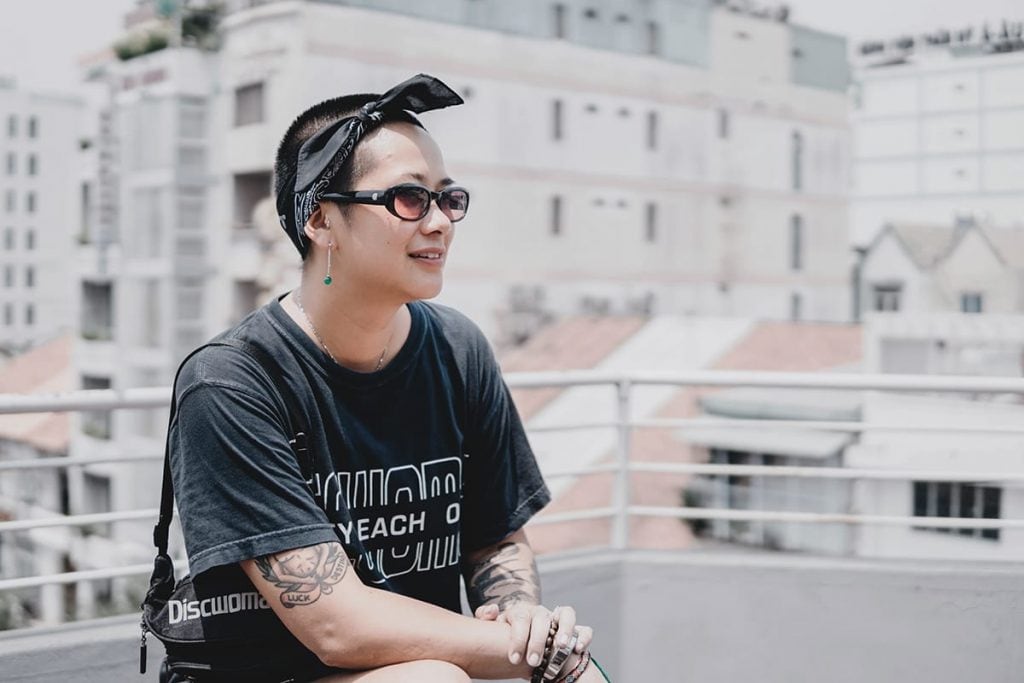 What helped your collective get traction so quickly? Which collectives have Discwoman aligned with?

We maybe got lucky by capturing the media’s attention at the right time. We constantly get messages saying how encouraging we have been to inspire new collectives and groups.

But there are so many collectives like female:pressure who existed before we started, and who inspired us. They created a huge digital database of female, trans, and non-binary musicians and artists.

What are the obstacles for women in dance music?

People say there aren’t many women DJs, but there are so many. It’s just people aren’t booking them because they don’t even know they exist. It’s been cool breaking that down in New York.

At festivals like Panorama and The Governors Ball, supporters have been blacking out the male artists on the event posters leaving the one or two women DJs on the bill to highlight the imbalance. At every party now, if there’s an all-male lineup, people will ask questions. Now, it’s almost embarrassing if anyone books a festival without a balanced lineup.

You throw parties all around the world. How do you integrate yourselves into those diverse dance music scenes?

Instead of going there and picking talent ourselves, we always work with local organizations who know way more than we do. We work together to put on a showcase with them; places like Club Chai in San Francisco and collectives like Brutaz in Poland. But we haven’t connected to any in Vietnam…yet.

How do you feel about the popularity of female-model and celebrity DJs?

There are so many representations about what femme identity can be. And that’s really the discussion we’re having beyond just saying “book a woman DJ.” I think there are so many identities that need to be celebrated. 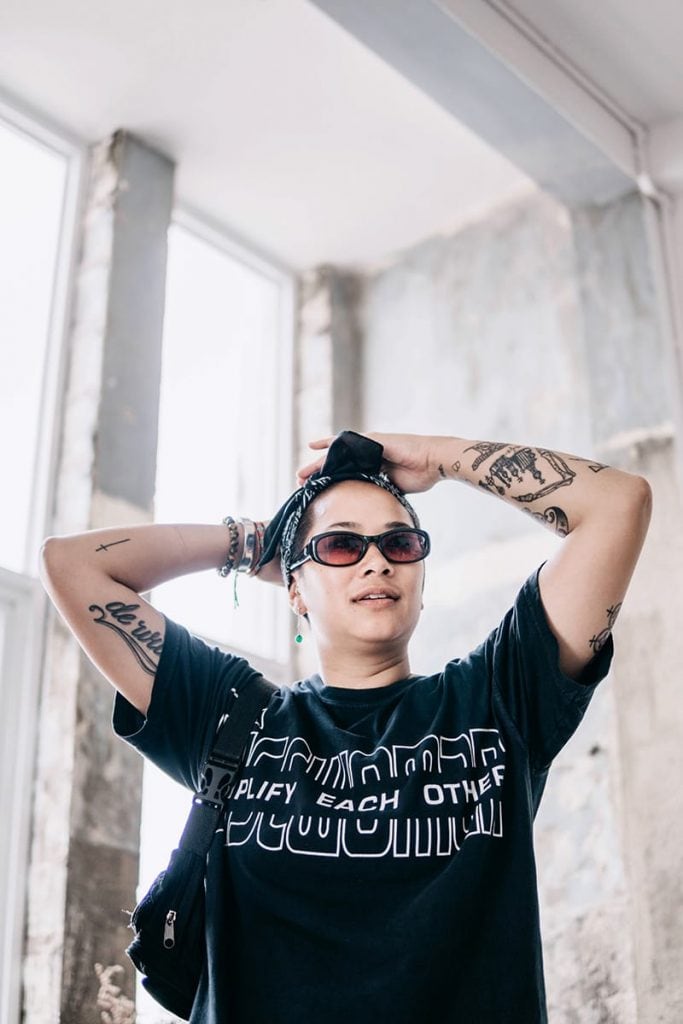 But we do celebrate a lot of underground artists. We try to move them into the mainstream getting them to play festivals. UMFANG is probably the best known right now—she plays Berghain often. When we first started one of our dreams was to play there. And a year later it happened.

How did you come up with your “Amplify Each Other” slogan?

It came from an event series we were doing in London, Poland, and New York. It was post-Trump, and we conceived it as a series of screaming workshops that were a way for us to come together in our own space.

In Queens, New York, we had this huge venue called the Knock Down Center, but only a handful of people showed up. We decided we didn’t want to scream, and so we just sat on the floor and listened to each other. That intimate moment of sharing and listening led us to explore the idea of what it means to amplify each other.

How do underground party scenes survive in the places you’ve been?

Every city has different laws. In Mexico City, we’d have to pay the cops to have a party in a parking garage. We have questions over whether we can put on a party in almost every city, even in the US. Even in New York, there used to be a Prohibition-era “cabaret law” that made it illegal to dance in some venues, although they’ve finally repealed it.

How would you compare the music and club culture in the different cities you visited? Which is your favorite?

People in this scene tend to be excited and enthusiastic about what they do. It’s more than just the artists, but it’s everyone involved. We’ve traveled to Brazil, Colombia, Mexico, Holland, Puerto Rico, Poland, and there’s techno everywhere with their own sounds and their own vibe.

But I love New York—it’s just so open to weirdness and freakiness. People joke that if it became illegal to dance throughout the city, we’d party in the sewers with the alligators.

Who are the most interesting artists you’ve discovered on your travels?

There’s Elysia Crampton who grew up in the Californian desert, but who has lived between the States, Mexico, and Bolivia. Her electronic music is really out there.

Juliana Huxtable is another of my favorites who I’ve worked with many times. She’s a multi-disciplinary artist who weaves spoken word into really abstract tracks that often evolve into techno. That kind of genre-mashing is something I really love—it’s an entire experience. Suzi Analogue, who is based in Miami, is also a favorite artist. She’s so talented. I think she’s the new Missy Elliott.

I also think Nina Kraviz is amazing. She’s a performer with incredible technical skills that allow her to play CDJs and vinyl in the same sets. She is usually the headliner, but sometimes she’s the only female on the line-up. I think she’s part of the conversation we’re having. She’s asking “Where is the next generation?” But not only that, she’s helping by bringing people like UMFANG in to play at her shows. 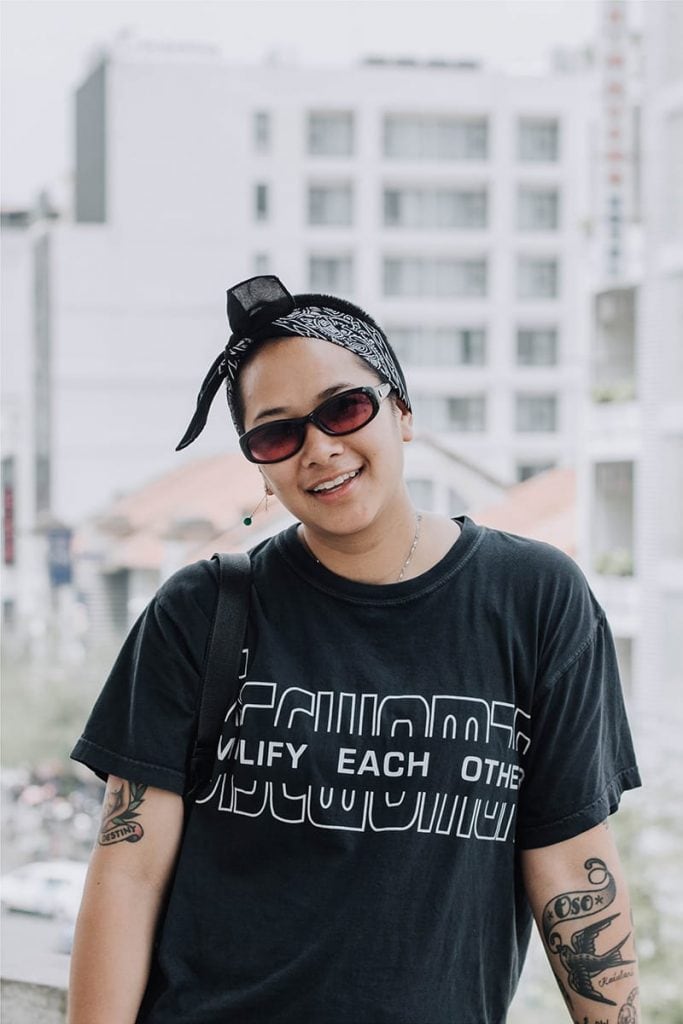 The name Discwoman flips the name of the portable Discman CD player. Which other obsolete music format would you like to bring back?

I’d bring back floppy discs. They were such a tactile thing with the slider across the top, and the way they ejected from the machine. Cassettes are also a big thing again. Lots of our friends do tape releases. It cool the kind of artwork you can do in that folded cassette sleeve.

Let’s throw a techno party in Saigon. We’re actually talking to some people in Thailand and Tokyo about coming back to Asia in November. We always bring a few artists with us wherever we go. And we’re up for anything—we throw crazy parties. We’d throw a party anywhere—in a key shop, or a car wash. In Santiago we did a crazy festival then did another party in a room just like this one we’re in.

Finally, how have your impressions of Vietnam on this trip compared to your expectations?

I had very little context for the physical experience of being in Vietnam other than the stories my parents told, and through seeing pictures from friends’ visits.

I knew it would be hot. But the food has been a biggest part of our experience. We’ve been travelling to each region and trying dishes like mi quang and banh beo. It’s made me very nostalgic. They’re all things my mom and grandma would make when I was growing up.

There’s mobilegirl in Berlin who’s known for her early-2000s R&B edits. Then there’s DJ and Producer Kim Anh in LA who’s like my Vietnamese sister. They’re both queer Vietnamese artists.