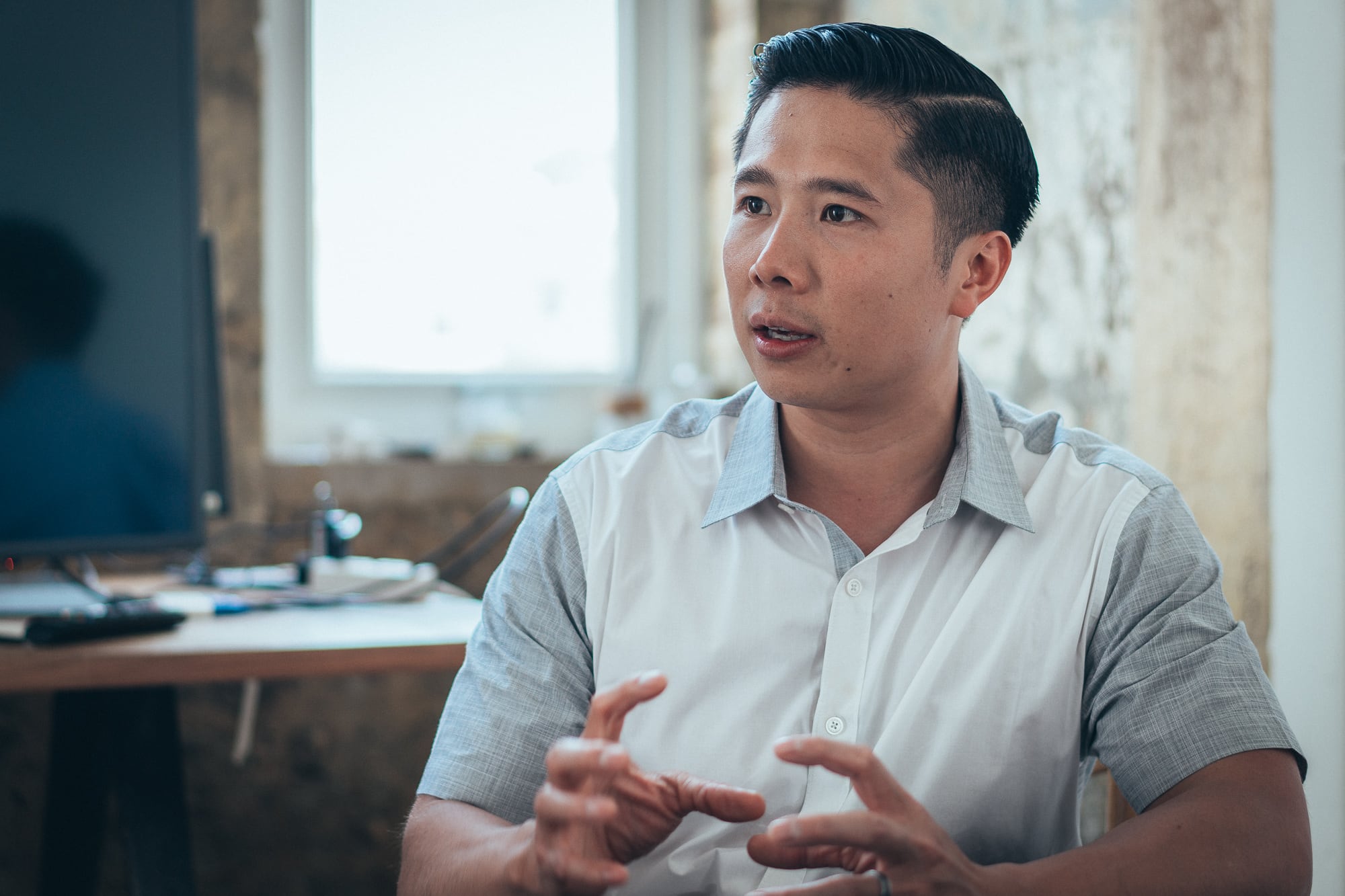 HaiSous Restaurant in Chicago’s Lower West Side was born of out of its owners’ “brilliance and resilience.” Thai Dang and Danielle Dang were forced to suddenly close their first venture, Embeya—an Esquire best new restaurant winner—in 2015. After a two-year hiatus, they opened HaiSous serving his elevated Vietnamese cuisine and her modern cocktails and curated wines at their restaurant in the arty, multicultural Pilsen district. In a year, HaiSous has received a Bib Gourmand from the Michelin Guide and reached the semi-final of the “Oscars of food,” the James Beard Best New Restaurant Award.

Regular visitors to Vietnam, the couple came back this time after chef Thai Dang was invited to cook his goi bac tuoc—a dish with braised octopus, confit eggplant, coconut cream, peanuts, shaved radish, and Vietnamese herbs—at the Streets Eats charity event. So we asked chef Thai and the restaurant’s mixologist and sommelier—and designer—Danielle over to the Vietcetera office to explore food trends in Chicago, and how it feels to be back in Vietnam. “I’ve always felt like I had one foot in America, one foot in Vietnam,” Thai Dang begins.

You opened HaiSous last year. How did you attract the attention of the Michelin Guide and the James Beard judges so quickly?

Thai Dang: I make elevated Vietnamese food. It’s not fusion, it’s really Vietnamese. My style is to take Vietnamese flavors and textures and apply French fine-dining techniques. Why does Vietnamese food have to be so pedestrian and rustic? Embaya and HaiSous grew from my dissatisfaction with the execution of dishes and the service at those kinds of restaurants.

Tell us about one dish at HaiSous that typifies your style of elevated Vietnamese cuisine?

Thai Dang: In Vietnamese cuisine we have a repertoire of salads. So at HaiSous, we serve goi du du—with young papaya, homemade Vietnamese beef jerky, cilantro, tuong ot. And goi so diep—with smoked bay scallops, pomelo, lime, shallots, and Thai chilli. But a perfect example of our style is our goi bac tuoc. Salads like this usually get dressed with nuoc cham, nuoc mam toi, or vinegar. I treat nuoc mam toi like a French mother sauce by creating different sauces out of it. We also do things like take the inner heart from young herbs and we fry our garlic and shallots from scratch.

Your restaurant HaiSous has a corner location. And the parking is in a school. It sounds supremely Vietnamese. Was that deliberate?

Thai Dang: Yes, and even the bamboo furniture in HaiSous was made by my aunt and uncle in Dong Nai; we found the plates in Ben Thanh Market; the silverware is also from Vietnam.

Who are your typical customers at HaiSous?

Danielle Dang: We get different generations of Vietnamese—young and old. And my father visits. He doesn’t know Asian cuisine, he doesn’t know how to use chopsticks, he doesn’t even eat Chinese food…but he loves Thai’s food. Something resonates within him. Our American clientele are the bread and butter of what we do. It’s not fusion food, but Thai translates his cuisine into something that they can all relate to—even my father.

Your award-winning previous restaurant, Embeya, had to close suddenly. Where did you get the restaurant name? Why was that popular eatery forced to close?

Thai Dang: We co-owned Embeya—meaning “the little one.” It opened in 2012. We chose that name because I’m the youngest of nine siblings. I have six brothers and three sisters. It was in Chicago’s West Loop area. We were voted the city’s best new restaurant, we were recognized by Food & Wine…and then it collapsed suddenly when our partner embezzled over a quarter of a million dollars from us. We picked ourselves up and opened HaiSous together.

Danielle Dang: The name HaiSous means “two pennies”—”hai” for two, and “xu” or “sous” meaning pennies or coins. We chose the name because that’s all we were left with—two pennies.

Which chefs had the greatest impact on the style of cooking you do at HaiSous?

Thai Dang: Undoubtedly chef Laurent Gras. We moved to Chicago because I had the opportunity to work with him—at L20. There, he was awarded three Michelin stars. Before that, he was the chef de cuisine for Alain Ducasse. By the time he was in his twenties he was in charge of three of Alain’s Michelin-starred restaurants. I also worked for Eric Seybold who was chef de cuisine for Thomas Keller at his Napa Valley restaurant, The French Laundry. Those guys made me think about how I could elevate Vietnamese cuisine.

What’s the recipe for your “pimp salt” that you serve with grilled ribeye? How did that recipe—and the name—come about?

Thai Dang: Pimp salt is a variation of the Vietnamese salt, pepper, and chilli mixture with a squeeze of lime or calamansi in it—muoi tieu. I used it at our first restaurant as a dip for dishes like the quail that I grilled with honey and garlic. I made the mixture and one of the chefs added his own label to the container. I looked and it read “pimp salt.”

What wines do you pair with Vietnamese food?

Danielle Dang: Sparkling wine goes so well with Asian flavors. But more interesting—and something we have a lot of fun with at the restaurant—is serving underexplored grapes like gruners and rieslings that there are often misconceptions about. Rieslings are a good example. People assume they are sweet but I will serve them a dry version that completely changes the dynamics of one of our dishes.

Can you give us your twenty-four-hour guide to Chicago’s arty Pilsen district?

Thai Dang: The building we are in is 125 years old. So there’s a lot of history there. The Richard Gere film “Primal Fear” was partly shot in our building. And the rapper, Common, and Emmy Winner, Lena Waithe, used our restaurant as background for their show on Showtime called “The Chi.”

Danielle Dang: There are all sorts of authentic Mexican flavors in Pilsen. Go to the “new American” restaurant Azul 18 for breakfast. There you can get great huevos rancheros. We do a HaiSous brunch Saturday and Sundays. And next door is our cafe, called Ca Phe Da—an all-day, late-night coffee shop that serves Vietnamese coffee, banh mi, beers, and cocktails.

There’s also Taqueria El Milagro who make their own tortillas. It’s round the corner from us. There’s also Carnitas Don Pedros. There’s a line outside that runs down the block every night.

Thai Dang: They have this way of cooking pork in its own fat, and they take the skin and fry it to make chicharrones. There’s a place that’s doing something similar to us called S.K.Y. that serves refined contemporary American cuisine. You can go down and dirty and get your tacos, or you can go there and get something elevated and delicious. For drinks after all that? Punch House Chicago. It’s in the same building as Dusek’s, which has a Michelin star. The building is called Thalia Hall. It’s a pretty cool spot where they also have concerts.

Which restaurants will we find you at during your visits to Ho Chi Minh City?

Danielle Dang: We always go to the Ben Thanh night market to a seafood spot called Hai Lua that has live prawns and crabs. Others try to copy what they do, but they kill it. Their produce is so fresh and they prepare it right in front of your face. Another place is Tiem Thiem Huy Mi Gio at 455 Nguyen Trai. It’s been there for a long time, but their egg noodle with duck is delicious.

What new discoveries have you made during this trip to Vietnam?

Thai Dang: We met the owner of Red Boat fish sauce in Phu Quoc, Cuong Pham. The company sell their export-only fish sauce to high-end and Michelin-starred restaurants. Cuong Pham wild-catches black anchovies—ca com—and immediately adds the best sea salt from Vung Tau to begin the curing process. Other companies preserve their anchovies in ice water after they’ve caught them, which draws out the fishes’ blood—which should be retained to provide more flavor.

Thai Dang: We lead a “Culinary Vietnam” tour with twenty guests on behalf of a travel company. We visit Hanoi, Hoi An, and Ho Chi Minh City where I even take them to my family home in Dong Nai to cook a meal for them.

Danielle Dang: When we were in Hoi An on one of these trips, we met the chef at Mango Mango, Chef Duc. It’s his second location—a riverside restaurant, bar, and lounge. He has an incredible story. He traveled around South America where he learned to make ceviche and other dishes, often working to pay for his stay.